By elboracho,
October 27, 2010 in Multihull Anarchy

Well, it took me a long time to get there, but today I raised the mast for the first time. Just a few more things to do before I finally can go sailing 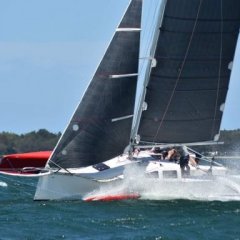 Great news, from my experience of Evil Gnome they are a great size boat and they really go hard. I don't understand why everyone is fighting over building f 22's  and f 33's when the F85 is

It's either been blowing 6-9 kts or 6-9 bft ( mostly the latter ) but yesterday I was able to have another sail in light conditions.