By The Weatherman,
December 10, 2018 in Ocean Racing Anarchy 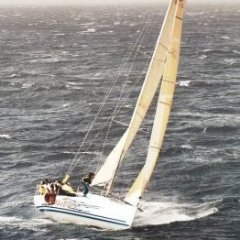 I can't believe you are all talking about Skorpios correcting out.!  They have no farkin intention to correct out.! Their "ONLY" intention is to win line honors and break records. Correcting out is fo

In the latest edition of Seahorse there’s an article about the CS125 and they go into a bit more detail about the boat. The Cfoil was chosen because as NZK said the owner didn’t want daggerboards thro