Good morning from Initiatives Coeur! All is good on board! It’s been a great run so far and we have already achieved a new record top speed for the boat - 34.2 knots reaching yesterday! The only pro

Yes owners, and often with outside investors for the value of the cargo. My grandfather re bought his grandfathers cargo boat and kept it in the family for outings. So I could sail before I could sw 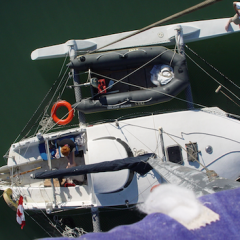 Will Harris' explanation of the western option: https://www.transatjacquesvabre.org/en/news/newswire/1366/will-harris-britain-co-skipper-malizia-ii-yacht-club-de-monaco