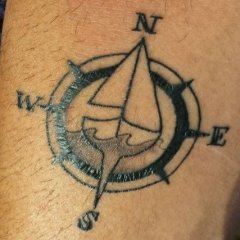 Could be sail trim or bagged out old sails too. What's the mast rake like too?

What ever happened to the notion that a rudder does nothing but add drag?  I know- take it to DA-

A little weather helm actually is faster! At about 3 to 5 degrees rudder angle, the increased drag is more than compensated for by sailing higher, so there’s your best VMG. Boats that are absolutely n