Excellence IN YACHT Design series episode no. 69 with HOT ROD 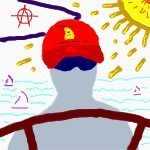