I may have discovered the new sailing-related social media moneymaking paradigm. It works as described in the title^^^

Remember the couple who sank their boat 2nd day out, then got crowdfunded for a few $K and a new 36' boat for $1?

This guy near-repeated their, well, what - journey/mistake/saga/other? - loses his boat on the beach, attempts 'recovery' for 5 weeks with no success, and yet winds up with a GoFundMe worth $8K and a free donated 25' Hunter.

A guy just pulled a classic case of this here on the beach at Ft Morgan Ala. Sailed out of Mobile Bay for the first time after coming down the Tombigbee Waterway from the Tennessee Valley and lasted about 2 hours in salt water. He never cleared the shoals at the mouth of the bay but turned eastward along the beach still inside the outer sandbars. He sailed about an hour inside the bar until that false channel faded away a couple miles along the beach and he dropped his sails and decided to anchor and maybe swim to the pretty white sand to take a walk! He didn't have his anchor shackeled to his anchor line and by the time he screwed around and found a shackle in the cabin and went back forward his anchor line had washed overboard. He dug out another anchorline and finally shackled his anchor to it (probably without any chain) and couldn't get a set but he was already in the shorebreak. He spent a couple days expecting his Facebook fans to come bail him out and then Storm Cristobal administered the 'coup de grace'.

Now he has been gifted a 23' trailer sailer, and bought from his Fund Me donations a $12,000 Siedelmann 31 and had enough left over to buy a nice Lincoln SUV! People went way overboard enabling him and he never salvaged the boat on the beach. He was assessed some serious fines by the CG and DNR but I doubt they will ever chase him down.

Yeah, maybe. Let's be honest- a donated Hunter 25 is sabotage, not assistance.

The Hunter deal fell through so maybe the guy is not as clueless as I first imagined...


Rasputin22 said:
The Hunter deal fell through so maybe the guy is not as clueless as I first imagined...
Click to expand...

I saw he had to go to Pennsylvania to get it (it was on an included trailer), I wonder if that's the reason...

Rasputin22 said:
A guy just pulled a classic case of this here on the beach at Ft Morgan Ala.
Click to expand...

I gave him a reminder that he needed to at least make an effort to clean up his mess on the beach from the first boat or the authorities might come knocking on his donated hotel room door to assess some fines. He got very threatening to me personally with threats to come knocking on my door in the middle of the night. He is back in Florida now but I am waiting to see how long he lasts with his donated boat. He actually started two Facebook fund me pages. One was called 'Gary's Emergency Fund' while he was still sleeping on the beach where his boat was coming apart and then he started a second fund when he started looking for a replacement boat. A couple of his Facebook readers reminded him that his fund me plea was to salvage or dispose of his wreck but he denies that was ever the stated purpose. I think he raised over $8000 between the two fundraisers but he indicated that some of the money wasn't being released to him. People are starting to figure his BS out. He seems to have pulled his dual fundraiser pages from his Facebook site but they are still up on his supporters pages. 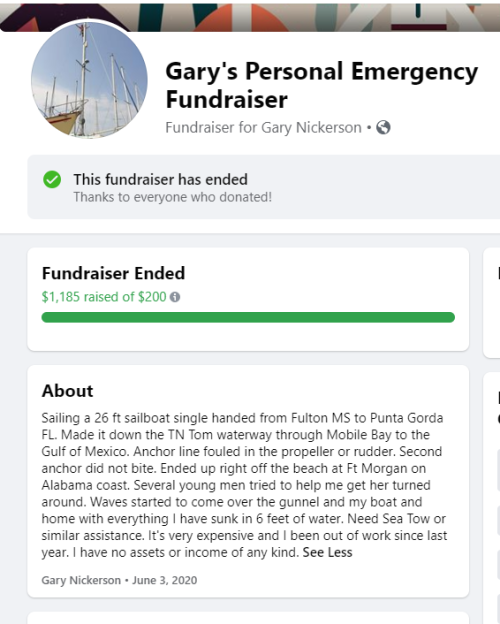 Here is some of his PR work!

A regular Robinson Crusoe he is!

That looks a lot like one of those drop traps used on stray &amp; feral cats:

It's possible someone else has set up that dinghy with 'cruising gear' to entice Gary inside. Then trap and neuter him, making sure he gets all his shots and is cleaned of fleas and ticks. Then a microchip is implanted and he is released back into the Alabama wilds.

T-N-R is the humane way to deal with incorrigible street cats.

No clue at all.

There is a clew, he just doesn't know how to use it.

First boat a Westerly Centaur! Even that twin keeled tank couldn't withstand this sort of cluelessness!

Boat gave her life for him!


Worse part is that his new puppy he picked up somewhere along the river fell overboard and he watched it swim ashore and he claims he was so busy 'navigating' he didn't go back for the poor dog. I think the dog knew what was in store for him and bailed out while the getting out was good! Then once he was shipwrecked he claimed to his enablers that he had people out looking for his dog for him!

Rasputin22 said:
He got very threatening to me personally with threats to come knocking on my door in the middle of the night.
Click to expand...

LOL...did you think you were going to get a different result?

Ajax said:
LOL...did you think you were going to get a different result?
Click to expand...

No, I was just trying to help him understand that you can just leave your boat up on cinderblocks like he might do up in the Appalachian hills and that the Beach Nazi's would take it bad if he didn't show an effort to mitigating his ignorance. I didn't put it quite like that but pointed out that any engine oil or fuel slicks would bring the wrath of the officials and homeowners in a hurry. Here is the result of the first visit by the Coast Guard and Marine Police.

$45K and a $55K threat for such irresponsibility. I kind of felt sorry for the guy at the time.

Per Day! I got a served a similar document down in the VI by the DPNR for a sunken boat and it was only for $10K per day and I'll tell you that got me off my ass! That boat left the environment in a hurry!

I am just doing this all wrong.

B.J. Porter said:
I am just doing this all wrong.
Click to expand...

Well marrying a brilliant, wealthy gynocologist sugar-mama is the next best pathway! :lol:

Though to be fair, no one was wealthy when we got married.

he saw it once that some great sailor somewhere backwinded the genoa to help the bow come around so as not to use as much rudder when tacking...