here is probably what can be labeled as "design porn" on this forum...In recent months I have carried out a couple translations for Mssrs. Chevalier &amp; Taglang, who have impressed the AC community in the late 1980s with their impressive study of the history of America's Cup designs (a 20lb book). They have published hundreds of works so compelling that I have collected them all: hundreds of exceedingly detailed analyses of yachts from the earliest Polynesian praos to the latest and most bleeding edge of the spectrum including the earliest publicly released lines of Team New Zealand upcoming challenger for the 2013 America's Cup. When he called last month for a translation, it concerned something that I had not yet seen: one of his own designs. Details below. Enjoy!

Publishing naval architect François Chevalier's original design for an out-and-out racer immediately reveals a great blend of today's most generalised trends for breaking speed limits as well as displays the author's great ability to look into the breadth of working concepts in yachting history and formalise a proposal that could establish herself as a capable prize winner, advocating the scow bow as tomorrow's cornerstone in building racing yachts. Mr. Chevalier writes: 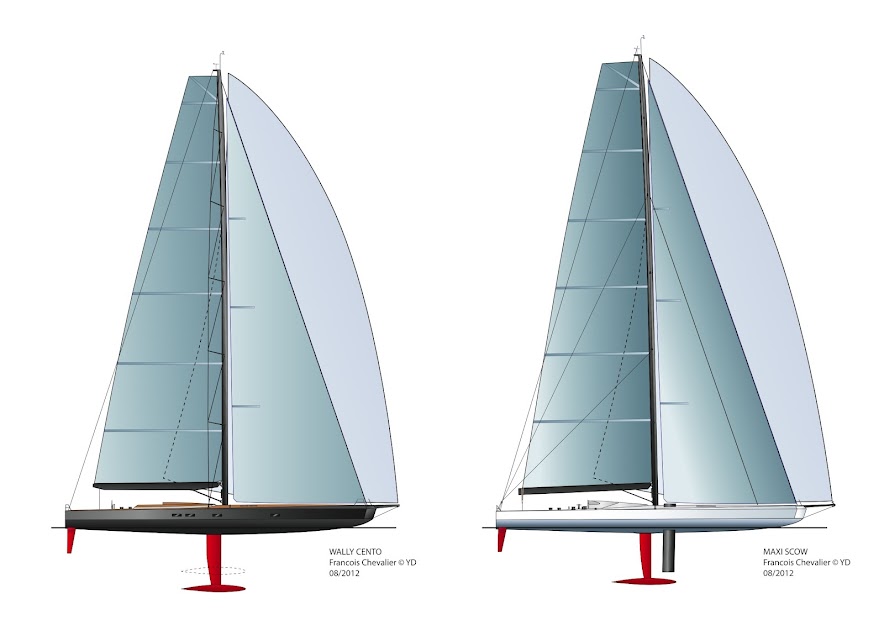 I had had early etchings for these two 100ft sailing yachts, which I named MScow, laying on my draftboard since last summer, together with a Volvo Open 70 and an IMOCA Open 60. When the Volvo Ocean Race announced that future editions would use a one-design, I decided to finalise the two 100ft projects: a WallyCento and a Maxi Scow. 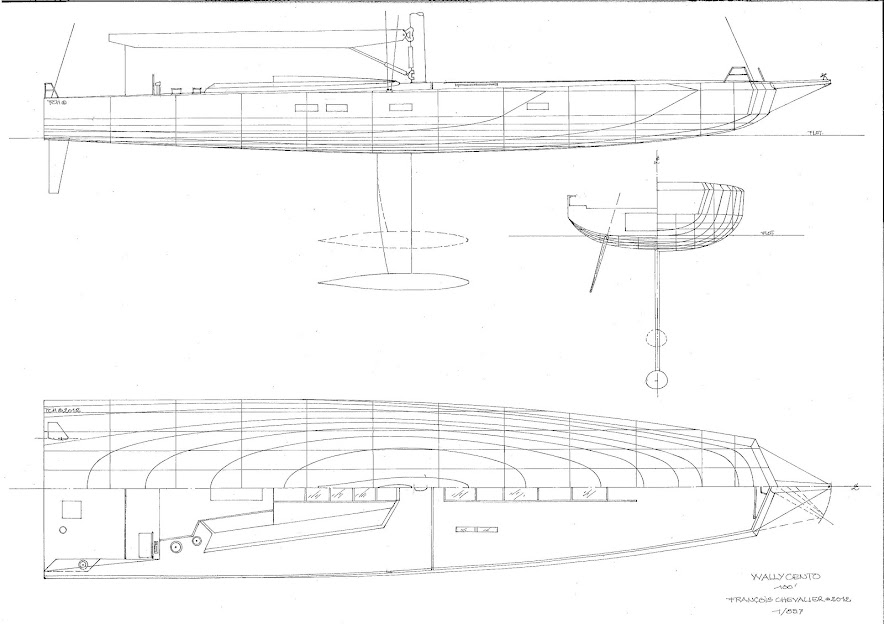 The reason to design yet another Wally lies in the designation of the WallyCento rule itself: owners remain keen on the combination of comfort, performance, modern design and bleeding edge technology in a yacht. Even if the WallyCento open box rule forbids canting keels and includes a minimum displacement figure, she remains true to the Wally essence which has begot its prestigious fleet: simple handling, automated sailing systems, utterly flush decks, light and minimalist interior spaces. 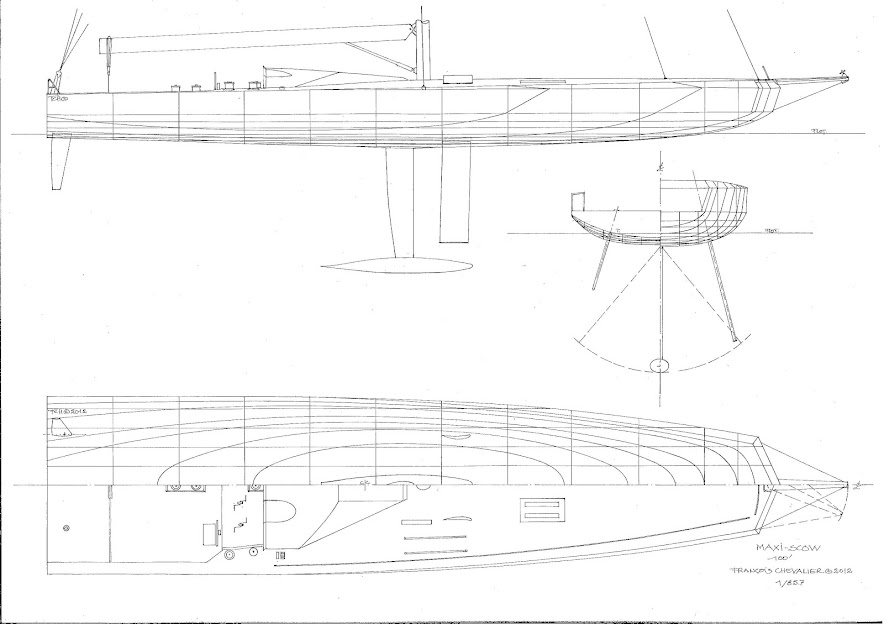 The "Record" designation of the MaxiScow version, which features a more lightweight displacement and a canting keel, rid of all the modcons and automation usually presented in Wallys, targets ocean records and line honours in crewed races such as the Newport-Bermuda, the Fastnet or the Sydney-Hobart.

As featured in the wetted surface diagrams comparing the MScow concept with conventional monohulls when heeling, the key advantage of the MScow is her underbody, which under a heel sails at an angle which would be three times smaller than a conventional yacht. On the one hand, the righting moment is a lot more efficient, whether or not she is fitted with a canting keel, and on the other hand, the keel remains in the centerline under sail: The result is the MSow's better ability in pointing to windward, by one or two degrees depending on configuration.

To improve the sailing platform's performance, the bowsprit can be orientated and the clew of headsails can be adjusted in the lateral plane.

On a level plane, the lines of the WallyCento and MaxiScow are reminiscent of a windsurfing board.

On a heel, the angle of the wetted line with the centerline is a third of that of a conventional racing 100-footer.

As far back as the 1970s, I made a concept for a crossoceanic windsurf designated for a double-handed Transatlantic race. As for many projects of this kind, the model is still hanging on my office wall. The idea remerged ten years ago when I wrote an article investigating the origins of planing hulls. The craze which governed the American skimming dishes at the turn of the twentieth century, with waterline length as the only limitation, had given me the idea to develop an IMOCA Open 60 for the Vendée Globe single-handed circumnavigation race.

I decided to develop a progressive chine-bilged scow, and instead of a pram bow, I proceeded to cut away the stem very significantly to avoid wave slamming as much as possible. By tapering the bow both in height and in width, shocks with head waves are dampened significantly and the scow skims the surface immediately and displaces as little water as possible.

How will she go in these conditions?

Esoteric stuff for my budget, but interesting nonetheless, thanks for the read. I will confess when we do big races on our little boat, we do enjoy watching the big boys go by...we have seen some pretty exotic boats (mostly the CYC Race to Mackinac Turbo class).


Sturdy as a rock - Straight to the bottom :lol:

Left Hook said:
How will she go in these conditions?


Hard to break that old girl

PIL007 said:
How will she go in these conditions?


True that, hat old maxi is that?

Brindabella in the tragic 98 Hobart race

We should get the Zenda boys to build one!


Everyone was saying the same sort of crap when the scow shaped mini came out but that thing has been doing very nicely against it's competition.

Icedtea said:
How will she go in these conditions?


Is it me or at about 30 seconds when she drops of a big wave you see the whole boat flex?

Just for the sake of truth, we had that on the front page before anyone else.

But then do not put this one now on front page as if this was the first maxi scow around
Click to expand...

The first Maxi Scow was INDEPENDENCE, designed by Crowninshield and launched in 1901.

Obviously a large scow is not an allround yacht, and certainly not perfect in "any sea state", but then again no boat is. The proposal is taking the scow paradigm and giving her all the elements permitted and suited to inshore Wally racing and offshore records. Tapering the pram bow is just a subelement giving her a slightly more versatile edge.

For those familiar with the Wally regattas, short inshore courses set in spinnaker sailing Mediterranean summer conditions, the WallyCento Scow is perfectly suited. For weather windows creating seastates suitable for testing the capabilities of the Scow offshore, she can certainly demonstrate her ability to gobble miles off the wind, and the faster she does it (the idea after all is to break records) the sooner will she avoid adverse conditions and head seas. The idea is a windsurf, not a wave slammer, but the size and the tapered bow goes a long way to make this a yacht which is conditionable to the ocean - with a definite edge for offwind.

But then do not put this one now on front page as if this was the first maxi scow around
Click to expand...

The first Maxi Scow was INDEPENDENCE, designed by Crowninshield and launched in 1901.

A row erupts when Bostonian Thomas W. Lawson commissions Independence as a defence candidate, even though he is not or has any intention, of belonging to the defending club, a requirement outlined in the Deed of Gift. The scow-type design performs embarrassingly, is too fragile and never a serious candidate. Before the Cup match had been decided, her hull is sold for scrap.

From my understanding, despite the structural and steering problems of the 1901 Independence, it was the serious argument between the NYYC and Lawson (not a member) over the terms to defend the Cup with the Independence which led the yacht being pulled out of the selection for defence (he refused to become a member of the Club or to put the yacht at the disposal of a Club member, that is why the campaign was stopped and the flaws of the Independence were not further corrected after the exhibition races). But what is certain is that the Independence paved the way to the next America's Cup and served as a basis for the development of the 1903 defender Reliance. And this scow, howevermuch described a freak by the critics of the time, was properly managed, well built with the rare advantage of hindsight, remarkably crewed, and proved to be a total success in her designated purpose. One could even call her beautiful.

Today, a keen yachtsman can build any manner of maxi to suit his ilk. While a scow would still be considered a very bold and very demanding project, shipbuilding permits more than just building a scow as a technological demonstrator, so if one has a mind to collect flags and silverware, due consideration must be given.