Without wishing to raise a complete shitstorm re an old thread, looking at this video, how can anybody say that the assymetric does not lift the bow? Look at the evidence:

1) the main and jib are tending to push the bow down (centre of effort above and forward of the contact patch, plus the curve of the main is more open at the top, so perpendicular of the sail surface (roughly the direction of lift) is down)

3) the centre of effort of the assym is probably 15ft in front of the contact patch - if it was pushing down, the leverage would be massive (try pushing the pole down at rest - it will need almost no effort to push the bow down - or at least that is the case on my 49er).

4) if it isn't the assym holding the bow up, what is - skyhooks?

you drop the sheet and the bow goes up...

CharlesA said:
2) pretty much all the boat mass and crew are at or forward of the contact patch)

You will find there is a reason why the boats have an outrigger that is up to 450mm (18") from the transom, it is so you can keep the bow up. Compared to upwind the crew are generally 4-5 feet further back. Early kites had a lot of lift but were slow and dangerous

constantly moving so I do not get caught in it.

I saw this video, and it is clear that they need trim tabs. My kidneys were cringing at the bouncing that red boat was doing.

What a ride. It is clearly a crew work boat on a really windy day. Wonder how long it takes to get them back up and moving?

1) You drop the sheet and the bow goes up or you ease the sheet and the bow goes up? If the former, then couldn't it be a case of the boat slowing down and then the bow coming up (like in a power boat - coming off the plane, the bow comes up as the boat is on the wrong side of the hump. If the later (easing the sheets), couldn't it be a case that an eased sheet a) creates more curvature in the wing surface, increasing lift (which is perpendicular to the surface) and B) moves the surface of the sail less vertical, so increasing the vertical component of the vector - ie a tight assymetric produces lift, but a looser one produces more lift.

2) as regards to the rotational moments - 18" rack behind the transom with two guys of 165lbs as far back as possible (lets call it an average of a foot) creates a backward (ie bow lifting) moment about the contact patch of 330foot pounds (or 495 foot pounds if they are both absolutely on the rearmost inch of the rack). The boat itself is about 80kg, or 176lb and is 12 feet long - assuming it balances about the mid point (6 feet), the mass of the boat exerts a moment of 1,056 foot pounds pushing the bow down about the transom.

Clearly, there is a bit more than just the transom in the water - if we rework the moments assuming 2 feet of the length of the boat is in the water (so centre of rotation is half of that - a foot from the stern, this broadly brings the gravity forces into balance - ie the reason (or at least part of it) why the crew moves back is mainly because the contact patch moves aft.

If I'm wrong (and I'm quite happy to be, but I'd like to know why), given the 15 foot or so from the stern to the centre of effort of assymetric, the vertical component of downforce if it there, must be pretty minimal.

CharlesA said:
If I'm wrong (and I'm quite happy to be, but I'd like to know why), given the 15 foot or so from the stern to the centre of effort of assymetric, the vertical component of downforce if it there, must be pretty minimal.
Click to expand...

really in those conditions you have to stand further back form where you'd like to, hence the jumping. the shortness/fatness of the boat means if the stem really digs into the back of a wave they really stop and load up. in flat water they dont pitch around as much as you stand further forward

that happy place where the sun always shines

how fast can they move? 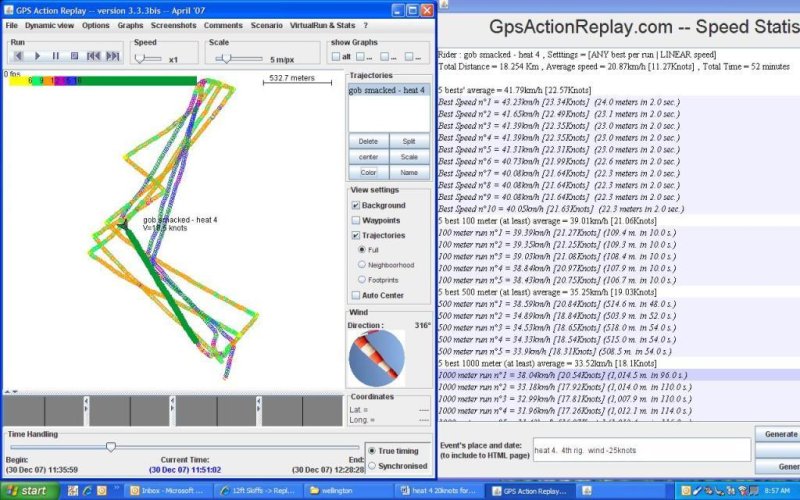 skiffe said:
This should get the x games generation interested!

Get a Red Bull sponsorship. That should do it.

Sailor Dave said:
This should get the x games generation interested!

Red Bull won't be in it I've tried!