100 foot limit relaxed, so no excuses this time

Do you know what the normal entry price is for 35iah foot boat?

No, but probably less than for a 100+ footer. It says in the link that the race was oversubscribed in 24 min, although that doesn't mean that the entry fee was cheap. Anyways my post was intended to partly be in jest 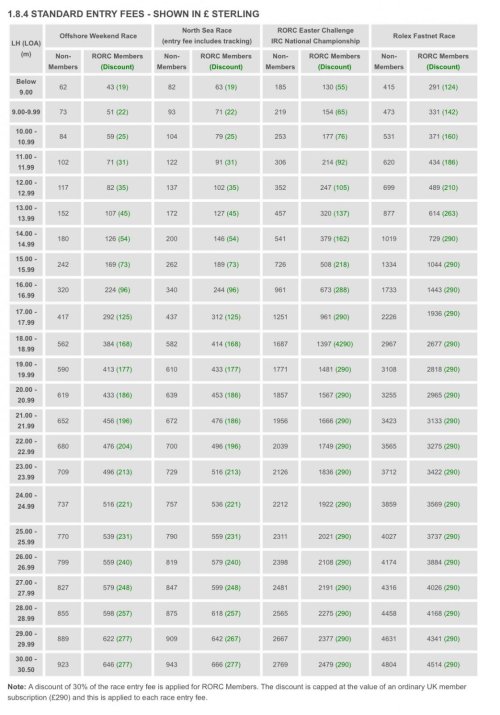 Who's planning on going? We're hoping to get a place a little earlier than the week before the race this year!

It as 24 minutes last year.

Curled up in the lee of Bum Island

Need to find a ride, now where was the Crew Forum, was it 3 or 4 doors down on the left...don't want to wander into Multi Anarchy accidentally!

Lucky the server didn't overload or something, entered in IRC3!

Anyone have any idea when the entry list will be published?

If RORC has not told you that you're in, then you're not.

Don't lose hope as there are a few boats that don't race or don't qualify in the end.

Will CQS be able to give Rambler a run?  Have they been able to start getting something out of that foil system?

the maxi 72s are doing the cope del ray ???  has the fastnet lost its panache ?

rfullarton said:
the maxi 72s are doing the cope del ray ???  has the fastnet lost its panache ?
Click to expand...

Not at all, only the odd 72 has ever come up for a Fastnet, and they are more and more optimised for Med conditions. On the grounds that it has sold out within a few minutes, and still has plenty of 'glamour' boats in it I don't think that RORC are stressed yet.

Potter said:
I don't think that RORC are stressed yet.
Click to expand...

RORC are billing it as the largest offshore race in history in the press releases at the moment. I guess as they own IRC they're a bit less focused on line honours and the big boats and more on handicap winner than some other races.

From the Rolex fastnet site interesting as Alex Thompson talks about his chances and how fast his boat is against the VO65's and Rambler etc:

"However they are up against the boats which finished first and second in the Vendée Globe, the winner, Banque Populaire, now sold and rechristened Bureau Vallée 2 and campaigned by partners Louis Burton and Servane Escoffier, and IMOCA 60 favourite, Alex Thomson reunited with his extreme-looking Hugo Boss which he is sailing with Ireland’s Nicholas O’Leary. Five of the nine IMOCA 60s competing are ‘foil-assisted’, none more so than Hugo Boss, which is now back with her full complement of foils following the Vendée Globe.

For Thomson, the Rolex Fastnet Race has played a large part in his sailing career. “My first was in 1995 on a Sigma 36 called British Eagle. It took just over seven days! But it was in that race that I found my vocation, and my love for offshore racing. That’s the great thing about the race - it introduces people to proper offshore sailing.” It was in the 2003 race that Thomson first sailed under the colour of Hugo Boss. It was on the strength of that event that has since translated into a 14 year sponsorship deal by the German fashion brand.

As to how Hugo Boss will get on this time, Thomson is obviously hoping to beat the other IMOCA 60s and is bullish about the potential of Hugo Boss to take on the larger boats. “Upwind, a VO65 will be quicker than us, but not downwind. And if you give us the right conditions (22-25 knots of wind, broad reaching) we can beat Rambler on the water: Genuinely my boat can beat the fully crewed monohull record, but in the Fastnet you don’t get to choose the weather you sail in.”

seems weird for the transpac and fastnet to be effectively competing with each other .. why arent they on alternating years ...