Three crew on board an 11 metre catamaran en route to Bermagui had a dramatic rescue today after their vessel, purchased just days earlier, began taking on water after hitting a sunfish 13 nautical miles east of Green Island near Ulladulla.
The crew of the catamaran sent out a Mayday at 1255 and activated their EPIRB, climbing into two dinghies to await rescue.

Marine Rescue Ulladulla rescue vessel UL30 was responded, and with guidance from a Royal Australian Navy helicopter from HMAS Albatross that had been deployed to assist, and the signal from the crew's EPIRB, quickly located the striken vessel. The Naval helicopter remained after their arrival with life rafts ready to drop should they have been required.
Arriving at the stricken catamaran just after 2pm, UL30 took the crew of three on board and then delivered them safely back to dry land at Ulladulla, with all on board safe and well.

A securite is current for all ships in the area advising a navigational hazard from the sinking vessel at 35 17.427 South 150 46.656 East.
The crew on UL30 were Skipper Lesley Kelly, Warwick Haslam, Mark Squires, Clive Woodward and radio operator Allan Dean and Watch Officer Keven Marshall. 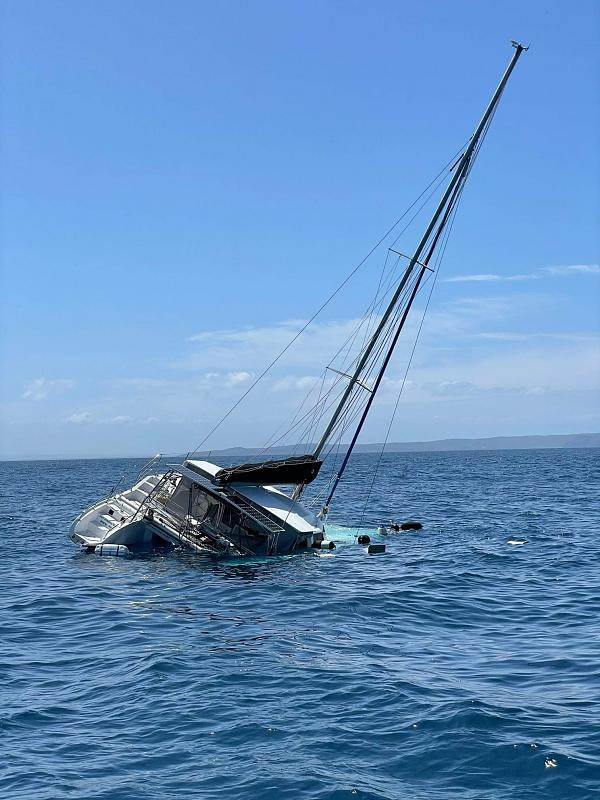 Probably a salvage.  Reasonable chance it won't sink for a while if only one hull's holed.

DickDastardly said:
Probably a salvage.  Reasonable chance it won't sink for a while if only one hull's holed.
Click to expand...

Bit of a worry if a Sunfish can take out a Catamaran.!

terrafirma said:
Bit of a worry if a Sunfish can take out a Catamaran.!
Click to expand...

Especially one that looks like they were motoring, must have taken out the rudder

That is one bad ass sunfish!

It was onboard Blackjack. Positive case. And the reason why she wasn’t in race

solas Big Boat Feed up but down now it seems. Hope they sort it before the start.!

Law Connect threw that race away. Scallywag had a shocker start but got a 2nd chance and took it. Whisper amazing for a fixed keel 60' leading all the mini maxis bar Wild Oats X.

Only unvaccinated would need to quarantine, but you have to be vaxxed to race.


So you test before leaving. Let’s hope CYCA have something set up for that.

Then coming back that’s up to your state.

turn it upside down and you have an affordable place to live in syd.

DickDastardly said:
Probably a salvage.  Reasonable chance it won't sink for a while if only one hull's holed.
Click to expand...

Surprising how low it ended in the water..... it capsized ..... and yes, no watertight bulkheads or protection against this...?


terrafirma said:
Bit of a worry if a Sunfish can take out a Catamaran.!
Click to expand...

A guy up the central coast reckons he found the rudder meaning it fell off up the track and they may not have known.....
Why didn't the tow the boat in on the day of rescue...?   That cost the insurance company as now it's a total right off... Not to mention it was a hazard to other traffic out there.... Bad memories of XL2

Livia said:
GRS is just checking with the CEO.
Click to expand...

Well he certainly doesn't check with the Owner before launching an attack.......

Is there any full race video footage for the ‘21 SOLAS Big Boat race?

Spreader Boots said:
Is there any full race video footage for the ‘21 SOLAS Big Boat race?
Click to expand...

terrafirma said:
Scallywag the fastest rating 100 and the slowest at the same time.! What gives..?

Where did you find those handicap ratings? I am interested.

Probably on the CYCA race results page for the maxi championship.