Didn't Holiday have a great TransPac in the early / mid 60s?

tizak said:
Didn't Holiday have a great TransPac in the early / mid 60s?
Click to expand...

Think that was the Holiday II, an early Cal 40, with sleddog and a group of then youngsters sailing really, really well and winning.

Thanks - I was aware of Holiday II doing well back then but thought I recalled something about the L-36 also doing well prior to the Cal 40. Time for more Googling.

sleddog said:
HOLIDAY was our first family boat and, in 1954, the first L/36 launched.  (See May 5th post on this thread.)  If anyone knows current whereabouts of HOLIDAY, would love to know.  As for the name, our father was fond of saying, "nothing goes faster."
Click to expand...

Holiday Too went on to win the Congressional Cup (LBYC) with many of that same group of yutes aboard.

Thank you, SE.  Yes, HOLIDAY TOO, Cal 40 #24, won the '67 Transpac with the youngest crew to date, and then the '68 Congressional Cup.  These days, as RADIANT, she is beautifully restored and lives at LAYC under capable and loving ownership of Fin Beven.

As a fun aside, back when the story and film MORNING LIGHT was being planned, I received a call from the film director asking for our '67 crew birth dates.  I refused unless he told me why he needed to know.  He refused, and I refused.  I didn't learn until later that Disney would be trying to make a documentary about the youngest crew to ever win the Transpac, his handpicked crew aboard MORNING LIGHT.

Some more of Kenny Watts’ Egyptian Cotton.  Dug up from the bowels of the shop.  I have a lead on the current owner of the boat, and I will likely return the sails to the boat! 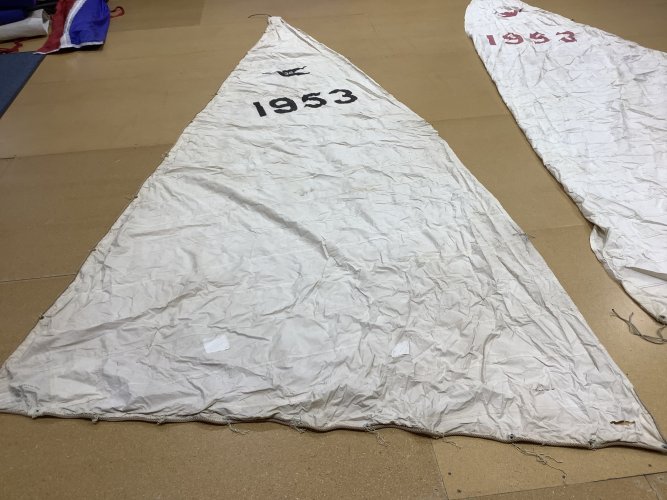 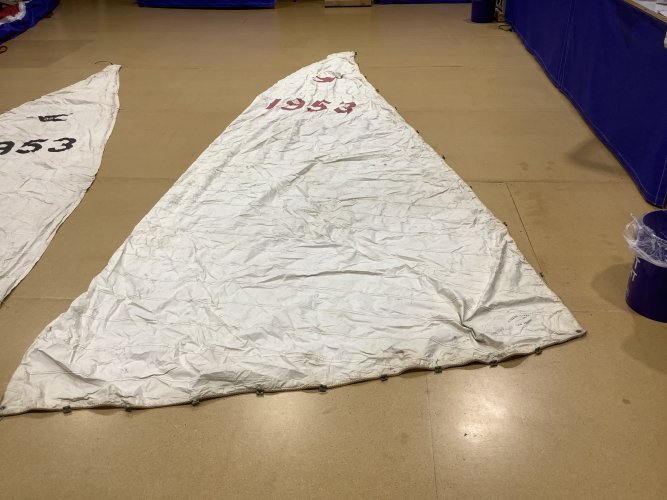 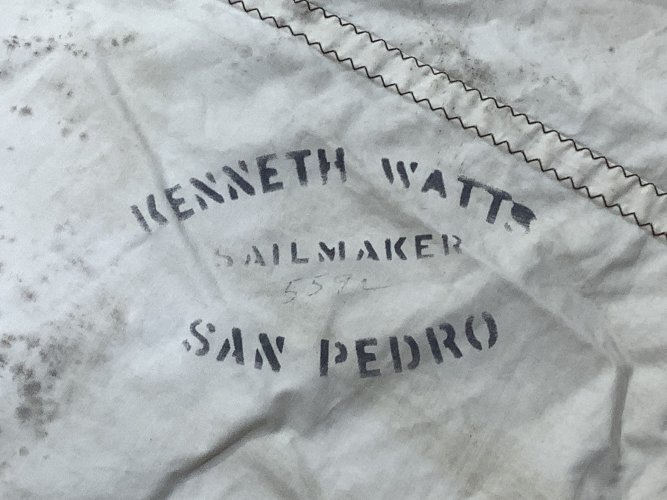 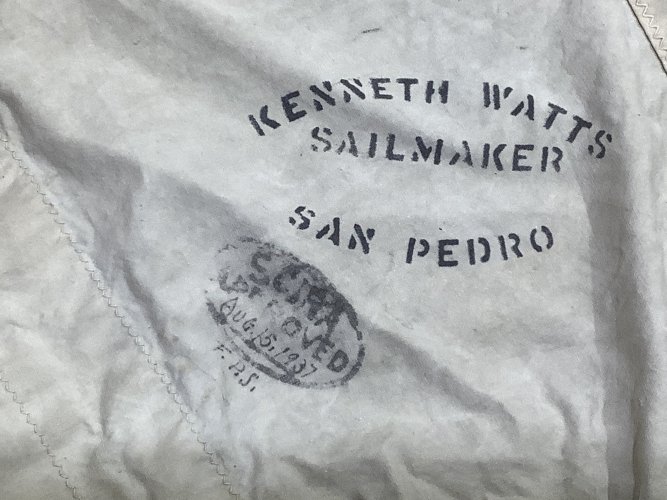 My Classic '39 International Fourteen has a full Watts Cotton Inventory from the same year. Miraculously, the sails are in great shape.

No pics of the sails but here is the boat. 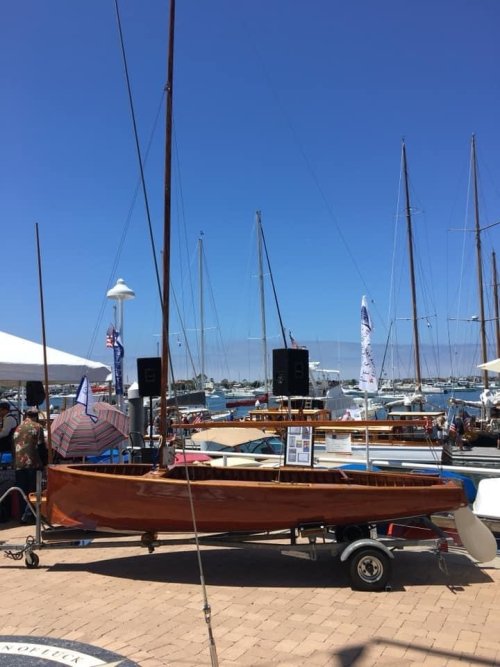 As a child growing up at ABYC in the 60s, I remember at the big regattas seeing I14s and thinking that they looked like little Thistles.

Watts were THE sails to have back in the 50s and 60s. We had both Kenny and Burke Sawyer sail with us on several boats in S.F. Especially in the early days of Big Boat Series. They and the Barient team were busy from sunup to sundown many days when the series lasted a full week. Barient team even replaced a coffee grinder setup on, I think, Laura (sailed by Briggs Cunningham) overnight one year.

Also sailed a good deal with Bruce Humann who was with Watts at the time the loft was shifted over to Sobstad (later Quantum??). Great guy with a perfect name for the times he screwed something up - "sub-Humann". He later went to work for some farmers who were into pumpkin seed style powerboat racing. First he did some computer work for their farming activities and then created a dynamic engine analysis program for their racing outboards. Turns out he was good and a NASCAR team put him to work tweaking his engine program for their cars. As far as I know things went well for him from there.

unShirley said:
As a child growing up at ABYC in the 60s, I remember at the big regattas seeing I14s and thinking that they looked like little Thistles.
Click to expand...

The Thistle was created by Sandy Douglas of Ohio in 1945. He was building 14's well before that. Sandy wanted to make a larger 3 man boat so he scaled up the lines of Uffa Fox's "Alarm" I-14 design.  He was instrumental in building these boats in mass production with the Hot Moulded Plywood technique. Before that, the boats were built with Cedar carvel planks and internal ribs with the cotton caulking in the seams. This proved too costly and time consuming to build in production. By the mid forties, he was later able to pump out the Hot Moulded hulls in large numbers building up the I-14 and Thistle fleets.

Above is one of the original American Carvel Plank Fourteens. Grandfather of the Thistle. Her racing days are over but she still enjoys winning at the beauty pageants. 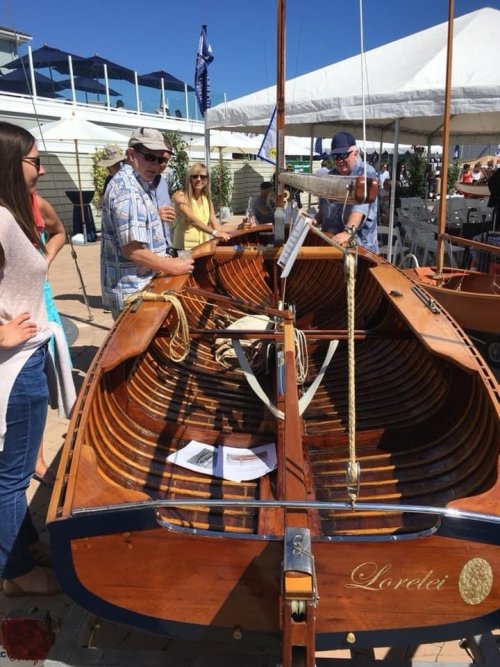 I wish we could somehow bottle your knowledge... I am certain that you are correct about Madden &amp; Lewis. Unfortunately, it was before I was born.
Click to expand...

Note:  The only woman on the class list is "Mrs Oscar Sutro".  Gotta love the casual misogyny of those days.

(Also: That's a pretty solid SF name she had working for her there.)

sleddog said:
PHM, you are exactly correct.  Peggy Slater, with her flaming red hair, great strength, and sailing skills was one tough lady and match for anyone  Peggy, member of a long time sailing family, began sailing at age 3 and never looked back. By 13 she was skippering small boats in local San Pedro races.and at age 28 launched her red hulled K-38 VALENTINE.  Typical of Peggy, VALENTINE had a chrome plated bronze cherub figurehead whose wings wrapped protectively around the bow.

As well as being a professional sailor and racer, Peggy was naturally good at teaching sailing and selling boats from her brokerage, especially to actors who were looking for an escape from the stresses their careers. Her most famous sale was assisting Humphrey Bogart in buying his beloved SANTANA, a 55' S&amp;S yawl from actor Dick Powell for $50,000.

In the 1951 Transpac, Peggy Slater was sailing master aboard the 73' cutter L'APACHE when a crew member went overboard when a lifeline failed.  It took the crew of L'APACHE 11 minutes to douse the spinnaker and staysail and engine started.  Peggy and crew got L'APACHE backtacked on a reciprocal course and returned to  within sight of the MOB  who was only 200 yards away, but unfortunately did not sight him,, though he could see the main mast of L'APACHE with a crew member at the spreaders looking.  This entire MOB story is one of the Transpac epics, and happy to report the MOB was recovered after 29 hours in the water by a Navy destroyer escort.

Though Peggy Slater loved singlehanding, especially with her irish Setter, she had never singlehanded across an ocean. Peggy Slater loved all things Polynesian and always had a tiare flower behind her ear. In 1963 she built her beautiful home at Wainiha, just north of Hanalei Bay on Kauai. Until her death in 1990, being a singlehander herself, Peggy welcomed Singlehanded Transpackers. More than a few SHTP skippers stayed at her lovely bungalow.

In 1978, after the finish of the first SHTP, Peggy told me this story while relaxing in her garden.
Peggy had always wanted to sail solo to Hawaii and anchor at Hanalei Bay on Kauai. In 1964 she sold her Kettenberg-38 VALENTINE, and in 1965 took delivery of a new, bright red, VALENTINE, Kettenberg 43 #9. The intention was to sail the new VALENTINE solo to Hawaii, something she was very capable of doing at age 47.

Peggy departed San Pedro for Honolulu June 30, 1968. She had an uneventful passage until entering the Molokai Channel 17 days later. There, in a squall, she went forward to douse her genoa and was pitched overboard, along with the sail. Fortunately Peggy was secured by a harness and tether. Unfortunately, she was dragged alongside, smothered in the sail, for approximately 11 hours.

Half drowned, somehow Peggy rallied and was able to climb back aboard VALENTINE. With a broken wrist, and badly bruised, she made her way below and called the Coast Guard. The CG responded. But suffering from her ordeal, Peggy could not tell them her position. In those days there was no Sat Nav, LORAN, or GPS. Strictly celestial and Dead Reckoning.

Honolulu Coast Guard was able to get an approximate RDF (radio) bearing on VALENTINE. "190 degrees" said  the CG radio officer. In those days, for liability reasons, the CG could only give out their bearing to your ship, not the reciprocal course you might assume to sail to safety.

Peggy did not know this. In her weakened state, she set her windvane to steer south, away from Honolulu and safety. And went below to rest. After two days, friends become concerned for Peggy. She had disappeared. A private plane went in search. It's pilot, and great credit to him, had listened to a recording of the CG transmission, and figured out Peggy's possible confusion. He flew down a 190 bearing from Hono.

Amazingly, 400 miles south of Hono, the pilot sighted VALENTINE. A Japanese freighter was diverted, and Peggy was taken aboard. She was then transferred to the Coast Guard Cutter MELLON, who went in search of VALENTINE. Again, amazingly, VALENTINE was located and towed by the Mellon 400 miles north to Honolulu.

In our conversation, I could tell Peggy, a proud and experienced sailor, was sensitive about this rescue. But she smiled, and said, that she was "likely the only one to ever finish a Single Handed Transpac underwater."

Peggy continued to live aboard VALENTINE, sharing her time between San Pedro and Kauai. She was active in supporting women's sailing, when it was still in its infancy. In 1990, while arriving for a speaking engagement at the Women's Sailing Assn of Marina del Rey, Peggy Slater died, age 72, of a massive stroke.

Thanks for the stories about Peggy.  She was good friends with my Uncle Ernie,  Uncle Ernie flew over from Honolulu and took my brother and I down to meet her at her office.  She sent us down the dock to meet James Arness on his boat.  The well known actor made us lunch and talked boats with us for over an hour.  It was my introduction to sailboat racers.