I will mention your door idea to the team on Sunday Zoom meeting. Thanks.

The owners will sleep on the V berth double. It is 6'9" wide at the head. They want room for the dog to sleep with them. It's a very nice dog, same breed as my two dogs, PWD's. I sleep with mine also.

Will and I stay in close contact. He's enjoying life in Anacortes. He'll make a name for himself one day. I do what I can to help.

Here is Will at 15 wearing Spike's clothes. He had flown in from Panama in the fall and was freezing. Quality young man. 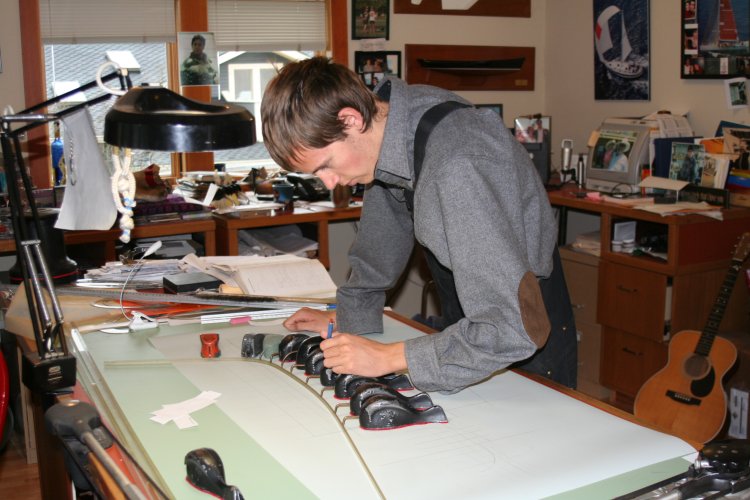 I think the effectiveness of the Max Prop in reverse has more to do with the fact that the blades are symmetrical. Most pros have asymmetrical blades that favor the forward gear. They suffer in reverse because they are not designed for reverse.
Click to expand...

Quite possibly. I have a 22" Autostream prop on my boat and it STOPS when you put it in reverse. The blades are symmetrical.

Having had both MaxProps and Autostreams apart on the bench I have to rate the MaxProp as inferior in engineering and adjustment of pitch but whatever, they work fine.

We had an Auto stream 3 blade feathering prop. It worked and no issues.

The zincs were overpriced but you could take a cheap  Max prop zinc, drill a hole in the center and it would work.

The pitch adjustment worked easily and I did it a few times underwater.

Did you consider any other rig type given the air draft requirements?  Ketch?  Or maybe a sloop with more roach and no backstay with headstay tension not so important (motor to windward)?

The kid looks like he had his ducks in a row back then. Glad you were able to give him some time…and some of Spike’s clothes to warm up and feel at home!

In a word, no. Look at the drawings. Where would you put a mizzen? There simply is no reasonable location for a mizzen given the layout of the boat. Simple as that. A ketch was never discussed or considered. I had a really cool, arrogant comeback for you. But I reconsidered. Must be old age.

Yep, my wife did  double take when Will came down the first morning wearing a Spike shirt and bib overalls. But I had told him to help himself to Spike's clothes. She got used to it.

Fred at PYI is well acquainted with the engine we are using. It is my hope that no further pitch adjustment will be needed once the boat is launched. That's been my experience with Max Prop. When we did our prop testing we started with PYI's pitch setting then took it up one notch and down one notch for both 2 and 3 bladed props. In both  cases we found the PYI initial pitch setting to work the best. 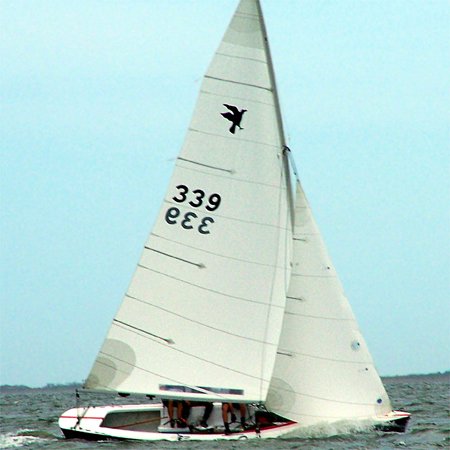 Bob Perry said:
Here is Will at 15 wearing Spike's clothes. He had flown in from Panama in the fall and was freezing. Quality young man.

What a great photo!

My old boat had a 3 bladed Maxprop and kicked sideways if you goosed the throttle.  Great for turning round in a tight spot, provided you went to port. The new boat has a 2 blade Maxprop and almost no propwalk. Old boat had the shaft at a pretty steep angle, the new boat, much less.

That information means nothing without a description of each boat. The design of the boat has a huge effect on how the prop will perform.

What kind of boar was your old boat? Fin keel? Full keel?

What kind of boat is your new boat? 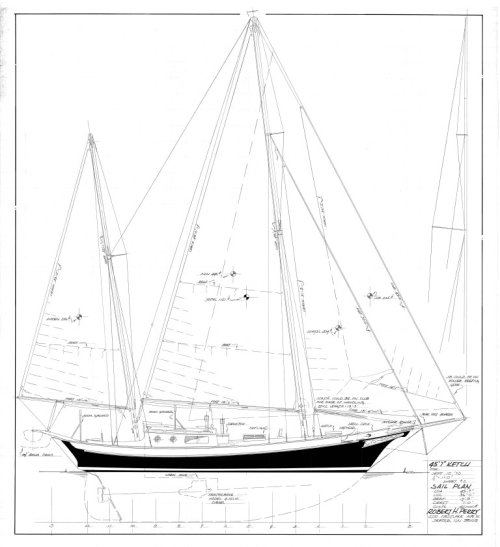 What’s with the Raven shot? Cool speedboat for sure… 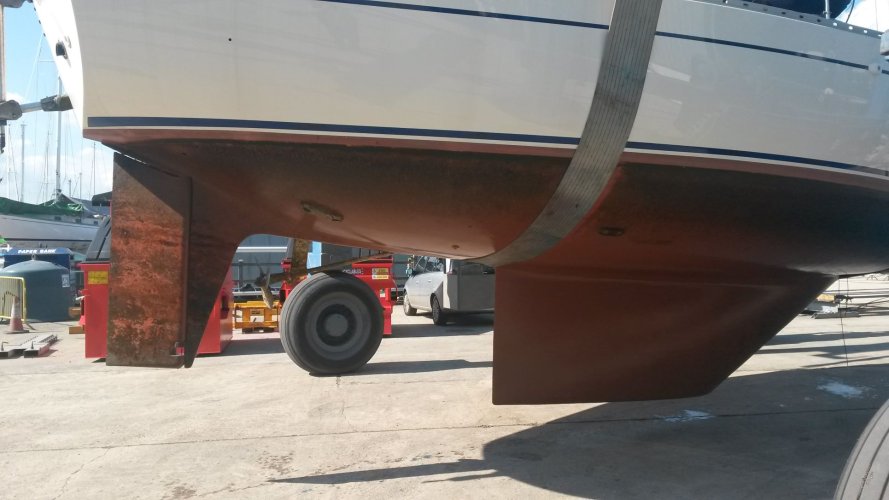 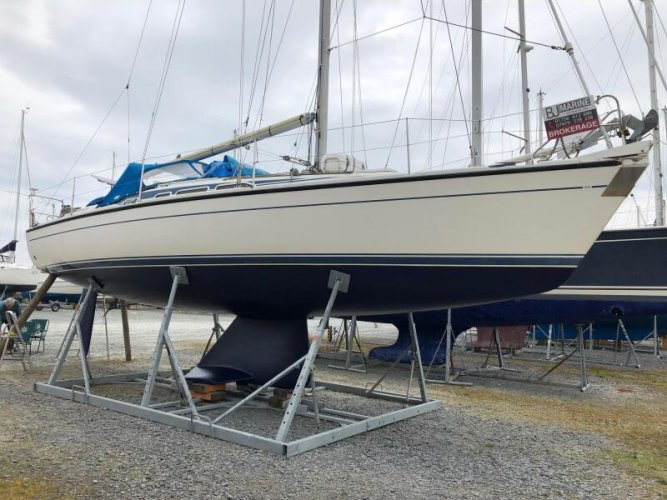 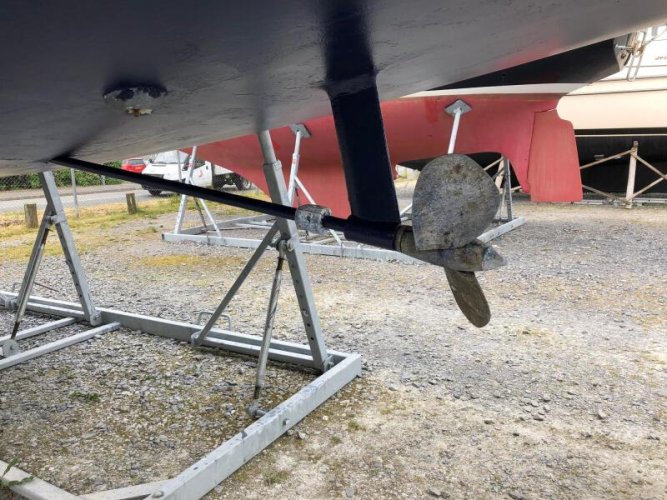 Ya I think the prop walk is mostly due to shaft angle.  More shaft angle means more twist component about the vertical (z) axis, tending to rotate the hull about z.  I have a similar issue with a higher shaft angle, plus my hull is a Hood whale bottom which might accentuate the issue when in reverse with thrust from the prop- you can see in the pic attached how there is likely unbalanced prop wash when in reverse. 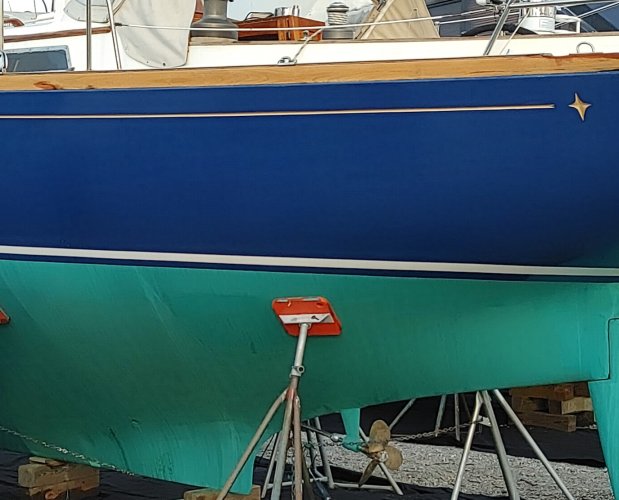 Sometimes I look for a photo to add some window dressing to my post. I came across that shot of the Raven while surfing my photo collection the other day.

The Raven class is near and dear to my heart. I crewed on a Raven for a coupe of years when I was in high school. We had a six boat Raven fleet in Seattle that actively raced. That boat was a hoot to sail in a breeze. I probably learned more about sailing in the Raven than any other boat. Owner would let me take it out by myself. But he died when he was 36. First friend of mine to die, Bud Stantorf. Truck driver and dog sled racer with a team of all Norwegian Elkhounds. When YACHTING mag had their annual One Design regatta, with one boat representing each class, the Raven was the fastest boat for several years. If you did not count the big scows. 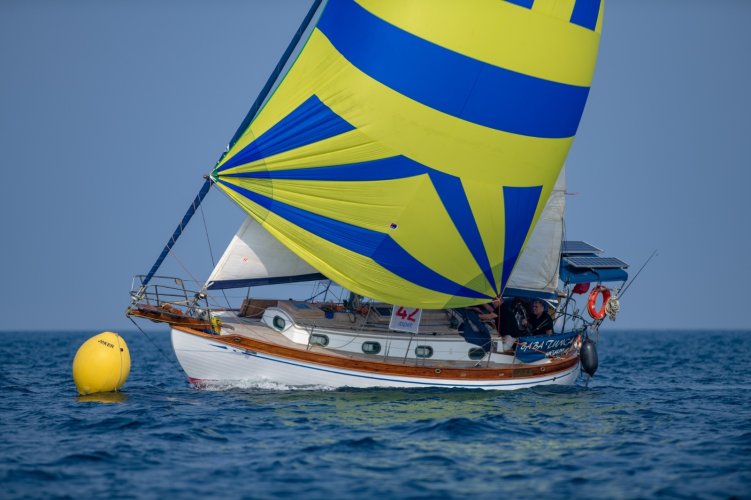 longy said:
Not to criticize, but hull form/rocker/keel profile look a lot like the old Cal 46. Please - was Lapworth that good? Or is this just the result of the same basic parameters producing the same shapes? Are the sections also similar?

Once you overlooked the fact that the deck/cabin were 4-5" off side to side, the 46 did it's job admirably
Click to expand...

There was an extra station on one side of the hull. A shipwright friend of mine was working for Jensen at the time and was tasked with striking the waterline on hull # 1 after it came out of the mold. He went round the the boat marking off the stations and one side had one more station than the other. He thought he had miss measured and redid it with the same results.  Did it a third time and it came out the same.  And this is why most Cal 46’s have a handful of 50 lbs bags of cement outboard in the salon bilge.

In a word, no. Look at the drawings. Where would you put a mizzen? There simply is no reasonable location for a mizzen given the layout of the boat. Simple as that. A ketch was never discussed or considered. I had a really cool, arrogant comeback for you. But I reconsidered.
Click to expand...

I fully get that the client didn't want a ketch, so no reason to consider it. Quite right.

But if they would have wanted a ketch, could the mizzen not have come down on the longitudinal centreline of the saloon table? Would have resulted in a relatively large mizzen compared to the main, but given how often ketch rigged boats sail with just jib and mizzen, that's no bad thing.

Sure I'm probably missing something, but seems do-able.

Just a very basic sloop rig with a low SA/D. In boom furling main. ICW friendly "I". Nothing special.

That looks a boat which could make good use of a gaff rig.  Low centre of effort, and optimised for offwind work, both of which suit the hull.

But if the client wants pushbutton sails, I guess a gaff is a no-no.

Looking at the keel, something to think about wrt how any predecessor performed:

Flow, even as ideal flow, is dominantly spanwise  not chordwise. The issues are avoiding a bound separation bubble on the lee of the leading edge from too fine a nose,  and stabilizing and binding the low pressure vortice that forms from spanwise flow firmly to the lee of the keel, ( AKA vortex lift).

There are improvements that can be made over a standard NACA foils. The only real benefit of using a NACA shape for a low aspect keel is to offer some leading and trailing edge fairing.  Sometimes a NACA foil works well but sometimes it can be problematic. That’s not trivial to predict and is dependant on the entire flow field hull included.

In real world observations, and from research into low aspect keels; the NACA section nose is too fine and the aft end is not full enough for what’s probably best termed “reliable” performance for a low aspect foil once you get to 10% and less.

That’s not to say that the high aspect foil section won’t work, just that it can sometimes be problematic.  For low aspect it’s better practice to have a rounder nose and a fuller body aft than a long NACA shape.  This can be achieved easily enough by using a 40% parallel mid body.  To do that: take out the 40% length and fit the widest NACA 00xx foil in the space left then split at the widest point and insert the parallel mid-body.

It certainly won’t be detrimental in any way whatsoever and can provide significantly more lift and lower drag closer to the wind and also eliminate deleterious changes in helm balance on the wind.