shebeen said:
couldn't see this being queried and it came up in the Laser/5o5 thread so had a query on it.

Firstly, cool graphic, i like it and the vertical is easy to see from Portsmouth ratings.. BUT, what's with the power?

is it direct sail area?

looking at the horizontal axis in terms of power from left to right we have:

doesn't make sense to me, what am i missing?
Click to expand...

OK, I have worked this out.

1stly, there are no fudge factors, its super simple maths, all above board, no emperical input.   No personel judgments.

The size of the oval is also prorata in that say a 29er spinnaker is a bit bigger than the working sail area, where as a Cherub spinnaker is a lot bigger, so it gets a bigger oval.

Re power, if you work out available RM, then go work out SCP and then put SCP/all up weight you get the power position.

All of that has been discussed before in these (SA) pages, so suggest you go digging into that if you need more clarity.

Was worried about runs for a second there, then realized you just weren't finished spreading yet.
By the way, any particular epoxy you use for that coat?(Just understood non blushing epoxy is a thing...)

allweather said:
Was worried about runs for a second there, then realized you just weren't finished spreading yet.
By the way, any particular epoxy you use for that coat?(Just understood non blushing epoxy is a thing...)
Click to expand...

BTW, not a single run, we (Alex) applied the material with a foam roller and I came along behind him and "tipped it off" with a 100mm wide brush.     Very satisfactory process.

We put on as little as 1.5kgs of material, it's a much thinner epoxy, smells very different, still made by Peerless Ind Systems, 2:1 system.

We are very likely to get the topsides vinyl wrapped, just some really cool graphics available doing that.   But the bottom, could well be this matreial polished up!

I'm told they use is on the mess floors in Mining facilities, with some non-skid added. 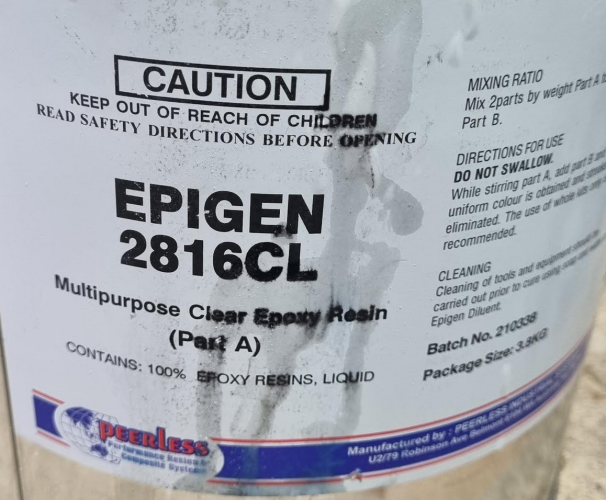 Also busy making winglets, this is the 2nd suck (per winglets, it's actually the 3rd suck).

Made what is effectively a huge 5m long 1.8 (cir) condom and slid it right over the whole job and just sealed it at the end.   pulling the full 80% Bar.     Hopefully we will get another 5 sucks from it, which will finish the job.   Alex could not believe how simple it was, it just worked. 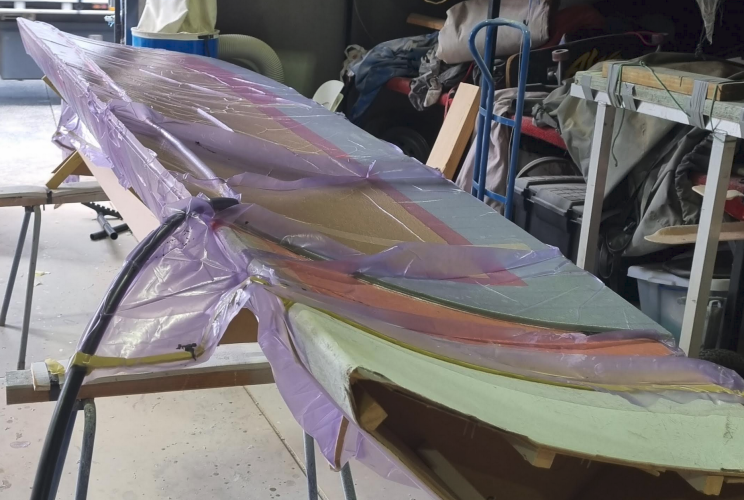 Thanks for the name drop, just read through the data sheet and looks to be pretty neat stuff. A bit less(no VOC) hazardous. 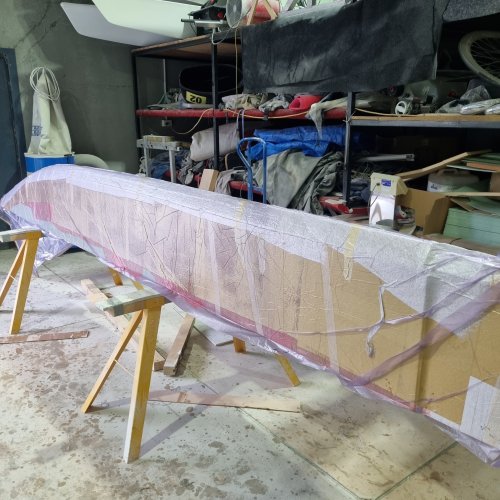 Really tough de-plug, quite a few swere words, lots of broken stick (as you can see) had to use the old rope trick and an hour of pushhing and pulling and de-sticking but it's off and it tough as old boots, fits on the boat fabulously. 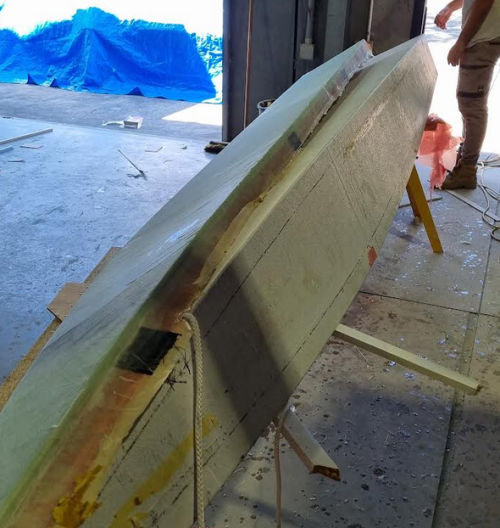 This is the stb side, pt side is in the AUS oven outside under the blue tarp, that is thankfully the last big suck of the project, the rest is easy.

Tad heavy, but it is what it is and I anit building another.

JulianB said:
had to use the old rope trick and an hour of pushhing and pulling
Click to expand...

That picture looks like that too. Hat off, stuck parts are a nightmare.

Do you reckon anything in particular did it, or just the relatively flat surfaces?

The flat surfaces release simply, it was the curved surfaced that where problemetic. 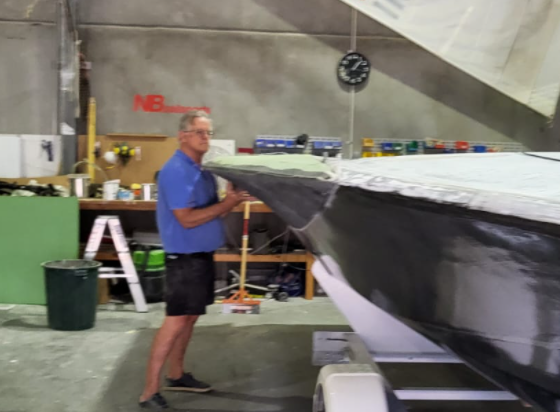 Late July, early August off the Arile, and then onto Magnetic!

JulianB said:
The flat surfaces release simply, it was the curved surfaced that where problemetic.

Late July, early August off the Arile, and then onto Magnetic!
Click to expand...

Now that you're standing there for some perspective, it really starts to look so much bigger than I thought it was.

I was just thinking the exact same thing WCB!

Julian, pardon the thread hi-jack but I'm looking for some info on something you had written some time back on sharpening the edges of the chines in Tasars, 49ers and 29ers?? Whats the truth/rational behind this?

MPH said:
Julian, pardon the thread hi-jack but I'm looking for some info on something you had written some time back on sharpening the edges of the chines in Tasars, 49ers and 29ers?? Whats the truth/rational behind this?
Click to expand...

OK, starting with the first point, planning boat.   Everything planes if you push it hard enough, even a Farr40 down the face of a wave can get to 20+ knots and it's planning, but it may happen 0.00001% of the boats sailing life so to optimise the boat for planning is a bit stupid.      Even a 49er or a 18teen is planning probably less than 1/2 its life, think about tacking, going up wind, which is 75% of any boats life, going through a lull, light air, etc etc etc, to fully optimise even a 49er for planning would be a little stupid.     So basically we make the front 1/2 of the boat a upwind hi speed displacment shape and the back 1/2 planning.

That segways nicely into the second point, Chines, 49er has them starting behind the centercase, and that works because a 49er has a lot of power so it can be optimised for higher end speed, where as a Tasar with less grunt needs chines running further fwd to get a good release, so it's chines start a little infront of the centercase.   As to sharpness, a pencil round is approx 4mm radius, I think it was Marcus Baur (GER) who took his 49er in the early days and I'm guessing but sharpened his chines to well under 0.01mm radius.    He had to "dull" them because the class did not allow it, (now, not so much dose allow it, but policing the rule became impossible, so it's not policed).

How sharp depends on the boat, the surface loading and again segwaying into the next point the sideways component of the waterflow.   Some speed boats have the water turning more than 90° with hi loading and not enoug power, and I am sure there is a magic angle, plus power boats use strakes and the faster ones use steps.

But going back to the sideways component of the flow. 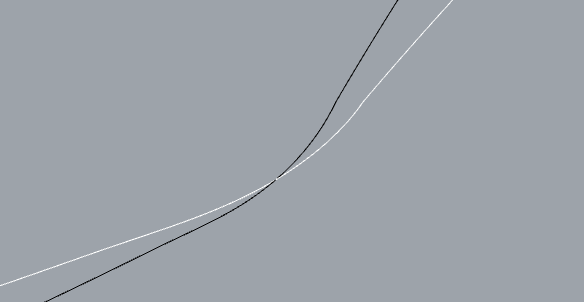 This is a crossection of the chine of a 29er, the 2 lines are at exactly the same point of the boat which is where they interest, black line is at 90° to CL and white is at 45° (aft) of the CL, (then turn to be the same as the black to get a comparrison)  So the more angled your flow the more important it is you sharpen your chine.    The angling of the water flow softens the radius.   49er we have at only 15-20° at normal planning (mid to hi 20's) speed.   The faster the 49er goes the finer (so 10-15° to CL) that flow will become so the greater the importance.

But at higher speeds you need less "change in angle" to get a release, and you can also get a release via a change in medium, so we use to use to different polishes on the 18teens and we also famously did it on a Laser back in 1978 (Kingston (CAN))with Poly-go-blue and Canadian Starbrite.   Again speed boats use steps and strakes.

You can go to your kitchen sink and do this experiment with a soup spoon and water out of the tap.

If you go up one stage, you tape that spoon to a stick (18" ruler) and get a pencil as a pivot and you can actually get lift (or suck, another segway) and quantify it.

If you really want to get carried away you can minic the sideways flow and the flow speed by using a garden hose with a upside down boat, which is exactly what Simon Watin did with his thesis (2008) on this.

Final segway, the suck, so a boat like a Laser and I mention a 470 because I did a series of tests on a 470 on Lake Como back in 2016 so I have the graph, as they start to plane and as the flow starts to get a sideways component, initially its a large angle, 60-70° and as you go faster it becomes less then as that water turns up the bilge it sucks the boat down into the water, so it makes it harder to "release".    Again, go to your kitchen sink to verify all of this.

Last graph, and this is emperical (except the 29er which is deduced) dated June 2016.

To pull a 470 through the water doing the same speed takes 33-34kgs of force.

Boats are similar weight and similar length, sure, huge difference in grunt, but that's not relevant in that we have enough grunt to acheive the speed, so it's irrelevant.   And yes other things at play but at this speed bows are well clear of the water and this was a tow test scenerio, so a lot of this has to do with chines and their sharpness.

The graph is infact incorrect for the purests, once you are fully planning, so in the case of the 470 probably around 8-9knts, 29er would be the same, 49er a bit higher speed, the load become linear so a straight line back through the origin (0,0).  You can see that with the 29er.     49er it has not "rolled over" yet, 470 has rolled over too far or something else is happening.

49r is amazing. I brag about this thread to my friends about the quality of theoretical and empirical information available on the net  Please continue.

Kenny Dumas said:
49r is amazing. I brag about this thread to my friends about the quality of theoretical and empirical information available on the net  Please continue.
Click to expand...

JulianB said:
The truth is that if you want to sail a planing boat then the sharper you make the chine where the water changes direction from displacment mode.... the faster you will go.
Click to expand...

Amazing post, learned as much from this post about chines as some of the sections of your dad's book for high performance sailing.  Appreciate it.

The boat in its new home "amount the gum trees".

Probably be in and out of here for the next 2 months. 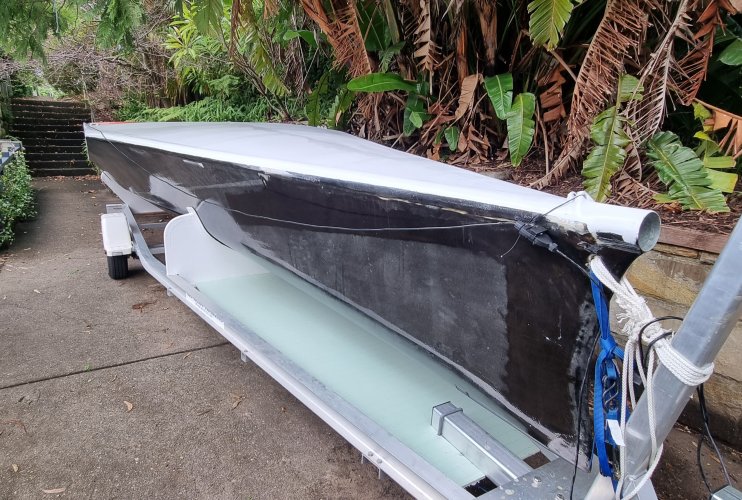 The 89 er looks great I commiserate with removing  curved panels had the same problem with my last moth .

.Sailing a 29 er or 49 er is always so positive with no hump to overcome uphill. Now I will have to sharpen the chines on the back half of Owl . That was expected !!!

Foil moulds in the front yard, the fun begins! 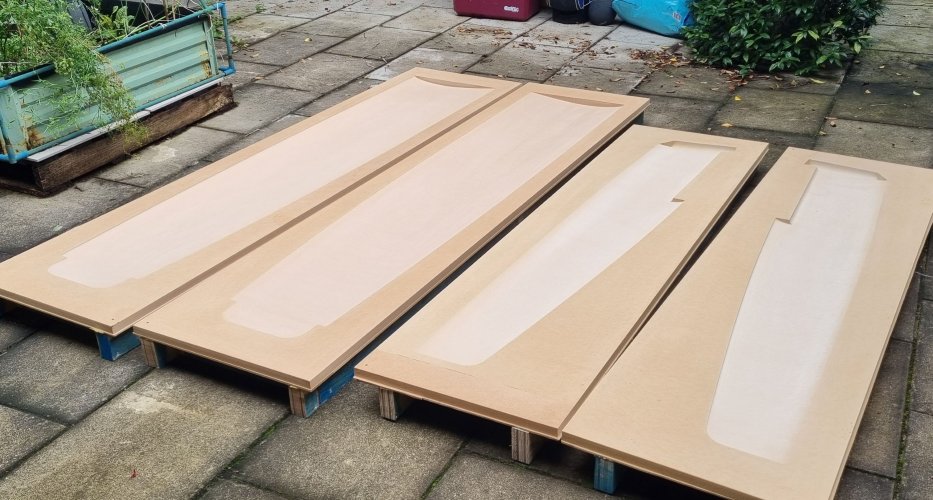