9m trimaran - El Toro © Ben KellyHere's something very new, as such... However, in the 60s, another bunch of avant-garde enthusiasts pretty much did the same. Now their product also took its inspiration from the male bovine. They even gave the Muira wonderful little styling cues to really cement Lambo's triumphant arrival into the supercar scene, with the cheeky eyelashes turning heads, and placing exclamation marks everywhere it went. Yet there was another you had to be specifically looking for, and all the while it paid homage to their very origins on the land, as the tractor builder made good, duking it out with the biggest and best in the business.​

Tri it on all right!

So our nautical 'El Toro' is a 9m trimaran, which is obviously in reference to said bovine, for front on, it too has more than a passing resemblance. The band of passionate sailors consists of Ben Kelly from North Sails in Brisbane, and Aaron Carle (engineering/design/boat building) who both designed it, and then Russell Kerr (painter-come-boatbuilder during this project), along with Doug Fuller (boat builder. "Plus he is the wise one, having built multiple trimarans!" as Kelly informed me.) All four will make up her race crew.

The skilled crew has raced multis together for ten years, and El Toro is the classic labour of love, with weekends and a few nights being scraped together over the last five years to get her to the stage where she is set to race in the next few months. No pressure, of course... 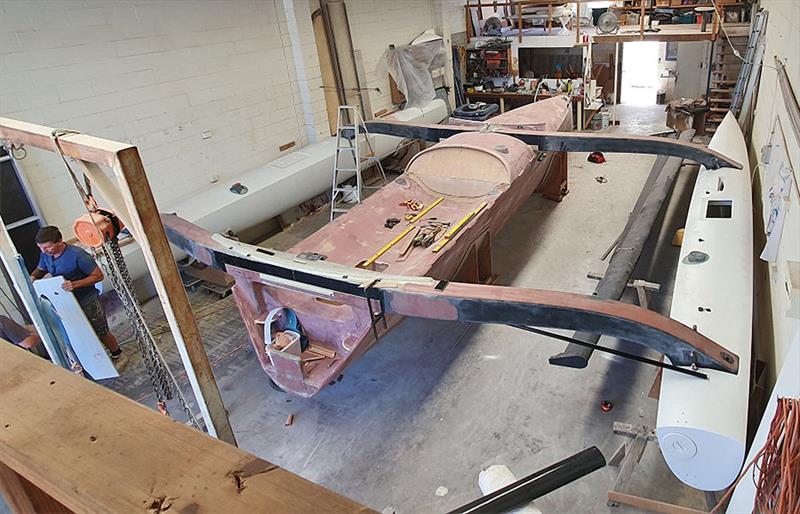 Powerful form of the new 9m trimaran El Toro - photo © Ben Kelly
The bucket list project is a non-commercial build, "...but we could do plans for home builders if they are crazy enough! We all say this will be our last ever build!" As Kelly said this, you got the feeling that they almost wanted to go on record to ensure they don't get any more grand ideas once El Toro is launched.

Kelly has won ten Multihull National titles aboard vessels penned by Grainger/Egan and Farrier, all of whom have influenced this boat's design, but you can easily also see a real French twist, given they all "...love the Multi 50s, ORMA 60s, Mod 70s, and Ultim weapons!"

El Toro is 9m LOA, with an impressive beam of 7.2m, and an all up sailing weight of 1200kg, plus her crew. I think you get the picture right there. She is completely demountable, with the structural beams running through channels in the main hull and plugging into the floats. Her mast is located at exactly halfway along, and sits on the main beam, with the traveller then mounted on the aft beam. The boards/foils are located in her floats, which then means she has a very small and lightweight centre hull. 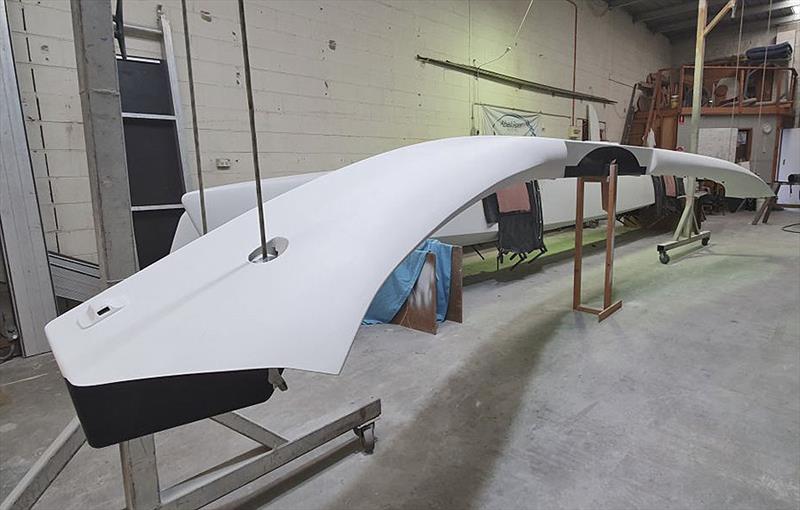 Aero fairing of the beams for El Toro - photo © Ben Kelly
El Toro is primarily GRP, with carbon reinforcing where needed, which has allowed them to keep the cost down. Equally, the OMR rule is not kind to super lightweight boats, so she is solid (by multi standards) to rate well, which means she be competitive now, and for some time to come. Her mast, boom, foils and beams are all 100% carbon. Note she has not been built to be a full foiler at launching, but this is certainly a place they can go if they choose, and the budget arrives to provide for that kind of fun.

You'll see her racing out of Manly on Moreton Bay, and also along the East Coast of Australia, but Kelly also points out that, "El Toro will also be a great platform for weekends away and joy riding on the bay with friends and family. My 11 year old son Luca is very excited about the new boat." 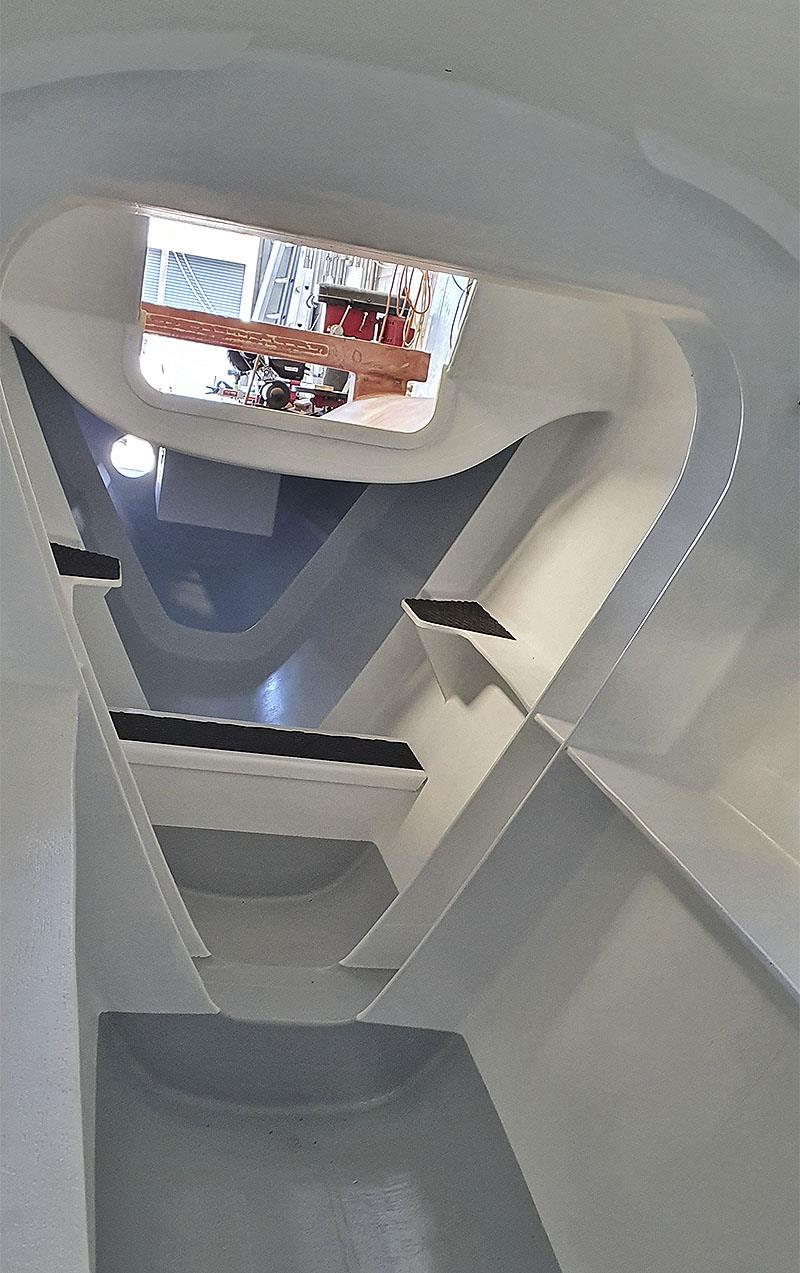 North Sails 3Di Raw will be used for her working sails, and then NPL panelled materials, along with Helix luffs, will give her a formidable, furling downhill selection to play with. "The wardrobe is reasonably conservative, and gives the ability to bring more sail area to the boat in the future, should it be required. The biggest gains in more recent times have come from North Sails incredible design systems and people, and 3Di structured technology," said Kelly.

"This will all be on show with El Toro, for she will be a test bed and demonstration vessel too (Editor's note: Lucky clients who get to go for a blast, I say!). I have enjoyed working with New Zealand based designer, Magnus Doole (designer for Black Jack, BeauGeste Mod 70, Fuku Scallywag Tri etc, and Extreme 40s), to nail down the sail wardrobe. BTW, we should be hitting the water this September. It's likely our first racing event will be the St Helena Cup in late October." 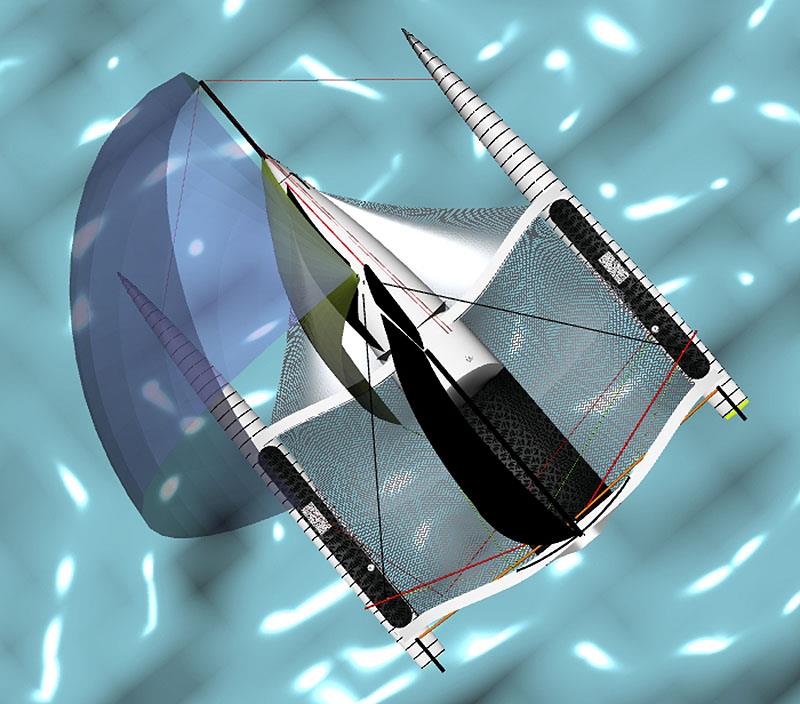 No shortage of sail aloft for El Toro - photo © North Sails
A project of this nature is always bound to inspire others as well, and El Toro will have some great brands of gear on board. "Gaelle and the team from Wichard Pacific have given great support for the entire build period. Most specifically, they have provided deck hardware like Wichard and Tye Tec fittings, loops and so forth, along with Facnor/Profurl furlers, and our Facnor halyard locks. These are incredible items and will really ensure we can extract all that El Toro has to offer."

"Joel Berg from Allyacht Spars has assisted with our Moonlight hatches, and then most especially with some custom parts to match our 14.3m long, 280mm C-Tech carbon wing mast. El Toro also has a C-Tech boom and bowsprit. Grant and Callum at Harken supplied the bulk of the deck hardware, Karver winches from Any Port Marine, and International Rope Supplies delivering a full custom package of strings," said Kelly in closing. 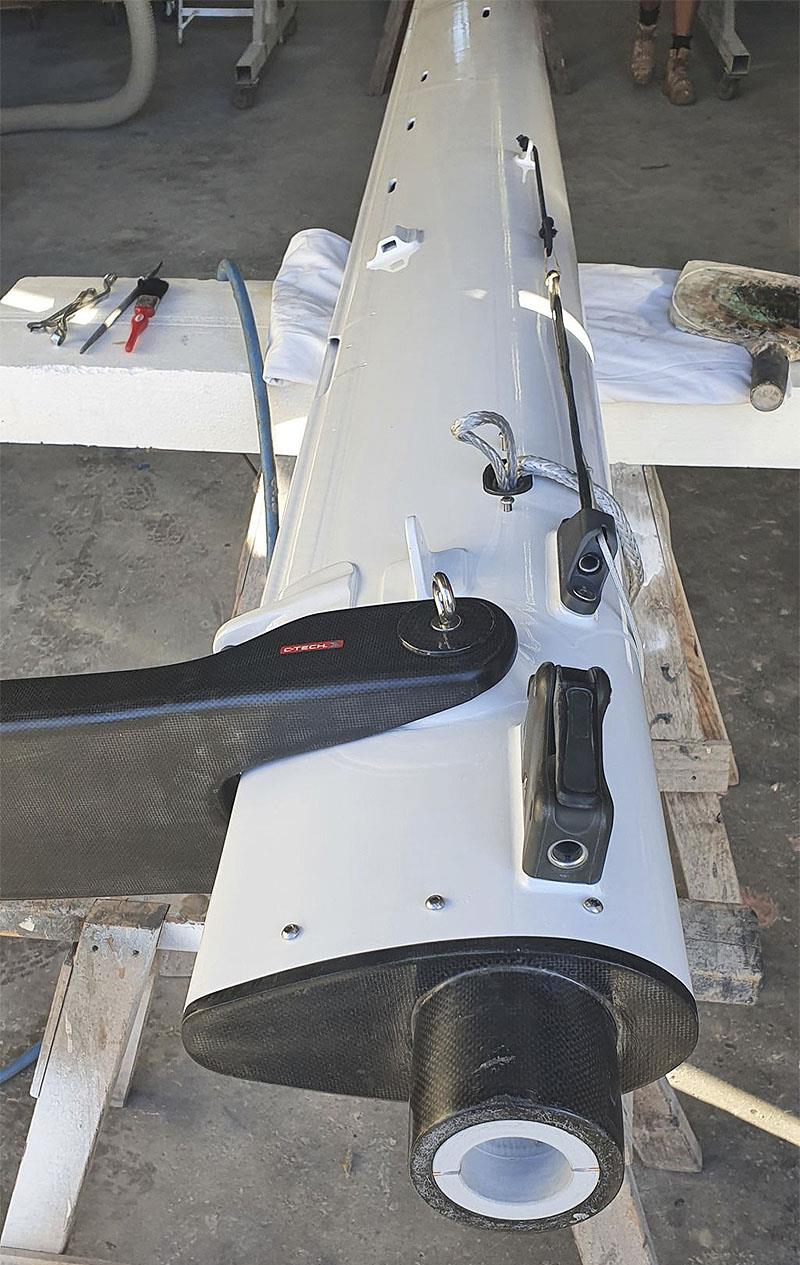 14.3m C-Tech carbon wing mast for El Toro - photo © Ben Kelly
One thing is clear, and that is that El Toro will be a marvellous test bed and showcase for all these amazing brands, and allow Kelly's clientele at North Sails the best working platform to develop multihull sails that are relevant to the OMR rule. Nice. Queue starts here BTW. Take a number... 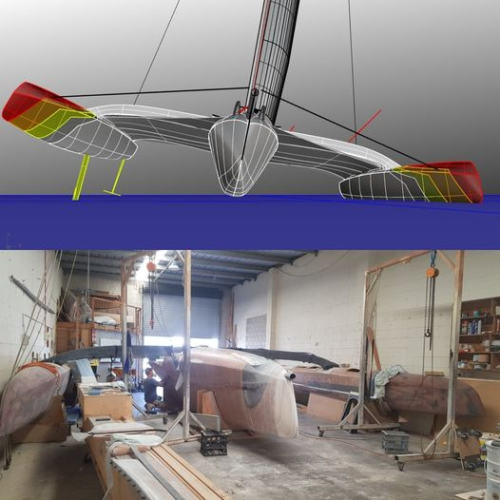 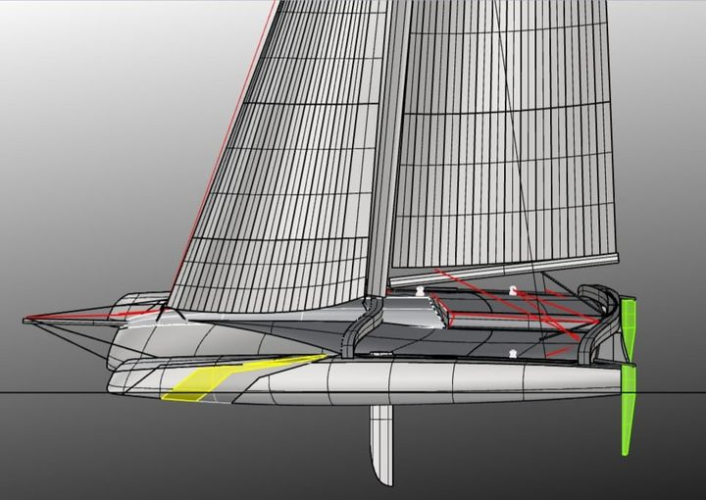 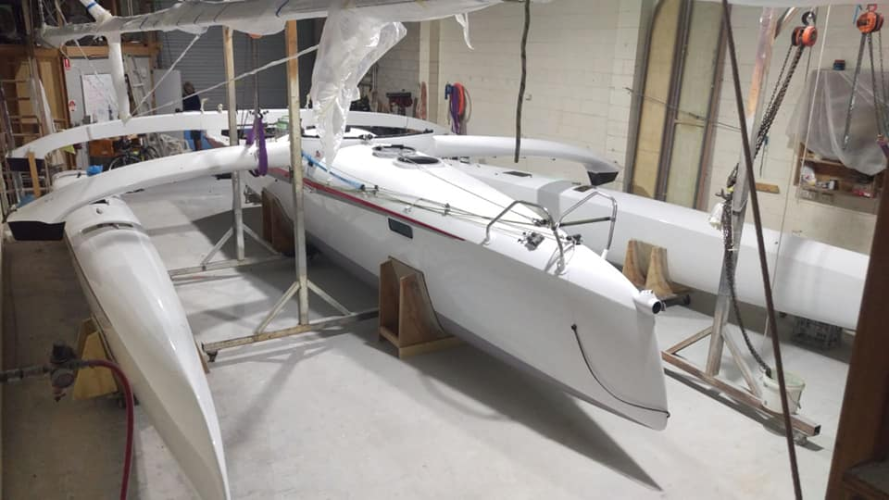 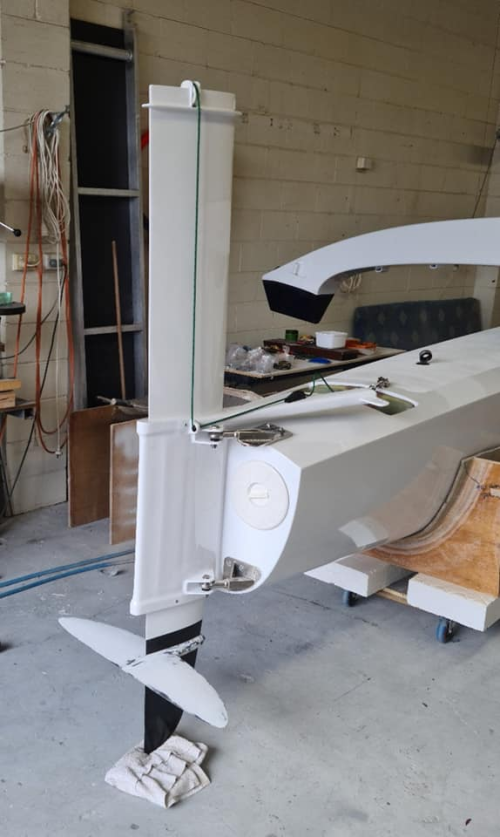 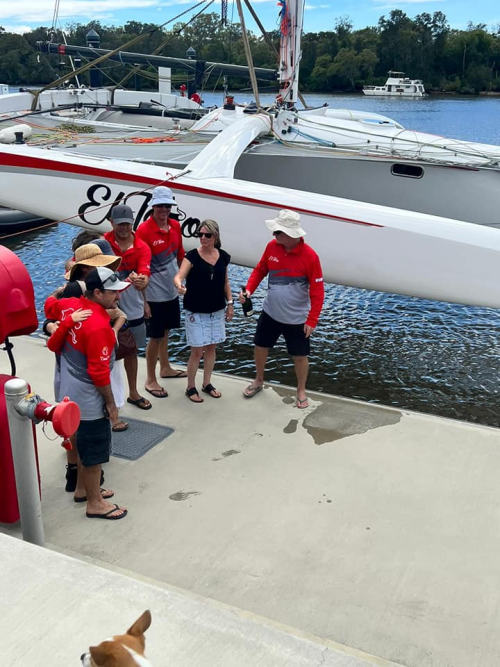 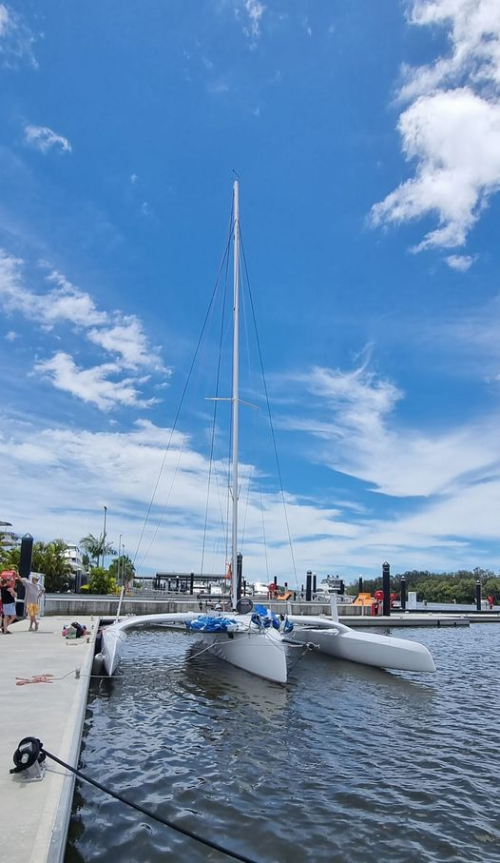 Nice looking boat.  I especially like the look of the transom profiles (probably because they look so much like the ones on my boat).

Congrats to all involved, a very cool design!

So good to see boats like this still being built.

Not sure about that companion way ladder though.

Beautiful. The floats remind me of the last Alinghi cat in valencia. Who designed this trimaran?

Pardon a stupid question:  What is the rudder horizontal foil intended for?  Are there other foils?

sail(plane) said:
Beautiful. The floats remind me of the last Alinghi cat in valencia. Who designed this trimaran?
Click to expand...

I believe all 4 owners had input on design


bridhb said:
Pardon a stupid question:  What is the rudder horizontal foil intended for?  Are there other foils?
Click to expand...

The foils on the rudders would be to help the boat sail more level with less hobby horsing and less chance of nose diving... not sure if they can adjust slightly for during the trialing stage

bridhb said:
Pardon a stupid question:  What is the rudder horizontal foil intended for?  Are there other foils?
Click to expand...

They are adjustable on a course tune on the top gungeon  deck plate, they are symmetrically shaped.

The reason is that they fight against fore/aft picth of the boat, essentially convincing the boat it has a longer waterline.

They are easily removable for lighter winds or crusing/WAGs racing.

It also gives you the ability to push the boat harder downwind as when the bow goes down the t-foils kick in a work to bring it back level.

The idea on this boat is to have them set at a neutral position and limit the drag.

Foiling boats such a sailgp and A-Cats run a fully adjustable systme on each side so they can run lift to leward to promote foiling and drag down on the windaward foil to increase the righting monment to put maximum power into the boat, this is not what we trying to do.

To answer the inevitable question about why we are not foiling or foil assist at this stage.

The boat is intended to be simple to sail with a mostly ammeteur crew and race to the OMR rating system.

To do foils well the engineering involved is critical and the costs are extrmelyu high, plus there is a great development process.

We have enough on our plate for now wiht the simple boat layout and any foils etc are going to be well into the future once we make it work in the current simple form.

From our first outing we have a few mods already, but she has shown signs of behaving very well and it appears we have got most of the majour design points right enough to have a great boat that we have designed ourselves.

PIL66 - XL2 said:
I believe all 4 owners had input on design

The foils on the rudders would be to help the boat sail more level with less hobby horsing and less chance of nose diving... not sure if they can adjust slightly for during the trialing stage

Aaron Carle and myself (Ben Kelly) designed the boat seven years ago and then got our mates together and started to build.

Of course many things apart from the basic shape have evolved over that time, with the input from one of our our initial Partners Zebb, and our two other owners Russel Kerr and Doug Fuller. So apart from the initial lines and foils and all design work required to actually build the boat coming from Aaron and myself the reality is that there is much more to it and along with some paid engineers on beams and rig all four of us have designed and built the final outcome together.

Aaron and Doug are boat builders, Russ is a painter and has done an awluf lot of boatbuilding during this project and finsihed the fairing and painting to a great standard we are all proud of. I am a Sailmaker and have a key interst in rigging and hardware.

This is a huge projct for us, the biggest achievment is four blokes wiht different skills and opinions and personalities reaching the end goal and still high fiving at the end!

Personally I am so stoked to be a part owner in this boat and it is all from our heads, with a few smart people giving a hand along the way.

We are very proud of the boat, of course having drawn it seven years ago there are things we would change, but in the scene we are racing in it will be a great boat for years to come. Thanks for all the interest.