A sailing life, daughter's tribute to her Dad

(if my cut and paste from today's Wall St. Journal works, it's on page A11), a touching story about what sailing, passed down the generations, means to a family:

nolatom said:
(if my cut and paste from today's Wall St. Journal works, it's on page A11), a touching story about what sailing, passed down the generations, means to a family:

What a beautiful story. They were fortunate to have such a wonderful bond.
R

Agree, nice remembrance. Your link didn't work for me. Here's another try:
After a Lifetime of Sailing Together, My Dad Asked Me for One Last Favor

text because there's a paywall:

After a Lifetime of Sailing Together, My Dad Asked Me for One Last Favor​

This is my first Father’s Day without my dad. I’ll be spending it on the Ivory Gull, the boat we sailed for decades.​

Before my dad had surgery three years ago, he asked me for a favor: “Lizzie, will you take care of the Gull for a few weeks?” We’d just finished a spirited sail on the Ivory Gull, his 34-foot Hunter that we’d sailed together for decades. “Sure,” I told him. But I had a question: What should I do if there was a problem? “Just call me,” he said.

Four days later, my dad, who was an orthopedic surgeon, went in for hip surgery. The night of the operation, while I was holding his hand, he had a massive stroke that left him with aphasia, unable to understand language. I was never able to have a conversation with him again. In an instant, caring for the Gull took on a much deeper meaning. This boat, where my dad had taught me some of life’s biggest lessons, was my responsibility now. Preserving his boat felt like preserving him. 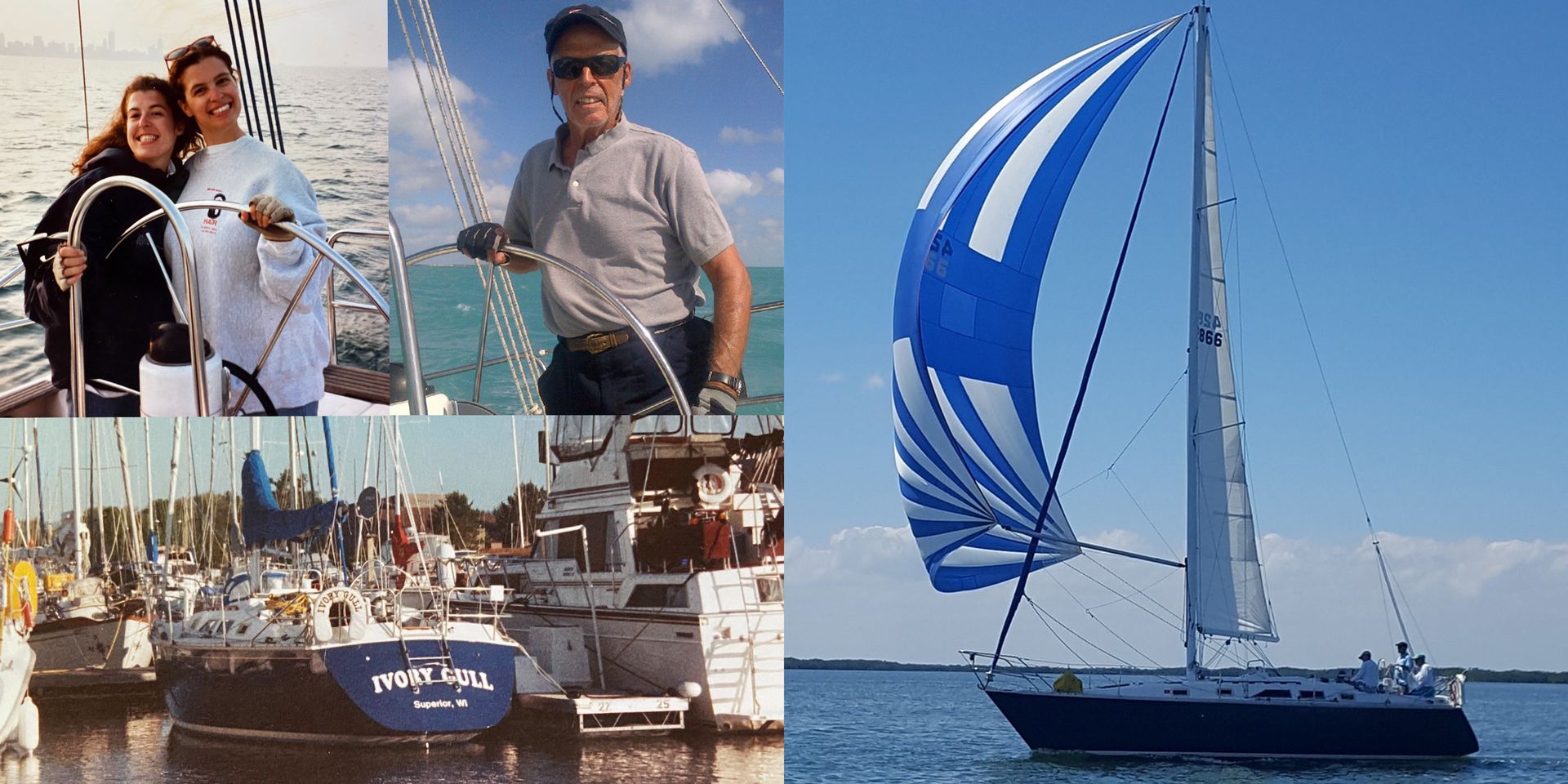 Clockwise from top left: The author and a sister, in white, sailing the Ivory Gull off Chicago in the mid-1990s; the author’s father skippering his boat in the Miami to Key Largo Race, 2016; the Ivory Gull in Biscayne Bay, off Miami, circa 2018; the boat docked somewhere in Lake Superior, in the late 1990s.

My dad taught me to sail when I was 8, in a catboat on the Indiana lake he’d learned to sail on as a child. To guide me, he held his hand over mine on the tiller. Days on a sailboat with him were some of my very best, filled with adventure and joy and beauty. I was in college when my dad bought the Gull. We sailed on summer weekends and Wednesday nights off Chicago. We spent family vacations cruising Lake Michigan with my mom and two sisters, to harbors with names I found poetic: Manitowoc. Saugatuck. Charlevoix. My dad took us for a magical night sail to watch a lunar eclipse. I skippered my first race, with my dad as crew. One summer, we spent six weeks sailing to Duluth, Minn. When we arrived, my sisters and I kissed the Gull’s mast with gratitude.

My dad held drills to help us become independent. Fire drills. Lost rudder drills, to learn to steer by sails alone. Man-overboard drills—he’d jump over the back rail with a shout when we least expected it. He taught us well: We always got him back on board. More than once, he talked me into going 50 feet up the mast in a bosun’s chair to change a lightbulb. (His pitch: “I’m stronger. I’ll crank.”) When I was back on deck, knees shaking, he told me: “Lizzie, you just demonstrated Hemingway’s definition of courage: Grace under pressure.”

In my 20s, we planned to cross Lake Michigan, returning to Chicago after a trip. But that morning, the wind was howling and the forecast warned of big waves. I was in my bunk when my dad blasted his whistle: “All hands on deck!” As my sisters and I climbed up into the cockpit, he handed each of us a life preserver and a safety harness. “It’s going to be a rip-roaring sail!” he said. “Dad, it’s too rough!” I protested. In the slip next to ours, four men sat glumly on a bigger boat. They’d aborted their sail. My father put his arm around me. “I trust my crew and my boat,” he said. “And you can never allow yourself to be boxed in!” We pushed off. And as we did, my dad shouted to the guys still sitting on their boat: “You just got bested by my three girls!”

I can still hear his laugh. 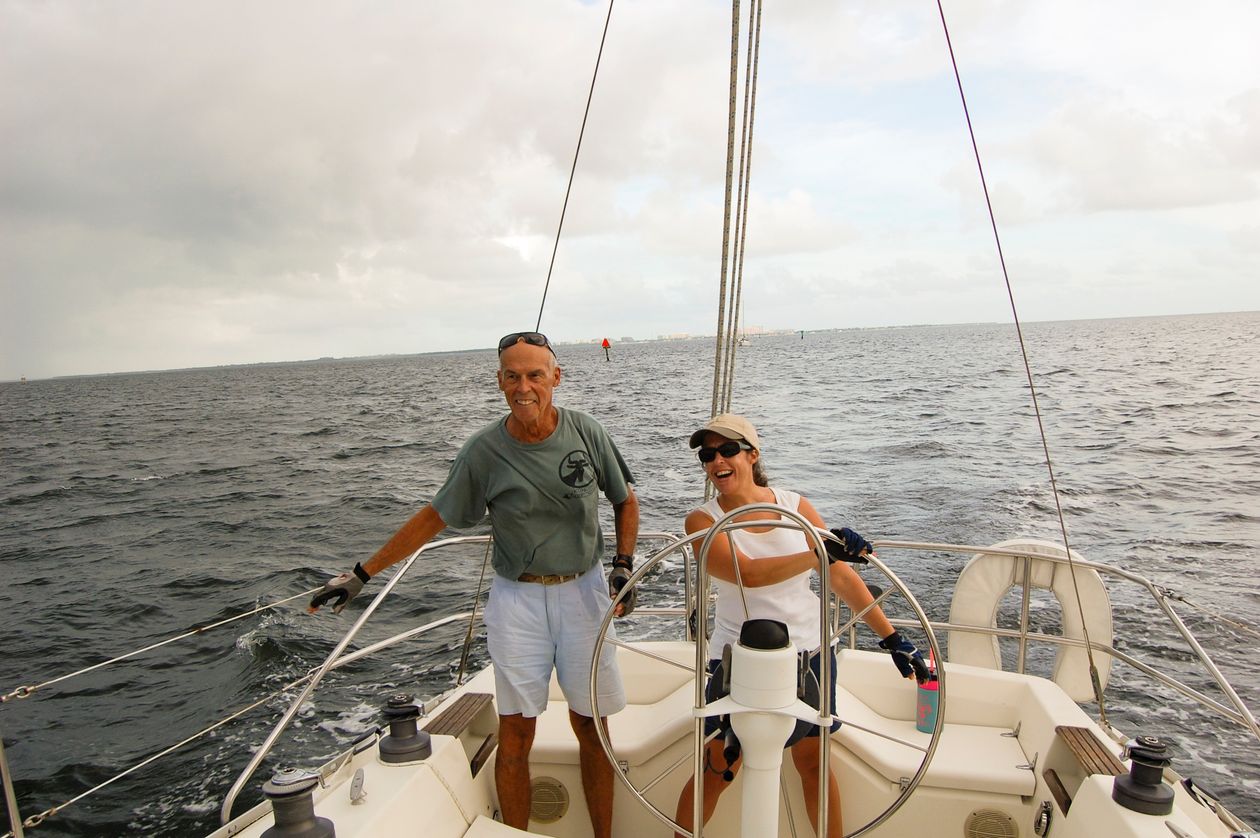 The author and her father sailing the Ivory Gull in Biscayne Bay, off Miami, in 2010.

The Gull changed ports, crew and colors (from white to blue) over the years. My dad brought her to Miami, where my parents moved. I followed a few years later, and we began sailing and racing together again. We cruised to the Florida Keys, on one glorious day accompanied by a pod of dolphins. And we had long talks—about sailing, books, relationships, life. “That was a great day, Lizzie!” he’d tell me after every sail, even the rough ones. “I’m so glad we did it together.”

After my dad’s stroke, I brought his favorite hat to the ICU, the one that says “Captain, Ivory Gull.” He wore it as he fought to walk, swallow, communicate and survive. On the Gull, I found an index card he’d left for me with a short list of instructions: Run the engine for 20 minutes. Check the bilge for water. Make sure all batteries are off when you leave. That was it. My dad who’d taught me so much had explained very little about the maintenance of the Ivory Gull. Whenever I’d asked, he’d told me it was his responsibility.

We had a hurricane coming when he was in the hospital. Friends helped me take the sails off and move the Gull to a more sheltered place. I sobbed as I drove away. I was already losing my dad. I couldn’t bear to lose his boat. The storm missed us, and my dad came home. But he never made it back to the Gull. We found a new way forward: We watched sailing documentaries, often while he wore his captain’s hat and while holding hands. I helped take care of the father who’d always taken care of me.

And I took care of his beloved Gull. When I turned the engine on one day and the entire boat shuddered violently, I cried again. Then I got out my dad’s maintenance log; for decades he’d recorded every repair. That’s where I learned who he trusted to work on his boat. I added my own updates to the log. In an old book on diesel engines, I was thrilled to discover his underlining and notes in the margins. It felt like my dad and I were having the ongoing dialogue we couldn’t have in person.

My father died in January, while I was holding his hand, just as he’d held mine on the tiller years ago. That night, I went into his closet and buried my face in his captain’s hat. I could still smell him then. The scent is fading now. But he’s everywhere on the Gull—in the old-boat diesel smell of the cabin; the sound of the engine starting up, the curve of a mainsail, the wind in my ear.

This Father’s Day, I’ll be out on the Ivory Gull.
N

Thanks for making the link, much appreciated.
M

Perfect story. Thanks for that.

The Campbell, BC, Canada

Thank you, it is nice to read about a role model father.
From a father of three daughters.

My dad also passed back in Jan. This post brought back a flood of memories. I just had the pleasure of my daughter and wife visiting me for a week on my boat in Fakarava atoll in the Marquesas. Although my daughter will probably not follow me onto boats, she is currently following me at her age into rock climbing. I asked her to replace light bulbs in the masthead lamp and she refused a harness and safety halyard and simply climbed the stepped mast as if it were nothing.
P

nolatom said:
(if my cut and paste from today's Wall St. Journal works, it's on page A11), a touching story about what sailing, passed down the generations, means to a family:

My favorite dad story, he and his brother crewing Gale III. I am at the helm with the mainsheet in my hand. Gale, one of the last wooden C-Scows, was blindingly fast but sailed the old way, heeled sharply with crew riding the bilge boards. The mast was nearly level with the water, I eased off of the mainsheet, my father jokingly called me a “chicken.” 60 years ago , this summer. We lost both brothers just two years later. Am about to go out and sail our Scow. He would be 99 this year and both Brenda and I know he is sailing with us, every time Slip Sliddin Away is on the water. On the grounds of the Cedar Lake Yacht Club (Indiana) 1960 Great thread, wish I had started sooner digging up some old photos of my Dad and I 'messing about with boats'. Sadly they are few. My Dad was a Navy 'lifer' and I loved being a 'Navy Brat' except for the long deployments when he was overseas on the 'big grey boats'.

I am surprised at my revelation just now that it has been close to five years since he went onto smoother seas and gentler winds. Here are the few sailing photos I could find in his honor. My dad was never a sailor but we were both fighter pilots and shared a lot of experiences from that line of work over the years. One day we got him, my mom and little sister out on our 33’ sloop on a breezy day and I gave him the tiller and told him to think of steering like he was flying the knife edge of L/D max in an airplane. He got this huge grin and steered us up and down the bay for at least two hours. Finally, I naively suggested it was time to let Little Sis have some tiller time. That lasted all of five minutes at which point he couldn’t stand it any more, grabbed the tiller to show her what she was doing wrong-and never let go until it was time to park the boat in the slip.
You must log in or register to reply here.
Share:
Facebook Twitter Reddit Pinterest Tumblr WhatsApp Email Share Link