This event will take place from May 6-8, 2016, with official practice racing on the Friday and point-scoring races on Saturday and Sunday.

The Event Village will be in the Brookfield Place Waterfront Plaza, while the racing will be on the lower Hudson River off the Battery Park City Esplanade (between the Pier 25 basin to the north and The Battery to the south).

The technical areas for teams, race management and America’s Cup TV production will be based at Liberty State Park and Liberty Landing Marina, across the Hudson River in New Jersey. 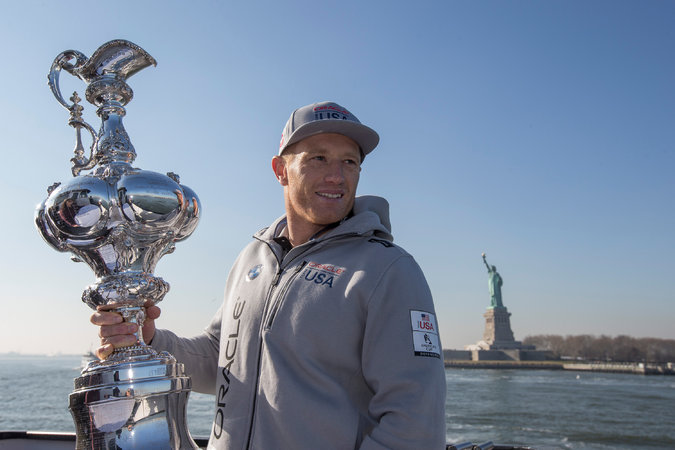 The next America’s Cup, in 2017, will be contested in the unlikely and isolated location of Bermuda, even though Oracle Team USA holds the trophy.

But at least the prologue to the Cup, sailing’s most prestigious event, will have a strong American flavor next year, with a Louis Vuitton America’s Cup World Series regatta in New York City on May 7 and 8.

The two days of racing, which will be formally announced on Tuesday, will be part of a global series of preliminary events leading into the next America’s Cup. The regatta in New York will be followed by a World Series event in Chicago in June.

“I think this is going to be key to connecting to our U.S. audience and the mainstream audience,” Jimmy Spithill, Oracle’s skipper, said Monday.

The New York races will take place on the lower Hudson River off the Battery Park City Esplanade and will bring the America’s Cup community back to the city that has the longest connection to the trophy, which was held by the New York Yacht Club from 1851 to 1983.

“The Cup was bolted down here for a long time,” Spithill said. “So it’s kind of funny that we bring it back, and I think New Yorkers will be in for a bit of a shock when they see what it’s about. Probably a lot of them think it’s raced in the old, slower boats, and they are back with the old perception they had. Once you see these things tearing around the Hudson, they won’t be able to walk past without stopping and just being in a bit of shock, I reckon.”

Shocking New Yorkers remains quite a challenge, but the America’s Cup has changed drastically from the days when stately monohull yachts engaged in tacking duels that unfolded over several hours.

The last America’s Cup, in San Francisco in 2013, was contested in extreme 72-foot catamarans with wing sails that could hit speeds exceeding 40 knots, placing great physical demands on their crash-helmeted crews.

The Cup in Bermuda will be contested in smaller catamarans in an attempt to control costs. Those boats are still being developed, and the World Series events will be raced in AC45 catamarans, which are highly maneuverable and relatively easy to transport in shipping containers. That is a good thing, as the first World Series regatta of 2016 will be staged in February in Oman before the circuit travels to North America.

“I just got back from Oman,” a weary Harvey Schiller, the America’s Cup commercial commissioner, said Monday. “We are going to have at least six events next year.”

Schiller said the series would return to Portsmouth in Britain in July, with other regatta sites being worked out in Asia and Europe, potentially in Japan and France. The idea is to bring the series to the home markets of the teams that will be competing for the 2017 America’s Cup.

^ Not quite sure while there's still guessing going on. The program, dates and locations was outlined publically in Bermuda. And so far the events being added to theACWS calendar have followed what was announced there..

And reiterated in the NY announcement

Four events on the 2016 schedule have been announced to date:

Two additional Louis Vuitton America’s Cup World Series events are anticipated to complete the calendar, likely in Europe in mid-September and in Asia in mid-November.

I'll be there (only 'cause I have free housing). Saw pricing on ACWS Chicago. Not looking forward to NYC prices!

Anyone know whether there will be an official viewing area from lower Manhattan and when tix go on sale?

The boats are going to be flown over to Japan. SoftBank Team Japan challenged through the Kansai Yacht Club. The Kansai.Osaka International Airport is one of the biggest Airports in Asia and suited &amp; sophisticated to allow the boats to be flown over.
Click to expand...

It is more likely that the ACWS will be at the former and 2020 Olympics site of Enoshima in Sagami Bay where the team was holding tryouts.

Damn! Another rule change! Can't these guys settle on a boat, its getting near crunch time.

They're no fun unless they get sailed backwards...

After a hiatus of almost a century, the America’s Cup Returns to New York


Join the YRALIS onboard the Aqua Azul on Saturday, May 7 for up close and personal viewing of the Louis Vuitton America’s Cup World Series (ACWS).In two years, the greatest sailors on the planet will descend on Bermuda to take on ORACLE Team USA as she defends her 2013 America’s Cup title. These very same teams will be right here in our backyard, racing on the Hudson for the first time since 1920. Be a part of history and join the YRA for a day spent on the Hudson witnessing racing at its finest!

Catch the Excitement. You don’t want to miss this opportunity! For only $225 per person, you will have an orchestra seat on board the Aqua Azul with premium open bar and cocktail style menu all included.

You must be a member of YRALIS to secure your place on the Aqua Azul.

Not a member of YRALIS? Join Now!

Open bar! You are so right, these people do not know what kind of rif-raf this yachting stuff attracts. This is definitely worth a 6 hour drive and the price of admission.

There will be a problem if they run out of booze before the first start.

Props to ACEA for making the effort, but man there's such a small window for everything to work right. This NYC event is so risky.

50/50 right now. If I can time it so I can bring the grommet to town to see family, then yeah, but man it is hard to be optimistic about racing at that location!

Yeah, I hear you. We got a couple rooms at 44th Street and are doing the weekend with another couple. Let me know if you schedule it.