Sol Rosenberg said:
This is what happens when stupid motherfuckers think that they are smarter than smart motherfuckers.
Click to expand...

Just wondering if trying to defraud the awardees like that is a prosecutable crime. Pretty sure it is but not 100% so.

Thinking Alex's next trial might be a criminal one. Hoping, anyway.


No. I didn't want it to sound mean, I wanted it to sound fucking nasty. Cram his mouth full of his own shit before you stick his head down the pipe.
B

How about "flushed"...I mean, it is obviously obvious.

Mark_K said:
Just wondering if trying to defraud the awardees like that is a prosecutable crime. Pretty sure it is but not 100% so.

A person who, having devised or intending to devise a scheme or artifice to defraud and for the purpose of executing or concealing such a scheme or artifice or attempting to do so—
(1) files a petition under title 11, including a fraudulent involuntary petition under section 303 of such title;
(2) files a document in a proceeding under title 11; or
(3) makes a false or fraudulent representation, claim, or promise concerning or in relation to a proceeding under title 11, at any time before or after the filing of the petition, or in relation to a proceeding falsely asserted to be pending under such title, shall be fined under this title, imprisoned not more than 5 years, or both.

bridhb said:
How about "flushed"...I mean, it is obviously obvious.
Click to expand...

Ishmael said:
No. I didn't want it to sound mean, I wanted it to sound fucking nasty. Cram his mouth full of his own shit before you stick his head down the pipe.
Click to expand...


Doesn't take a long time. Justice would be to find a way for him to suffer incredible pain for at least a couple of years.

Snaggletooth said:
Ime am OK withe that..... Ish is haiveng waye to pearsonalle reactione to it.........
Click to expand...


Oh, all right. I'm not very good with rancid hatred.

Sandy Hook victims’ families asked a federal bankruptcy court on Thursday to order the Infowars conspiracy broadcaster Alex Jones to relinquish control over his company, saying he has “systematically transferred millions of dollars” to himself and his relatives while claiming to be broke.

In a filing in the bankruptcy court in Houston, the families of nine Sandy Hook victims said they sought to have a bankruptcy trustee who is already monitoring the case take control of Free Speech Systems, the parent company of Mr. Jones’s misinformation-peddling media outlet. The families are also seeking a court-appointed oversight committee to restrict Mr. Jones’s ability to control Infowars’s finances.

Mr. Jones’s claimed insolvency is at the heart of his efforts to avoid paying for the damage done by his Sandy Hook lies. Earlier this month, a Texas jury ordered him to pay the parents of a child killed in the 2012 Sandy Hook school shooting nearly $50 million in compensatory and punitive damages for spreading the falsehood that they helped stage the massacre.

“Alex Jones is not financially bankrupt; he is morally bankrupt, which is becoming more and more clear as we discover his plots to hide money and evade responsibility,” said Kyle Farrar, a lawyer for the Sandy Hook families. “He used lies to amass a fortune, and now he is using lies and fictions to shield his money.”

“We will be filing a response soon,” R.J. Shannon, one of Mr. Jones’s lawyers in the bankruptcy matter, said on Thursday. He declined to comment further.

The families said in their filing that Mr. Jones had siphoned nearly $62 million from his business into financial vehicles benefiting himself and his family beginning in 2018, when the Sandy Hook families first filed suit.

At the core of his bankruptcy claim is Mr. Jones’s assertion that Free Speech Systems owes $54 million to PQPR Holdings, a company owned and operated directly and indirectly by Mr. Jones and his parents. The debt is fictional, the families’ lawyers said in Thursday’s filing, and “a centerpiece of Jones’s plan to avoid compensating the Sandy Hook families.”

For years Mr. Jones broadcast lies on his show that the shooting that killed 20 first graders and six educators in Newtown, Conn., was staged by the government as a pretext for gun control and that the victims’ families were “actors” in the plot. Conspiracy theorists tormented the victims’ families online, defaced and stole memorials to their murdered loved ones, confronted them on the street and threatened their lives.

In 2018 the families of 10 Sandy Hook victims filed four defamation lawsuits against Mr. Jones in Texas and Connecticut. Mr. Jones, an avid supporter of former President Donald J. Trump, is also under scrutiny for his role in organizing events surrounding the Jan. 6, 2021, Capitol insurrection.

Late last year, shortly before Mr. Jones lost all four Sandy Hook lawsuits by default after refusing to submit business records and testimony ordered by the court, he began transferring up to $11,000 per day and up to 80 percent of Infowars’s sales revenue to PQPR, the families’ filing said. Infowars’s explanation for the payments has shifted over time, with the company’s representatives most recently saying that the money was payment on debts to PQPR for merchandise.

The families’ sweeping victory in the four suits set the stage for three trials in which juries would decide how much he must pay the families in damages. Shortly before the end of the first trial, which resulted in the award of nearly $50 million in damages to the Sandy Hook parents, Mr. Jones put Free Speech Systems into Chapter 11 bankruptcy.

The families say the payments are “fraudulent transfers designed to siphon off the debtor’s assets to make it judgment-proof” — in essence, an effort by Mr. Jones and his family to be the first party paid in any liquidation of his empire. The families are also pursuing a fraudulent transfer of assets lawsuit against Mr. Jones and his companies in Texas.

Contrary to Mr. Jones’s company’s claims, the new filing said, “PQPR performs no services, has no employees and has no warehouse,” adding that “money that Free Speech Systems pays PQPR ends up in Alex Jones’s pockets.”

Mr. Jones has continued to parlay his Sandy Hook lies and the Texas jury award into a boon for his business. Like the former president, Mr. Jones claims he is being pursued by “deep state” enemies, and the Sandy Hook lawsuits are part of a sweeping conspiracy to silence him.

His audience has responded by buying more Infowars diet supplements and survivalist gear. Infowars’s sales have increased about 50 percent since the trial in Austin, Texas, to nearly $1 million per week, Mr. Jones’s representatives told the bankruptcy court, projecting sales could reach $450,000 a day by the end of August. Mr. Jones’s online pleas to his followers have also resulted in millions of dollars in donations, including $8 million in cryptocurrency that he pocketed before the trial, the families’ lawyers said.

Mr. Jones is emblematic of a cadre of far-right figures who came to prominence during the Trump era by broadcasting incendiary false theories about threats to America from immigrants and left-leaning “globalists.” A community college dropout, Mr. Jones, 48, got his start in the late 1990s with conspiracy-themed talk shows on Austin community access television and a local radio station. He has ties to extremist groups in the American West, including some involved in armed standoffs with the federal government.

In 2012, the year of the Sandy Hook shooting, Mr. Jones and his father, David Jones, got into the diet supplements business. David Jones, a dentist with a string of successful practices, joined Infowars full time the next year.

Working with a Texas lawyer, Eric Taube, Alex Jones and his father created PQPR as part of a legal network of limited liability companies, “structured to protect the family from ongoing risk of forming the business, running the business and adventures and misadventures that could come in the future,” David Jones said in 2014 court testimony.

Today the Infowars online store sells a variety of products targeted to an audience suspicious of traditional medicine and the federal government, including diet supplements and quack cures, dried foods and supplies for home shelters, air and water filtration systems, body armor and firearms paraphernalia.

“He didn’t ride a wave; he created the wave,” Bernard Pettingill Jr., a forensic economist who examined Mr. Jones’s finances, said in court testimony this month. “He is a very successful guy.” Mr. Pettingill valued Mr. Jones’s company at a minimum of $130 million, based on a partial analysis of its revenues.

Free Speech Systems’s debt to PQPR is “a clawback to pay himself back,” Mr. Pettingill testified. “He can say he’s broke, he has no money, but we know that’s not the fact.”

During Barack Obama’s presidency, Mr. Jones grew his following by fueling fears of “leftist” government plans to usurp Americans’ freedoms. Within hours of the Sandy Hook massacre, Mr. Jones was broadcasting lies to tens of millions of listeners, falsely claiming that the massacre was a “false flag” operation plotted by the government.

Mr. Jones has repeatedly refused to provide business and financial records ordered by the courts. But the records he did supplyindicated that business surged on the days Mr. Jones spoke about Sandy Hook, telling his audience his political enemies aimed to shut Infowars down. Mr. Jones said in court testimony this month that he earned $70 million in revenues in 2012, the year of the shooting.

When does that fat POS go to jail for contempt? I thought ignoring a court order was frowned on by judges.

Steam Flyer said:
When does that fat POS go to jail for contempt? I thought ignoring a court order was frowned on by judges.
Click to expand...


Maybe they will bundle it with the insurrection charges. 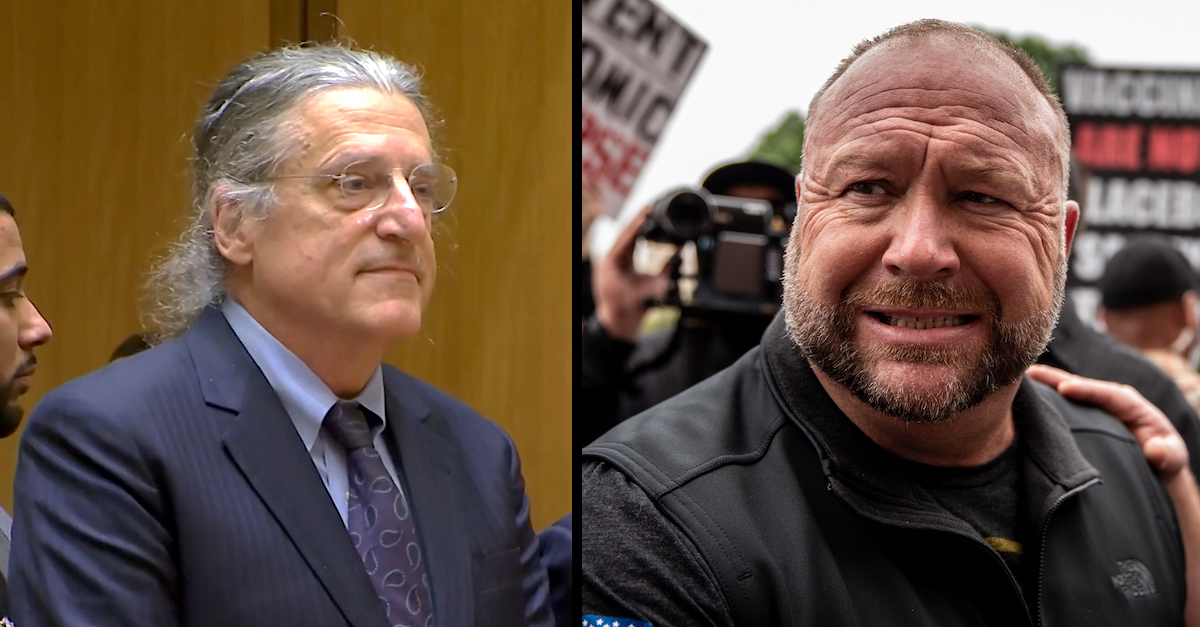 One of the lawyers for Infowars host Alex Jones has himself lawyered up, and his counsel on Friday notified a Connecticut Superior Court judge that he fears a potential criminal prosecution in connection with an attorney ethics probe.

It is the fuckwit on a ticktock video screaming “I KILLED THE KIDS!!!” 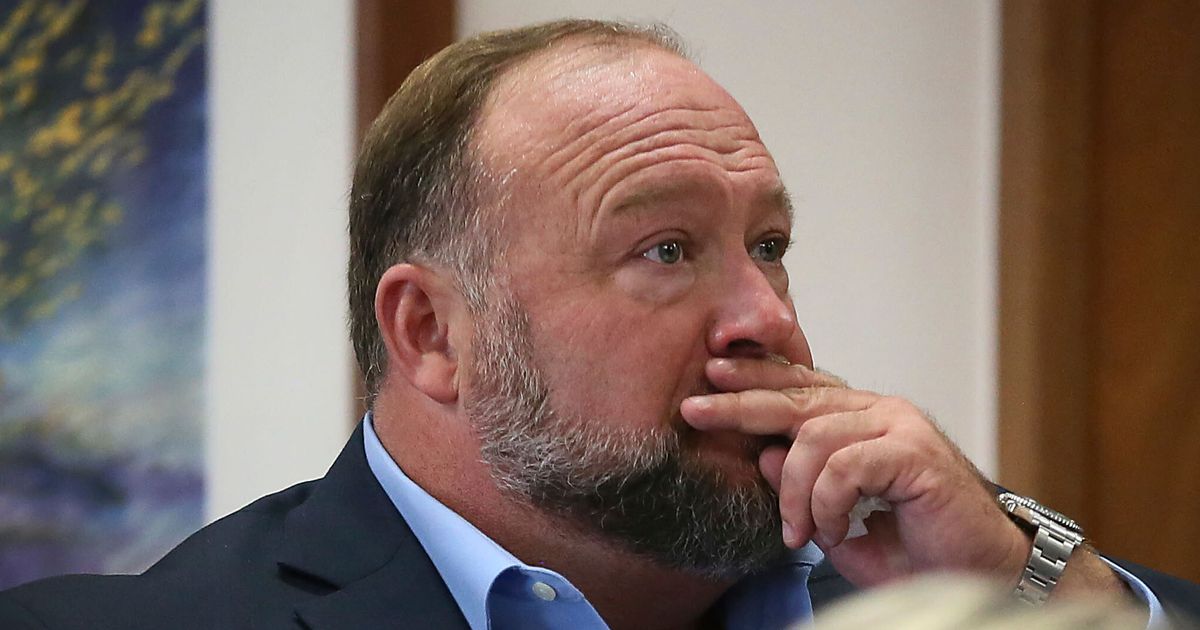 A Connecticut jury will decide how much money the Infowars host should pay for the lies he spread about the 20 children and six adults killed in the state.

Good - grind the cocksucker into the dirt.

anyone have any idea whether CT courts are streamed?