Not a very international Worlds. What will World Sailing say?

Jono said:
Not a very international Worlds. What will World Sailing say?
Click to expand...

That's right, not a single non frenchman in the final results.

CLASS40. Inter Invest (Matthieu Perraut) won the 24-hour race of the Class40 World Championship; Crosscall (Aurélien Ducroz) was in the lead on Thursday evening before Friday's coastal races and, on Saturday, the Tour de Ré, also open to other classes (more than 200 participating boats).

For those that want to follow the globe40 race, tracker in full browser window :

yl75 said:
For those that want to follow the globe40 race, tracker in full browser window :

That's great, years of preperation and training.
At the start of a round the world race there is a collission between a french boat and a canadian boat:
The Globe en solidaire against Whiskey Jack, The first losing their bow sprit and forced to return to port. Whiskey Jack still in the race. What a fuck up..! Great to see this race start though. That said, 6 boats left, how many realistically finish? Looking at the teams only one seems to have real experience. The Japanese on 101…
L

If you read the explanations of the collision from the crew on the boat that lost their bow sprit; they were on port tack, under autopilot, and they T-boned the other boat which was on starbord tack... but he says that it is not necessarily their total responsability...

After months, indeed years of preparation, the crews took the OFFICIAL START of the first edition of the Globe40 this Sunday 26 June at 15:00 hours

No news on the website since the start, no news on their Facebook page. No mention of the 'incident' anywhere... They're trying to hide the bad news or they're just going to let the race fade into insignificance? Strange, just really strange!
V

Has Doyle made any inroads in the Classe 40?

They are now doing furling jibs where the “forestay” is actually a sling of carbon integrated into the sail. Sounds like the kind of thing that might get traction in such a competitive class if allowed by the rules.

Love to hear of any experiences if it is a thing.
S

They are now doing furling jibs where the “forestay” is actually a sling of carbon integrated into the sail.
Click to expand...

I think you are talking about Cableless sails, not jibs. These sails with a structural luff eliminate the need for an integrated cable in the sail and fly more "free", weigh less, etc while retaining the furling capabilities. There are NO jibs without forestays on a stayed mast.
Last edited: Jul 8, 2022
3

From the class rules:
103.02.02 Solent
Triangular sail flown from the fixed forestay. The solent cannot be manufactured with a structural luff.
V

Solo sailor, as I understand it, this is a very new thing- is not the same as a “cableless” structured luff code zero type sail (which is where Doyle originated the concept of the structured luff).

Doyle and North are now bringing concept of the structured to jibs- sails flown from the forestay. The idea is that you “share” the load between the sail luff and the forestay. The advantage is said to be aerodynamic and structural: a straighter luff with lower rig load.

Doyle now is taking the next logical step in to the context of a furling jib: put ALL the forestay load into the sail. They laminate a carbon sling into the luff of the sail which is wound around purpose built head and tack plates.
S

Sharing the load with the forestay is quite different from elinimating it.
H A version optimized for the Clak 40

After two first examples launched in the fall of 2022 , two new Clak 40s are about to leave Multiplast, for Martin Le Pape and William Mathelin-Moreaux , in a version that the shipyard, with the assistance of the architects and skippers, endeavored to optimize.

Multiplast embarked on the Class40 adventure at the end of 2020 by teaming up with the VPLP Design agency to build a new 40 footer called Clak 40 . Or the smallest racing monohull ever built by the shipyard founded by Gilles Ollier in 1981. " The project appealed to us because the class is super dynamic, it was also a change of economic model for the shipyard ," explains Yann Penfornis, CEO of Multiplast. Unlike the "one offs", for which the racer and/or his partner finance the mold - very often to make only one or two boats - it is indeed Multiplast which has, this time, taken the risk by investing in the tools with the ambition to create a small series.


After a first copy for Andrea Fornaro , a second Clak 40 is launched in early October 2021, a month before the start of the Transat Jacques Vabre, for Nicolas d'Estais . Who, with Erwan Le Draoulec by his side, finished 13th in Fort-de-France, before attacking the 2022 season at the beginning of April on the 1000 Miles of Sables with a fine 6th place . “ I've always been in the game, welcomes the skipper of HappyVore. It's a great satisfaction for my first solo race on board. The ergonomics of the cockpit are perfect and the boat is very comfortable upwind and VMG descent . It's harder on the reach, but I think I have a good margin of improvement .


A progression that started last winter with a return to the Multiplast yard to save precious kilos , the boat having proved to be above the gauge weight (4580 kilos) when it left. “ The new Class40s are small Imocas, rather than big Minis, analyzes Yann Penfornis. The developed sides are important, the shapes taut, the speeds high and the structure must therefore be very tight. Building a robust boat with minimum displacement is a challenge. ”


This slimming cure was also an opportunity to rework the deck line in the forward area . “ For V2, we have identified a significant potential mass gain , explains Quentin Lucet , architect at VPLP Design. In part, it comes from an optimization of the sampling of certain structural elements to scrape every precious kilo, while remaining robust; this gain is also made possible by the riders' choice of equipment which has a direct impact on the total weight of the boat ." Equipment in the forefront of which is the engine, the new Kubota base being 15 kilos lighter, for the same displacement , that the Yanmar installed initially.


The other gains mainly concern the rigging : “ I chose a mast with a single spreader spreader and no mainsail track. It's probably a little more complicated, but all the best do it like that and given the level of the class, you have to adapt! “ , explains Martin Le Pape , who also paid particular attention to the fittings . , adds the sailor who is preparing to launch the Clak 40 n°3, leased from an Italian owner, Francesco Rosati, with the main objective of the Route du Rhum-Destination Guadeloupe .


With the delivery of the fourth copy of the VPLP design this summer for William Mathelin-Moreaux , a total of four Clak 40s will set off for the Route du Rhum on 6 November. " We unfortunately refused two other requests, because the three Imocas under construction here (V&B-Monbana-Mayenne, Malizia and Paprec Arkéa) as well as the SeaBubbles (passenger foiling boats) mobilized all our teams ", indicates Yann Penfornis. 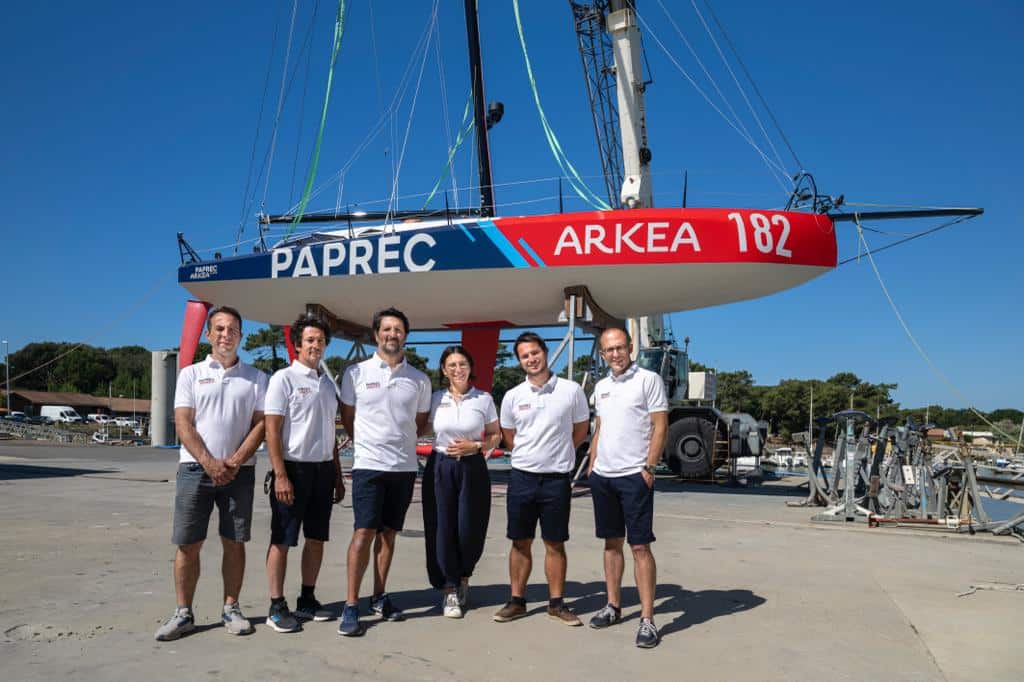 “ Even if we know that the competition will be tough with 55 competitors, including 26 new boats, we are keen to do well ,” underlines the skipper

Drheam Cup, which will start on July 17 in Cherbourg.
H

Three and a half months before the start of the Route du Rhum – Destination Guadeloupe, the skipper of the Class40 Crédit Mutuel is preparing to set sail for the start of the 4th edition of the Drheam Cup, from Cherbourg-en-Cotentin, on Sunday 17 July. An excellent opportunity to measure up against the competition and also discover new rivals before the legendary Transatlantic. 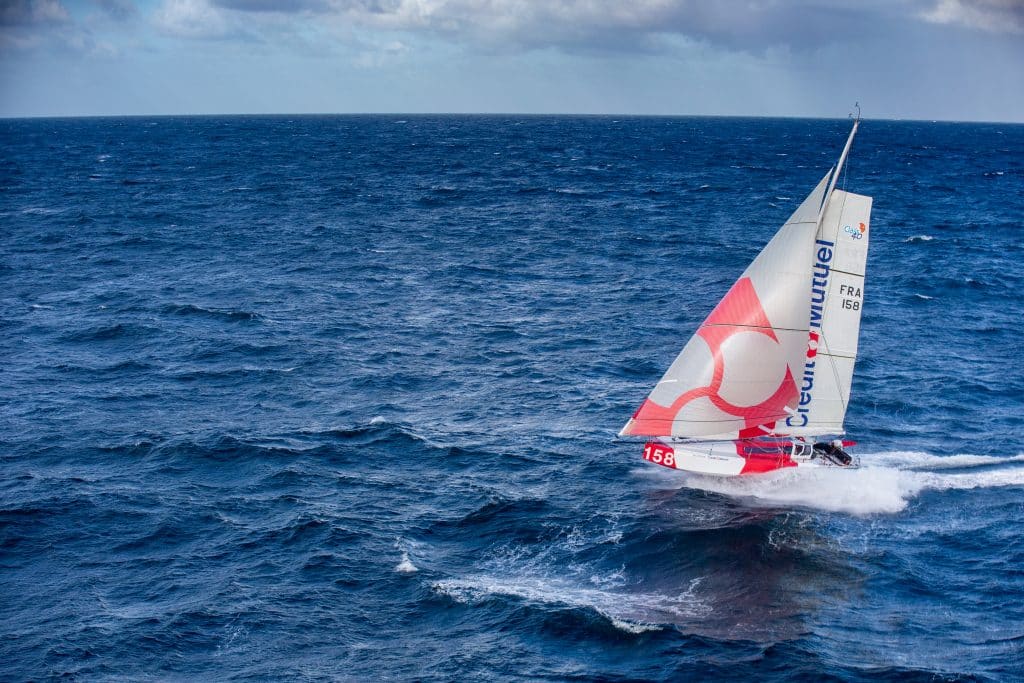 Many of them – Ultimate, IMOCA, Class40, Ocean Fifty and the Rhum mono and Rhum Multi class – will meet at the start of the Drheam Cup on 17 July in Cherbourg. For Ian Lipinski and his Class40 Crédit Mutuel, this new meeting will be a new opportunity to come up against ever tougher competition. The Class40 constituting the largest fleet in the Drheam Cup, with 37 solo sailors on the starting line.
Sur un parcours de 1000 milles qu’il a su dominer en 2020 avec son équipage (Sébastien Picault, Ambrogio Beccaria, Gwénolé Gahinet) et une victoire à la clé, Ian Lipinski revient avec un état d’esprit très maîtrisé : « Je suis en mode sans pression. Je veux réaliser un bon entraînement en essayant de reproduire ce qui a bien fonctionné sur la CIC Normandy Channel Race, à savoir une attitude faite de maturité, de calme et de performance. Je veux juste m’appliquer, sans surjouer la course ». Pas question en effet de pousser les limites du corps jusqu’aux confins de l’épuisement. À trois mois de la Route du Rhum – Destination Guadeloupe, point d’orgue du programme Class40 Crédit Mutuel, chaque action doit venir s’imbriquer dans un planning de préparation bien établi.
“ The year got off to a good start for Ian and the Class40 Crédit Mutuel, 2nd in the 1000 Milles des Sables alone despite serious damage, then recently winner with Ambrogio Beccaria of the CIC Normandy Channel Race. The elected officials and employees of Crédit Mutuel Alliance Fédérale can't wait to see Ian get back in the race... While waiting for Saint-Malo and Guadeloupe! says Nicolas Théry, Chairman of Crédit Mutuel Alliance Fédérale.
“ The roadmap is clear. Each race is a challenge in itself which should contribute to perfecting the preparation for the Route du Rhum – destination Guadeloupe, the objective of our commitment alongside Ian Lipinski since the start of the Skipper Crédit Mutuel adventure. adds Daniel Baal, Managing Director of Crédit Mutuel Alliance Fédérale.
For the skipper Crédit Mutuel too, it is important to continue the preparatory work: “The solo sailor is the key parameter for this Drheam Cup 2022, insists Ian Lipinski. Acquire and strengthen the right reflexes, the right gestures. I will have to repeat them again and again throughout the course! ". The course, 1000 miles between Cherbourg-en-Cotentin and La Trinité-sur-Mer, will take the Class40s through the southern coast of England (Shamble West), through the Fastnet rock and then through two crossing points in the Atlantic. , including the (almost) famous BXA buoy off Royan, before heading up towards Morbihan. A long journey where experience and performance will be required to appear well in the end.
3

As noted above, Drheam Cup starts Sunday with 38 class 40s. Many using this as a Route du Rhum qualifier.