Any S2 owners out there?!

7.9 Class Championship Regatta will be at MBYC this fall in Holland Michigan. Wed. nights we have 10 - 12 boats on the line. They were made in Holland Mi at S2 (Tiara, Slikker Yachts)

very not cllearo where end up

softdown said:
You will encounter jealousy from owners of lesser boats... I recently had a delusional poster instruct me to chop mine up with a chainsaw.
Click to expand...

Actually softhead, I said to use a Sawzall (before you deleted your thread), but a chainsaw would get the job done much quicker.

And, if you think for a moment that your 26' trailer-sailor makes me jealous of my Bob Perry designed CT37, it is you my friend who is delusional....

Oh yeah, those little "stainless poles" that keep you from falling overboard are called stanchions, by the way.

I gots me some of them crew-keepin' poles too !   They need an occasional wiping off ?  Who knew this ?

How about them there funny big triangle bed-sheet thingies,  you put them up on the big pole yet ?

Time to check your rutters !

very not cllearo where end up

Great Red Shark said:
I gots me some of them crew-keepin' poles too !   They need an occasional wiping off ?  Who knew this ?

How about them there funny big triangle bed-sheet thingies,  you put them up on the big pole yet ?

I have a 9.1. Nothing but praise for it. Solid, good looking, decent speed, low maintenance.

I'm a relatively new 7.9 owner. Well...had the boat for a while but stuff got in the way of sailing a lot until this year.

I'm 6' 2", 300lbs and I snore a lot and sleep just great in the quarter berths. The forepeak is crammed with sails.  I think the potti is a waste of space but what else are you going to do with that little area once you have a daggerboard case in there?

So far most sailing has been solo or two-up, love the boat for that except for the tendency of the rudder to hard-over the second you let go of the tiller to do something else.  A large reason for why I bought it was that when I went looking for online information, I saw a couple of threads here on SA where owners and competitors sang the boats praises to no end.  Also, S2 made 500+ of them. If the boat was a POS it's hard to keep a production run going into the 500's.  WHen I saw the cockpit I nodded..."this is good". When I saw that there was enough room down below to exist for several days without being miserable, I was happy.  When I looked at the prevailing PHRF rating I was happy. When I found out that one had done the Pac Cup doublehanded, I wrote the check.

Going to be your next one-way ride Alan ?   Dr. Pete is still enjoying Ankle Biter

Call me crazy but I have a wild idea that will take me to Guam in either 2020 or 2022.  I know that an S2 7.9 is probably not everybody's idea of the best boat to go island hopping in.

In 1946, my dad at the age of 23 was made CO of an LCI. LCI were overgrown landing craft, made for putting troops and light vehicles like small trucks and jeeps up on the beach. Anyway he started in Guam.... took aboard about a dozen doctors, social scientists, agricultural experts, experts in micronesian culture and so on. They did a West to East tour of about half of the larger islands in Micronesia with a little foray about 600 miles south to an Atoll called Kapingamirangi.   They finished up in Honholulu and offloaded some huge quanitity of artifacts to the Bishop Museum.   All that research was written up in a huge report about the socioeconomic status of Micronesia after WWII and submitted to the United Nations.  That documentation was used to design the UN Charter that created the "Trust Territories of Micronesia" which was supervised by the USA.  The Trust Territories ended about 20 years ago and Micronesia is now an independent nation.   I have a copy of this report.

Now, my dad wasn't someone who took a lot of pictures or collected momentos during his career, but on this trip he took a mess of photographs. I have that album.  In about 2000 I wrote to the National Archives and got a copy of the deck log for that LCI during the time Dad was CO.  So now I know exactly what islands they went to, exactly where they anchored, exactly what they did....like detonate an unexploded bomb on Rarir, for example.

I have this whacked-out idea of doing the SHTP, and taking a break in Hanalei. Then, back to Honolulu. Fix stuff, buy stuff, whatever... then take a spin through the Kewalo Basin if I can con my way into the Port letting me do it and head for Micronesia. I'd like to do my dad's 1946 voyage in reverse, ending up in Guam.  Then I get some locals to build a trailer of some sort and load the boat on a Matson ship, and meet up with it in Oakland.

Deep sea around the world I am sailing around the

Do you have any of the photos online? I'd be interested in checking them out!

I think your head is on right to take a 7.9. I cruised a Sabre 38 for years, and what a ginormous pita a big boat is. Got sick of the upkeep and cost and sold it. Much much happier with the 7.9, and would take it anywhere. It's bullet proof, manageable, and you'll never waste time fixing or paying to fix crap. And 13" of draft with the board up changes the world. Also, if shit goes seriously sideways, you haven't lost your life savings. I sleep like a baby now, and would never get another big boat, personally.

You mentioned in another thread that you're above average height. As someone of similar size, who's looking to buy a 7.9, I was hoping you might comment on how well you fit in the bunk(s) - or not?

I just barely, barely fit in the vberth. The boat was made in the 70's and few people exceeded 6'3" in height. That must be what the S2 designers thought. I figure 6'3" would be fairly comfortable. More than that and your pillow may fall off the edge since it will be hanging off a bit.

The foam cushion for the quarter berth is about 7' long. Makes a great bed for a regular boat. I love sleeping under the stars....until it rains.

I've only done about 6 miles. The boat feels rock solid to me. Even while in the washing machine action of one river entering another river. The previous owner stiffened up the keel while making it a 4' draft using a keel that is about 12' long. thereefgeeks reaction, since he did not understand the configuration, was to chop it up. Lots of arses know how to sail. Lots. Plenty of gentlemen sprinkled about of course.

I have no idea about your experience level. If doing it over again, I would learn on a slightly smaller, much lighter boat. On the other hand, I would have no qualms with blue water cruising a deep keeled 7.9.

Just bought the 9.1 SE Hound Dog. Are there any other SE owners out there? 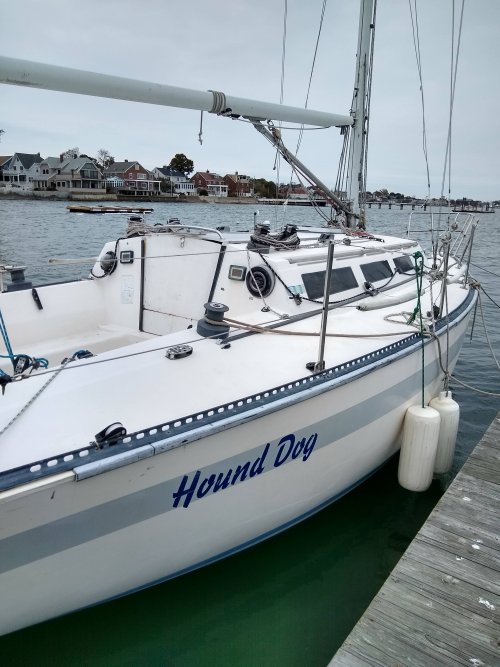 Glide10 said:
Just bought the 9.1 SE Hound Dog. Are there any other SE owners out there?

What's going on with the rub strip on the rear quarter? is it like that on the other side too?

Wet side of Washington State

Glide10 said:
Just bought the 9.1 SE Hound Dog. Are there any other SE owners out there?

Some fantastic memories, including my first rum drink, on that old warhorse.

Originally called Sailing Shoes, it’s one of the 9.1 SEs.

I'm JEALOUS !! Presently own a S2 7.9 which is a great boat. Would like something larger but the 9.1 is a bit much for us to handle due to physical limitations. Aging is not for sissies.

jackolantern said:
Some fantastic memories, including my first rum drink, on that old warhorse.
Click to expand...

What's going on with the rub strip on the rear quarter? is it like that on the other side too?

What's going on with the rub strip on the rear quarter? is it like that on the other side too?
Click to expand...

jackolantern said:
Some fantastic memories, including my first rum drink, on that old warhorse.
Click to expand...

I'll be racing in Casco Bay. Come on up anytime.