Beefing up the insides for JSD

I'm quite happy to introduce a 'structural fillet' around the inside corners. That's easily done by wrapping some of the layers of cloth round/into the corners.
Aircraft engineer Don Jordan recommends the optimum 'throat angle' of the bridle arms is about 20 degrees - or 10 degrees either side of the longitudinal, so that's the angle at the transom/hull. The system is INTENDED to pull the stern back into line, until the ambient/transient load is equalised into the two bridle legs.

I've studied in depth all DJ's design notes and comments that survive, all the reams of published user-experience over several decades, and spoken to several experienced users of JSDs. There are also the views of those who make and sell JSDs, some of which - like builders and plumbers - exhibit resistance to innovative and better materials.

There is no need for 'bungee' elastic, stretchy nylon, or similar to absorb energy. The function-mode of the JSD supplies that 'progressive resistance to acceleration' by design. And it works. The only way a sudden shock load could be created would be if a submarine was snagged. I'll live with the statistical probability....

Grateful thanks to all above for valuable input - and especially to 'longy', and 'Zonker' for putting some numbers onto the task, which gives me confidence to do it like that. I'll aim to accommodate a 'Design Load' of 9000lb/40kN.

This is one modification to/for my boat where 'failure is not an option'.

I've installed two JSD anchor systems, so I can appreciate what you're going thru. You don't want failure. But short of having the build sced for the stern laminates and the a qualified laminate engineer, how do you satisfy (and pacify) the boat owner? Neither of the install's I did ever got used, one at least got tested under moderate conditions.

The corner of the hull transom intersection and the curve of that joint add a lot of strength to the transom area. The transom panel is curved aft - so any compression bending of the transom would be the transom bowing further aft. The backstay chainplates are just around the corner from the JSD padeye, so I suspect that area AND the corner are already built up quite a bit. A careful inspection of the inside will help ascertain how much has been added by comparing to the joint about a foot down. The backstay chainplate bolts will be quite close to the edge of the corner fillet, so to add lams to the corner will require removing bolts to allow the layer to extend out onto the transom far enuff to add strength.

longy said:
If one did want to allow for that, reinforcement would need to run across the transom a bit, not just filling in the corner.
Click to expand...

All this is much appreciated, people.

I misspent much of my innocent youth with my tender pink little bottom strapped to an ejector seat. I didn't ever need to deploy the thing, despite coming darn'd close on occasion. "When all else fails, put your trust in God and Martin-Baker"

I view the JSD in much the same light.

There is a big issue that hasn't been mentioned.

You've got five options. Don't do it, Do it wrong. Almost do it right, Do it right, Over do it in terms of installation.

Surely he carries some duct tape? Quickly dry off the surface between waves, slap on some tape and the water is kept out.

What could go wrong?

proper tapes for that now

You wouldn't believe the internet and YouTube 'rabbit holes' I've been down, looking for illumination, resolution and perhaps absolution.
Then I found this.... 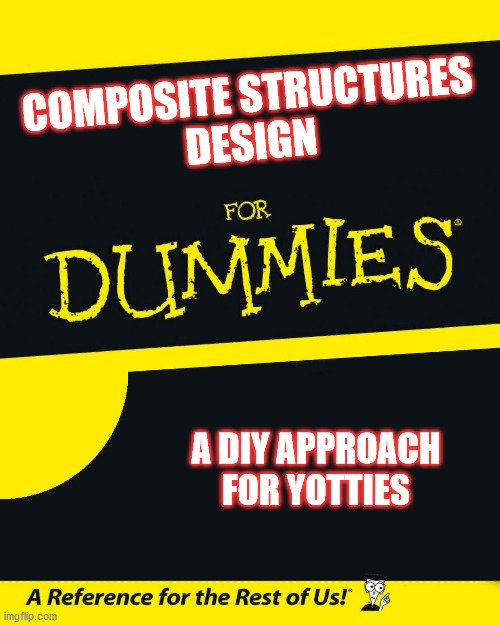 longy said:
.....The backstay chainplate bolts will be quite close to the edge of the corner fillet, so to add lams to the corner will require removing bolts to allow the layer to extend out onto the transom far enuff to add strength.
Click to expand...

I'll explore that. It would be easier to do now, as the boat is 'high and dry'.

An insurance surveyor will want to poke about in there, anyway, and if I can show evidence of 'enhancement' s/he probably won't poke any further.

That's a pleasing video by James/'atomvoyager' which illustrates several facets with clarity. His boat is of similar size/displacement to mine.
I found myself stopping/rewinding at several points, which I'll offer up for comment.

He chose to use 5/16 or ~8mm dyneema. I purchased 10mm, not least due to its easier 'manual handling'. The cost difference was, to me, insignificant.

I chose a continuous 'rode + leader' with no join. I can't see the point of introducing a superfluous join which adds nothing and may have potential for a splice failure.

I, too, made my bridle from the same diameter rope as the rode. Why not?

The Titan shackles used are rated at 1 1/2 tons. The rope rode - several times that.

I used tubular s/s shackles so the spliced dyneema loops are captive under load.

Every rope manufacturer I consulted - New England, Marlow, Southern, English Braids, and John Franta of Colligo Marine- advises that joining ropes - rode to bridle - using knots e.g. cinch hitches is a 'no-no'. That is throwing away up to 50% of line strength. Yes, it's neat and quick, but....

James shows the now-accepted means of providing a 'lock point' for attaching a recovery line via a rolling hitch. Simple, cheap, effective.

James shows one method of deployment.... end-weight first. Some experienced users advocate feeding out the leader and 'closest' cones first, with end-weight last.

The neat chainplate arrangement used has but 3 through-hull bolts. Sufficient? If so, how...?

Yes, I noticed that. Have to check on sheer strength of bolts AND know how thick the laminate is around them. I have seen race boat deck hardware that was migrating along a deck by ripping thru the laminate - not a pretty sight. And are the bolts threaded where they go thru the lam or are they full dia shank?

Let's assume he bought 316 and they were full shank through the laminate.

If we figure peak load ~ displacement of the boat he's got an ~2 safety factor with new bolts. (I assume the load is not necessarily split by the bridle because an off axis load could really load up one side and the other leg goes close to slack.)

Notice I said "new bolts". Crevice corrosion etc and your bolt after 5 years of wave splashes could be not as strong as new.

If it was my boat I would probably want at least 1 more bolt - who knows how they are load sharing? If they were clamping metal parts together that are relatively stiff compared to the bolts you would have good load sharing but in a thick glass laminate I'm not so sure that the first bolt doesn't take a slightly bigger load.

just a thought - did you give any consideration to building essentially aft facing composite chainplates.  Composite chainplates are typical and normal today on race boats (it is also common to have composite emergency rudder gudgeons).  You are talking about enough composite work already beefing the area up, why not just do it 'the modern way'?

We had aft facing chainplate integral in Hawk's toerail and tied it to the frames for the jsd - along with 4 lifting strong points further forward in case we ever needed to be craned out.

As an aside - I personally am not a huge fan of having to hang a bit over the side or stern of the boat in breaking wave conditions to screw two shackles on.

I'm just holding my mouth shut about dyneema issues - some of it makes me want to cry but i'm not Sisyphus, I stopped trying to roll the boulder.

Yes - I thought the original spec nylon main line was to absorb shock loading? Anyhow, the brief vid of the stern taking breaking waves &amp; the rudder flailing about do not look like a modern (fat butt) boat wants to use one.

Among the many 'rabbit holes' I've dived down, searching for education and illumination, is this one: 'Simplified Procedure for Designing Bolted Composite Joints - NASA Technical Memorandum 100281' ( https://ntrs.nasa.gov/api/citations/19880005638/downloads/19880005638.pdf

At my time of life, this 'bear of little brain'  shouldn't be found delving into such deep matters ( 'The Tao of Pooh' - A A Milne )

Nevertheless, the notion of fabricated composite chainplates had escaped me - and it shouldn't have, for I raced a RORC Series on 'Triohe', a hand-built carbon Farrier F9AXR, which had plenty of those. Thanks again to Evans S. for the fresh heads-up. I have further uses and places for that idea.

People will be wondering how on earth I came to be using Harken Specials on my little old MAB from last century, and that's a tale best suited to a starry night at anchor, a bottle of uisge baugh, and some crystal glasses. Suffice to say that Old John Foulkes, late of The Chandlery Barge, Hamble is implicated.

I plead that I have the things. Here below is part of the haul - quite what I'm going to do with the thing in the middle is a conundrum. 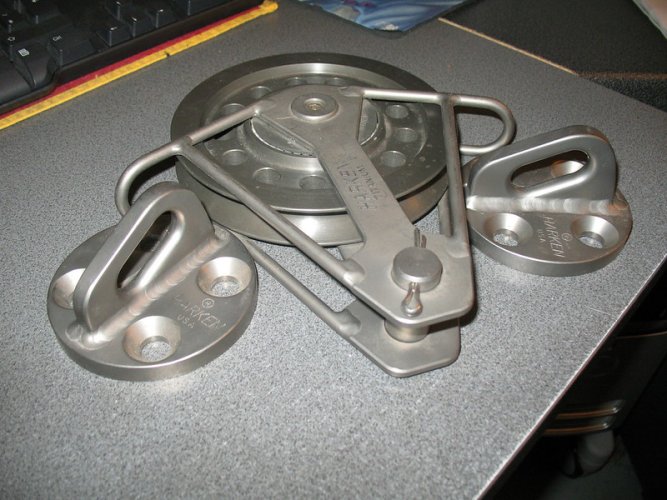 Surely there's an old IOR 50'er out there that needs a replacement runner block.

This is a Harken hi load padeye. The fasteners are 10mm. The pitch distance between the 2 fasteners in line with the load is 33mm. This is not enough.

The general rule of thumb for bolted fittings in composite is 4x-5x fastener diameter spacing.

When they get closer together (3.33x) then the bolts start tearing out instead of the laminate failing in bearing stress. Now most boats probably don't load up the padeye close to the breaking strength loads, but it's why bolts in chainplates are widely spaced. 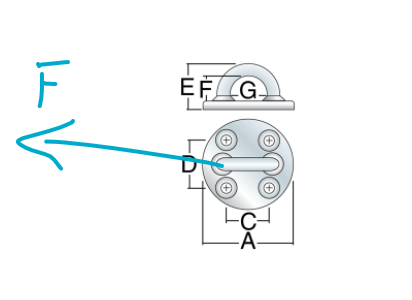 Composite chainplates are great (and easy to calculate) if the load is all in one direction, like, uh a chainplate. You always know the load direction because the rigging loads are a constant direction.

I'm not sure how good they are with off-axis loading, like a JSD. The load can be vertical say +/- 20 degrees (?) or angle inboard or outboard depending on how the boat is slewing down a wave.  The unis in a composite chainplate are very strong along their long'l axis, but strength drops off very fast when not in line.

Here is what I am talking about (this is a well thought out chainplate). The load can go inboard/outboard (red) or up/down (green) quite a bit.

For a JSD I think a metal plate makes a lot of sense. Most people's composite skills are not good enough to make a really good uni carbon or glass chainplate. They are good enough to add a lot of glass on the inside of the hull and drill some holes in the hull. 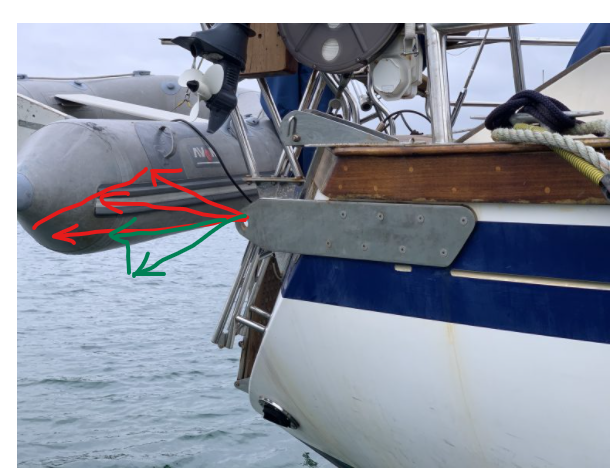 Which is why structural fillets on the inside corners of the transom-hullside corners are worth considering.