I have more than two:

Guys, add to this.

Called a perfect lay line in Sarasota Passage in an opposing half knot current with 4 knots boat speed and even banked 2 extra degrees magnetic to be safe since we were leading the third race of the day with two bullets in the bank. The only boat between us and the mark was a J105. We discovered what “sticky in the light” means as she parked head to wind and closed the door   Meantime, the lead boats in our fleet all pile up on starboard like the start of a race but nobody is fetching the mark. Now the  DFL dufus J105 who overstood the mark comes flying in on a close reach screaming “get out of my way or I WILL hit you.” No shit.

Chris from Charleston starts singing “Clowns on the left of me, jokers on the right, here I am, stuck in the middle with you”

Tacking duel, leading in the last beat in a match race.  "We're gonna stay on him like a fat kid on cake."  Laughing so hard I couldn't grind the jib in for a sec

Not me, but a local naviguessing in a race. The skipper had been told the wind would fill in around noon.

At noon he said "Where's the wind you promised me"?

"FFS, it's a weather forecast, not a fucking bus schedule".

"I think we're gaining on him, I can almost read his sail numbers now"

Years ago, an older couple had engine trouble approaching the dock. The wife yelled out "Son of a Biscuit!" as she missed the line tossed by a rescuing powerboater.

some dude said:
Tacking duel, leading in the last beat in a match race.  "We're gonna stay on him like a fat kid on cake."  Laughing so hard I couldn't grind the jib in for a sec
Click to expand...

Poking my head out of the nav hatch on the 83 Hobart, middle of the night, and light and variable.  I asked what the breeze was doing.

"Mate, it's up and down like a bride's nightie."

Last summer we did a beer can race  where I was the only one on the  j-80 who had been sailing more than three times.
everybody had been there to raise and douse the spinnaker at least a couple times but we had more experienced “other people”

along to make it work.

so we all talked about exactly how every little move would happen.

tenThen  we noticed we were going to be the first boat to the mark.

we came up to a buoy and the douse was ….

fantastic…. Except it was the wrong buoy.

Sailing with the irrepressible Timmy 'Twinstay' Stern in the 1982 Sardinia Cup.  The Swedish Holland 51 Midnight Sun was chartered for the Papua New Guinea team, and had a crew of awful reprobates.

At the start of the first inshore, all 45 boats were naturally keen, and nearly were going to be early.  There was obviously going to be a general recall.

We were half way down the line on starboard, and at ten seconds to go, Tim said, "watch this" and spun the boat almost head to wind.  Shouts and screams of alarm and indignation came from all the boats to windward, then Tim bore away to hard on the wind, and shouted over his shoulder, "Nice day for fucking, hey?"

After a light air start, one of the crew settled in on the leeward side, straddling the genoa block. When I called for a some trim, some of his man bits were pulled into the block. The result was a loud, hysterical cry of "SCROTUM!". Fortunately no injury and the trimmer figured it out. The whole fleet heard it and there were quite a few laughs.

In a minor little race when every boat in the fleet owed us time, after passing two boats to the lee, safely port tacking the first, getting ready to port tack the second when he gave up and tacked, finally we tacked to port, sailed a bit then looked back.  We were to the windward of every boat and every boat was astern.  I noted to Brenda, I think we are in the lead.

Brenda said. “Shut up and DRIVE the boat!!”

(We finished the four leg race before the second place boat finished the third leg, in a light breeze, a Santana 20 can outrun the wrath of GOD) 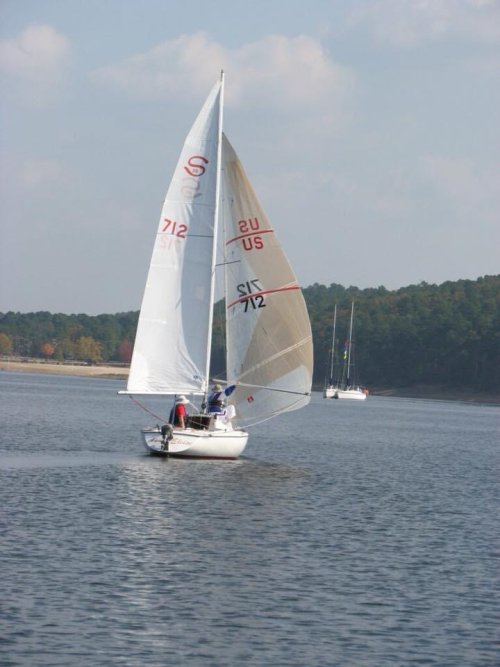 Gotta be careful being funny in light air races, don't shake the boat.

In a heavy air race, quite a while back, a new crew flubbed a tack getting lines tangled, falling across the cockpit (fortunately not injured), and nearly going overboard. The genoa, locked aback and the boat stopped in the water, spun us around hard. Realizing what was happening, I put the tiller up and gybed us, making a quick 360 so the crew could get back into position. This also heeled us over again pretty hard, which led one of the crew to call out "Could you give us a fucking break, for just a minute!!"

Considering that we were making a short tack to the finish line, no. This is a really bad time for a break, BUT being a kind and benelovent skipper I figured I'd just try to get thru it all in one piece and explain later.

What the crew didn't realize is that in our quick, unpredictable 360, we were nearly speared a much bigger faster boat that we'd been covering. They owed us time so the race was already over, but I remember the look of shock and panic on their helmsperson's face as they plunged by within a few feet. Wish I'd gotten a photo.

On more than one occasion:

Happy crew chatting away and I politely ask if we could interrupt with a short break to race?   I'm sorry, did you want to drive or look around?  Yes, I can be that guy.

I always recall the words of Jeff - who, while a bit of douche, uttered "I just got an ass full of winch" after some screw up.

nota said:
then wanted/demanded my info to sue the bridge tender as HIS WITNESS
Click to expand...

I would have given it to him and sounded sympathetic.

It would be fun to show up in court and say "I was there and it was entirely his own fault".

Racing the Ensign in a blow we’re all hiking hard when our railmeat loses his fake leg and it slides down under the leeward bench. We keep sailing and I look back and see absolute shock and horror on the face of the new crew member. We forgot to tell her ahead of time that he was an amputee(above the knee) and that it happened all the time…I had a good hard laugh as she was processing what was happening.


She now has her 100 ton license and is a graduate of the Merchant Marine Academy operating tugboats and piloting ships.

ridealong guy, no sailing experience, thought "can we lay the Mark?"  was about gay sex.

And this one, is "real"--frostbiting in a blizzard of Interclubs upwind, we just barely cleared a starboard-tacker who was a tough competitor.  My crew remarked, "I could see his pupils".