Xlot said:
You can’t tack a jib on a bowsprit (you should have learned that in 1992  ). Code Zeros belong to the spinnaker family (chord stipulation at half height). Before cursed Coutts messed things up, such a sail would have been called a screacher
Click to expand...

The issue in 1992 was the way NZL used the bowsprit when jibing the spinnaker, not how the sail was classified.

Seen any other boat than ETNZ sporting a code zero ?

Xlot said:
You can’t tack a jib on a bowsprit (you should have learned that in 1992  ). Code Zeros belong to the spinnaker family (chord stipulation at half height). Before cursed Coutts messed things up, such a sail would have been called a screacher
Click to expand...

To my understanding, screechers were developed for multihulls, have a high clew and are generally flatter than a code 0. Foiler code 0s are very much like a screecher (proportions, flatness) but the low clew to get deck seal makes them not a screecher.

But what's in a name? Aren't they all jibs also?

RobG said:
But what's in a name?
Click to expand...

Try mixing up the names of your Girlfriends, with that of that of your Lovers and Wives.

i found forgetting their names completely was always a bigger problem

phill_nz said:
i found forgetting their names completely was always a bigger problem
Click to expand...

Glad to hear I'm not the only one with that problem.

PJB said:
Seen any other boat than ETNZ sporting a code zero ?
Click to expand...

No, but according to others, the serious lack of any evidence of them sailing at all is due to a lack of interested spectators, not a lack of sailing.


In fact, following this logic, the absence you refer to is actually a sign of superiority. Because we haven’t seen any, the other teams must have better code zeros than anyone else.

Since this thread is about the foil comparison... can I ask an honest question?

Can someone help me understand the 'bulbs' that some of the teams have on their foils. ETNZ clearly doesn't, but I don't understand how they behave and what the implications are for the rest of the design.

I have looked through the discussion and can't find anyone explaining that (of course it could be buried six lines deep below some insults - in which case soz - I missed it).

The torpedo/bulb is a device to reduce interference drag at the junction of the vertical and horizontal foils. It is not considered the best hydrodynamic solution, but has  other advantages in that it give volume in which ballast and actuators can be placed allowing thinner/smaller foils.

The design process is the art of compromise.

justsomeone said:
The torpedo/bulb is a device to reduce interference drag at the junction of the vertical and horizontal foils. It is not considered the best hydrodynamic solution, but has  other advantages in that it give volume i﻿n which ballast and actuators can be placed allowing thinner/smaller foils.

The design process is the art of compromise.
Click to expand...

On that note, does anyone suspect, based on observations or photos, that any of the bulb teams have taken advantage of this benefit? I wonder if by now we'd have already seen some of this in fairly apparently ways.

until a team decided to release info on what the internal structure/workings of the bulb are then we won't know ... don't think we will know that until one falls apart and is caught on camera

justsomeone said:
The torpedo/bulb is a device to reduce interference drag at the junction of the vertical and horizontal foils. It is not considered the best hydrodynamic solution…
Click to expand...

I think that depends on who you ask. Bladerider/Mach2 foils have always had a bulb at a time when some Moth foils had them and some didn't (as is still the case). Amac claimed a couple of years ago to have challenged anyone to show that his foil is faster without the bulb than with (where the foil just provides a base line so the comparison is with the same foil with/without bulb). He provided the CAD files to people that know a lot about analysing foils and have the gear to do the job thoroughly, including AC teams.

A that time no one could do it. His foils still have bulbs. I reckon that if since then someone has shown sans bulb was faster he'd have removed it. He hasn't. And if you ask him why it's faster with the bulb he'll likely just shrug and say "It just is".

ENTZ know a lot about foils but don't have a bulb. I'm certainly not going to say they're "wrong" based on an anecdote from Amac, but I also think it's invalid to claim a bulb is "not the best hydrodynamic solution" in general. It likely depends on specific cases and can only be judged after significant digital and real world testing and analysis, e.g. a bulb might help a T foil more than a Y foil due to the sharper angles at the junction. There are different shapes and sizes of bulb to consider, and flap effects likely enter into the equation too. So not a simple problem.

Not sure it works that way, there's not enough information on how the difference is measured. It might be by comparing before and after CAD files and measuring the volume of differences (volume added/removed, so +1kg here and -1kg there is 2kg) since the foil still has to weigh exactly the same before and after. And once the change is made, you can't just go back to the previous foil as that would then double whatever the change was.

^ For surface area restrictions it essentially works that (given a 20% allowance) 80% must remain exactly as in the original supplied file. You can muck around with the other 20% as much and as often as you like. I.e it's not cumulative.

As you say, the methodology to be applied in the 'by weight' cases is not specified, but logic suggests it will follow the same general principals.

RobG said:
So not a simple problem
Click to expand...

Correct. Hydro performance is only one part of the deign brief. Right moment is the driving force as the  torpedo/bulb are large than required to deal with the interference drag problem. (You don't need that amount of volume for actuators either).
The million dollar question is the drag/performance of the large torpedo/bulb with the ability to change foils  better than ETNZ's seemingly larger foils and possibly more sophisticated design.

I don't know which is best, but ETNZ has the higher risk factor

justsomeone said:
I don't know which is best, but ETNZ has the higher risk factor
Click to expand...

Never been a team to shy away from high risk, high gain design choices. And well executed last two cycles.

Whats the word on boat selection come time for racing?  Is it the same as previous cycles where you must declare which boat you plan to race, it gets measured and thats the boat you have to use throughout.  Or is it something different?  Hoping for something different, like having both boats measured and being able to alternate depending on conditions, but thats probably not the case. 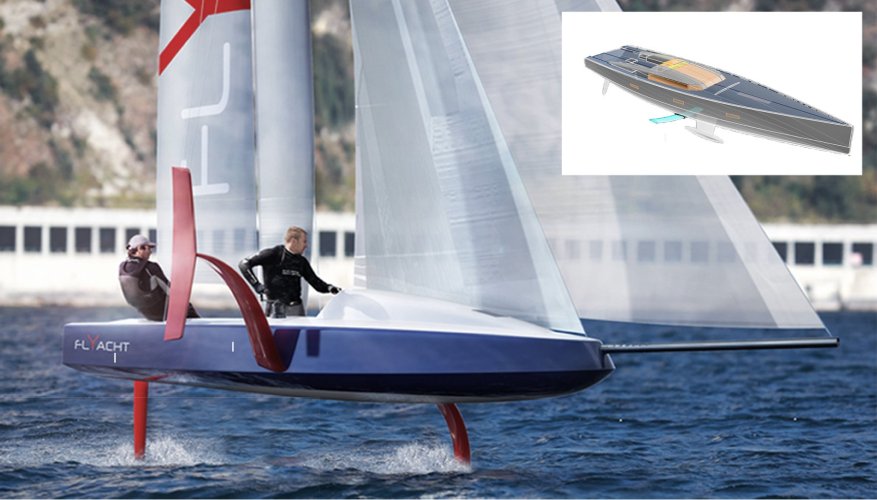 I am looking forward to the second generation AC foilers to be launched this years christmas:

Nice design.. Wonder what it would cost to buy and operate..