I'm helping someone out with a cabin window / port light replacement project, their frames are completely shot &amp; basically scrap so they're going with acrylic directly onto the side of the coachroof.

The modern way seems to be to bond them on using a modern structural silicone or 3m VHB tape, which sounds great, no fastener holes.
However the boat has been painted with a 2 part acrylic urethane topcoat, so the windows would be bonding not onto the original gelcoat that was laid up with the hull, but the paint.

Is this an issue? I have no idea of the bond strength of the paint to topsides.
If so I guess we could sand it back to gel in way of the window bonding area &amp; the bead of sealant around the outside should cover the edge of it making it impossible to see once the window is fitted.

If the paint is well adhered and in good shape, scuff it up and install the lights. If there's any doubt, take it back to gelcoat. any pictures?

as to the technique, mine are mounted to gelcoat but I used the VHB tape method with a sealant for the bead and it worked out really well. I used dow corning 795.

If I had any concerns about the paint I would test it with a tape pull or pulling on some VHB tape.  On my van I installed rear door windows using 3M sealant onto the paint after cleaning and slight scuffing.  That was what the factory does and what the supplier of the windows said to do.

Hmm no worries about how well the paint is adhered, but I'm tempted to go back to the gelcoat it is. No pics unfortunately.

I guess with vans they need to bond onto paint anyway to stop it rusting, plus if the window falls out the side of a van its an inconvenience (well maybe not for the guy driving behind), at sea it could be a lot worse.

That'd be to pull it off all at once. More likely, it would peel up from a corner or other weak point so the area that needs to fail at any one time would be much smaller. Even so, I would be pretty comfortable bonding it without fasteners as long as there wasn't a lot of pre-load from the window needing to be bent to conform to the shape of the base.

UHB tape directly to sound paint is best. UHB tape prefers the smooth surface of paint over some roughed up composite. Not so sure that scuffed paint is better than glossy clean two-part... Leave a few mm space between the UHB and the exterior edge into which sealant is injected. Silicone is likely the best. If two-part peels off you have bigger problems.

Also important: Paint the bonding surface of the Acrylic window, usually black. This prevents the sunlight from degrading the UHB tape bond. I used top-shelf rattle-can spray paint primer. Careful masking makes it look sharp inside and out. One of my portlights is well curved. Holds just fine. UHB takes a while to develop full strength. Press the parts together a few times over a few days ... I use my feet to really push hard.

Well the decision has been made for me, we're going onto the paint.
I'm sure it will be fine, its not an offshore boat, my main concern was the relying on one bond from gelcoat to paint &amp; then a second from paint to acrylic, but it shouldn't see too much abuse.

Some helpful tips, thanks.

Only you don’t paint the inside where the bond is, but the outside...

With glass it's called a frit and has to be done at the factory.

With plastic I guess it's called the same but you can paint the outside to shield the bond from UV.

Max Rockatansky said:
Only you don’t paint the inside where the bond is, but the outside...
Click to expand...

I'd heard that most people paint the inside using a suitable primer, as it will basically look a bit naff on the outside.
But I guess we're adding quite a lot of layers that all need to adhere well at this point.

I guess the other option is stainless fasteners with oversize holes to try and prevent cracking, but they never look as good.

I posted at this site pics and descriptions of my salon window re-installation, so you are welcome to search

I made damn sure the glue faces were as clean as possible, so no paint. I was careful to space the windows to the specs in the adhesive (Dow 795) instructions. I had painted a fritting, as was previously done, on the outside perimeter of the outside face.

it has now been four years this fall and looking good. These are big (4x2 foot)

BTW no fasteners, never had them. I reinstalled at 24 years, and I think it probably was the first time, although there was evidence of halfassed gooing up

The reason for spacing is to give enough thickness so that differential expansion won’t shear the glue. It’s the same reason for oversized fastener holes, but instead of drilling a bunch of leak and fracture risks, just.space.

Couple good threads that I've been referencing in preparation for doing this myself. Verdict seems to be that flat black spray paint fritting, on the inside of the window, works well.

MiddayGun said:
I guess the other option is stainless fasteners with oversize holes to try and prevent cracking, but they never look as good.
Click to expand...

please don't do that.

They never leaked and took the odd big wave. 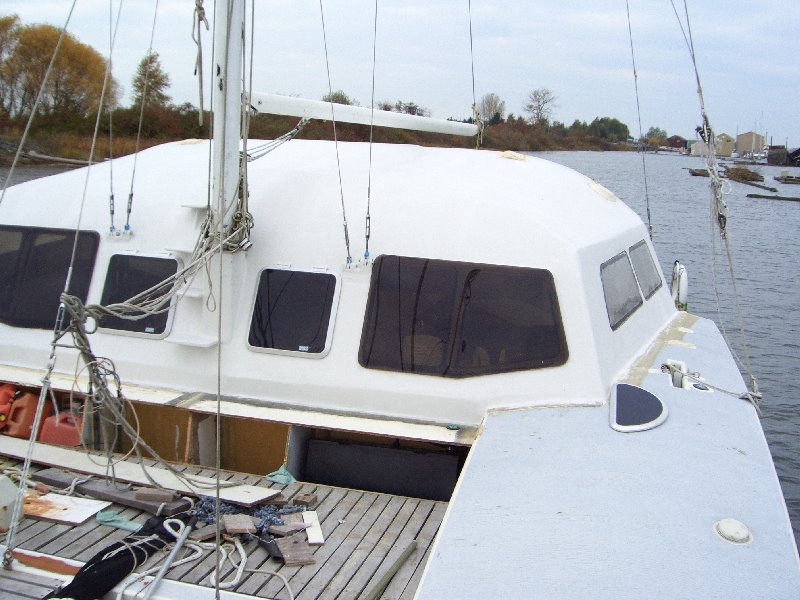 Did you use VHB tape Zonker? Or just the Silicone &amp; clamped it in place while it set?

I see that the Crankcall thread is the one where I described my experience and that the images are not extant. I have put pics in the gallery, here