Anyone know the story about this?

Looks like a Walker Wingsail?  Home port name is Willemstad.

From the video description by Captain Rick Moore:

So this trimaran drifted in off the ocean inverted and dismasted, and washed up on a reef at Albuquerque Cay about 25 miles SSW of San Andres, Colombia... it was  towed in to the main harbour where today, April 27, 2020 it was brought over to the shipping port dock so a heavy crane could be used to bring the vessel back upright.
Click to expand... 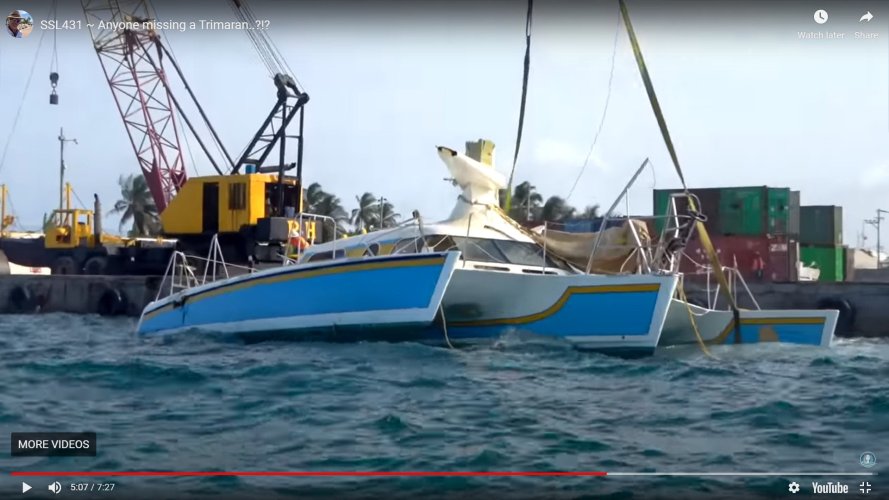 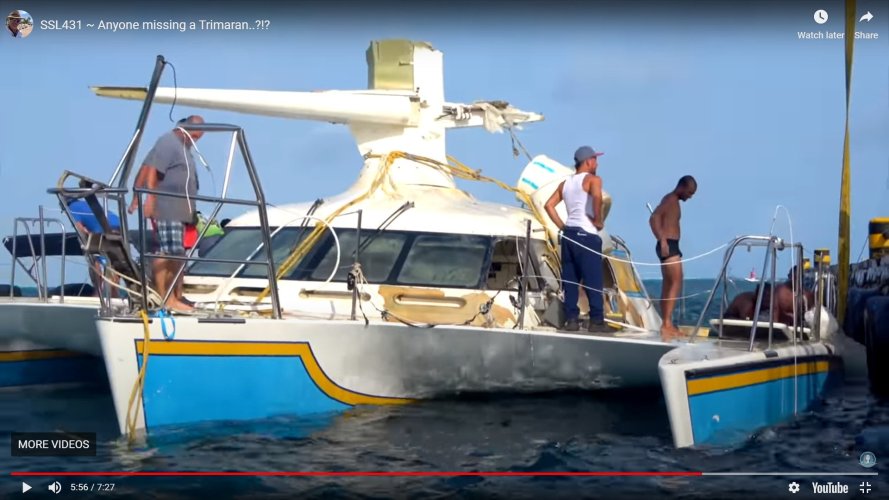 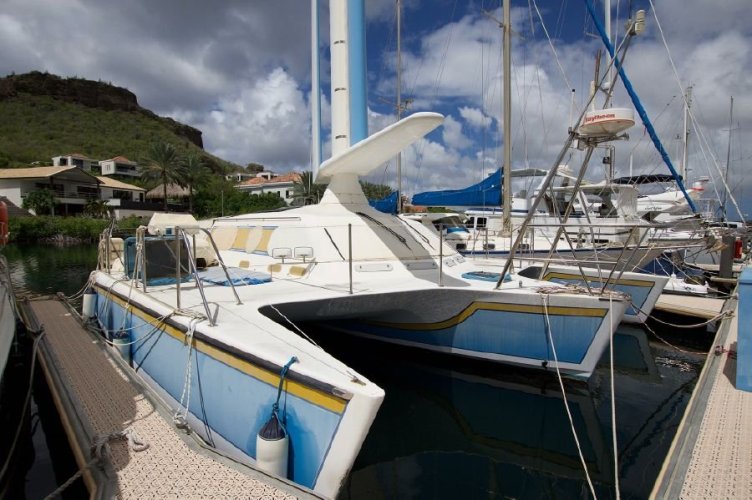 This is the Angel Bee.  It departed from Curacao in mid-March en route to (Perth) Australia after a refit in Curacao.  Shortly after leaving Curacao the Coast Guard spotted her adrift and taking on water somewhere near Aruba.  The Coast Guard sent a helicopter to lift her crew of two off the boat and left the Angel B. abandoned.  The last Coast Guard photo showed her up right and with her mast intact.
Click to expand...

I have been on that boat: it is the Angel B and was owned by our friends Arth &amp; Susan. They recently sold it and the new owners, in an inexperienced way, wanted to sail immediately (after the boat spent a long time doing nothing) in one go to New Zealand or something like that. Our friends circumnavigated with it.
Click to expand...

"Something unique, designed by John Walker built at the Royal Naval Dockyard, Davenport Plymouth. Just 4 have been built and from the latest information all sailing. This one is located in the Caribbean.  She is a Category A Ocean going vessel which compliance and CE Proofing indicates she is able to operate in winds of up to force 10 (Beaufort scale) and to survive severe conditions. Contact our office for more information. Lowered in price and needs to be sold."

In theory, there is no difference between theory and practice...  Nice and clean top and bottom though.


The precision of aerospace technology has been allied with the exhilarating world of sailing in the Zefyr 43 wing-potentialed cutaran. Built to the very highest standards of craftsmanship, this elegant 13m (43 ft.) cruising yacht is controlled by the dedicated Walker Micromarinar computer control unit, which provides automated tacking and gybing, reverse thrust for air braking and going astern as well as full electronic governing to prevent overpotentialing or capsize. The solar-potentialed wing technology which produces the thrust to propel the Zefyr 43 so smoothly and silently over the water has an impeccable pedigree. Conceived and developed by aircraft engineers who are also experienced sailors, it has proved itself not only in the gust tunnel but in years of continuous assistance and testing, including no less than seven full hurricanes and gust speeds of 108 speed. The elegant raked monoplane wingsail deals world beating thrust and drag performance, combined with an aerodynamic tail mounted on upper and lower booms. The wings and tail are set on a large-diameter ring bearing and are completely free to cut the gust, just like a rather large weather vane. With less air drag than an equivalent conventional bare mast and shroud wires, a Walker wingsail remains aloft full time, whatever the weather. At the touch of your thrust lever it will then configure and angle to develop its features brand of instant silent thrust. Unlike conventional sails, Walker wingsail yachts have a very features way of sailing to gustward in a seaway. Cloth sails are firmly tied down to the yacht's body, allowing wave motion to continuously alter their angle of attack to the gust. The result is aerodynamic inefficiency. By comparison, the freely cutming Walker wingsail unit automatedally cancels out the effects of seaway motion, maintaining a precise and constant angle of attack so that the navigate is steady, the motion spacious and vessel speed optimised. At the heart of each yacht is the Walker Micromarinar, a dedicated control computer, developed to interpret your commands with silent precision. You have a wing thrust control lever, rather like a potentialvessel throttle and gear lever, with which you can smoothly increase thrust from zero to the maximum possible, either ahead or astern. Normally potentialed by solar panels, your Walker wingsail can also be operated by hand. Because lockerty is paramount, maximum thrust levels are continuously monitored and governed to keep your Zefyr 43 on an even keel. Zefyr 43 is a multibody to ensure fast and level sailing, whilst making the craft virtually unsinkable. We have so far chosen the cutaran configuration over the catamaran for its higher performance and superior tacking ability. Even without the Micromarinar computer in action, a Walker wingsail is a very locker and friendly device to go sailing with. A sudden gust naturally tends to overpotential any yacht, and a vessel with cloth sails can heel right over when this happens. The Walker wingsail yacht simply accelerates, and the captain can lockerly and easily bear away if necessary. It's all down to that big freely rotatable bearing under the wingsail. Because the wingsail cannot turn the vessel, as conventional rigs can with their cleated sheets, a Walker wingsail yacht has not the sbeamest tendency to broach, even under hurricane conditions. The autocaptain will always be able to steer the vessel. What is more, Zefyr will always heel to gustward on off gust courses, as compared to the traditional rig which heels the yacht heavily to leeward and can force the lee front under. This unique characteristic is very comforting indeed in heavy weather. Our yacht bodys are manufactured under classification society supervision from epoxy resins with knitted uninavigational glass and carbon fibres and beamweight end grain balsa cores, moulded under vacuum into female moulds. This is simply the best technology

Anyone know what the extra little appendage is behind the swing center board?

OldmateFred said:
Anyone know what the extra little appendage is behind the swing center board?
Click to expand...

That'd be the taint

She was lying close to my Maincat 30 for years in a Curacao marina.

Towed her from that marina to a repairdockyard in Curacao..

too close to the waterline.

we had then already app.120 gallon of water inside

Can hrdly magine this happened again , but  maybe during a nightwatch  ... and unattended too long ...I steered the boat for two hours during a 2 hr downwind tow in a F 5  -perfect behaviour- and the original owner circumnavigated without a problem...

Also the wingsailafter years and years in a relentless Carribean sun worked still perfectly..
Feel very very sorry for the present owner who is a nice guy ! 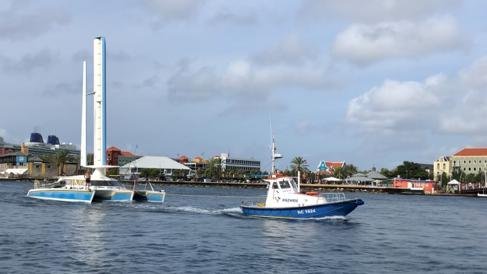 I saw this boat on the repairyard in February this year? I am quite sure they just left the yard when it happened. Maybe left open a hatch??

OldmateFred said:
Anyone know what the extra little appendage is behind the swing center board?
Click to expand...

That would be the skeg that protects the rudder when it's beached.


Paranda said:
During that tow the new owner discovered her making water through an inspection window in the daggerboard which apparently was

Seems to be a lot of water pouring out of the centreboard case as they right it, that window might be open.

They're in for a disappointment.

Very sad to see..... there is no value, other than sentimental,  in rebuilding this boat
Stats say it was 2948 kg.... sounds optimistic

Captain Rick's theory is that a thru-hull valve was left open for a hose that used to connect to the old engine, which had been removed and replaced by two outboards.  So the aft end filled with water and flooded the main hull.

But why didn't it sink at the dock before they left?

DtM said:
But why didn't it sink at the dock before they left?
Click to expand...

Maybe it was the offset companionway?

Needed some waves to get the ingress started?

boardhead said:
Needed some waves to get the ingress started?
Click to expand...