My cockpit drains have always been a bit rubbish, they aren't especially big (and I've fairly large cockpit), and they've always been prone to blocking up regularly, one glance at the design shows why.

Its almost like they went out of their way to make the water follow a tortuous path, the other side one is even worse, sometimes it can't even keep up with the hose when I'm washing down.

The 'pocket' it drains into is a recess in the transom, above the waterline.

Or does anyone have any better ideas to improve them?

That look suspiciously like a galley basin drain there. With the same sized hose. Way too small for any boat, as you well know. Getting rid of that drain fitting and the extra elbow at the outlet would be the first things to try.

But I am at a loss to know what to do. A straight down drain fitting would leave standing water in a loop of hose ... bad.

Can you simply cut a hole aft of the drain that leads directly from the deck to the transom pocket?

Some galley drains like that have a rubber flapper to prevent backflow. Rip that out.

Do you have one on each side?  That is a galley drain fitting I put the same one in our shower basin.  If there are two I would imagine they were originally Cris crossed.  I would put a thru deck fitting to a sweep 90 then run to the opposing side if there are indeed 2.  If you are worried about water coming back if you could put in a swing check in the horizontal run.  If there is only one probably put another hole in the back around the opposite courner and the same approach as above make a large radius with bigger hose,3/4 spiral wound, to the sweep 90.

I don't see a problem doing what you propose, install a straight piece of pipe ( same dia as inside of box) at an angle. This will by far give the best drainage.

Unfortunately I can't cut a drain hole any further aft, you can just about make out that its the aft end of the cockpit.
No need to worry about water coming back in in, its well above the waterline.

I'll go with that then longy, my main worry was flex between the deck &amp; the hull, but realistically people have rudder tubes that run the full height of the boat and they're okay.
Its almost like the designer planned a proper arrangement and the year decided that it would much cheaper just to use some fittings from Caravan Supplies instead.

How is access to that area? Lots of fiddly glass work to get tubes secured in place. How much lower than the 'boxes' is the actual waterline?

Access I would describe as 'not great, but not impossible'.

Boxes are well above the waterline. 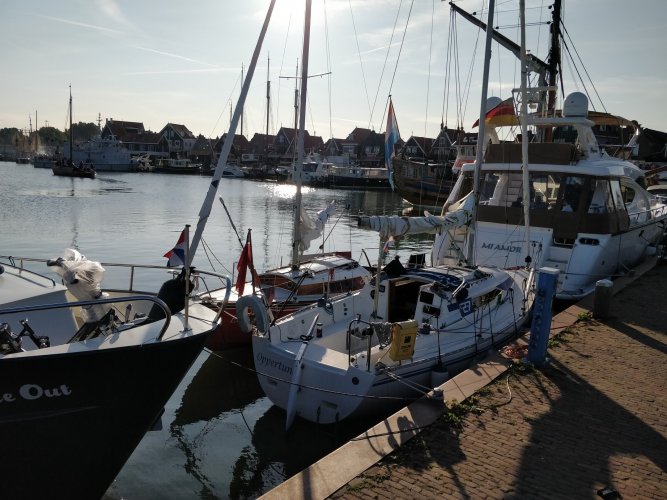 After having a poke around today, I think a better idea maybe to fill the existing drains &amp; glass the new ones into the aft face of the cockpit, there's just enough space between the back of the cockpit and the transom to do it, and they should work better, however doing it neatly will be the trick. 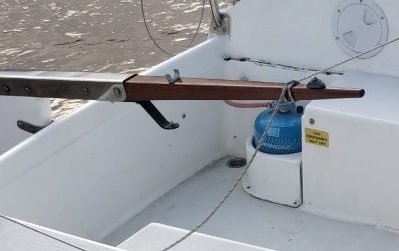 Super high res I know, so it would go just aft of the current drain at the back face of the cockpit.

P.s. I didn't spell the name incorrectly, she came this way but its just too much hassle to correct for the sake of one letter.

Getting more drop in the tubing will help drainage a lot, accelerates the flow. Consider two thru hulls just above the waterline.(could be out the hull under the stern flare also). Issue with going straight out the back face of the cockpit is you will be above the floor level, unless you do a lot of work &amp; get the bottom of the drain tube below the cockpit floor. I think I would stay with the original idea, &amp; put 2" tubing into the boxes.

Cut a hole in transom and inside cockpit wall. Glue in PVC tube and glass all around it.

If the tubes are not lower than the cockpit floor, it will always have standing water. Can be done, but it requires quite a bit of work to retro fit. If you want to increase drainage, and current drains get floor dry, then it's a great method.

Cheers for the ideas, appreciated as always.
I'd rather avoid extra cut outs in the transom or bottom of the hull if possible, the existing boxes are big enough to move plenty of water, its just getting it into them.

There 'should' (i'll check today) be enough room to follow Zonkers suggestion, but angle the tube downhill so that it goes into the top of the existing drain box. Possibly notch the tube so it sits across the bottom and aft end of the cockpit, which would allow the drop as longy says.

If I had the balls (and skills) of Alcatraz I'd just cut the back off cockpit &amp; call it done haha.

Any reason you can just glass a channel connecting them both? Make up a prefab fibreglass channel at home and glue it on to the underside of the cockpit?

By the the best cockpit drain ever invented is.... the open transom! Also easier access on and off the boat or getting onboard after a swim! Do it! you will never look back!

Is it at all recommended to put a check valve or backwater valve on your cockpit drains?

My drains are ~20" above waterline when level but at a ~22deg heel the leeward drain is right around water level and I've got a couple soakers driving from the leeward side. I don't think I'm going to have the boat long enough to warrant the fiberglass work to direct the drains out of the transom.

climenuts said:
Is it at all recommended to put a check valve or backwater valve on your cockpit drains?

My drains are ~20" above waterline when level but at a ~22deg heel the leeward drain is right around water level and I've got a couple soakers driving from the leeward side. I don't think I'm going to have the boat long enough to warrant the fiberglass work to direct the drains out of the transom.
Click to expand...

Criss crossing them might help, pretty common arrangement for exactly the issue you are having.  Check valves are frowned up due to the likely hood of sticking due to lack of service or getting fouled with "stuff". Same reason for them not being accepted as best engineering practice on a bilge pump discharge.  Something exiting the stern where heal wouldn't effect a swing check or a flapper on the thru hull similar to a exhaust exit would probably be ok for me as I would regularly clean and inspect.  Coming out the side would be no as the heal would have it open most of the time anyway.  Any kind of a spring check would be a no go as they would foul constantly and are not full flow.

Thanks @Sassafrass I'll try criss crossing when I have some time!

Aft end of the cockpit &amp; the step / cut out / drain thing in relation to it.
So it looks like there's plenty of room to put some much bigger drain in place, possibly from the back end of the cockpit, as it stands all the water pools at the very aft end so it should be effective.

I'm not so worried about being able to glass it in (although sanding of that gelcoat won't be fun), more about making it look tidy in the cockpit and not bodged in, I'd rather use polyester so I can finish the cockpit side with gelcoat to match the rest.

I would suggest to extend the channel and glass it to the existing hole (after taking off the tube of course). If that does not do the trick you can always make the drain hole bigger.

Which Dutch village is that? Must be on the IJsselmeer / Markermeer. Volendam?