The all time topic is free again!!!

Gouvernail said:
The all time topic is free again!!!
Click to expand...

There goes the next month rereading this classic. It contains the  early works of Mikey when he first showed up.

FUCK I LOVE THIS PLACE!!!

Near the end the cruise, I decided much of the banter in which I had been involved was not appropriate for long term saving. I deleted my posts from the thread.

However, if memory serves correctly, the thread still had over 100,000 posts.
In a brief look last night I failed  to find many pictures, doctored hilarious pictures, and memorable comments from posters who seem to be entirely absent from the thread.

My  second curiosity has to do with the title. Originally  Motorcycle’s thread  has no mention of  1000 Days Cruising..

the title was something like “This is  Ridiculous” and I think the 2000 pounds of cheese was mentioned.


Can anybody do some explaining??

This is coming around again??  Save us.

We had way too much fun scoffing Reid, he just wasn't one of us, "NOKD", and much of his sailing and seamanship was gag-worthy.

Yet--he actually did circumnavigate the world, albeit at a scorching 3 knots.  I never thought he, or his schooner, would make it.  But he did.

Is he scamming now?  Maybe.  But I don't think our mass-mocking of him was SA's finest hour.

(See the paragraph about SA mid-article)

Note: the formatting control in this thread is wacko and can't be corrected, so the font sizes and column widths jump around.


He Made the Longest Ocean Voyage in History, and Turned It Into Art

Reid Stowe once hung out with Jean-Michel Basquiat and Keith Haring. But the sea was his true passion. 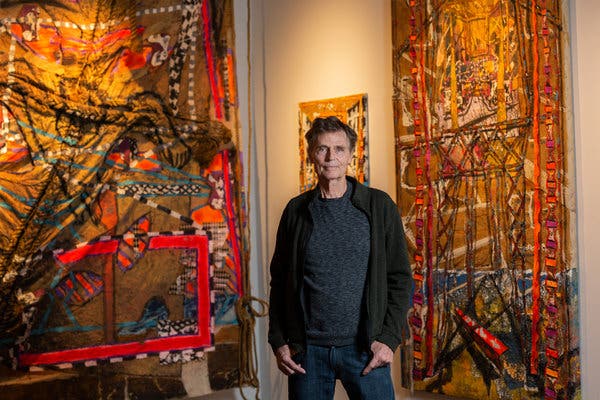 Reid Stowe with his works made from the sails used during his 1,152-day voyage.Credit...Roshni Khatri for The New York Times


Along a Hudson River pier in 2010, a sailor docked his battered schooner as a crowd watched in quiet anticipation. When he wearily stepped onto land, he had finished a remarkable human journey: Reid Stowe had been at sea for 1,152 days, the longest nonstop ocean voyage in recorded history.


A decade later, Mr. Stowe is raising a family in suburban North Carolina and driving a 2005 Chevy Malibu. But he has also obsessively been making giant abstract paintings, most of them using the weather-beaten sails that carried his schooner across the globe. He was recently back in New York to visit the Chelsea gallery that is showing his art.

“All this time later, I’m still trying to tell the world the story of what I went through,” said Mr. Stowe, 67, during his recent stay in Manhattan. “I’ve departed the touch of earth longer than anyone else. All my paintings carry the vibrations and significance of that journey.”

Tall and blue-eyed, Mr. Stowe has chased adventure his whole life. He crossed the Atlantic twice on a tiny catamaran when he was 21; he sailed through icebergs in Antarctica; he was kidnapped by pirates on the Amazon River. 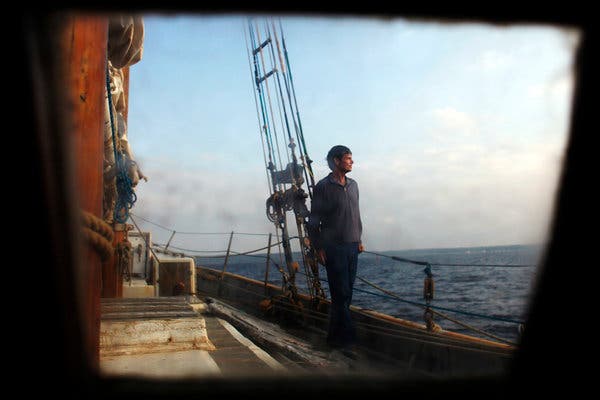 Mr. Stowe on his schooner the day before he arrived in New York to end his travels.Credit...Beatrice de Gea for The New York Times


Mr. Stowe was in a couple of small group shows in the East Village, but he was always returning to the sea. He hopes this show, at the Paul Calendrillo Gallery, might be his second chance at the art world.

“I was painting on giant canvases before Schnabel was,” he said. “Warhol’s dealer told me I could be big, but he’d say, ‘Well, Reid’s going off on another trip again.’” 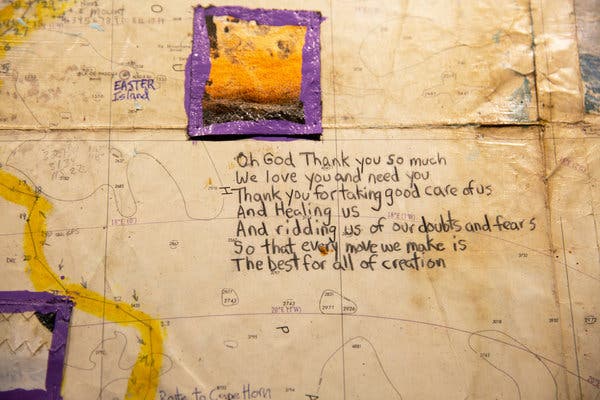 Mr. Stowe’s art is covered with objects from his trip: weather charts, topological maps, signal flags, boat cleats, and drawings he made at sea.Credit...Roshni Khatri for The New York Times


Mr. Stowe became obsessed with embarking on a thousand-day journey at sea in the 1970s. His intention was to simulate a round-trip to Mars, and he spent years preparing for it.

His father was an Air Force lieutenant colonel, and he grew up on military bases around the world, but he seemed to show little interest in regimentation after that.

As a young man, he visited the South Pacific and he later carved the figureheads of Polynesian spirits into his 70-foot schooner for protection. (His ship, which he built himself, is named Anne, for his mother.) He studied Taoist philosophy, and he claims that energy harnessed from tantric sex has powered his long distance voyages.

In St. Barts, he was a pot smuggler (he spent nine months in jail), and in the 1990s he lived rent-free on a boat moored to a dock in Chelsea. His three marriages to young women — two artists and a model — all ended in divorce because they wouldn’t commit, he said, to the 1,000-day trip.


Soanya Ahmad was different. She was a 23-year-old photography student when she met Mr. Stowe, who was then 55, and one of the first things he asked her was: “How’s your health? Can you spend a long time at sea? It’s important I know.”


In 2007, they departed from Hoboken on a boat stocked with six tons of nonperishable provisions and a sprout garden. On Day 15, a freighter hit their schooner. Around Day 300, Ms. Ahmad started feeling sick, and a boat picked her up near the coast of Australia. Communicating by a satellite phone, Mr. Stowe soon learned that she was pregnant. On Day 457, Soanya gave birth to Darshen in New York. Mr. Stowe met his son for the first time when he arrived on the Hudson two years later.

Since returning to land, Mr. Stowe has embraced something close to domesticity. He now lives in the suburbs of Greensboro, N.C., at his father’s house with Darshen, who is now 11, and Soanya.

He mows the lawn, and he likes watching thrillers on television. He takes care of his father, who has Alzheimer’s. Mr. Stowe said they all get by modestly on his father’s retirement funds and from his painting sales. Soanya home-schools Darshen, and Mr. Stowe hopes to take his son sailing this winter to Haiti. “He was braver when he was younger,” Mr. Stowe said. “He used to laugh at storms. Now he doesn’t like mud. He likes playing a computer game called Fortnite.” Mr. Stowe’s schooner is moored on the North Carolina coast, and requires serious repairs. 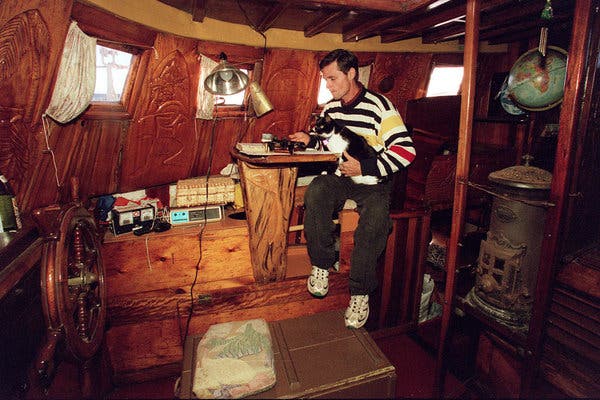 Mr. Stowe, at sea in 2000, on the schooner Anne, which he built.Credit...Marilynn K. Yee/The New York Times

[SIZE=1.25rem]Mr. Stowe still thinks about his trip constantly, but he doesn’t miss the spotlight.[/SIZE]


As his voyage gained international coverage, he became the subject of derision in a corner of the sailing community. The users of a website called Sailing Anarchy, which caters to regatta racers and yacht owners, started mocking Mr. Stowe as a narcissistic hippie with a knack for self-promotion. Still, they followed Mr. Stowe’s trip obsessively, and one message board reached over 30,000 comments.

“I guess Stowe is still bobbing around, people continue to give him enough stuff to get by and he manages to lure in another young thing,” read a typically caustic comment. After Ms. Ahmad became pregnant, their scorn intensified. One commenter tracked down Mr. Stowe’s federal conviction for pot smuggling, and he also posted a report that Mr. Stowe once owed more than $11,000 in child support to the mother of his daughter from his first marriage. (Mr. Stowe insists he wasn’t behind on payments).

When the trip ended, the trolls faded away, but Mr. Stowe said he lost valuable sponsorship opportunities as a result. Since then, he’s also been trying to publish a memoir.

“They wanted to paint me as this guy who took a young woman to sea, got her pregnant, and abandoned her,” said Mr. Stowe. “The truth is I did something no one else had ever done, and I got to go do it with a beautiful girl, and they didn’t like that. They all wanted to be me, but they were stuck behind their computers.”

While Mr. Stowe made the trip to New York for the gallery opening, Ms. Ahmad, who is now 36, remained in North Carolina to take care of Mr. Stowe’s father. “People judged Reid for not being with me, but I supported him being out there,” she said over the phone. “He needed to get that trip out of his system so he could come back. All this judgment came down on us, but we’re all still together, and there’s nothing anyone can say about that.”
[SIZE=1.25rem]She said that suburban life has been an adjustment for him. “He’s had to get used to living in a house,” she said. “It’s difficult sometimes for us to relate to neighbors. They Google us and conversations can be awkward.”[/SIZE]

But soon after settling down, Mr. Stowe felt compelled to start painting seriously. Every day, he works in a studio in his backyard and the giant sail canvases he paints on hang from trees with pulley systems. “When a storm comes through, I hear the sails flap and it makes me feel alive,” said Mr. Stowe. “When people see my art, I want them to feel the trip. I want them to walk into the unknown.” 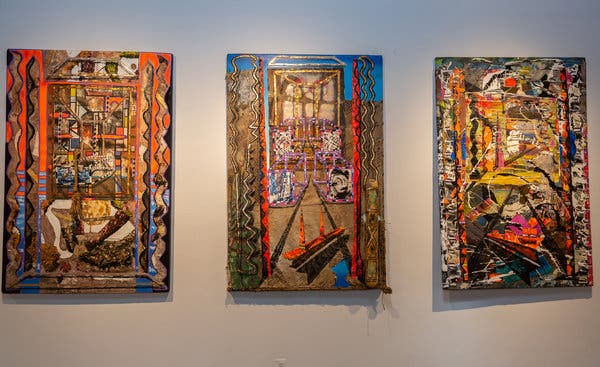 Pieces in “Art Transformations From the Longest Sea Voyage in History.”Credit...Roshni Khatri for The New York Times


[SIZE=1.25rem]At his gallery show in Chelsea the other day, Mr. Stowe reminisced about his days in the downtown New York scene. He was living in a loft on Broome Street, he partied with Keith Haring at Danceteria, and he got written up in a Japanese art magazine.[/SIZE][SIZE=1.25rem] [/SIZE][SIZE=1.25rem]And then there was the Jean-Michel Basquiat portrait session in 1985.[/SIZE]


Mr. Stowe was in St. Barts on his boat, he recalled, and Basquiat joined him while he was there on vacation.

“He visited me and I showed him my studio. He asked, ‘Can I paint, too?’ I gave him some prime white plywood and he painted me standing there. You know how he leaves eyes blank? He told me we were looking at each other through those eyes.”

Mr. Stowe doesn’t regret selling his Basquiat. “I needed to cut my ties to the earth,” he said. “I had to sell my Basquiat because I wanted to merge my spirit with something as high as God.”

“Art Transformations From the Longest Sea Voyage in History,” is on display at the Paul Calendrillo Gallery, at 548 West 28th Street, until Oct. 31.

at some point newbies needed help getting up to speed.

Apparently we collectively ruined the grift for this voyage.

kent_island_sailor said:
Apparently we collectively ruined the grift for this voyage.
Click to expand...

It's the little things.

This really goes well with the new format

Assuming you could obtain a photo of each laser ever built, If you were to attach seven photos of individual Lasers to each post in this thread, you would have almost enough left over photos to add an eighth
That is a lot of sailboats.

It seems this old thread is sailing off into the sunset