Only 996 days left of sea sickness

4 more days than bullimore though

A land not fit for man nor beast.

it took my mom 22 years to get rid of me, even then she had to chage the locks while I was away, creeping out the MILFs with their kids at the park. h34r:

jesposito said:
Sailman,why don't you and Lisa follow suit on the West Indies 36. 1000 days would do you good!
Click to expand...

Why don't you give it a try first with Denise on the J29 and let me know how it goes. See you in three years!

Last night we had a collision with a freighter vessel. No one was hurt and the boat is fine except the bowsprit is bent and now useless and we don't have a roller-furling unit or jib sheet. We are engaged in emergency repairs and more will follow soon.

that's one of those"what the fuck just happened"moments. I Hope he realizes now that it's not the water that'll kill ya, but all the hard shit in and around it that will do him in.............

Doesn't this sound like a scene from "The Postman Always Rings Twice"?

“The sun reflected off the ocean behind so strongly that I could scarcely gaze upon the white shimmering liquid. It was a raucous ride on the cockpit table. I gripped the edge so I wouldn't go sliding off in a hurry. I had just washed my hair, but I gladly allowed it to become salt encrusted yet again. The roaring wind, the white-topped crashing sapphire and the almost steady rainbow portside made me feel exuberant and I grinned ear to ear.”
Click to expand...

"Reid decided to work on patching the sail that he accidentally tore while putting a reef (tying the sail shorter) in during one of the previous storms. He figured since he had to patch the sail, he might as well do it Reid style and cut the shape of the patch into a heart, this being the theme for the first quarter of the 1000 days voyage."

After 700 days with that nutjob the theme of the last 1/4 will probably be a blunt object to beat him senseless with.

Mid-ocean with no headstay? maybe they'll fashion a new one out of bean sprouts?

NoStrings said:
Doesn't this sound like a scene from "The Postman Always Rings Twice"?
Click to expand...

I remember that scene!

This is probably all BS. Sounds like he is setting up the "we wanted to go on but equipment failures made us stop" excuse.

Does anyone really believe that he hit a freighter or that a freighter hit him or that he is recutting a sail into as heart shape?

I listened to his telephone call shoreside (posted on the 1000 day web site), and he comes across as a child, or aesthetic, or completely unfamiliar with the ocean that he is attempting to cope with, and not at all quantitative. His description of the sea conditions - there are white caps across the sea - is completely unlike the description a typical sailor would provide: it's blowing 14 knots and seas are four feet.

I suspect that attempting to have a conversation with him would drive me up the wall. Good thing that won't happen.

On the plus side, he did manage to put the project together. On the down side, he seems woefully unprepared, and his choice of crew leaves much to be desired. His comments reminds me of a hiker being surprised when a bear turns out to not be as friendly as you wish it to be.

He stated it was a Maersk line freighter, it was 2 am when the bowsprit was 'bent', and that he was in the pilot house keeping a look out, as was the Maersk ship. Neither saw other, both were running navigation lights - fat lot of help that will do mid-ocean on a sailboat, the container ships are looking right over your mast.

It does appear that the Darwin awards may have some new candidates shortly...

Alternatively, the bowsprit failed on its own and he's creating the illusion of a collision in order to provide a reason not to go on. Shades of Donald Crowhurst.

not sure if photo is attached or not. don't know whether to hope for soanya's sake that he is tethered on or not. 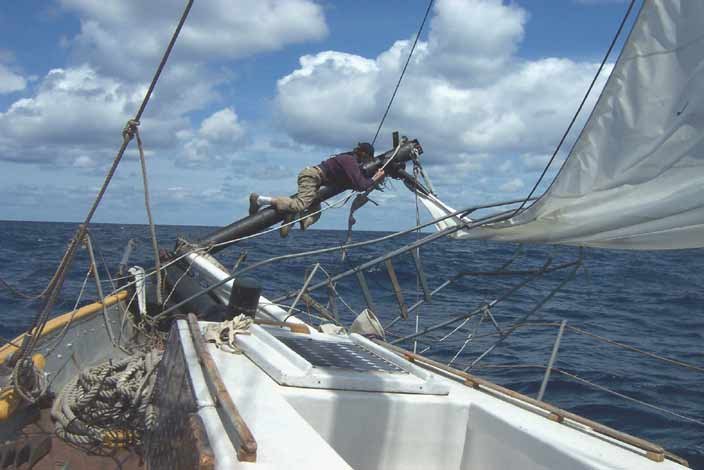 SamLowry said:
Hmm. This guy sounds to me like the perfect anarchist. But then he gets slammed by posters on a website named Sailing Anarchy.
I guess anarchy has limits...
Click to expand...

We prefer a more structured anarchy, if that's ok with you.

not sure if photo is attached or not. don't know whether to hope for soanya's sake that he is tethered on or not.bowsprit repair: http://1000days.net/home/

Well, he definitely ran into something. To his credit, he hasn't hit the button on his EPIRB yet like that douchebag off of Chile. I'm thinking that he needs a welder. My date of June 6 may be optimistic. I'm guessing Horta will be their landfall.

Hey, does anyone want to go out and bash around SF Bay tomorrow afternoon and draw heart shaped designs on the GPS?

cicindela_tiger said:
His comments reminds me of a hiker being surprised when a bear turns out to not be as friendly as you wish it to be.
Click to expand...

And BINGO was his name-o.

A spaced-out crunchy who really believes that All You Need is Love.

wherever there is water. and beer.

holy shit he really did hit something

Florida, Downeast ME, and Newport, RI

If he was keeping watch, why wasn't his radar on? The ship may not have seen him, but he should as fucking hell have seen her. Reading this guy's bio, he allegedly has a lot of sea mile, so I'm really confused now.

Does this guy have insurance for this adventure?

Worth listening to.."We had all our running lights on, as did we, but we just didn't see each other. We'd only seen one other boat and that was last evening." Somebody was sleeeeeepppppppyyyyyyy....Dumfuck.