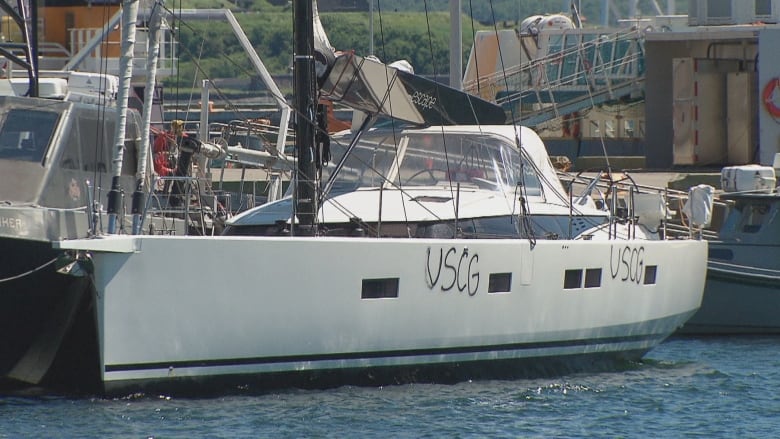 The couple's sailing yacht, Escape, docked in Dartmouth Cove. The U.S. Coast Guard spray-painted USCG on the yacht before leaving it adrift to alert other vessels that passengers had already been rescued. (Mark Crosby/ CBC)

A sailing yacht has been towed to Dartmouth Cove in Nova Scotia after its German owners were killed last month in an accident at sea.

Karl and Annemarie Frank lived on their CNB 66 yacht, Escape, and blogged about their sailing experiences.

Last month, the couple picked up two American passengers somewhere in the Caribbean. Around June 9, they left Bermuda and headed for Nova Scotia.

On the morning of June 12, they ran into a bad storm off the coast of Massachusetts, said Lt.-Cmdr. Mason Wilcox of the U.S. Coast Guard. 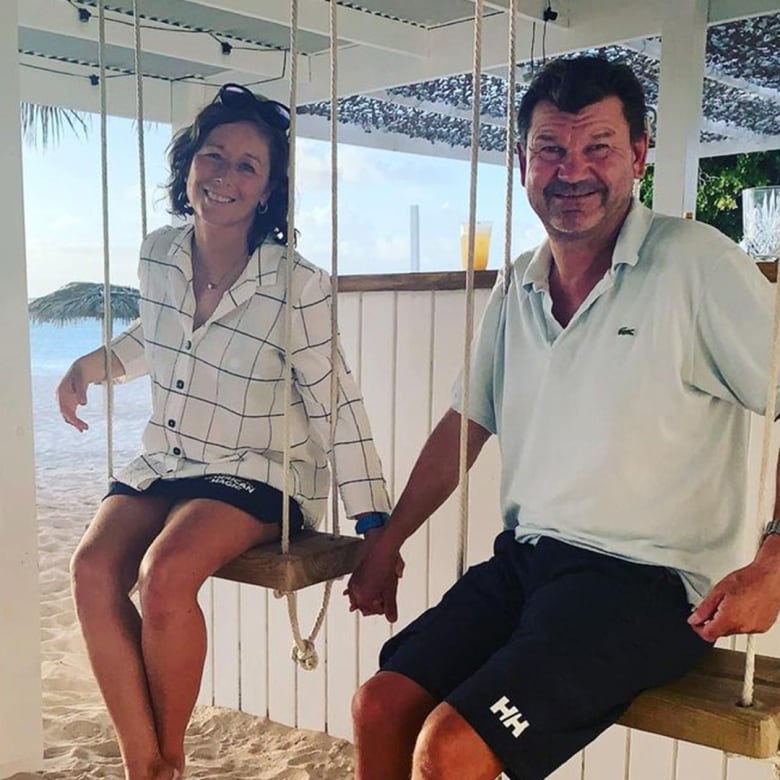 "Because of those injuries, the two passengers … hit the emergency beacon on board to say, 'We need help.'"

The coast guard answered the call, and the German couple were taken to Massachusetts where they were pronounced dead.

The coast guard returned later that day to rescue the two American passengers who remained on board Escape, which was left adrift. 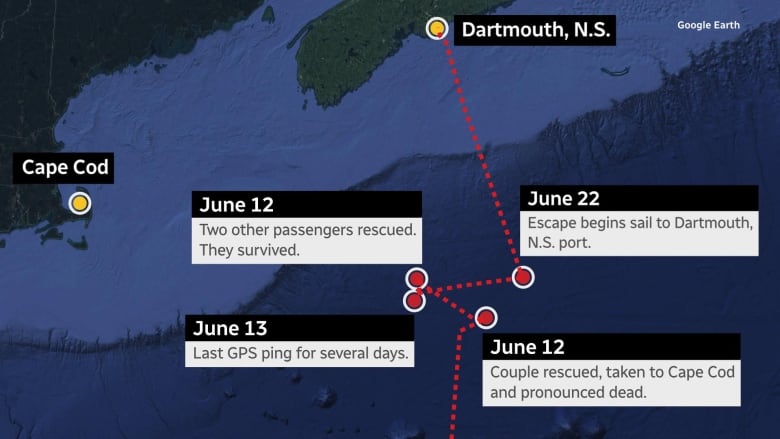 GPS tracking from the Franks' blog shows the approximate path of their yacht. (CBC News)

"We did not tow the sailboat back because we wanted to get them back to shore as quickly as possible. And unfortunately, towing a sailboat that far could probably cause more damage if we went fast," said Wilcox.

Philip Wash, an experienced sailor from Halifax, was hired by Leeway Marine in Dartmouth to retrieve the yacht.

He and a crew left from Pubnico a couple of weeks ago on a lobster fishing vessel. They spent days searching the Atlantic Ocean for Escape and finally found it in the middle of the night.

"We put all kinds of lights on it, and there it was, just sitting there, flopping back and forth," Wash said. 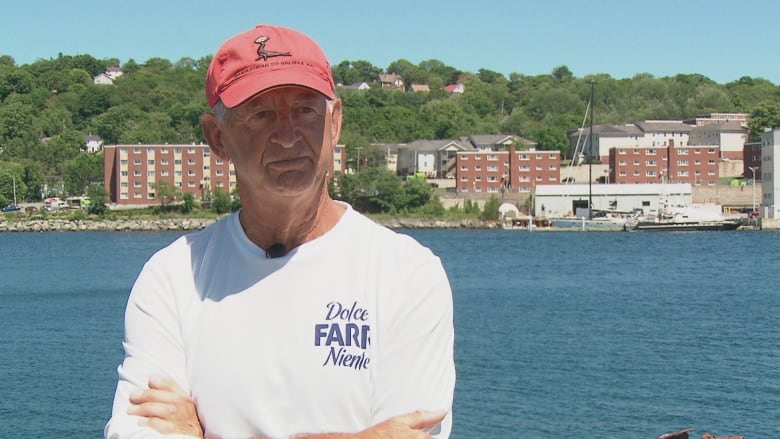 Philip Wash from Halifax was hired to retrieve the couple's yacht from the Atlantic Ocean. (Mark Crosby/ CBC)

Before disturbing anything on board, Wash and his crew took pictures of the scene for the German insurance company and investigators.

It's unclear how long the yacht will remain at Dartmouth Cove.

The German investigation into the accident, with the help of the U.S. Coast Guard, is ongoing. What kind of rigging failure, and how did it result in two deaths? Unimportant details, but still…
N

That portion of mast that we see, stays, furled double-jibs, looks like all is intact. Boom, llooks intact, who knows, but no obvious topping lift. Injured how, then? Jibe? Topping lift parted? Carbon monoxide from somewhere?

Don't mind me, ages ago I was a Coast Guard investigating officer, it ruins you for life, you have to try to figure it out....

Looks like the main is no longer rolled onto the roller reefing system.
N

From the vague description:


What then, boom swinging freely in a seaway hit her head, he rushes in to get her, gets bonked also??

Possibly main traveler busted off and was flying about

Modern 66ft rig is dealing with some scary forces.

My initial thought specifically was some malfunction with an electric winch or similar. Could be anything of course.

Note photo of boat docked is after a pro skipper sailed her back.

Better picture of the boat pre recovery.. Looks like a few tears just below the head.

Furling system gone wrong? Looks like the hydro for the vang failed at the least.. Boom on the dodger in first shot. It would be interesting to hear from the recovery skipper about how they went about locating the boat, search pattern, the whole tale.

trout said:
What kind of rigging failure, and how did it result in two deaths? Unimportant details..
Click to expand...

This scuttlebutt post suggests that they lost the mainsheet & that the boom is what caused the injuries. I'm not sure where they got those details.


He forgot the purple sarcasm font...
.

oops.. I read that as respect for the dead. indeed. rip. but agree, some info for the as living seems important.
Last edited: Jul 7, 2022
N

Well Scuttlebutt has a more specific description than we had otherwise. Something in mainsheet attachments or blocks, or possibly the mainsheet itself parted? Or a traveller tore out or failed, Looks like a solid vang, so the boom is going to swing wildly in high seas if no effective sheet anymore, and nothing else aft of the shrouds to stop it.

Easy to be a smart guy at a desk ("When there's a casualty at sea, there are many wise men on shore") ...

I'd like to see what the Coast Guard rescue crew saw about the rig, since they spray-painted the topsides for I.D.,they likely boarded.

Sorry about the whole thing, hope the two survivors aren't blaming themselves if it couldn't have been helped.

Wasn't there an incident a couple of years ago where a large sailing yacht lost its mainsheet and the boom ended up killing two crew before they managed to get it under control?

Seeing the boom resting on the dodger might indicate something similar here....

Lots of people are now sailing around on big boats with electric and/or hydraulic winches etc., making them easy to handle short handed. But people tend to overlook that when the technology fails, these large rigs carry considerable, even lethal forces that are not easily dealt with with a small crew.

Sad story. Am I the only one that is considering foul play? Odds that it was two people killed by some mysterious malfunction seem like the less likely scenario.

alphafb552 said:
... these large rigs carry considerable, even lethal forces that are not easily dealt with with a small crew.
Click to expand...

Not limited to large rigs. A J/35 boom can kill you just as dead as the boom on a 65-foot boat.

Somebody Else said:
Not limited to large rigs. A J/35 boom can kill you just as dead as the boom on a 65-foot boat.
Click to expand...

True, but conditions need to be a lot more extreme