My Islander 36 has a beam of over 11'. This makes the salon area huge, like a dance floor when the table is folded up. Great at rest, but not what you really want in a seaway. I'm thinking to clutter it up a bit, maybe...

I started looking for layout ideas other than the typical "settee facing settee, with table (folding or otherwise) between".
Of course there are the "settee and facing dinette (perhaps U-shaped)", and the "settee and facing 2 fixed chairs" variations on the above. We've all seen these, but that seems to be about it.

Is there anything really different out there, different *and* functional, other than the typical layouts? I'm not seeing much, if so.
Figured if it is being/has been done, someone here will know of it, and hell - it might be interesting. TIA

I suppose that if you have enough beam, you could make a fixed "island" of furniture in the middle.  Some of the newer wide-body floating condos seem to have such features. E.g. with the facing settee moved to the center line.

But I started writing out a confessional:  I've got less beam and displacement to play with than you, yet one thing that drew me to this old Ericson 29 in the first place was the comparatively spacious and open layout.  And its decrepit state such that any atrocities modifications that I inflicted upon it would be no great loss.  And I've been busy with some of those over the last few months.  None of these are really a "new" idea, but they are "different" in a Frankensteinian sort of way.  Maybe examples that make the two-facing-settees boat more functional.  For me.  Maybe not for anybody else.  So one principal was that any modification had to be "bolt on."  That is, it could be unscrewed and removed, to restore the boat to original condition.  (Or I had to really, really want it.) Someone with better than junior-high shop skills might even be able to do that and make it look good, too. But I only have to please myself.

Long story short: I nibbled away at excess bunk, table, and "dancing" space to make work surfaces and storage cabinets.  Does a 30-foot boat really need to "sleep six?"  Tried not to add too much weight, and tried to distribute what I did add. Oh, also the settee structure doubles as the stringers, so significantly chopping it up was off the table.

Good grief!  Here it is June already and I'm still fiddling around with trim work when I should have finished rigging and launching by now!

The boat had a couple of quirks to start with.  One being a short hanging locker in front of the foot of the port settee with a tiny useless "chart table" on top.  I bridged across the settee to make a nice 40-inch-wide standing-height chart table against the forward bulkhead and moved the electrical panels and gadgets up there to create a nav station.  This created a couple of deep lockers where the foot of the bunk was previously.  This was actually done several years ago, so now I need to update the cabinetry to match the more successful (?) and lighter style that I've come around to since then.  This is a pretty obvious project for the design, because of that weird hanging locker and other owners have done similar things.  But other boats might be amenable to something similar, even if they don't have that locker to begin with.   Maybe not a chart table, but it could be a workbench or a pipe-organ or whatever.

Previous owners chopped out the drawers in the galley to add a gimbaled propane stove.  Which at first I thought was a good thing.  But it severely impacted the functionality of the galley.  So I nibbled away at the other end of the port settee to make a galley extension with drawers and pot lockers and a dedicated trash bin.  This created a tiny U-shaped galley, with a lot more work area.  I thought I came up with this on my own, but then I found out that Bruce King did something almost identical on the Ericson 31, which is a very similar hull with the ends stretched out a bit.  (The other possibility was to make an "L" across the companionway, chopping up the quarterberth instead of the settee.)  Now the port settee is more of a "love seat." On a bigger boat, (or if one ripped out the chart table and hanging locker) I suppose it would become a "dinette."

The last "large" project was a dedicated workbench.  This is something that seems to me to be lacking from most boats.  Some place to spread out a repair project or a hobby without disrupting the rest of the boat.  After thinking about it for a long time, I nibbled away a seldom-used corner of the V-berth, and the empty space in the flare of the hull above it, to make a five-foot long workbench that takes a surprisingly small chunk out of the usable sleeping area.

Other smaller projects included ditching the large awkward folding table in favor of a smaller one that pivots over the settee.  It is much, much handier, 99% of the time and can be used in several different configurations.  Adding bypass doors to the open cubbies. Adding cabinets and shelving above the settee.  Thinking of adding a little bench or stool just aft of the compression post, to brace against when the boat is heeled over.

I could add some photos, but it's kind of a construction zone in there now, and everything not involved in the project was stripped prior to hauling the boat, to save weight.

Couple of crime-scene "in-progress" pics.  May be less mockable in a few weeks.  Maybe not. 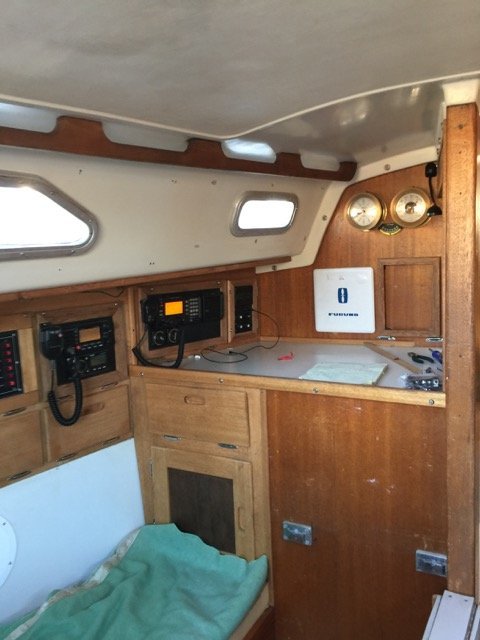 Galley Extension (Not hauling the gimbaled stove up the ladder just for a photo op): 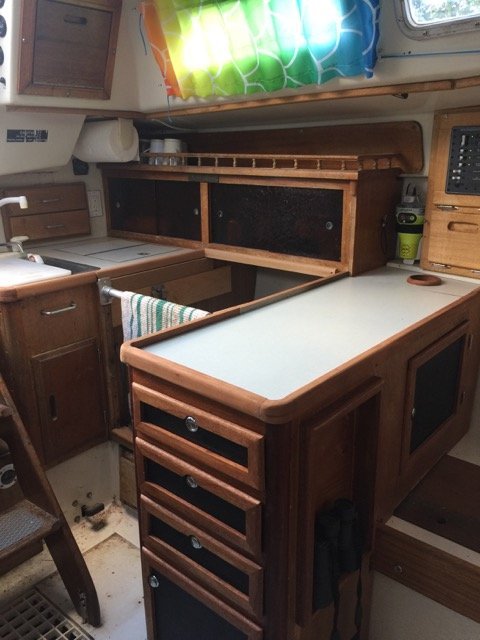 Work bench (Haven't yet re-cut the mattress foam. May sew up custom tool rolls to hang on the wall above the bench.): 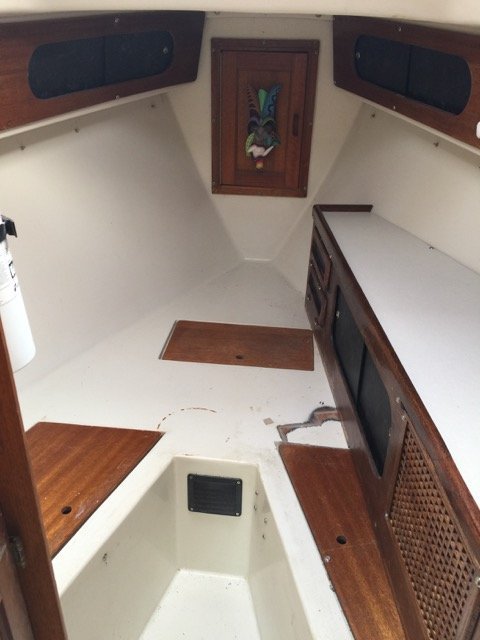 Need to reconcile the clashing styles over the next year or so. But I want to sail for a bit now.

Niagara 35 and Lancer 36 both have different layouts.  Basically galley and head in the middle of the boat.

Instead of cluttering up your open space for the sake of something to hold onto, why not install a long grab rail on the overhead, running fore to aft?

trying to find it on google earth

Just for fun look up a Garcia Passoa 47.

The centreboard forces the salon settees to one side and walkthru/galley/nav to the other. I’ve always thought the layout would make for a good sea berth. (I don’t honestly think this is an option w 11 ft beam...)

Other than that, rip your engine out and replace with a waterbed.

This may not have any bearing on what you're contemplating but an unusual (to me at least) layout I came across was on a Sarabande 41, a French boat from the '80s. The dinette was aft under the cockpit (with the engine under the table), the galley was to port and nav to starboard amidships, and then there was a step down as you went forward to two cabins and the head. I've probably spent more time than would be considered reasonable pondering the pros and cons of it, but having never sailed/lived with it I can't really say how well it works in usage. It did make for a pretty tall/steep companionway ladder, and of course all the cockpit storage had to be all the way aft.

A nice shiny stripper pole right in the middle would give you something to hang onto in a seaway and provide entertainment at anchor.

The NY 36 had a very good layout for racing or a couple - not so good for other combinations of crew because it reduces privacy.

I've seen it used from 31' to 36' and I thought it was a much better use of space than the more "normal" layouts. It puts headroom where it's needed while still allowing a fairly small cabin top for maximum deck space.

Oh, there are those “Offshore 41” ketches with the weird circular settee.  That you crawl over to go forward?  Haven’t seen one in person but the pics look like something from a Matt Helm movie.

The C&amp;C Landfall 35 came with two interior options. There are some who love the second one.

toddster said:
Oh, there are those “Offshore 41” ketches with the weird circular settee.  That you crawl over to go forward?  Haven’t seen one in person but the pics look like something from a Matt Helm movie.
Click to expand...

How about the Niagra 35 original interior

Blitz said:
A nice shiny stripper pole right in the middle would give you something to hang onto in a seaway and provide entertainment at anchor.
Click to expand...

^^^ I did this with some 1" stainless tubing and fittings to create an "H" that attached to the cabin sole and ceiling with quick release fittings: 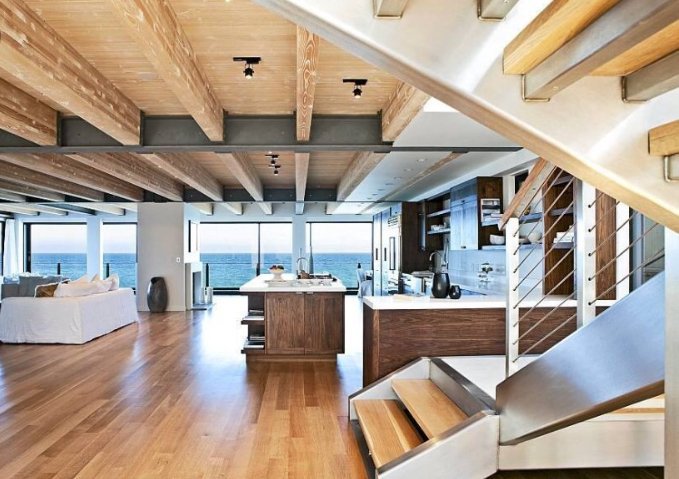 The I-36 is a nice dockominium with all that open space.

A centerline table with fold-down leaves and floor to ceiling mounts is a pretty standard arrangement, and probably easy to fit.  You could make it removable.

The Niagara/Landfall type interior is appealing for a lot of reasons, but to me it just clutters up the most spacious part of the boat, and makes the whole thing feel chopped up and smaller.  I do like this arrangement on the Nonsuch catboats, which are wider both forward and aft.

Can anyone recommend a good book on building yacht interiors?  I'm not interested in redesigns, just carpentry details for repairs and minor mods. 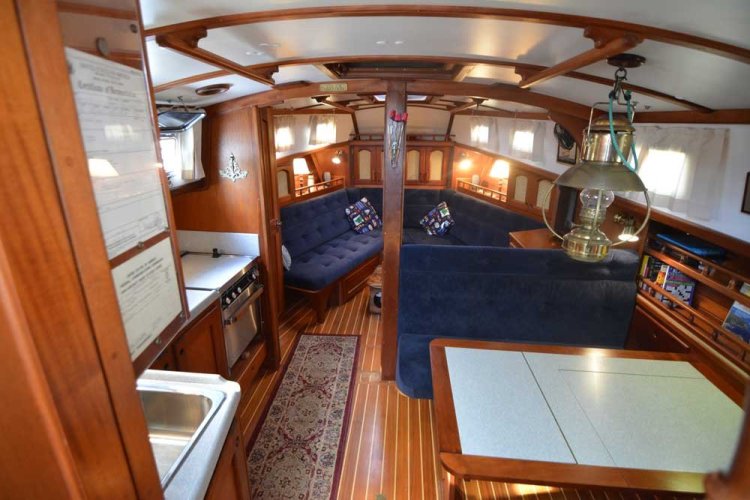 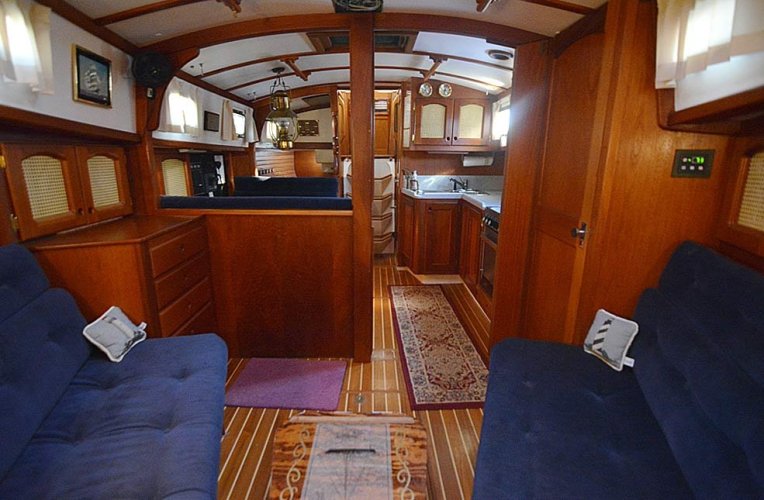 blurocketsmate said:
Can anyone recommend a good book on building yacht interiors?  I'm not interested in redesigns, just carpentry details for repairs and minor mods.
Click to expand...

These two are now classics but provide lots of useful info. 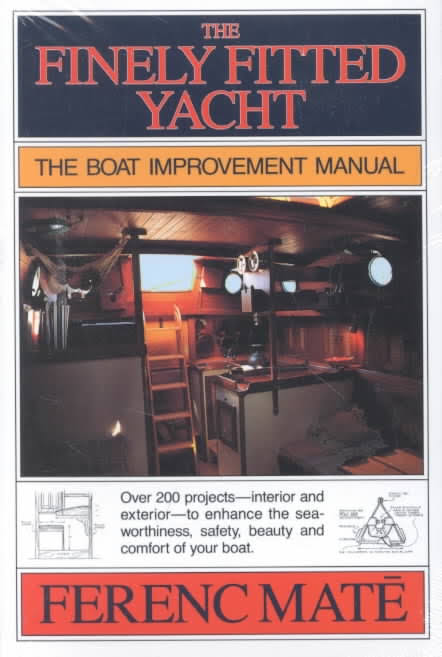