Eight bells for Lee Chesneau, master meteorologist who taught many a sailor over the years.  I’m a bit sad that I missed being able to attend one of his many weather seminars over the years, to get an insight into his vast experience.  Not sure if this made the (supposed) front page here.  (Doubtful)


Something he was known/will be remembered for (and an article of which he was a co-author):  https://www.vos.noaa.gov/MWL/dec_08/milibar_chart.shtml

“Born in New York City in July 1948, the son of Archie and Dorothy, he moved with his family to South Florida at a young age and attended Coral Gables High School. Swimming was one of his greatest passions, from his time as a youth in Venetian Pool, to becoming a two time All-American his junior and senior year. Competing internationally at events like Maccabiah Games with teammate and Olympic Gold medalist Mark Spitz, he then accepted an athletic scholarship at the University of South Carolina, he transferred to the University of Wisconsin, obtaining his bachelors in Meteorology, where he competed in the Olympic Trials and continued his post collegiate swimming career in the US Masters well into his 40s

When Lee was young, he vividly remembered being excited at the prospect of weather phenomenon, thus a precursor to his lifelong dream of being involved in meteorology. Having an extensive and passionate career with the National Weather Service. He served as a commander in the US Navy. While stationed at fleet weather central Rota, Spain, he met his wife Toni.

After retiring from government in the late 90s, he pursued teaching and speaking events in the private sector until forming his own consulting business promoting safety at sea.

His professional accolades are lengthy, including being a US Coast Guard certified instructor for basic and advanced meteorology at training institutions like MITAGS, Star Center and Pacific Maritime Institute for professional Mariners.

He also trained commercial fishing and recreational boaters on becoming self reliant on vessel routing and prudent decision making. He has served as a keynote speaker at numerous boat shows and symposia across the country.

Together with prestigious Captain Ma-Li Chen from Taipei, they published a book (Heavy Weather Avoidance and Route Design: Concepts and Applications of 500Mb Charts) that is highly influential in the Mariner community.

He is survived by his wife, son and grandchildren as well his brother and sister.

Lee, may you have fair winds and following seas.” 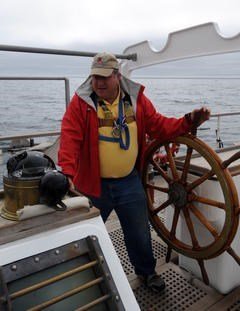 He really was quite a remarkable person.

Sorry to hear this. Really enjoyed a session he gave at a SSCA meetup years ago. Within a month he was the same age as I am - always a sobering thought.

I did two full days with Lee at a workshop he gave at the Toronto Intl Boat Show. He was very generous with his insights and materials. He was a passionate teacher, and definitely unique - the type of guy you would call  "a character".

I bought his and Captain Chen's book on interpreting at the 500 mb level thereafter. Not an easy read , a least not for me, but really opened my eyes to the three-dimensionality of weather systems and why upper layer dynamics matter at the surface.

Sorry to hear this. He had an impact on my knowledge of low pressure systems for sure. If you are heading offshore in mid or higher latitudes, read his damned book! Twice!

Ron Swanson said:
Sorry to hear this. He had an impact on my knowledge of low pressure systems for sure. If you are heading offshore in mid or higher latitudes, read his damned book! Twice!
Click to expand...

Done.  Well, not read (and certainly not twice!), but ordered.  In fact, that was the first thing that came to my mind when I stumbled across his obit the other day - that book, which I’ve long been meaning to get.  And have been reluctant to, because it’s pretty technical stuff.  But my next year’s BHAG is to dive deep into weather and routing, and do a passage using celestial.  Hopefully 500mb stuff isn’t too big, hairy and audacious of a goal

Lee gave a presentation at our little ole' Multihull Club in Seattle.  Lots of info, Q&amp;A and just a real nice helpful guy.   Except for a few passages on OPB, I'm not a blue water sailor but I'd heard of him.  I was surprised he was giving a talk for us as we aren't a high profile yacht club or anything.  I really respected him for giving us so much time.  He kept the 20 or so attendees engaged in the subject for a couple hours and we learned a lot.  I figured he must have lived around here as I know there was no honorarium or expense reimbursement.  Nice guy.  My condolences to the family.  RIP.

Yup, currently re-starting it.  (In fact, I talked to David the other day, since I’d signed up for it last year, got too busy to get into it, it fell by the wayside...called him up the other day and he said, no problem, we’ll just re-enroll you.  Great guy...course looks very comprehensive indeed.)

Cwinsor said:
I bought his and Captain Chen's book on interpreting at the 500 mb level thereafter. Not an easy read , a least not for me, but really opened my eyes to the three-dimensionality of weather systems and why upper layer dynamics matter at the surface.
Click to expand...

I have picked up this book at least a dozen times and made incrementally more progress each time before I get frustrated and put it back! I believe John Harries from Morgan's Cloud refers to it as "The Damned Book" which is spot on. Great read. Thanks for your contributions towards helping us yotties understand the bigger picture, Lee.