So…..I know and have read about Shackeltons Antarctic “exploration” but decided to listen to a new reading of Lansings 1959 book on audible. It’s read by Simon Prebble. Spectacular. Even though we all know the story and likely even if you’ve read Lansings book……..the reading brings a level of drama and realism I cannot explain. When the story recounted the shooting of the puppies as non-essential following abandoning the Endurance and heading out overland……I had tears in my eyes. Beginning to end it’s a wonderful story told remarkably well. Worth it.

Point Break said:
the shooting of the puppies as non-essential
Click to expand...

Point Break said:
the shooting of the puppies as non-essential
Click to expand...


Relax. They saved some to eat later.

It's a great book and I really should re-read my copy soon. I'm not usually a book on tape guy, but this might be a good one for a couple of 10+ hour flights next month since sleep is a lost cause in economy.
D

This is really something...... 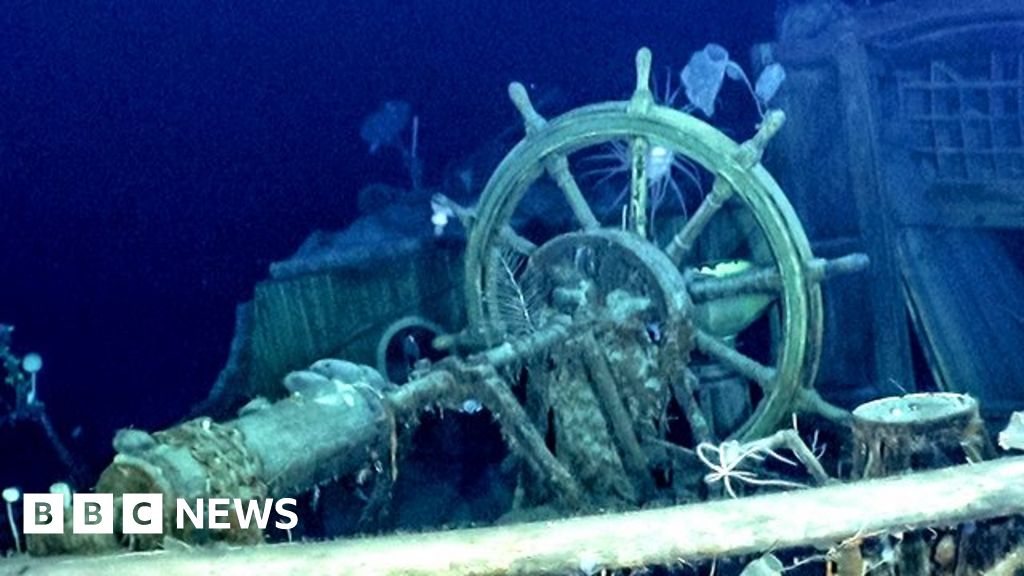 What was one of the world's greatest undiscovered shipwrecks is identified on the Antarctic seafloor.
www.bbc.com

Replica of the James Caird in Portland, England. Being readied to be shipped to Faroe Isles then Antarctica according to a local.

Crossing 100s of ocean miles in that beggars belief, finding your destination is mind bending Received this a gift a couple years ago, it still sits on our reception room coffee table.

Roger Morris was one of the captains of the replica HMS Bounty, and delves into the history of the Age of Exploration with an eye mainly towards the ships, but the history of those expeditions fills most of the book. He is also a very good sketch artist and his work in that area is what makes it a "coffee table" kinda book.

One of the mind-blowing accounts is about Anson's terrible "successful" voyage, left with:

"Out of about 1900 men who sailed from England, four died from enemy action and about 1300 died of disease and accident, and several hundred deserted at ports along the way. Only 145 of the 1900 made it back to England."

An interesting remark about the water they took on at St. Catherines (now part of Brazil) before going to round the Horn (and in that brief stop they lost 28 men to disease):

"The water both on the island and on the opposite continent is excellent, and preserves well at sea as water from the Thames, for after it has been in the cask a day or so it begins to purge itself, and stinks most intolerantly, and is soon covered over with green scum. But this, in a few days, subsides to the bottom, and leaves the water pure as crystal and perfectly sweet."

At one point on of the ships, the Gloucester, had a lot of trouble getting into St Vincent. The problem was of only 71 of the 271 who had been aboard when they rounded the Horn were still not-quite-dead-yet of scurvy, and of that 71 only three were still capable of standing on their feet. Could only set a couple sails and just failed to made it in before the tide shifted and swept them back out. Had to wait for the right wind direction to try again. That last half-mile to safety would take that boat 32 days to complete, and kill off about half of that 71.


The tales of the Age of Exploration are truly frightening.

Enjoyed the audio book very much. I think Prebble's reading is great and the British accent is an added bonus.

Going what they went though, then the crossing of the roaring 40s, then the climb over the mountains to the whaling station without proper mountaineering gear. Then Shackleton knocking on the Whaling Station Master's house front door. It took that Master a while to recognize Shackleton, and when he did, this tough leader - he broke into tears and wept. - I wept too. A remarkable story about a remarkable bit of lengthy endurance. (I read a historian at the Harvard Business School, wrote a case study about him that has drawn more interest from executives than any other that were taught.

A lot of Grit, stamina, perseverance and endurance in that book - and a whole lotta of luck. Also a lot of leadership lessons from Lansing's book Endurance. I first read about his exploits in the 60s in one of our National Geo large coffeetable books, as I recall it was, "Men, Ships and the Sea" I then read "Endurance: Shackleton's Incredible Voyage" by Lansing back in '85. When I first read about Shackleton, I was struck by how critical a leader’s personal commitment to his or her mission is.

Shackleton’s ability to respond to constantly changing circumstances. - When his expedition encountered serious trouble, he had to reinvent the team’s goals. He had begun the voyage with a mission of exploration, but it quickly became a mission of survival. This capacity is vital in our own time, when leaders must often change course midstream - jettisoning earlier standards of success and redefining their purposes and plans. Shackleton’s team knew that whatever came before them on the ice, their leader would give his all to bring them home alive. This knowledge was crucial to achieving the mission, and this commitment is key today when so much is changing so fast.

Our copy didn't sit to long in our library afterwards, before each of our children read the book once, and two read it twice. So well used my wife bought several good condition used copies at stores. Half way through '20 and after the start of Covid, my youngest son read it a third time.

The last image is of the ship's other lifeboat that remained. Inverted, it made a snug shelter from the cold harsh environment. - and was known as the Snuggery by the crew. 22 men lifted in this makeshift hut for four and a half months waiting for Shackleton to return. Mark_K said:
The tales of the Age of Exploration are truly frightening.
Click to expand... Shackleton's book "South" is a great resource, well worth reading. He goes into detail about his men, to whom he obviously paid a lot of attention to, and while the narrative is a bit dense the story is always good. Shackleton had a knack for keeping everybody thinking of each other, and in many tellings the story is kind of adolescent in the this is taken for granted, but Shackleton himself gives you a look at the rivalries and petty grudges that could easily have pulled the men apart.

He also recounts a bit about Worsely, the skipper and navigator. Apparently Worsely had a bit of a domestic streak because he was good at mending socks and clothing, which was a survival skill in these circumstances; but toward the end he was hard-pressed to keep his trousers together and the hike across South Georgia tore them apart. He was very irked at having to walk into civilization with his butt and legs showing, but he found some pins (where the fuck did anybody have PINS after all they'd been thru) and pinned his trousers mostly back together. Shackleton was kidding him unmercifully about his chances with any women they might meet, and Worsely rather loftily replied "I'll be looking better than you sorry lot."

Worsely remarked in his own book, they looked worse than scarecrows and must stunk awfully, when they walked into town on South Georgia. The first men they met refused to talk to them, in his account. He also said that he felt it would take him at least 2 months of rest and regular meals to recover, but after his first good meal (and good poop) and a nights' sound sleep, he was fresh and strong and ready to go all over again.
M

Yeah. What's mind blowing to me is that period after Magellan's ship made it back. Only 17 guys on one beat to shit boat three quarters dead from scurvy was all that was left of 5 ships with 270 aboard. Yet there were guys signing up for the next expedition. One of the survivors even. Elcano, who skippered the surviving ship back. Already wealthy from the load of spices they managed to bring back, he signs up to go out and do that shit again...?? Elcano didn't survive that next trip, btw.

Nearly all those ships, sent to figure a way to sail the spices from the islands back east across the Pacific to Panama, didn't make it back either. What happened to most of them is unknown, but there was one they found. About 50 years later another explorer would "discover" an atoll that hand odd looking natives, lighter skinned than most polynesians, one even had red hair. They had dogs that looked liked spaniels and some sorta understood some Spanish words.

On the reef they spotted some cannon and granite ballast stones through the clear water...

Shackleton was a very good and committed leader no doubt as evidenced by his crews willingness to follow each of his decisions. It says a lot about how he cared about the well being of all of them to the point where he took part in most of their toils not just standing aside and barking orders. The fact that throughout the lengthy ordeal his crew followed his decisions says a lot about them as well. In my career I read many books and studied leadership in trying and dangerous circumstances. From Sun Tzu to military writings on small group leadership to Lansings book. Was taught a lot by my USMC mustang father as well. Among many other concepts and lessons one of the most important and enduring for me was to care about your people and leave no stone unturned to provide for their safety and basic needs like food, sleep and water. Care about them that much and they will follow you through the gates of hell. He also worried about leaving the carpenter with the crew because of his attitude. He decided to take him along and left him with the boat as they went over the mountain to reach St George harbor.

Point Break said:
Shackleton was a very good and committed leader no doubt as evidenced by his crews willingness to follow each of his decisions. It says a lot about how he cared about the well being of all of them to the point where he took part in most of their toils not just standing aside and barking orders. The fact that throughout the lengthy ordeal his crew followed his decisions says a lot about them as well. In my career I read many books and studied leadership in trying and dangerous circumstances. From Sun Tzu to military writings on small group leadership to Lansings book. Was taught a lot by my USMC mustang father as well. Among many other concepts and lessons one of the most important and enduring for me was to care about your people and leave no stone unturned to provide for their safety and basic needs like food, sleep and water. Care about them that much and they will follow you through the gates of hell.
Click to expand...

The real James Caird in Dulwich College (London), which is a school founded in 1619.

The James Caird, a 23 foot whaler, that Sir Ernest Shackleton and five companions made the epic open boat voyage of 800 miles (1,300 km) from Elephant Island, 500 miles (800 km) south of Cape Horn, to South Georgia during the Antarctic winter of 1916.