barfy said:
^ nice, had to backtrack to find the article, the link is to a picture SBD.
I saw a big high heading over the area in a couple days, hopefully generates the wind.
Click to expand...

as long as it doesn't also bring some rain.

Sailbydate said:
Sorry @barfy Picked up the wrong link there. 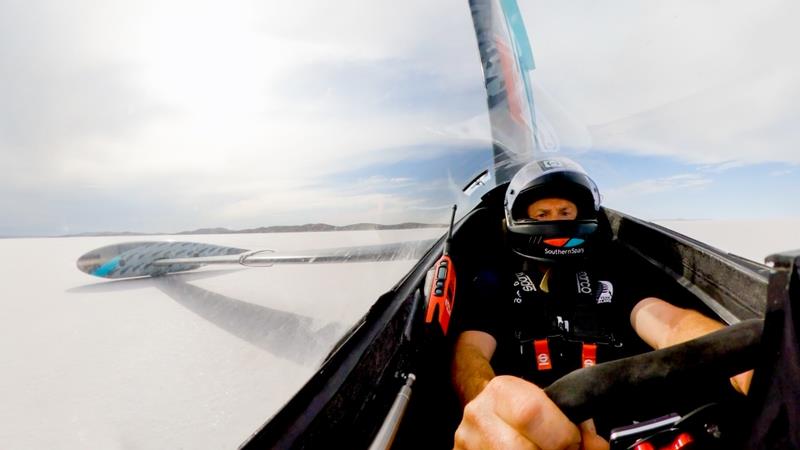 After what has seemed like endless weather delays over the past couple of months, finally Horonuku got to stretch its legs on a dry Lake Gairdner with breeze that is edging closer into the required zone for world record attempts.

They sailed the tread off the tires, nice.

May be this weekend could be the day?


Even before their first real shot at a wind-power landspeed record, Emirates Team NZ are under time pressure to achieve their lofty goal, before they must return to the water.

With weather conditions at South Australia's Lake Gairdner finally turning for the better, pilot Glenn Ashby is preparing take a crack at the world mark of 202.9kph this weekend, with an official judge now on site to verify the attempt.

The quest for speed has been a childhood dream for Ashby, who has achieved that goal as a world champion and America's Cup-winning sailor, but the record so close, he is keenly aware that the opportunity will be short-lived.

"You probably want to ask my boss, Grant Dalton, when the time's going to be up," Ashby told AM. "We are actually trying to have things squared by Christmas time, so we really only have a window over the next 10-12 days, before it gets too hot over the Christmas break.

"In January, it gets superwarm here - over 40 degrees a lot of the time. It's superhot in the cockpit as it is, so we're really narrowing right down to our available opportunities.

"If we can't get it done over the next couple of weeks, we'll have to make a decision on what we do next year."

In recent days, Ashby has had specially designed landyacht Horonuku over 200kph, learning how to handle the craft at top speeds.

"The faster you go, like in any electric or petrol-powered vehicle, the drag has a huge impact," he said. "The aerodynamic efficiency of the craft really comes into its own.

"We produce about 1.7 tonnes of sideforce on the wing, but only about 250kg of thrust, so there's a huge amount of sideforce that we need to react through the tyres on the surface.

"Getting the forces to balance out and be efficient is what will ultimately give us the topend speed."

"We don't want to just roll over that, we want to set the bar a bit higher.

"We've got a lot to keep working on and obviously, the conditions play a huge part. We need a dry surface, but we need plenty of wind as well, so getting those two to line up - and us being on the course at the right time - has proven to be a challenge."
Last edited: Dec 9, 2022

I hope our little genius is not hurt in the attempt!
C

cyclone said:
Didn’t realize that the video has been made public on YouTube


The Iron Duck story is a Ripper! Built for $6 grand...sold 20 years later for $31.....that's a remarkably small depreciation for a world record holding yacht!

Good to see no mention of time pressure or deadlines in that article above ;-)

now is the expensive bit now they got the timekeeper on site, certainly if it’s anywhere near as expensive as having somebody witness and ratify the water speed records

fish7yu said:
"You probably want to ask my boss, Grant Dalton, when the time's going to be up," Ashby told AM. "We are actually trying to have things squared by Christmas time, so we really only have a window over the next 10-12 days, before it gets too hot over the Christmas break.
"In January, it gets superwarm here - over 40 degrees a lot of the time. It's superhot in the cockpit as it is, so we're really narrowing right down to our available opportunities.
"If we can't get it done over the next couple of weeks, we'll have to make a decision on what we do next year."
Click to expand...


They do the Gairdner speedweek in march. that will be similiar temps as january, so the heat is just part of the deal surely.
Did no one think of putting an eski into the cabin for him, especially since they painted it mainly black?

^^^^ The heat may be similar in March, but the wind isn’t, and in between, heat is a lot more and the average wind decreases all the time.

Quite clearly, the best average winds are in September/October. Check out the wind chart and rose:

In March, the lake is crowded because racers prefer less wind, and the heat is on the way down.
L

Sailbydate said:
Interesting comments from Lenny in this, Sail-World article:

'It was the most positive session for the Land speed team so far, not yet about timing or clocking official records but identifying obvious elements that can be improved to increase performance to be able to achieve the best speeds possible'.

“The steering was tough work,” explained Ashby. “There is constantly a lot of load on the steering so this is the main focus to identify solutions to lighten that load as this will help with performance. From 90-95 true wind angle, which is where I am building vital speed it was really heavy but as soon as I bear away though, the steering wheel is neutralised and unloaded and goes very light and floaty. So to be able to build speed more efficiently and effortlessly will help in reaching higher speeds before the bear away.”

Actually interesting to know what is their strategy and real goal when seeing predictions coming in. Will they just be happy beating the record or they want a proper shot at it until they think they've extract most of the craft and had conditions near perfect.

Curious if they will mention breaking the record once they do it or wait for the final mark.
interesting to follow the effort, waiting for SP80 and Syrocco to follow eventually on the water (pretty quiet from them lately).
D

Is "Lenny" just a sort of contraction of Glenn or is there a more interesting reason for it?

Lakrass said:
Curious if they will mention breaking the record once they do it or wait for the final mark.
Click to expand...

Curious about this too. Hopefully we will get progressive updates if they break and break it.
J

Until it’s actually witnessed and ratified you haven’t broken anything.

thats the reality of speed sailing unfortunately. until it’s official no one counts it.

that’s why the WSSRC can charge what they do for official record attempts.

JALhazmat said:
Until it’s actually witnessed and ratified you haven’t broken anything.

thats the reality of speed sailing unfortunately. until it’s official no one counts it.

that’s why the WSSRC can charge what they do for official record attempts.
Click to expand...

They have Richard Slater on site.

This includes a video 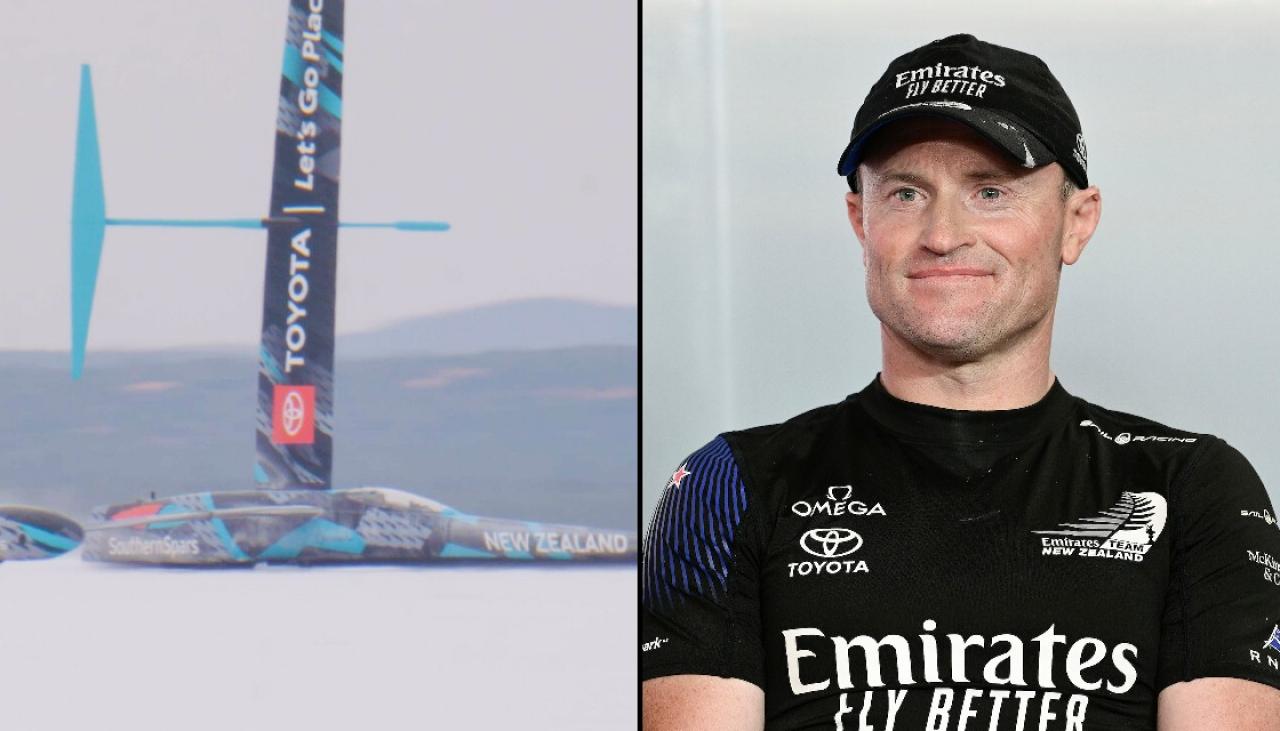 The America's Cup holders have until Christmas to break the world record of 202.9kph.

I hope they have good headlights...

@SCARECROW well done, beat me to it….
Click to expand...

we would have be almost word for word, but I couldn't remember Honoruku's name and couldn't be bothered looking it up.

One of links above says Yes. They switched to him when a NALSA official in Sydney couldn’t make this time slot.

We only cracked 180 a few times today ... We have another chance tomorrow afternoon ...

While winds reached over 20 knots at Lake Gairdner, they were too inconsistent for pilot Glenn Ashby and landyacht Horonuku to reach the 202.9kph required to set a new benchmark.

"Unfortunately we haven’t quite had enough breeze out there," said Ashby.

"We had a few tiny puffs come through that were just over 20 knots but they were super short lived and basically never had the wind strength to crack into any decent numbers."

Ashby did take the opportunity to use the lighter winds for some valuable test runs, allowing him a chance to further tweak their vessel in preparation for the record attempts to follow.

The team are optimistic for increased winds on Sunday, with the forecast hinting at breezes up to 24 knots.

"We are all like coiled springs at the moment and are ready to react at a moment's notice, so will be out on the lake ready to roll in the optimal breeze which is looking like arriving much later in the day," Ashby added.