My boat was built with a traditional teak eyebrow around the cabin trunk. When it is perfectly varnished with 12 coats of Epiphanes High Gloss, it is very comely, nevertheless I rue the day when I was talked into allowing it. It is a traditional detail originally done I think to keep drips off of the port lights, but at this point just an aesthetic detail. There is about 70' of it, which means 140' of taping while lying on the deck. Because of the profile, parts of the upper surface slope inboard. That results in water collecting there, at the edge of the varnish, inevitably lifting it. Also a result, when varnishing the varnish puddles to some extent against the tape and the tape will not easily release from the cabinside, unless a knife is run around to free it, or it is removed and retaped every 1 or 2 coats. In this climate, probably a coat every 6 months is minimum maintenance.

I'm looking for a solution. A few that have occurred to me:

1) Remove it. It will look a little bare, the uncovered stripe will need to be painted perhaps a contrasting color for that cheap production boat look.
2) Replace it with something that doesn't need varnish, like plastic Wood-Be-Wood. These all seem to eventually fade and so it would need replacement periodically I think
2b) Replace with SS, admitting that this is just a trim detail. A thin strip would be relatively easy, but I'm afraid would look cheap, a thick strip would be very difficult to fit to the compound curve.
3) Figure out a way to make it removable, it can then be removed to the shop every 6 months where varnishing would be easy.
4) Change the slope of the top of it to actually drain, which might make varnishing easier (only one or two tapings) and might make the varnish last longer (water actually sheds rather than puddles). I designed and printed a router jig which I think will work for this, but it is of course irreversible once bit touches wood.
5) Take a reverse mortgage out on the house, and set up a varnishing team to put a new coat on every 3 months, wood and refinish every 5 years.
6) Sell the boat. Swear never again to be lured into exterior teak by smooth talking NAs and boatbuilders.

I'm sure you'all have some brilliant ideas about how to fix this - let's hear 'em! 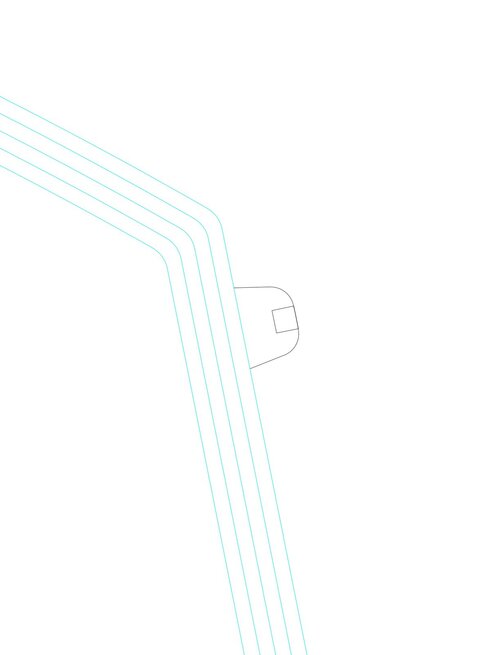 I vote for #6... I have one 6" piece of wood on my tiller and I begged the @Gouvernail to fiberglass over it... But he wouldn't and I'm stuck with this piece of wood that I have to sand and varnish every few years... The horror...

7) Paint it a dark color. Seriously. We painted the small amount of exterior teak trim gloss black. Looks great. In addition to having saved much refinishing time so far it looks nice all the time — not just for a couple of months after varnishing. Put a coat of varnish under it so it is easy to restore later (if anyone is so crazy).

However, I also like refinishing teak with a crowbar.
D

Yeah, I've thought about painting it. I'm afraid that the paint on top of varnish would still lift at the edge. The back side was back varnished long ago when it was mounted, but since then I assume - and it seems - that there is a naked edge all along the top. Water collects there as I said, and a naked edge on varnished wood (or paint for that matter) is sure to fail sooner rather than later. I was also talked into a teak caprail, but it does not have the edge problems, and I am making a cover for it to put on when the new varnish is finished. Covered varnish seems to last a long time. There is no practical way to cover the eyebrow.

Another alternative is to mold a fiberglass piece to replace the wood, and paint it. This would match the bulk and heft of the wood and would look better than a painted stripe. But I haven't imagined a way to mold that piece.

What worked for us, similar issue on gaurd and cabin brow. Varnish to level you are happy then prime and paint, after that cut fine sealant bead top and bottom if nessessary. You can leave or paint but 291 etc do well and are annual at most maintenance. Maybe not the asthetic you are after. As you know the only 100% is to remove precoat and instal and bed then touch up if fasteners are used. Long process and only good for a bit. The most success was the overlap of different coating and surface prep IE gel coat for you and paint, varnish.

I think you are in PNW, if so John Bailey, "Sir Isaac" or Russell Brown would be who I would go to, pretty much the perfection duo around here. There work is really about as perfect as it gets and both are very nice.
Last edited: Sep 13, 2022

What ought to have been done in the first place, #4.
D

This boat is no longer in the PNW, rather SF Bay now. Not that much fine boat maintenance infrastructure here.

I might do #4, if I decide that the alternative is to remove the teak entirely. There is some risk to the Awlgrip backing it up but I think my jig would prevent that (fingers crossed). Once embarked on that course, no going back.

DDW said:
This boat is no longer in the PNW, rather SF Bay now. Not that much fine boat maintenance infrastructure here.

I might do #4, if I decide that the alternative is to remove the teak entirely. There is some risk to the Awlgrip backing it up but I think my jig would prevent that (fingers crossed). Once embarked on that course, no going back.
Click to expand...

might be safer to build a jig for a hand plane...

Start with #4, work back to #1 if unsuccessful.

Can we see the jig?

Paint it, then bead of caulking.

Just spent a few hrs on Sir Isaac this weekend it has unreal brightwork to paint to bare wood lines all perfect. I would Pm Russel before going to demo mode. I do think a bright work or paint finish with white TDS bead would be appropriate and manageable but others can do it perfectly so might be worth some digging.

+1 on Sir Isaac. What an incredible job they did on her.

I have a similar arrangement, but fortunately only about 15 linear feet. I wouldn't dream of trying to tape the job. I use a painting guide - kind of hard to find, but imagine a section of aluminum venetian blind with a handle. You can just slide it along the joint, varnishing as you go. It takes me about a minute per foot of trim to put on a coat top and bottom. That's if you want to keep it of course.
D

Leeroy Jenkins said:
Start with #4, work back to #1 if unsuccessful.

Sure, though it is probably a little hard to grok cold. In place of the router base plate, top two fingers run along the top of eyebrow against cabin side, bottom two fingers run below the eyebrow against the cabin side. This creates the correct angle in ensure drainage. Router depth is set just shy of eyebrow thickness, fingers prevent overcutting down or into paint (in theory). I've 3D printed it and held it up to the work in various places, it appears that it would work but of course you don't know what you don't know. The screw holes are slotted and the depth of the router can be varied, so I could start with a light pass and then keep going.

I could not figure out how I would maneuver a hand plane around the corners - the eyebrow is formed to and follows a large radius around the trunk edge both forward and aft, with some rocker. If it were just straight along each side, many more possibilities exist.

I have paint guides of the type described, but haven't tried it in this application (they also don't go around curves real well, eyebrow curves both directions). I would think you'd have to clean the edge with solvent each time you moved it, our you'd leave a line on the paint? I am going to try one on the caprail next time (much less curvature and a more hidden edge). 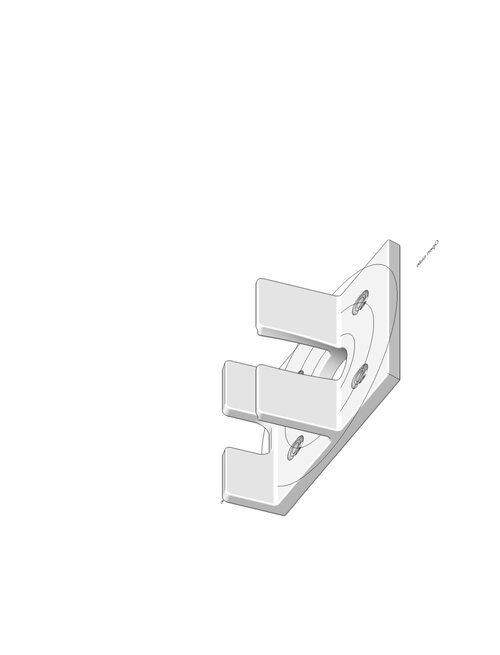 Next time I strip a section, I’ll try a shoulder plane. It might need a little tape on the side to protect the paint.

I’ve been thinking of then cladding the top face of the trim with a strip of thin, hard, brown-ish material that would be more impervious than varnish. McMaster sells thin sheets of a phenolic resin-paper composite. Think Bakelite or Formica but thinner. https://www.mcmaster.com/garolite/e...-xx-sheets-and-strips/thickness~1-32/width~3/
Maybe glue it on with TB3. Then varnish. Might this work?
D

A shoulder plane with some PE tape on the side might work. I'd still not trust myself to keep the same angle without some sort of jig. Even with the router, there will need to be some detail rounding with planes or sanding. I don't think XX Garolite would last well in the sun unless perhaps varnished, then we are back to varnishing all the time.

When the boat was on the east coast, the varnish lasted longer and was easier to keep up: boat was hauled every off season and kept inside, and the sunshine was intermittent even in summer. The west coast or south are relentless, boat is only hauled every other year for bottom paint, sun is 12 months. Both the builder and NA are north east coast where the season is 3 months and not that much sun.

One possibility to mold a fiberglass eyebrow is to use thinner strips of G10 and laminate it up in place, remove to sand, fair, and paint.

Another wild idea is #3, beginning to wonder if that can't be done. I'd need to remove all the teak plugs and screws, replace the screw holes with threaded inserts, and the screw heads would thereafter be visible. A 30' long 1x1 would be a little fragile to move to the shop though. Varnishing that piece in a shop inside would be dead easy, and the varnish could cover the back each coat so no naked edges.

Two ideas from the left-fielder who knows not very damn much...
1. Switch to hardening oil (tung, walnut, boiled linseed)? Soaks in, easily touched-up/repaired.
2. The West Systems epoxy manual has a lot of information about fairing and color matching; would it be possible to fair the water-trapping surface to a water-draining surface (and not have it look obnoxious)?
L

Too far from Anywhere

In terms of changing the slope so the top drains, how level does the boat sit? Need to accommodate a slight heel to either side with enough of a slope change so the high side drains too.

Ok. Epoxy coat it, then paint it black or brown.

The epoxy should seal the joint enough and stabilize the wood so that water won't attack the paint.