Abu Dhabi Ocean Racing OBR Matt Knighton and I are launching a video podcast/TV show this week that highlights the best OBR work from each leg, and gives out an award to each OBR.  If you really liked someone's work, post it here and it will get a better chance of being featured on the show.

Feel free to link to FB, Insta, YT, the Google Doc video log, or the VOR raw page, and thanks.

Yay! Just in time to incentivize me to finish watching all the Leg 1 videos.

#1 vid: https://www.youtube.com/watch?v=7JhKjdPewxE of course. Rare moment to catch almost all the fleet during a key moment with fine weather in an iconic passage yada yada yada. VOR was prepared and capitalized on the moment. (yeah, minimal OBR work, but still . . . )

Drone footage deserves its own category.

For OBR Photos-- the humour and framing of this still shot made it #1, but it didn't make the Best list on the VOR page

@MR.CLEAN What's the playbook for the OBRs this time? Would like to know why they were pretty quiet about hitting fish (or whatever) and the ensuing backdowns on DFRT, BRUN, and probably more.

up on FB and YT now

Interesting show. Thanks for putting it on YT, because that meant I could stream it to AirPlay and hook my wife into becoming more tolerant of my VOR pastime.

Appreciated the discussion about drone piloting. Thought jbc deserved some credit for the video indexing.

Sorry for commenting here rather than the FB feed, but I decided against a FB login.

Clean has already given me an embarrassing amount of kudos for the spreadsheet  in the forums here. And while that might be sort of interesting content for someone obsessive enough, it's way meta. This show is about the content coming off the boats, which I love and (obviously) am going to watch every minute of going forward. He doesn't need to talk about the tools he's using to organize and access that content; I'd rather he talk about the content itself, like he did.

It's true he also talked about Musto and Immersat. But they paid him to do that.

I loved the focus on the human storytelling. I thought it was super interesting to hear Matt talk about how Konrad Frost was putting together those character elements with Martine, and how he (Konrad) is from a TV background.

I also loved the Scallywag on-board stuff. I wonder to what extent their looseness is the result of Witty being such a character vs. their not having a traditional sponsor so the crew doesn't need to worry about whether f-bombs (or whatever) are going to conflict with the sponsor's brand. Or maybe it's that Jeremie Lecaudey is really good at getting that stuff. Probably some of each. It will be interesting to track the output of the different OBRs as they rotate.

Loved the talk about drone shots. That low-elevation shot that [SIZE=12pt]Jeremie got of Scallywag was one of my favorites, too. A cool thing (that I'm sure you already know): If you want to know how high the drone was when it shot the image, find the point where the horizon intersects an object of known height. An object directly in front of the horizon is always going to be at exactly the same altitude as the observer's eye (or camera). I was super impressed to have a drone shot where the horizon cut through the boat's hull -- that is, one that was shot with the drone below deck level.[/SIZE]

[SIZE=12pt]If you do q&amp;a in future episodes, I'd love to hear Matt talk more about the experience of being on ADOR last time. Because that team was so stingy with releasing video, and because his stuff was so good in painting those human stories, I always felt deprived not to have more of it to watch. There was an early video (Leg 1 I think) where Ian was razzing him (Matt), teasing him about sleeping so much (I think? Something like that; making fun of his name because it should have been "Night Off") that made me wish I could see more of life on board Azzam.[/SIZE]

Look forward to seeing the next episode. One thing that I loved about the Mapfre photo is that the guys are eating - something everyone has to do - makes it relatable even to non-sailors.

Side note: I've made some progress on automating updates to my spreadsheet. It should now update automatically every 15 minutes, with new videos that have appeared on the Raw Content page added automatically at the top. I'm adding length, people, description, and tag metadata as I have time; at least for now I'm having enough fun with it that I should be able to keep those parts pretty up-to-date.

If you click on the little "Golf Tee"-looking button: 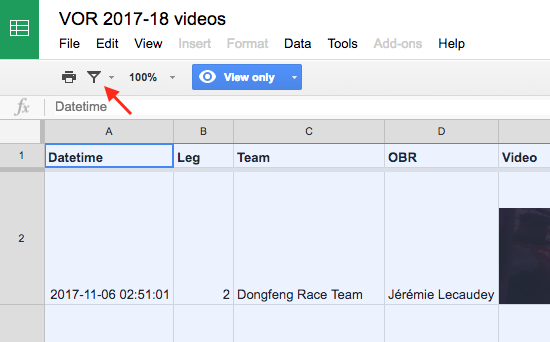 ...and then choose "Create new temporary filter view" from the menu: 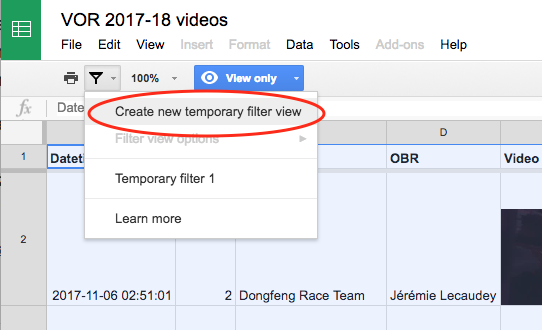 ...it lets you do things like filter the sheet on the People column to only show videos with Martine (Clean), or on the Tags column so it only shows videos I've remembered to tag "drone".

Next on my agenda (if/when I can find the time) is seeing if I can access the YouTube API to populate another tab or tabs with VOR-related YouTube videos. That stuff's already indexed and searchable, so I'm not sure it would be useful enough to be worth it, but it might be handy to have it all listed in one place.

Let me know if you have suggestions for improvement (e.g., things you'd like to have tagged). Thanks.

I'm a sucker for puppets. Couple of questions:

Wisdom. VOR mascot for quite a few years. (gad, I dislike mascots. sorry.)

Ah, thanks! I remember that now.

Hm... Looks a bit like you are producing to a hard time target.
The start is similar to the podcasts with a long intro. [Which is actually not a bad as others, no 70+ minute intro talk about beer and cars. Yet. ] To the end pace gets a bit hectic and then seems to cut of. Did you ran out of material or got kicked out of the location?
Lets see how show 2 turns out now that the preliminaries have been said.

Topics discussed
The dreaded race reports. Very short shelf life indeed. Yet this round with so much stuff getting pushed fast and directly to the fans I'd say they are more relevant than ever. Now if the VOR would add those to the tracker at the correct position so that it easy to make sense of them... That way you could easily ignore old ones, or replay them when interesting situations developed. If bandwidth was free I could see them become a staple product. It's not like they take much effort either. If they just had someone with a phone and 90 seconds for a raw social media post.  Leave the OBR for the big well produced version that tells a story.

Some - a lot! - of the content has been seen before. But not this edition, leg, day with sailor XYZ.
I think of it as stock photo &amp; video production. Nothing to write home about per se but required none the less. Can't use the stuff form last year after all, wrong sponsors. That is not the most creative part of the OBR job, I think of it a bit as wedding photography. There are some things that just have to be done every single time. It does not matter how good and creative the rest is if standard items are missing or got fucked up there will be trouble.

Brunel on their Leg 1 go slow..main trim at night wasn't the problem. 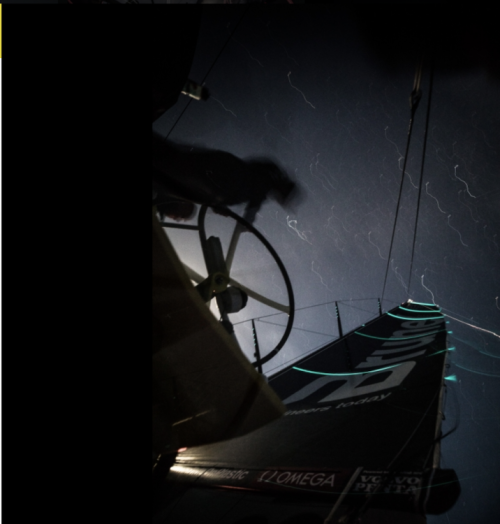 I loved this one from today:

I'm not usually a big fan of the OBR making themselves a character in the video, but I'll make an exception for Sam here. Getting the shot of himself barfing: That's a new standard of sports journalism.

duncan (the other one)

jbc said:
I loved this one from today:

I'm not usually a big fan of the OBR making themselves a character in the video, but I'll make an exception for Sam here. Getting the shot of himself barfing: That's a new standard of sports journalism.
Click to expand...

A bit of reality. Barfing and plastic urinal emptied into the cockpit.

This one was great too:

As soon as I saw them shifting the stack I thought, whoa; is Sam going to get a shot of them gybing in those conditions from the drone? And he did! (Mostly.)

mmm...me thinks this thread will be my go to thread every morning. Thanks Clean.  May also decrease my productivity at work. Like I need that like a hole in the head!!!