The final award from Coral Reef Sailing Apparel, goes to whoever can guess the elusive Sarah's underwear color. Go for it. Pics coming.
Click to expand...

So do I get the swag or should I FedEx you a Ziplock?

Clean, did you ever get a copy of the redress request result? I'd love to see how "something" can conflict with "nothing."

Thanks a lot Clean,

You do a lot for the sailing community with such good coverages.

Big thanks from France

The interviews are great stuff. Thanks

Just shook the cobwebs out...and we've got lots more interviews to post. It's a damned good thing I didn't have my camera last night.

I'll go through the threads and get the prizes sorted out either today or tomorrow. That was pretty fun, and thanks to Lauren, Heidi, Amy and Sara for being good sports.

Andy Burdick is loading up now - he answered some of the questions about the Melges 20 that have been asked in these forums. Sit tight.

Excellent job Clean. Congrats to QR on a great regatta and win. Some serious talent in the top 20.

Outtasite job, Clean. For all the shite you get, this latest effort was your best yet. Props to your whole gang and Mer's photos, too...in fact, major props there.

My productivity on the yob fell to an all-time low, that's for sure.

Andy Burdick, Melges VP, on the event, the competition, and even about the Melges 20's less than stellar showing at the Stonington, LI sportboat demo day.

Velocitek award a thousand bucks to Chris Larson for reaching the top speed on the Vtek day. The day before, speeds in excess of 23 knots were clocked.

There are some other cutesey awards too.

How the folks at EYC roll. This is tractor racing on haulout day. 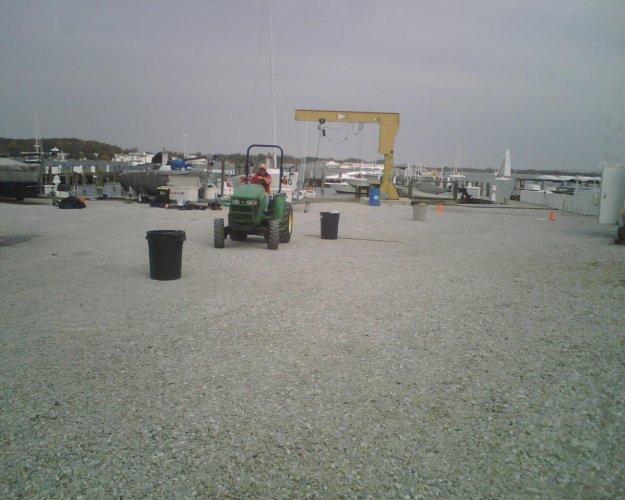 hey clean did you really get kicked out or was I misinformed?

HSG said:
Excellent job Clean. Congrats to QR on a great regatta and win. Some serious talent in the top 20.
Click to expand...

Thanks Scott. Any regrets for selling your boat?

I think I got kicked out of the Cougar Fish, but that's all. Apparently the girls and I were dancing a little too dirty.

MR.CLEAN said:
I think I got kicked out of the Cougar Fish, but that's all. Apparently the girls and I were dancing a little too dirty.
Click to expand...

Awesome job on the regatta. I have been checking in on the site almost daily for awhile but was too thick to realize you did OTW coverage of the regatta. Knowing you will be at KWRW will make it tolerable that I will be missing another one. Keep up the great work and hope you enjoyed our little sailing venue of Annapolis.

In case you missed it on the front page:

Terry Hutchinson is like a big kid. Sporting a baseball cap and sunnies all the time, Terry walks around with a grin on his face, the gap between his two front teeth adding to a look that is more boisterous schoolboy than one of the most talented sailors on the planet.

Terry's youthful air makes it easy to like him, and his contributions to this site give us reason to cheer for him - and this week, he again gave us a lot to cheer for. Along with Scott Nixon, George Peet, Amy Ironmonger, and Brian Janney, Terry dominated what was probably the most talented fleet ever assembled for a Melges 24 event on this continent at the North Americans in Annapolis, MD.

The regatta itself was intense and exciting, with everything from 20+ knots to non-existent breeze, though the turning point of the event happened during the start of the fourth race run on Thursday. Over 20 boats were called back after a hectic countdown - and they included three of the top 5 boats. Flavio Favini on Blu Moon didn't hear his number until halfway up the beat, and they promptly sailed back the dock instead of continuing the race and neither Morgan Reeser (M-Fatic) or Dave Ullman heard their numbers - Ullman's radio was actually switched off when the call was made - and both were scored 50 for the race. From that point, only Gabrio Zandona on Joe Fly could catch Quantum, and Hutch sailed faster, smarter, and never gave them the opportunity. Ullman, Reeser, and Favini filed for redress for that fourth race, citing the NOR provision that only allowed the RC to run "2-3 races per day" - an argument that was tossed out once, then again after a re-hearing. Ullman is confident that an appeal would have merit, but to his credit, he and the rest of them chose to let it go.

We're not going to give you a full regatta report here - we didn't post 93 videos, hundreds of photos from Meredith Block (like the one above) and Sara Proctor, and thousands of words over the past week in order to repeat ourselves. In fact, if you're a sailboat racer of almost any kind, you owe it to yourself to read this entire report yourselves, and then you won't need to leaf through any press releases or other inferior forms of news. It's got a little of everything: Big air, light air, great video interviews, gorgeous pics of M24s and even some big IRC boats, drunken rambling, chicks with no panties, t-shirt contests, and some of the best buoy racing that's ever been broadcasted on the internet, from before the first gun through the end of the final party. We hope you all enjoyed it half as much as we enjoyed bringing it to you - look on this front page in a few days for more info about our next OTW Anarchy event.

For one last time, please let our sponsors know that you appreciate their support by checking out their websites and patronizing their companies the next time you need something they offer. They are:

Coral Reef Sailing Apparel provides the customized and technical apparel for over 150 events a year, as well as numerous private teams and a growing group of Class Associations.

Latis Yachting Solutions is a full-service yacht transport and rigging company. John Woodruff may specialize in sportboats, but he can move and rig anything from a Melges 20 (Latis brought the prototypes from San Francisco) to a big Beneteau. Unlike many people who drive boats around, Latis is bonded, licensed, and insured, making a difference to those who don't want to take any risk with their expensive boats.

Eastport Yachts, the builder of the gorgeous Eastport 32 "luxury workboat" (as I call it) that we took all week. This boat is just phenomenal in every way, and I would love to own one.

The comments we received have been wonderfully encouraging, and we truly thank you all. I may sound like a broken record, but this would not exist but for the engaged, interested, passionate community that has made it possible.

I think we finally did prove something important here - something that people have been saying we couldn't do. It is not easy to make buoy racing it interesting for at-home spectators, but it can be done, and done well. Some of the stodgiest, least computer-literate sailors I know told me they "never spent five hours in front of a computer for anything in their life, but they did it for four days this week."

I think the Class also proved something to themselves - you cannot take a journalist, stick him on a boat with a camera and computer, and come up with something even remotely like we do it. The Melges 24 Class tried, and came up with a cheap copy that wasn't interesting or compelling. Classes should stick to running races and classes. If they want live coverage, there's really only one option - and that's us.

Speaking of coverage, one of the other guys that does a damned good job of video coverage is Luca Bontempelli, of Sailrev.tv. While it's mostly in Italian, Luca and his cameraman produce same-evening video like Tucker Thompson and Gary Jobson do - only with talent. Check out the site for some great videos of the racing, as well as of our boat getting in the Italian journalists way. You'll love how they say "Sailing Anarchy" in Italian - I think it's something like "motherfucker."

And enjoy this photo one more time. 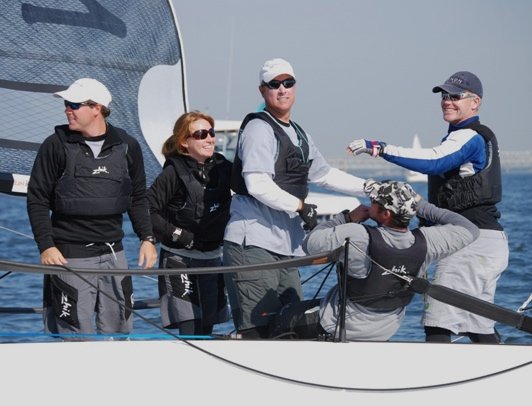 MR.CLEAN said:
How the folks at EYC roll. This is tractor racing on haulout day.
Click to expand...

I may not have been able to pull out a win on the water, but at least I capped my week off with a win on the tractor!

HSG said:
Excellent job Clean. Congrats to QR on a great regatta and win. Some serious talent in the top 20.
Click to expand...

Thanks Scott. Any regrets for selling your boat?
Click to expand...


Absolutely. I regret not being out on the water and competing at an event like Nationals, NA, etc.... Melges 24 has the best people involved, best product and best talent of any class at the moment. I loved participating for 8 years in the life of the Class and serving as an officer. I met a lot of excellent people and had the opportunity to compete against the best sailors in the world. However, it is time to focus on work and family. No regrets about the decision. I will be out there again when my son is able to compete with me.

The coverage was exceptional and it made the pain of not being on the water less intense. Thanks. Further, it was good to see Nixon and Quantum win a big event. They have invested a great deal in assisting to build the fleet in the SE and it is good to see them win one of the big events.