This really cool brand new boat was hit by a wave so big it pushed it backward and broke the rudders. They hand pumped for 50 hours but decided to call for a rescue because the weather was predicted to get worse. The executive editor of Sail magazine was onboard! The boat was less than 2 weeks old. 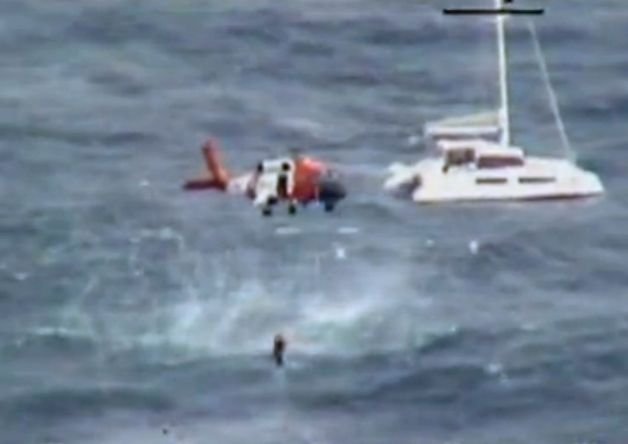 Did the boat survive the storm?

Sounds like somebody needs to look at the structural calcs.

vmg said:
Did the boat survive the storm?
Click to expand...

They were just rescued yesterday so wait and see I guess.

Guess there's a salvage bargain here!! But I dunno, this design just does not work for me, moreso if it loses both rudders like it did....

Whatever happened to seamanship and being resourceful?

They could have steered by balancing the sails + using a drogue (can be improvised by dragging pretty much anything behind if you don't have one) on bridle. This should have brought them at least closer to shore to a point where they could have gotten a tow.

I can understand having more money than sense and letting the insurance deal with the aftermath. But surely having to completely abandon your plans (until you can get a new boat) and leave all your stuff behind doesn't seem like it would appeal to many?

Hand pumping for 50 hours not trying hard enough? Steering a course with the sails and trailing drogues is a fine art in some boats ( hull forms ) others it's impossible.

Leaving the seaworthiness of the boat out of the question for a minute .... it's not a matter of money, it's a matter of life and death. The skipper who doesn't take rescue when he should, could well end up in jail for manslaughter and have everything he owned taken off him. The skipper is responsible for the lives of all the crew. He needs to make the call.

There was a really good story on the front page a year or so back from a guy in the states who was in the North Pacific ( I think coming back from Hawaii ) accomplished sailor, with a well proven boat that had a series of system failures. Over the course of a few hours ( whilst talking to GC and friends on the radio ) he knew rescue from here on in was going to get a lot tougher and despite not sinking and having power etc he decieded to make the call and get off. When the freighter came a few hours later it was blowing snot and he knew he had made the right call. He sunk his own yacht by pulling seacock on his way out. Had he waited, the freighter might have been too far away, he might have drowned, then his yacht could have caused further injury or death to someone if they ran over it in the middle of the nigh,t so he made the right call and is a better seaman than the guy who would have tried to stay.

SCANAS said:
Hand pumping for 50 hours not trying hard enough? Steering a course with the sails and trailing drogues is a fine art in some boats ( hull forms ) others it's impossible.
Click to expand...

And the weather was supposed to get worse. The executive editor of Sail magazine was on board, too. I reckon he's a pretty resourceful sailor, don'tcha think?

How do you put yourself in a position, to get driven backwards??,

Keith said:
How do you put yourself in a position, to get driven backwards??,
Click to expand...

Sometime Mother Nature does that for you.

I happened to read somewhere that one of the crew onboard was actually a writer/editor for Sail Magazine. I am sure that there will soon be an eyewitness account of what exactly happened out soon. I'm also pretty confident that there must be some salvage effort underway already to rescue the boat which i was told cost about 700k by the time it was ready to leave for the BVI from NY, If not only to examine the why and how cause of the damages. With several new boats under build I'm sure that they want and need to get this figured out ASAP to ease the concerns of buyers of hull no. 2,3 and 4. It's a shame that they left in the conditions they did and time of year. Having done many a Newport/Bermuda I can attest to the nasty seas possible out there. Glad no one was hurt and it's a real setback for not only the Alpha team but also the multihull market. With Phaedo GB66 being the only dropout and rig lost out west in the TP and now the Alpha 42 incident out east it doesn't bode well for those of us selling cats. Look forward to getting the full story and hope it's easily solved in the future boats built at Alpha.

You got to love the last guy (presumably the owner) bringing his Igloo cooler with him. How the Coasties can risk their asses for twerps like this is beyond me. Thumbs up for the CG and Navy but this is getting to be a bad habit.

I noticed the diagonal line on the helo deck and the chopper pilot put her down precisely on that line. I guess that line is the optimum angle to land into the wind to keep out of turbulence from the ships superstructure. I have to remember to put that line on my next yachts helo pad!

I had an urge to jot down the lat lon from the closing frames of the video and go up to Norfolk and charter a boat and go and get that piece of loose change that these fools must think the boat represents. And we wonder why our boat insurance it so high?

I think that was the editor.

Keith said:
How do you put yourself in a position, to get driven backwards??,
Click to expand...

Happens to the best of them. May it never happen to you!

Must have been his typewriter in the Igloo?

Kind of like the people in the Korean Airlines crash in San Fran coming down the evacuation slides with their rollaround bags. I swear if people were pulling that sort of crap out of overhead storage after a crash and the plane was catching on fire I would crawl right over them. If this was a life and death situation then WTF was the Igloo all about? What next, valet parking when you decide it has gotten a bit nasty on the high seas and want to bail? I'm sure we will get a great first hand account from the Ed of Sail.

I'd like to know where all of that water being pumped out was coming from, if the boatel is sinking and if they have or deployed a drogue which was lost. For educational purposes of course. It was legitimately rough out there.

PM me if you want to do a salvage job.

Very weird both rudders snapped- especially if the same time.

Something like that happening would make me think someone got their maths wrong,