Looks like a cool concept. Will these hold up slapping the water.

If you can retrofit a boat to add this I have just the platform. A Santa Cruz 50 with the raised settee looks like it would be possible to install this system and not even have to lose any cabin space.

what the heck are you talking about?

Infinity 36 DSS Read the story of the Quant 28 DSS in the Sportboat forum-racing record second to none..... 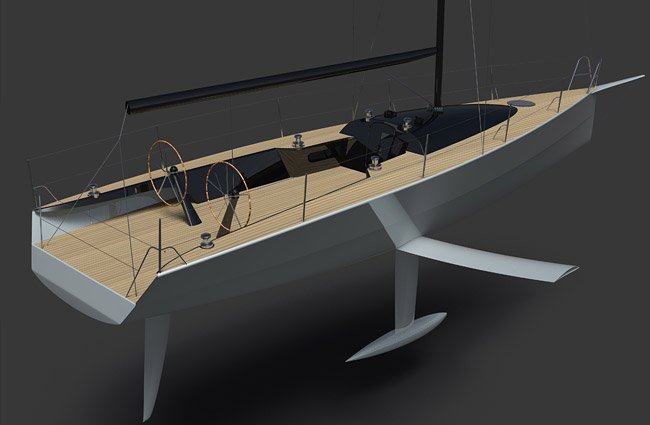 Most of the images are of reaching or downwind.Do you deploy the wings when beating as well?

Where is Foiled! based? Is it being kept on the med?

Sydney AU or Castelbianco IT

Interestingly the foil looks a lot shorter than others I've seen in videos and photos. Was that all that "Foiled" had or was it just not full extended because of the conditions?

Retrofitting options would be interesting, but I think the patent is going to limit this technology more than performance or hassles with marine growth. I hope it does not start a trend of designers taking out patents every time they try out a new foil in a new location. Now if they invented the anti gravity righting moment device, now that would be worth a patent!

It goes like shit off a hot greasy teflon shovel, but often has difficulty sailing to its rating, but the owner really does give a damn about ratings.

so I had to rewind the video when I noticed and cottoned on to the mainsheet bridle sans traveller....

Curious if there is any of the FOILED folk here who are keen to talk about setup of not just the foil. Square top main, must do a lot of vang sheeting?

Spoonie said:
so I had to rewind the video when I noticed and cottoned on to the mainsheet bridle sans traveller....

Curious if there is any of the FOILED folk here who are keen to talk about setup of not just the foil. Square top main, must do a lot of vang sheeting?
Click to expand...

Have to remember there that this is not a full on race boat - brief was from a Med based owner who wanted something simple, light and fast for fun day sailing and the ocasional local races.

So ditching the traveller, hanked on headsails, main on cars, pushbutton wing control all keep it as simple as reasonably possible.

Fortunately we have been allowed to use the boat for the odd race as well, but we don't have full race sail wardrobes, and so overall the performance has been very satisfactory with those constraints.

To other queries above - yes we do use the foil uphill if we're getting the top end of numbers.

Wave slapping with the boat quite upright? Not a problem - the system is designed to cope quite happlly with all sailing conditions, and this boat has already seen a lot of offshore miles in some very nasty Mistral conditions as well.

There's a good video on the Infiniti website, taken from the bow and heading downhill in a hurry ( top teens and into the 20's ) where you can see the foil running into and through waves and acting as planing surface as well as being an immersed wing.

Thing is here, we can arrive at the situation where we have more RM than we need, in which case the boat is coming upright, and only enough of the wing is then immersed, or is surface running, to generate the useable power.

Both 36's are in Palma this next week for the Palma Vela - heading down there tomorrow! Ratings - IRC has us at 1.232. ORC 515 so no guesses as to what we're racing under in Palma!

Interesting here in that IRC has apparently become even more of a closed shop in favouring the Eurotank approach while ORC is much more open to development. Quite a reversal of positions....

Touch of Gray said:
Looks like a cool concept. Will these hold up slapping the water.

If you can retrofit a boat to add this I have just the platform. A Santa Cruz 50 with the raised settee looks like it would be possible to install this system and not even have to lose any cabin space.

Hi, I have done a lot of miles (all of them) on the Infiniti 36, although not the second one and a lot of miles on the first test boat, the 27. There are some films here http://vimeo.com/channels/415217 which pretty much show the boat sailing in most conditions. I have been working with Hugh on this for about a decade and where he is a very smart naval architect I am not..... my background is lots of miles on some reasonably sized boats. I still come back to the dock in awe of what Hugh has invented - no manner of talking or describing really does justice to the excellence and simplicity of what has been created. This is simply the biggest (sane) change in yachting for the average guy up to the extreme solo sailor in decades. We have developed this in an extremely methodical manner, never trying to run before we could walk and now, we are about to announce a pretty significant project, but we need to wait a day or two for that........ There are plenty of people who question how it works or indeed, if it does work but they are not people who have sailed on one of the boats! Hugh does an excellent job on this forum of answering technical questions but today he is traveling so it falls to me to try and answer the questions. Yes, we have a square top main, it is not excessive, around 22% for the top, this is nice as it is not too draggy and when we have a reef in the main the twin top mast backstays can both be set, so no need to worry about the rig. The bridle works very well, I was sceptical at first but Hugh was spot-on; only when racing the very, very light Palermo to Monte Carlo race did we need to run a hauler to windward. It is nice and light and simple. Yes, the vang is pretty powerful and when we are seriously wicked then it is the primary main sheet control. Otherwise the boat is the same.....but different. It is great fun to sail them all, especially when you consider the concept that the more speed you can derive from your skill/trim/helm/balance etc the more the foil gives you back.... the faster you go, the more the foil works. It is also worth noting that this is about the hardest size to "do" for DSS. There are a variety of reasons for this, and Hugh is best placed to explain but if you think that basically the faster the boat goes, the better the foils work.... so, a 36 ft boat is naturally slower than a 70ft boat... and therefore it is harder. The smaller boats we have done get away with this because of the racks and water ballast etc. So, to say we are very happy with the Infiniti 36s is a massive understatement, they, like all the boats have outperformed expectations - hope this explains a few things.