Fund Raiser for Hans and his family

Fantastic response for a sad reminder of how extreme these sailors and boats are pushing the envelope.

Best wishes to the family from everyone here sailing in South east Asia.

Certainly the photo above cannot be matched for not tugging, but throttling the heart strings.

Hope the pockets around the sailing world arent too deep for this unfortunate happening.

Hans Horrevoets talking about the job he loved

Let's all do what we can to help.
Click to expand...

On May 18 2006, tragedy struck the Volvo Ocean Race. Dutch sailor, Hans Horrevoets, was swept from the deck of ABN AMRO Two. In a superb feat of seamanship, his crew mates managed to turn the Volvo Open 70 and find Hans, but he never regained consciousness. The young crew, which Hans had helped to select, finished the Leg with a team mate who would never leave his bunk and go on watch again.

Hans left behind his wife, Petra, his little daughter, Bobbi and Bump, as he affectionately called his unborn child.

Flags flew at half mast in sailing communities around the world, tributes to Hans Horrevoets poured into ABN AMRO and were posted on internet sites worldwide. Many spoke of his sailing skills and experience, his desire to help young sailors, his cheerfullness, steadfastness and the many other qualities that endeared Hans to everyone who met him.

We bring you the thoughts of just two people; Alan Block, who had a brief encounter in a bar and Carlos “Lua” Mauro, who knew Hans well.

I spent a single day with the Volvo competitors, in Baltimore, last month. Most of that day I sat in wonder at the intense levels at which the sailors functioned, whether prepping, sailing, navigating or planning. I was surprised that every single one of these professionals was as enthusiastic about their race and the sport as a pumped-up junior laser sailor. Sailing is their passion first and their job second.

I spoke with dozens of sailors and support crews during the day and some of the guys from ABN One invited me to come meet them at a nearby bar to say hello to the others. With my travelling partners asleep in the parked truck, I ran over to the bar and was surprised to see the entire ABN-AMRO team there joking around and having fun. I joined Bob Greenhalgh, Andrew Lewis and some others I didn't recognise for a drink. We raised our glasses in hopes for a stiff breeze to New York for the powerful ABN boats. We traded war stories and bawdy jokes, as sailors do, and the loudest laughter came from a crazy-haired, square-jawed Dutchman. His smile was as bright as the white-painted carbon on the boat he sailed. His laughter and his smile reverberated through the bar as other team mates got closer to hear the jokes. Even the waitresses sidled up to the table to hear

the man laugh. I looked at my watch and realized that a five-minute hello had turned into a 30 minute visit to the ABN comedy club.

As I said my goodbyes to this congenial and inspiring group, the Dutchman told me his name was Hans, and that he was glad to have met me. We spent less than a half hour together, but I will never forget the way his laughter filled that room. 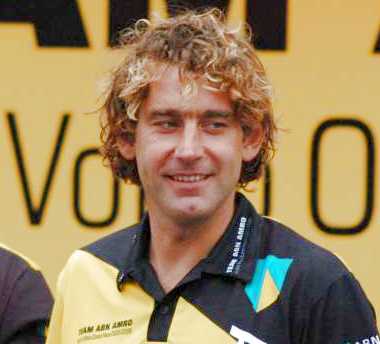 Why do certain things happen? Why do certain things that make us feel so bad insist on disturbing our lives and disrupting our emotions? Why, why and why, can be forever and constantly asked and we will never get a proper answer. Hans, being the special person you have always been, we will always remember you with particular affection.

We will remember how much you dedicated - heart and soul - to the task of selecting before the race a young and inexperienced crew and making them Sailors with a capital S. All the while knowing before everybody the answers to what you were looking for.

What a tough task, heh? Only you can know exactly how much it took of patience and talent to do it. After all you were being, at the same time, the judge, the teacher and the mate who would allow them to take part in a shared dream! One that is so big, important, significant and essential because it takes courage, knowledge, strength, dedication and sacrifice. In massive doses.

know it, turns into the focal point where millions can join in in their dreams of a better life. Yes, Hans, we will always remember with particular fondness that tough and demanding period.

Many more will always remember you for other aspects of your life, with their own particular thoughts. More personal, detailed, colourful, older or newer, it does not matter. We are absolutely sure that they are as important and the enormous volume of these good remembrances of you will make us temporarily forget the Why. Until the inevitable moment when each of us will also know the answer that you already know, once again before we do.

Please make a donation, in memory of Hans

for the benefit of his beloved Petra, Bobbi and Bump

Keep up the good work everyone, I'm extremely proud to see this happen and be a part of it. I think we are doing something that is fantastic , it will help the family. I think a few tears are hard to hide, SA you rock.!

Hey Mid, Nice words mate, as always. Your support is appreciated. Thanks everyone.

The tragedy is certainly getting attention in the UK. http://www.newsnow.co.uk/newsfeed/?name=Sailing&amp;type=ts

Let us hope that the mainstream press pick up on the Fund.

marian said:
The tragedy is certainly getting attention in the UK. http://www.newsnow.co.uk/newsfeed/?name=Sailing&amp;type=tsLet us hope that the mainstream press pick up on the Fund.
Click to expand...


Anyone have any suggestions as to how we can help bring the story to the mainstream media and its larger audience?

marian said:
The tragedy is certainly getting attention in the UK. http://www.newsnow.co.uk/newsfeed/?name=Sailing&amp;type=ts

Let us hope that the mainstream press pick up on the Fund.
Click to expand...

Anyone have any suggestions as to how we can help bring the story to the mainstream media and its larger audience?
Click to expand...

Whatever BYM puts on will be picked up by wire services, like moreover, so should automatically reach the front internet pages of various mainstream publications. The problem is that it wont stay there that long as the majors update their RSS feeds pretty frequently.

We could do with having something new on line Sunday night/Mon morning, for Europe/USA, as weekend viewing is not so good, and keeping on publishing as much as we can to keep it in the forefront. If anyone has any stories about Hans, from other parts of the world, it would be great if you could send them to me (PM me for e-mail addy) and I will publish with a link to the Fund.

marian said:
The tragedy is certainly getting attention in the UK. http://www.newsnow.co.uk/newsfeed/?name=Sailing&amp;type=ts

Let us hope that the mainstream press pick up on the Fund.
Click to expand...


Anyone have any suggestions as to how we can help bring the story to the mainstream media and its larger audience?
Click to expand...

I’m going to email the link to the webmaster at my YC and local racing series and ask them to send it to their distribution list.

ABN AMRO TWO is still heading for the Western Approaches at over 22 knots,
Click to expand...

I honored my word as well about making my donation.