George Olson, iconic boat builder and boat designer, considered by many to be the father of the Santa Cruz ULDB's, died of cancer last week at age 69.

Olson, a longtime surfer and surfboard maker in the early days of Santa Cruz ultralights, was the creator or co-creator of such designs as the Jester Dinghy, Moore 24, Olson 25, Santa Cruz 27, Olson 29, Olson 30, Olson 34, and Olson 40.

In 1969, starting out with a masthead maxed out Cal-20 plus named SOPWITH CAMEL, George Olson set out to create the longest boat for 2,000 pounds displacement he could. The result was the 24 foot GRENDEL, a 24-ft fiberglass rocketship built over a male mold. GRENDEL proved a terror on the water, winning the 1970 MORA season championship and that year's 500 mile MORA Long Distance, which finished in Ensenada.

Ron Moore rescued GRENDEL's mold from a canyon behind a burned out barn in the Santa Cruz hills, and a partnership was formed between Ron and John Moore and George Olson to create the ultimate Wednesday night race boat for Monterey Bay. By jacking GRENDEL's mold apart with 2x4's at Moore's Reef(boat shop) in Santa Cruz, a foot more beam was added and the glass and resin started flowing, ultimately creating the Moore 24 prototype, SUMMERTIME.

Wednesday nights would never be the same again. (Today, GRENDEL sits in a slip on "O"-dock, and with a casual glance, you cannot tell her dark green hull apart from a nearby Moore 24.)

George Olson's other finest design was the Olson 30, a boat he designed in 1978. On a delivery of Bill Lee's MERLIN back from her record breaking '77 Transpac , Olson came up with the idea while sailing with Denis Bassano and Don Snyder, who lent their initials to the prototype's name, the SOB 30. The resulting boat was christened PACIFIC HIGH, and was launched in 1978.

As a result of PACIFIC HIGH winning many local Santa Cruz races, Olson constructed a semi-tweaked plug for a production boat. The draft was reduced, the freeboard increased, and the teak decks of the prototype were replaced with fiberglass and gel coat non-skid. Olson and partner Ln Neale started Pacific Boats in an industrial area of Santa Cruz in 1978 to build the Olson 30, and the shop remained open until closure in 1987.

For 30 years Olson 30's have been, with the Moore 24, synonymous with the best downwind surfing ever.

Condolences to Ln, Adrian, and Christine. A memorial will likely be held sometime in the Spring.

Sail on, George. Thanks for the Memories. Those Monterey Bay swells are beckoning.

The Epicenter of the Universe

A simple rally cry for a certain good time.

God bless, and may our prayers be with his family.

Many a sailor (including me) has had many an exciting moment on an O30.

Worked for George for a short stint after college building O911s and O25s. He was a quiet, caring, understated, one of a kind person. He was also an amazing inventor and innovator, whom I admired greatly for his high quality boats that were ahead of their time.

I was always amazed at the things he designed and built, including his old restored model A truck with the electric musical bell array in the back that he used to drive in the 4th of July parade in Aptos.

Very sad to hear he has sailed into the sunset.

Sail on George! and thanks for all you contributed to the Santa Cruz community.

Home of the ULDB

As a lover and sailer of Santa Cruz ULDBs (My first 'exiting' moment was on an O30 in Santa Cruz), I say thanks to George and condolences to his family.

Had one amazing ride on an O30 around San Clemente Island in the 80's that hooked me, and still sail and love George's "stepchild" the Moore 24.

Thanks for the fun George.....

As a previous owner of an O30, I have to say "thanks George". As many of us wish him to have the wind behind him, I hope he's on a downwind sled having a great ride!

George Olson had a couple of careers. After Pacific Boats he worked in the amusement ride industry where he was awarded a patent for a Wheelchair accessible carousel vehicle. He also worked on model trains and marketed RailRax, a display rack for model trains.

He was a Great person. I met George at a Olson 30 Nationals and had a wonderful conversation with him.

Very sad to hear that. My condolences to those who loved him.

I remember one race in a 30 where we peeled the spin pole track off the mast in sections as we planed our way down Puget Sound to Pt. Wilson. We just kept repositioning the pole on what was left of the track and kept going. Greg Jackson was steering. It was a lot of fun on a great boat. I think the O-30 showed the world that ULDB's could be fast under any and all conditions.

I saw the Moore 24s for the first time at Santa Cruz a few weeks ago. very handsome lines, very photogenic boat. 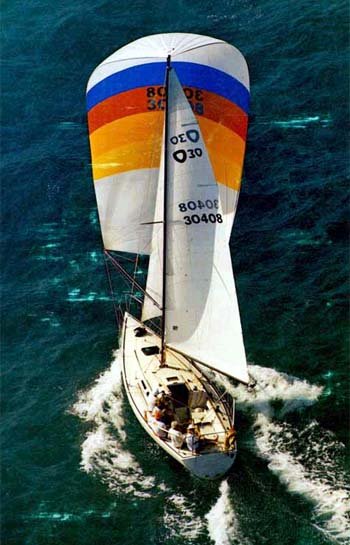 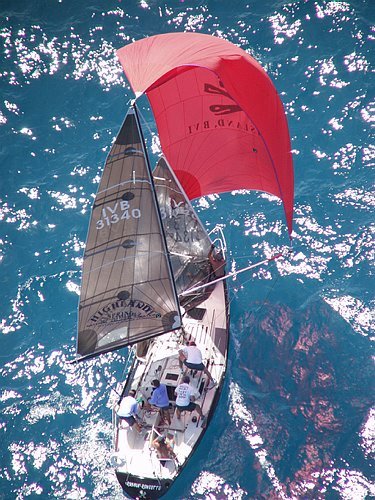 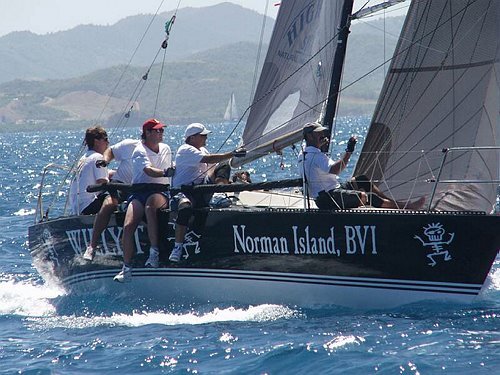 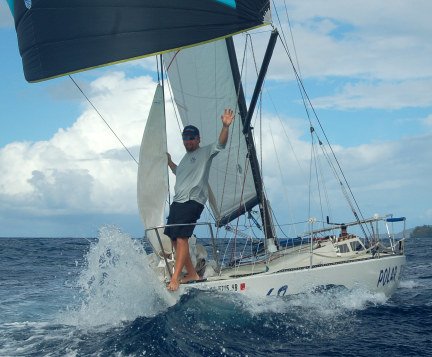 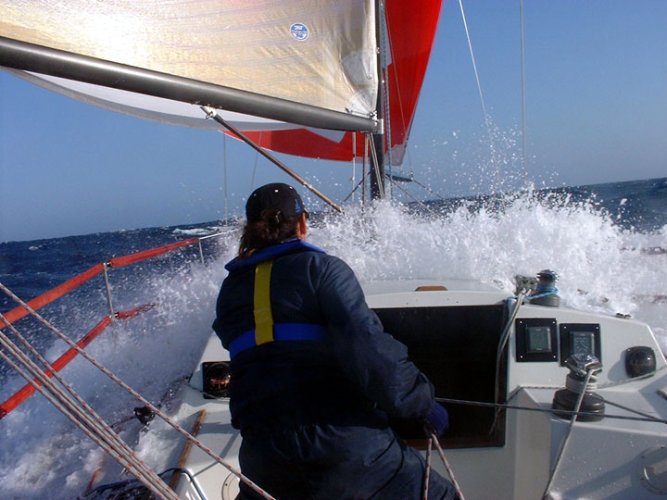 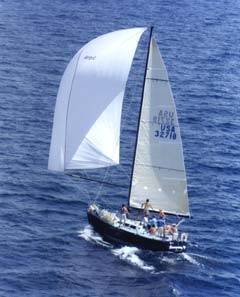 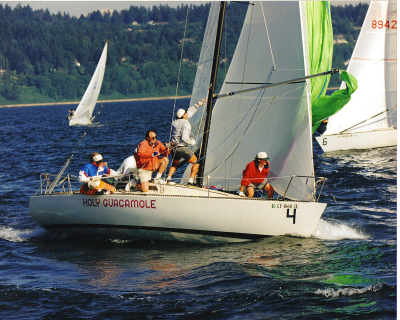 He was one hell of a nice guy and he built a fine boat. I'm proud to say I knew him and he will be missed.

supply of comedic entertainment watching the folks hoist the chutes.

I remember coming back through Race Pass on an O30, one fine Swiftsure many moons ago, and a spectacular Winter Vashon aboard an O40. Awesome boats penned by an Icon. Fair winds, George.

His boats truly helped change the way keel boat racing and cruising is played in the PNW. Olson's, Santa Cruz's and Moores have taken me on the best sleighrides of my life. The ability to sail them shorthanded on deliveries has been a joy. Sure we have torn up some kites, but not as many anymore. George Olson was an asset to our sailing community, he will be missed. I think a memorial trophy in his honor for some sunny Santa Cruz race would be appropriate.

I saw Blue Star on a Wet Wednesday 4 years ago. I was instantly hooked. "Gotta get me one of those" moments.

Still sail an O 30, I have yards of fun, still racing against Blue Star. Thanks George, for some of my best sailing rides in 46 years of sailing.

He was a super nice guy. He was quiet, brilliant, curious, and obviously pretty talented! I had the honor of helping prepare every O 30 from about 1981-1984 for delivery. Me one very sad boy.