Help me spec a new rig

Thinking we are a bit passage racey, so the inner stay is tricked up to remove or replace plus minus a minute.

Not for short up the Solent changing sails.

More like what you would do for Channel or Fastnet

How tender is the boat?  Appears to need some flesh on the rail. 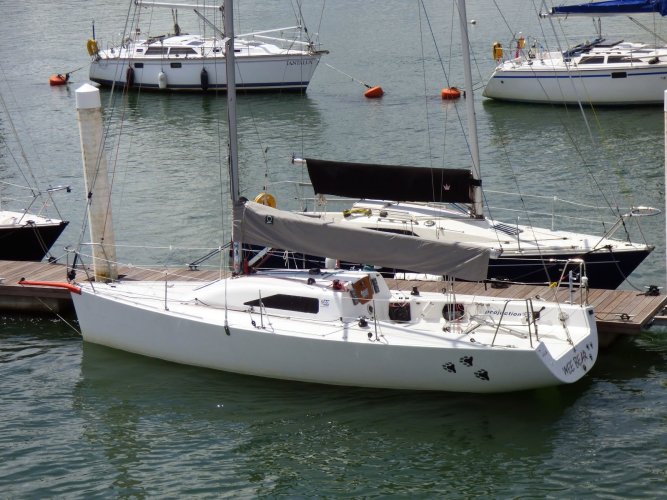 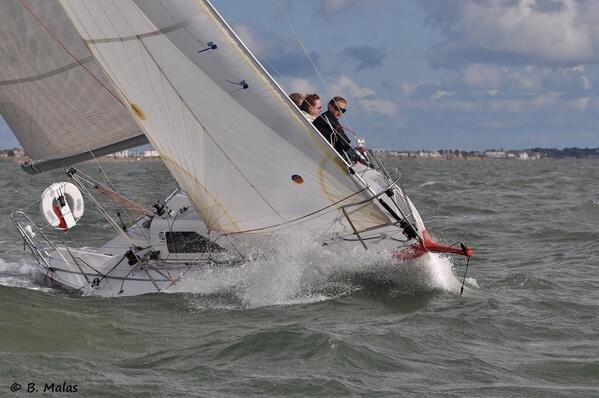 Black Jack said:
How tender is the boat?  Appears to need some flesh on the rail.
Click to expand...

Not especially. The rig is not huge for the LOA and there is a decent size L-bulb (not the modern IRC type fin). Fundamentally a cruiser / racer, not like a Farr 30.

That pic is taken with an old main; the 2016 one is smaller and optimised for SH - Norths recommended a shorter E and slightly more roach up top.

^ I found that a shorter E and increased roach top has made a difference on my 1/2 tonner. In the windy San Francisco bay, it has proven to be quite effective. This next year - we will test the new set of sails, enhanced rig and setup against faster, newer boats. It really has become more of an endurance test of the crew rather than the boat. Not getting bashed and feeling beat up means we are more likely to finish.

Having done a bit more research the carbon option is increasingly interesting. The Z-spars recommended Z351 profile weighs about 3.4 kg/m whereas the AG+ carbon equivalent is 1.9 kg/m. Back of the envelope maths suggests that's roughly equivalent to having a small person hiking on the rail (14m mast / 3m beam) before you consider any other benefits.

If you're going down the carbon route, I would check with Axxon, they are rigging a lot of boats at the RORC and are sensibly cheaper than the others.

The only thing about carbon on an older boat is that it's stiffer and you need to have stiffer sails and reinforce rigging points as well as other bits other bits. One Aphrodite 101 picked a carbon mast and added 26 meters of reinforcement in a 33 footer as it was bending a lot more....

Snowden said:
Having done a bit more research the carbon option is increasingly interesting. The Z-spars recommended Z351 profile weighs about 3.4 kg/m whereas the AG+ carbon equivalent is 1.9 kg/m. Back of the envelope maths suggests that's roughly equivalent to having a small person hiking on the rail (14m mast / 3m beam) before you consider any other benefits.

you have a similar P to me.  check out the Young 88 alu tubes.

Snowden said:
Having done a bit more research the carbon option is increasingly interesting. The Z-spars recommended Z351 profile weighs about 3.4 kg/m whereas the AG+ carbon equivalent is 1.9 kg/m. Back of the envelope maths suggests that's roughly equivalent to having a small person hiking on the rail (14m mast / 3m beam) before you consider any other benefits.

Going carbon is nice if you can afford it.  Would love to replace my Z351 with a carbon section.  I did a lot of pricing and $28,000 ready to install was the lowest I could find, and lowest is rarely the best.

Yeah, I guess my perspective is if I’m installing a new stick then the actual tube itself is only a % of the total cost.

Snowden said:
Wanted to canvas opinions on a reasonably big decision I have to make soon and there are usually clued up people on this board.

Boat is a 1997 Projection 920 (similar to a J/92s I suppose?), 30ft with frac rig and bowsprit for asym kites. Predominantly used for 1H/2H inshore and cat 3 offshore racing.

I had the rig craned out this year for an inspection given that the standing rigging is about 10 years old. The rigger has effectively condemned it and looking at it I am not surprised. Previous owners have variously (i) added a masthead spin halyard, (ii) filled the inside lower quarter with foam (keel stepped, stopping leaks), (iii) drilled drainage holes and (iv) added a load of heavy brackets at the masthead. At some point the chainplates were moved 30cm aft, allowing swept spreaders to be fitted and a swap to non-overlapping jibs.

Would appreciate thoughts on a couple of key decisions which are all variants of the ratings vs performance vs cost equation. Planning to buy new main and jibs (replacing 2016 Nordac).


All the above in context of a reasonable budget for a 20+ year old boat targeting mid-fleet Solent performance on a good day.

Attaching some pics showing the as designed chainplate location and the current setup.

Make sure you can use a staysail,  when reaching and broad reaching,  to ventilate the lee side of the main

Staysail tack on centerline and tack to windward

a leeward reaching  strut to get the Genoa leed , leech tension,  right when off wind

Leeward spreader roots take beating on aft swept rigs when running hard downwind , be sure they are up to the task

run a permanent boom preventer.. from mainsheet boom blocks , along boom , then down the vang and back to cabinnwinch  ...this preventer is valuable when close reaching because it removes leech tension from the vang

broken goosenecks and vang attachments from overloading are all to common

Just a quick Christmas update to say that I checked under the tree this morning and there was a nice new carbon stick for the boat there. Thanks for all input on this thread

She’s also getting a bit of love underwater (new rudder bearings, sanding back 24 years of antifoul, durepox, keel alignment) so the only excuse for lack of results next year will be my sailing abilities!

will post pics of the process if any interest. 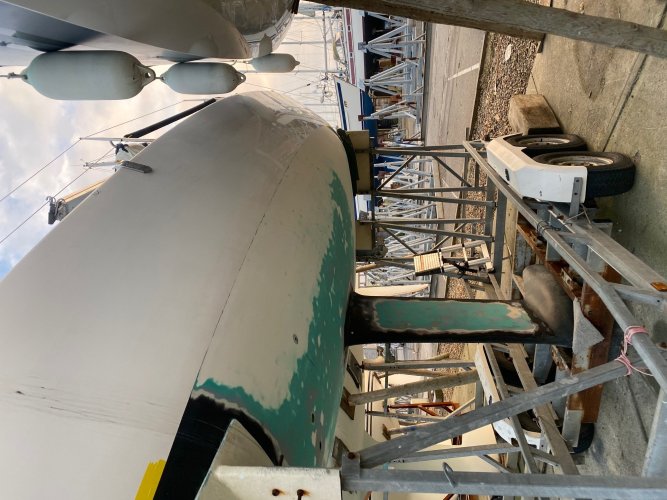 not sure why it’s sideways but here is the hull after a good deal of sanding. Green is some kind of barrier coat and you can see some grey and several layers of hempel hard racing black antifoul. Thanks to Tim at Race Yacht Services for doing the hard work.

Green &amp; Grey will be most likely be Gelshield. Shame to sand though it.

Just wondering how a keel alignment works? Are you talking fore &amp; aft, or side to side? My keel bolts are pretty snug so I don't know how much 'adjustability' a keel should have.
Make sure to post pics of the new stick.

MiddayGun said:
Green &amp; Grey will be most likely be Gelshield. Shame to sand though it.
Just wondering how a keel alignment works?
Click to expand...

It is most likely Gelshield - given the age though we are taking it all the way back (almost 30 kgs off). Boat is dry sailed so will have durepox and no AF.

To align the keel (and rudder, saildrive and rig) you first get the lasers out. Then it is a process of conforming the mating surfaces and scraping out old bedding compound such that it lands in the right place when you tighten the bolts. Saildrive you can shift the engine around on its mounts if need be 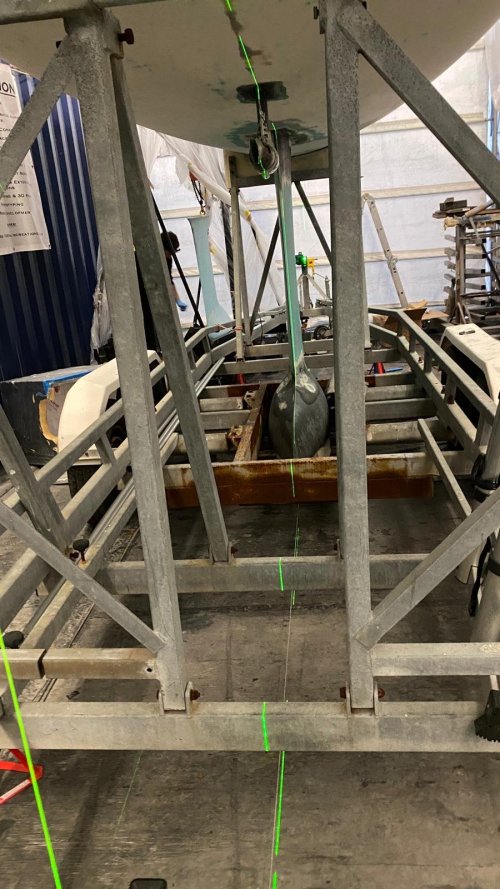 Interesting process.
I think my MGC could definitely do with this treatment, she's much sharper on port tack than starboard, but its obvious even from the rudder position.

Yes - I had also noticed a bit of that, though it was partly due to the rig issues upthread.

The other advantages of having the keel off are to take a good look at the bolts and hull structure as well as to weigh it to help with the IRC bulb weight field and get an Rm calc for the new rig. My certificate says ‘default’ at the moment which I suspect is penalising the rating.
All the 920s (there are 3-4) had keels changed after launch in the CHS/IRC crossover.

Snowden said:
btw extra internet points for those that figured out why the AF hasn’t come off the keel yet
Click to expand...

So as not to blow the faired profile away? I actually don't know.

I'd thought of dropping mine to take a good look at the studs, but since its lead then they're no doubt J bolts cast in place, I can't really inspect past what's poking out.
I'm interested to find out how far off square your keel / rudder are. What do they use a reference point?