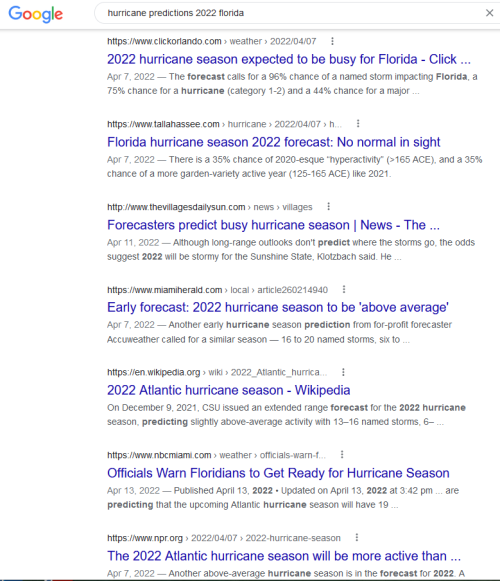 Jules, you've been here longer than I have... But, it seems EVERY hurricane season is always above average.  Then again...  it only takes one.

As a member in good standing in Curmudgeons Local #42, I freakin' hate the Weather Channel for over hyping every heavy dew as the next 40 Day Flood.   And Get Ed Off My Lawn!

I never take a hurricane for granted. I've seen many, and I don't like them. One thing is.... They generally let you know they're on the way, unlike tornadoes, and earth quakes.

It going to be same shit different day. The state needs a good blow job.

Mrleft8 said:
I never take a hurricane for granted. I've seen many, and I don't like them. One thing is.... They generally let you know they're on the way, unlike tornadoes, and earth quakes.
Click to expand...

Tornadoes were bad. You only knew when they could appear. So, for 6 months you had to be constantly looking over your shoulder. And the 2 AM Tornado Warnings were the worst: gather up the cats, dogs, and... oh yeah, the wife, and totter on down to the tornado hole... a couple of night of that shiite does you no good.

Hurricanes are a game of Forecasting, Probabilities and Risk Management. Couple of years ago, we had the Cat 5 Dorian beating the absolute crap out of the Bahamas. The guessers forecast it to come ashore in Florida -- right over my pointy lil' head. I ain't fighting a Cat 5 Superstorm, and the risk to the family was was unacceptable. We packed up the SUV and bravely ran away to Alabama. Cost us a couple thou to take a five day vacation and eliminate the possibility of getting snuffed. Basic Cost/ Benefit analysis. In the end, the bastard thankfully turned north, sparing mainland 'Murica.

Problem with being in SFL, they can go from a tropical wave to tropical storm to Holy Shit it is Hurricane on our doorstep in very short order. To make life even more interesting this season, there is guy with a 45' metal boat, that can't anchor for shit, that put his boat in my local hurricane hole after the last time he dragged anchor.

Charlie Foxtrot said:
Jules, you've been here longer than I have... But, it seems EVERY hurricane season is always above average.  Then again...  it only takes one.
Click to expand...

Some time this month, I'll replace the fuel in my generators, work on the one with carb problems, fix the leak on the other one, and put in fresh (non-ethanol) fuel. I run them once a month year 'round. I'm also making an effort to remove things that might become projectiles. Those accumulate during winter. The chainsaws just got worked on. I'm ready to stay and always ready to go. I'll never sit through another major one if I have a working car.

But curricanes aren't all horror. The ones that miss, but not by much, are great fun! They suck up all the moisture for hundreds of miles, leaving only lots of wind and warm water.

There was a guy named Tom Scott who used to come here. One of Jules' neighbors. Here's how he and I react to a nearby hurricane.

June too soon…
July stand by,
August come she must…
September remember,
October all over.

The hurricane snip is at the bottom of the article...

No biggy, Flawrida still has 2 active insurance companies that will insure homeowners. The smart money has already left town, so if you still have homeowners insurance I wouldn't necessarily expect great service from your carrier if you get hit hard.

If I read correctly, the Governor is gonna magically solve that problem today or tomorrow by saying some words and all your hurricane insurance worries will evaporate.

The roof coming off my late office during Charley.

I was a homeowner insurance agent.  Had to tell 1 widow, 2 families and a 9 foot tall tattooed skin head that their premium was not paid.

A month in a tent in the parking lot, 1 year on MIL's front porch until the office space got repaired.

Charlie Foxtrot said:
Jules, you've been here longer than I have... But, it seems EVERY hurricane season is always above average.  Then again...  it only takes one.

As a member in good standing in Curmudgeons Local #42, I freakin' hate the Weather Channel for over hyping every heavy dew as the next 40 Day Flood.   And Get Ed Off My Lawn!
Click to expand...

Yeah, I know, hype = profit.  Last year they said pretty much the same thing.  Though it was a fairly active season, Florida got a reprieve.

The only hurricane that hit us after we moved here is Irma.  The hype was everywhere.  Tidal surge 6-9 feet above street level?  The reality was tidal surge went the other way and the canals were almost dry.

As for TWC, it was founded by a Chicago weatherman named John Coleman.   We'd watch him for the entertainment value but he wasn't very reliable.  Chicagoans  typically take the weather as it comes.  It's only the occasional tornado that gets our ears perked.  But that didn't stop Coleman from hyping everything and his ratings for quite a while were pretty solid.  Then we tired of him.

At 8 in the morning, Charley was going to Tampa.  A couple of hours later, he hung a right and came right up the harbor.

It was more truthful when they were only named after women.

Fat Point Jack said:
At 8 in the morning, Charley was going to Tampa.
Click to expand...

As I recall, it was just after 8 that I first noticed the turn toward us and instantly decided to leave.

Weirdly, my little stilt house, built in Port Charlotte in 1931 and moved here in the 80's, was basically undamaged. We could have stayed. I was in a concrete house for Andrew. It was loud like standing next to a train. I can't imagine what kinds of noises a little wooden house on stilts makes in a storm like Charlie.

We keep dodging bullets here. Isabel had the hurricane winds and floods separated by a good few hours. I was stern to the wind and at one point the companionway boards were bowing inwards , but I missed the flood rolling in because the wind had dropped off and I was sound asleep.  I woke up to the dock being about 3-4 feet underwater.

I can't imagine how destructive both things at the same time would have been.

Folks got their house totaled during Katrina, insurance paid off but it was somehow paid via the parish gov't because it came from emergency funds. Being lousyiana they tried to keep it until my folks lawyer showed up with a picture from the local paper showing the promo check with a memo section showing it was for my folks address. Interestingly he had his law school buddy from the federal prosecutor's office with him. I love Louisiana deeply but their concept of keeping white collar criminals custody via public office needs to be revisited. I was lucky to convince them to leave before Katrina. My first hurricane was Camille and the last one I had to deal with was Katrina, every one that hit the Mississippi/Louisiana border near Bay Waveland/Slidell from Camille in 1969 until the mid 80's we rode out. I even got a bonus hurricane at school in Mobile with Frederick.

My most vivid memory is how clear and beautiful the day before a storm and the day after was. Though the days after tended to have less air conditioning than the days before. Also my dad and the other dads blocking the entrance to our neighborhood with shotguns because the  people wanting to see the damage were making wakes with their cars that were topping the foundations of some of the houses. Ours was on piers and didn't ever flood.  The separate garage was on a small hill purpose built to get it up, but it still got water. It was unfinished with only peg board on walls 2 feet up off the floor with every fifth brick or so missing in the first course so water could drain out. I remember that yard would be under water for days as the state drained from the storms. Even heavy rains from ones hitting Florida or Texas would flood our neighborhood.

Jules said:
The only hurricane that hit us after we moved here is Irma.
Click to expand...

Ya, Irma.  That beyatch greeted us three weeks after we completed the move here to Rancho de la Foxtrot.  The wifey was NOT AMUSED.

Everything I owned - all my tools - were somewhere in 200 incorrectly labeled cardboard boxes.  Fortunately, several neighbors took this Lotus Eater from LA LA Land under their wings; providing desperately needed advice, tools and PLYWOOD. Charlotte and I finished our preps, including the new plywood shutters, about 5 hours before the Cat 3 'cane whizzed by. Thankfully for us on the East Coast, she petulantly didn't make the expected right turn (NO! - Your OTHER Right!!!) and came up Western Florida.

Winds gusted to 100 mph near here. My flat-thumb engineering held and we just lost a panel or two from our screen room. All in all a pretty good dress rehearsal.

Six days without power was no picnic - but, I restored an ancient generator the prior owners abandoned, and we had partial power. No A/C though -- NOT AMUSED I tells yah.  But we did have HOT showers. (What a luxury!)

Now, we have a Miami Dade steel roof and Hurricane windows.

the power company has been cutting back trees in earnest since November.

I sure hope they are not taunting Mother Nature cause that bitch plays for keeps..

and just to be sure added 1/2'' ss 1x19 cables over the roof to the ground slab ether the whole CBS home flys WITH THE GROUND SLAB! [unlikely] or the roof stays with 23k lbs rated cables holding it in place plus the hurricane clips ect cost was double the materials under 2000 sq ft over 25k with cheap labor [neighbors and friends ] and lots of doing it my self also plus hunting for deals NO CONTRACTOR WOULD BID IT MY WAY

Now we've been 40-plus years in New Orleans, beaucoup storms when El Nino warms up the Gulf.  Occasionally fewer storms when it was La Nina.  We were all Katrina refugees, and the flooding came not from the river or the earthen levees on Lake Pontchartrain, but from the drainage canals, whose walls failed.  The redesign and the barrier walls to the east, made Ida a non-flood event in the City.  But not farther upriver where they got the eye, and little in the way of storm flood barriers.

The last week of August, and first two weeks of September, are crunch time down here, we all bite our nails.  Katrina was last day of August. So was Ida.  Earlier storms seem lately to aim at us a week out, then go east or west for landfall.  But not all of them, Ida was a Force 2 in town, but 3 and 4 as you go upriver and southwest into Lafourche.