Not actually an anarchist.

I think that means that the boats are now built by Quarter Moon rather than by LPE.

Yes, indeed. GB-OQT belongs to Laserperformance LLC, an american company as far as I know.... Thought there was no production in USA?

jgh66 said:
No, that's not biased. I was just wondering that they mentioned a chinese facility in their Anti Trust document, but not in their FB comment.

I've seen that the 2019 boats had a different HIN (GB-OQT...) than the older boats (GB-PSE...), so I was wondering if they had moved production completely  to china. As you said, such a move often leads to some quality problems, so buying a 2019 ex charter boat for my son could lead to trouble. Might be better to look for an older boat, or one from PSA than. Somebody also had posted infos on PSE, in which it was said that they only have one employee, who has an adress in the USA. I'm just asking if somebody has infos on what's going on in the UK. I just don't really trust boat building companies that are not run by sailers, but some "money guys", and would prefer to be able to buy a boat from a builder I trust. So I am generally standing behind ILCA and WS in respect to going from SMOD to MMOD.

On the termination of LPE: I really don't stand behind them. I believe these are the wrong people to build an olympic class boat. But the termination of LPE as a builder in the beginning of the season, with new charter boats needed for some big events and for sailers just one year before the olympics.....I can really understand that my fellow euro sailers were more than pissed about that. There should have been alternative builders ready to supply boats which is nearly impossible at the beginning of the season, and the current trademark situation. If LPE has refused to allow inspections since 2015 ILCA could have done that just after the sales period, let's say in june 2018, and with some kind of strategy to be able to legally install new builders in short time. So first a members vote on the name change, than new builders, and finally the termination would have been good. An olympic class without a builder is even worse than an olympic class with a bad builder.
Click to expand...

You think IPL is biased and this ain’t. Uh... wow!! Look in the mirror. Dang.


sosoomii said:
Not the most conciliatory of messages from ILCA. Did they not get @Gouvernail‘s team spirit memo?
Click to expand...

Ah damn. Geeze. Good grief these two parties clearly hate each other. I don’t get it. They both are so freaking stupid. LPE falls for the taunting and gets terminated. ILCA can’t stop pouring gas on a fire and maybe win votes from European members by STFU and say the right things??

As to the 2019 boats with OQT hull IDs, do they have "Made in the UK" stickers on them?

As far as I can remember no

Why? I don't say that terminating LPE was completely wrong. Just wrong time and preparation. If LPE has refused Inspections, and this is against the current contracts ILCA has the right to terminate. That's ok. But you have to insure that the game can go on.....

Pic today of a brand new Laser in our warehouse. 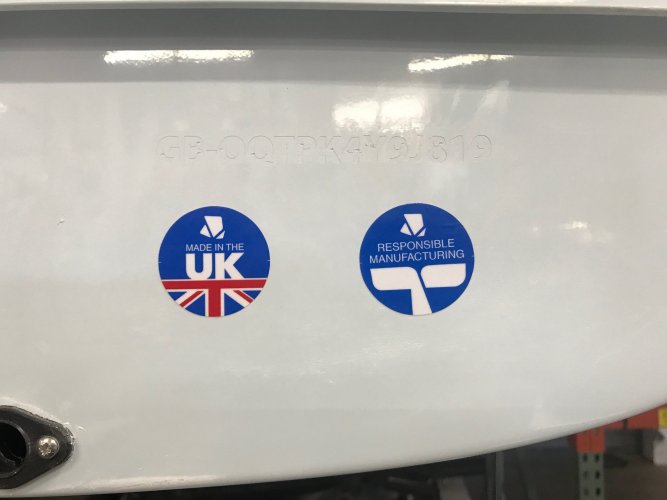 jgh66 said:
Yes, indeed. GB-OQT belongs to Laserperformance LLC, an american company as far as I know.... Thought there was no production in USA?
Click to expand...

Correct. The factory in Rhode Island that used to build Lasers and Sunfish shut down a few years ago.

WestCoast said:
Pic today of a brand new Laser in our warehouse.

Ok, do you know why they use a different HIN now?

By the way - new Lasers in USA? With or without plaque?

Gosh dang it how did things get so broke with ILCA that they ain’t doing this. Holy....  :angry:

Starting to wonder if I was very wrong about all this.

Wess said:
Gosh dang it how did things get so broke with ILCA that they ain’t doing this. Holy....  :angry:

Starting to wonder if I was very wrong about all this.
Click to expand...

PS: Maybe I am naïve, but, based on the ILCA FB post,  it looks like there has been some progress

So. It's over? Yay! Improbability drive reports normality is slowly bring restored.

I think the first two letters of an HIN are the country of manufacture.

I was surprised that Bill Crane and Rastegar were on the same phone call. Bill Crane resigned from LP over a month ago.

EYESAILOR said:
I think the first two letters of an HIN are the country of manufacture.

I was surprised that Bill Crane and Rastegar were on the same phone call. Bill Crane resigned from LP over a month ago.
Click to expand...

just because he resigned does not mean there was animosity

EYESAILOR said:
I think the first two letters of an HIN are the country of manufacture.
Click to expand...

Nope. The three letters started  as initials and as those ran out others were used
Click to expand...

According to european recreational craft directive 2013/53/EU it means the following:

GB : country of manufacturer. Does not mean that the product or all of it´s parts are made in that country, A manufacturer can produce hulls in china and use a british code.

Interesting, vote is now out http://www.laserinternational.org/blog/2019/07/01/voting-now-open-for-proposed-2019-ilca-rule-change/?preview=true&amp;_thumbnail_id=1986&amp;fbclid=IwAR0ChVzse5vCCe1vb8ZlTcDesmjuEn-qmzCzgjluZuyF8e6jtz8pXjIqQ5w despite reaching a trademark agreement with LPE.

The current trademark agreement must be enough to meet World Sailing's deadline since ILCA haven't given themselves any time to count the vote/verify voters before the 1st August deadline.

In other words, ILCA must be confident in the builders coming to an agreement in the next month, or World Sailing extending the deadline.

Why would you think a trade mark agreement has anything to do with all the current builders agreeing to WS FRAND policy?

Not actually an anarchist.

Gouvernail said:
I am extremely disappointed our Class officers have decided to entirely skip steps 1, 2, 3, and 5.
Click to expand...

Surely that was to be expected, as the same process was followed for the fundamental rule change that kept LP in the game. In both cases a member led class would have followed something akin to what you have outlined, but we do need to remind ourselves that over most of its history the Laser Class has been adequately managed and far more successful than any member led class. The public governance brings its own problems. I have the mental scars to prove it.

Laser Sailors please vote, it is very simple, you heard it from me, your current trademark owners/builders are not going to agree to terms that World Sailing are looking for and the only way to allow this great class to move forward and remain Olympic is to vote Yes.

I will not agree to a licence fee for a name that will increase the price of the boat and parts.
Click to expand...