Yesterday was another good day with the cryocooler release, momentum flap flipping into position, and getting the folded sunshield uncovered. Today we’ll extend the midbooms which are the sunshield spreader bars that stick out on either side of the spacecraft. A few words on each of these…

The science instruments are on the back side of the telescope and the entire assembly (mirrors, structure, instruments, etc.) will passively cool down to about 40 K  (-390 F) because they will be shaded from the sun and facing deep space. This allows them to see infrared light because you can’t be glowing in the same wavelength region that you are trying to see. No heat = no glow, so cold is good. However, in some cases we want to see things that can’t be easily seen even at 40K so one of the instruments uses a refrigerator to active cool it down to 7 K (-450 F). That refrigerator is called the cyrogenic cooler, or cryocooler, or just cooler depending upon your mood at the time. Running the cooler takes a lot of power to run compressors which generates a lot of heat. Because of that the refrigerator part of the system is down on the spacecraft bus on the hot side of the vehicle. The cold gas is then transported through long slinky like pipes up along the DTA, which we extended a couple of days ago, to the cold side of the spacecraft where they are connected to the MIRI instrument. The cold gas cause this one particular instrument to get extra cold. The heavy cryocooler compressor assembly had to be restrained to the spacecraft structure for launch, but we want it mechanically isolated from everything else during operation so vibrations that it produces don’t shake the cameras. Yesterday we blew the launch restraints allowing it hang free to get that isolation.

The momentum flap is just a rectangle that is now fixed in its permanent position. It better balances the profile as seen from the sun to minimize the effects of solar wind causing the spacecraft to torque. Any torque imparted onto the vehicle by solar pressure has to be cancelled out by the Attitude Control System (ACS) which causes us to expend fuel. Less fuel = less mission life = bad.

As mentioned yesterday, the sunshield layers are carefully folded and stored for launch on the large UPS arms that we dropped a few days back. Yesterday the launch covers were rolled back to expose the sunshield so the spacecraft is now in the pictured configuration. Today the Midbooms will be extended. They along with the ends of UPS pallets (the things the sunshield is currently sitting on) form the corners of the diamond shaped sunshield. If things continue to go according to plan we’ll start unfolding and stretching the first sunshield layer tomorrow. I’ll discuss that after NASA announces it.

Keep in mind that everything I put out here is just the baseline plan. We discuss the plan daily and things can change even if there is nothing wrong. A couple days back it was even considered to take a day just to let people catch up on administrative tasks on their systems now that we’re seeing things in flight for the first time. We pressed on because everyone seemed comfortable with their progress. So stay tuned… monitor NASAWebb on Twitter…and enjoy the mission. 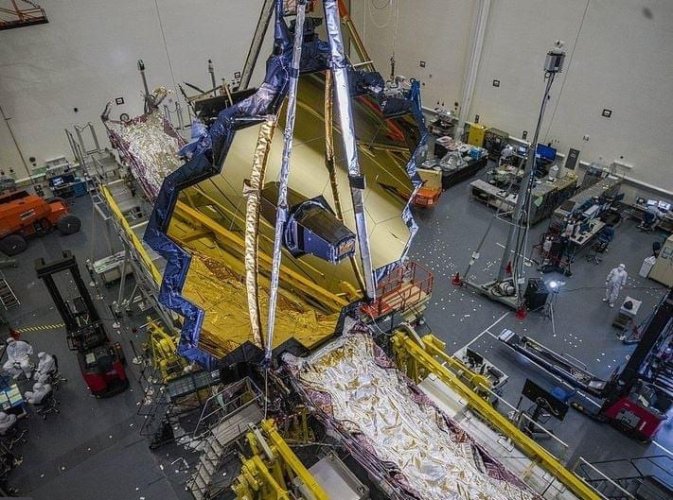 Thank you for the insight,  This whole project is amazing.

sailm8 said:
Thank you for the insight,  This whole project is amazing.
Click to expand...

Certainly.  He said he'll be sharing posts on a daily basis, after NASA clears the info for release.  I'll pass them along.

This is a short one today. Yesterday the midbooms (arms sticking out on either side) were successfully deployed meaning all four corners of the sunshield assembly are in place and the five layers of sunshield material are loosely pulled out into a diamond. Today we will start the process of separating and tensioning the layers. This is a long, careful process that is expected to take a couple of days. So exciting stuff but not much to discuss. Hopefully the next update will simply state that all five layers are in place with proper tension on them. 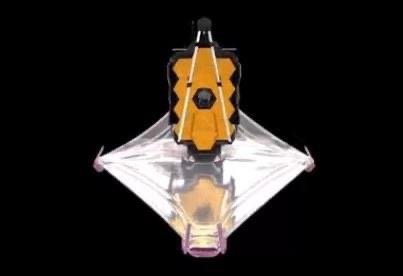 I really appreciate you posting your friend's updates here. 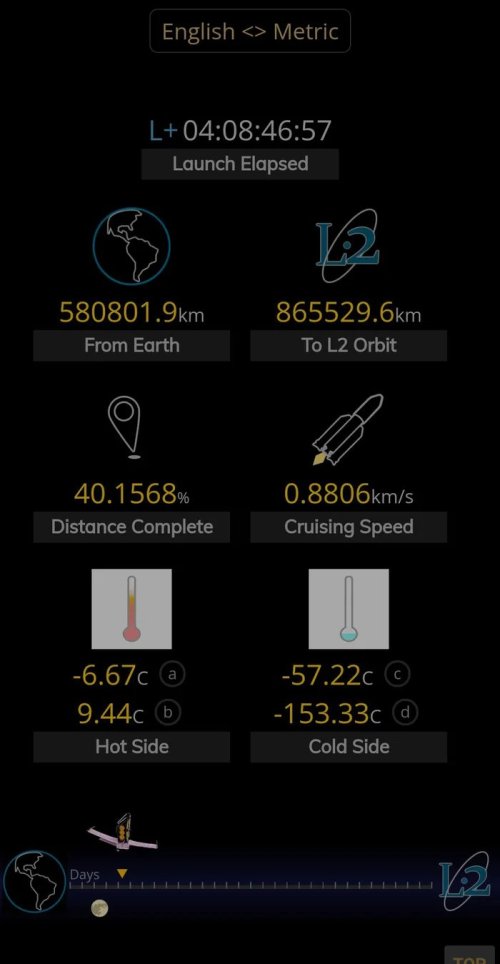 A couple of days ago I’d hoped to be posting today that the sunshield was tensioned and in the final flight position. Instead I’m posting that today we are just starting to work on the first sunshield layer which is a huge milestone and exciting to see develop. In the meantime, during the past couple of days we paused to understand some items that have evolved on orbit including optimizing the power system (was okay but is now great) and orienting the spacecraft to improve the thermal profile to favor sunshield tensioning (also worked out well). Commissioning continues to proceed and hopefully in a couple of days I can report that the sunshield work is complete. Stay tuned…any enjoy the ride

On December 28, the observatory began the process of opening up its diamond-shaped sunshield, releasing the cover protecting the sunshield two days later, and on Friday successfully rolled out the five-layer sunshield. The silver shield is 69.5 feet long and 46.5 feet wide when fully deployed, and unfurling it included 140 release mechanisms, 70 hinge assemblies, 400 pulleys, 90 cables, and eight deployment motors, all orchestrated as the observatory flies 930,000 miles to its destination.

All of those need to work perfectly - the first time. Whew. 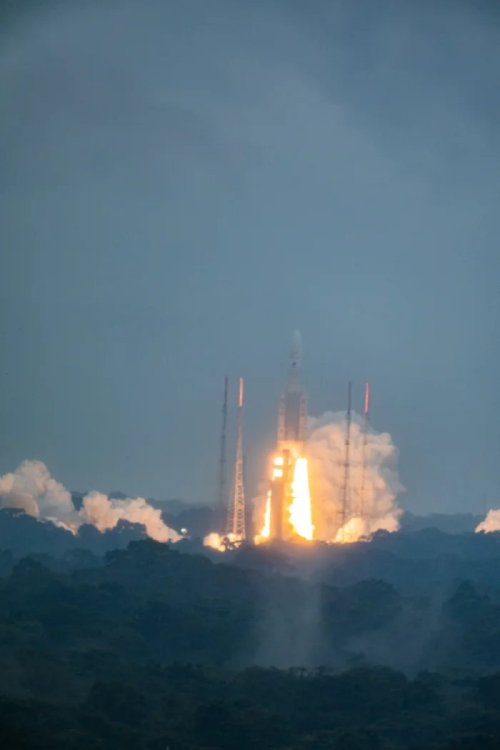 Yesterday was both historic and boring… a perfect combination. Three of five sunshield layers are complete without as much as a hiccup and the vehicle is really starting to look like the animation videos we’ve been watching for years. Today we are planning to complete layers 4 and 5. Time permitting we’ll move onto the DRSA-V and STSA deployments with cryocooler power on a stretch goal.

The Deployable Radiator Shade Assemblies Vertical (DRSA-V, pronounced Der-suh-vee) are thermal shades that stick out on the front of the spacecraft bus (the cube on the bottom of the vehicle) on either side. Once deployed they will expose the Star Trackers radiators to space, as well as providing shade to those radiators. The star trackers are used to precisely determine how the spacecraft is pointed and it is important to cool them properly.

The STar Tracker Assembly (STSA) is the mount for the star trackers. It has a bracket that provided extra strength during launch that will be released from the assembly to minimize spacecraft bus vibrations from shaking the trackers in normal flight.

The cryocooler was outlined in a post a few days ago.

Stay tuned… and enjoy the ride

While I like the collaboration between the USA, Canada and the EU on this thing, hopefully it is the last time we launch one of these behemoths for a while.

The real opportunity now is in interferometry with wide-spectrum light sensors in a fleet of tiny, cheap satellites and then park the whole array somewhere far beyond the orbit of the Moon.

We would be able to see far greater detail with an interferometer like this than a fancy orbiting telescope. An array of sensors can shit all over a single expensive point source ...

While we wait for new tech, for the cost of one carrier, I don’t mind keeping a generation of space engineers gainfully employed developing needed knowledge for the next steps in space.

The STar Tracker Assembly (STSA) is the mount for the star trackers. It has a bracket that provided extra strength during launch that will be released from the assembly to minimize spacecraft bus vibrations from shaking the trackers in normal flight.


One thing has me puzzled…….not hard to puzzle an old fireman…….why would there be “vibrations” during flight? How would something moving through a “vacuum” develop vibrations from something attached to it? Wouldn’t that require some external force acting on it?

There are active coolers and other systems on board.

IStream said:
There are active coolers and other systems on board.
Click to expand...

So………a on board system of some sort while running/working might cause vibrations which would be amplified by an attached item on some extended arm? I can see that…….

Solar heating and temperature differentials cause expansion and contraction. And waste heat from electronics can cause temperature swings.

Shouldn't this be in the TrailCam thread

mikewof said:
The real opportunity now is in interferometry with wide-spectrum light sensors in a fleet of tiny, cheap satellites and then park the whole array somewhere far beyond the orbit of the Moon.

We would be able to see far greater detail with an interferometer like this than a fancy orbiting telescope. An array of sensors can shit all over a single expensive point source ...
Click to expand...

In some ways, yes.  I've been involved with the Allen Telescope Array at Hat Creek, and an array of small dish antennas does have many advantages over a large antenna.  Advantages include cost (of course), wider field of view, better angular resolution, multi-beam capability (using phased array techniques), and others.  But the big antennas (and mirrors) still have an advantage when it comes to noise floor, which limits the ability to detect remote and weak sources.

Chris has been posting info as soon as it is cleared by NASA.  This just popped up -


I guess I can comment since it is being broadcast live...

The Webb sunshield is fully deployed.

It's hard to put into a few words how much effort went into making this first of a kind shield structure in space a reality. Ask me over a beer and I'll give you the rundown.

He describes his role in the mission -

I manage the flight systems team that is responsible for all on-board systems for the life of the mission. Prior to launch I worked on the NIRCam instrument and MIRI cyrocooler. During this early part of commissioning I'm an Anomaly Coordinator (ANCO) where I help subsystem teams work through troubleshooting during problems. Think troubleshooting secretary and you've got the idea.