She posted this morning. Blog Nereida

What an amazing welcome! ...  from people on so many boats nearby keeping us ('Nereida' and me!) company and from people on the Ogden Pt breakwater, many of whom had been waiting since mid-morning.   When we neared the harbour, the Fire Boat came out and gave a magnificent water display from its hoses - three streams of water formed a moving curtain of water, and the boat itself seemed often to spin on  the spot - a real pleasure to watch - thanks for a wonderful display!    Later, there was a big welcome on shore after we finally managed to drift  across the finish line, despite almost no wind - with occasional short-lived gusts having frequently given a false impression that the wind was getting stronger.

The day  before had seen a beautiful sail in good wind and bright sunshine down the Juan de Fuca Strait towards Race Rock - with the mountains of Vancouver Island to the N and those of Washington State to the S.   The wind had died again by the time Sooke was reached, so the night was spent drifting - but in company with Bob on 'Duet', who had come out to meet 'Nereida' and stayed nearby all night.  'Duet' left us soon after dawn, by which time I'd managed to get just two hours' sleep and was now trying to round Race Rock in a wind that had teasingly strengthened a little, before heading towards Victoria Harbour, visible in the distance - this time with John and Marj on 'Sauterelle' for company - but in increasingly light wind.

More boats came along to welcome us as the day progressed - it was lovely to see so many familiar faces after so long away.  But the wind was determinedly light and mostly from almost dead astern, making it difficult getting to the line.  I seemed to be gybing the mainsail again and again...  But eventually, just before 5pm, the wind came up a touch more and we were able to get closer and closer - finally crossing to a cacophony of horns and cheering ...

I couldn't stop smiling and was delighted to see so many lining the harbour walls and docks .....  Thank you all so much for waiting around for so long and giving us such a wonderful welcome back!"

It looks even better as a glossy 4-page spread in the paper copy of the magazine.

Foolish said:
Great idea. I'll suggest it to her.  It would make the hardcover version of her book all that much more valuable.
Click to expand...

Have a limited special edition of her book with the hardcover laminated with a piece of that jib! That would be a fine memento.

Have a limited special edition of her book with the hardcover laminated with a piece of that jib! That would be a fine memento.
Click to expand...

I've already discussed this with her.  She mentioned that Jessica Watson actually sold parts of her sails as a way to raise funds.  Lots of good ideas out there.

They've just mounted a bronze plaque on the Wall of History, in the Victoria inner harbour, just across from the Provincial Legislature.  This is just above the walkway where several months ago they named a dock in her honour.   Jeannis was on a multi-city speaking tour in Australia when the pandemic hit.  So she's stuck down there, hoping to fly back to Victoria and sail away to the South Pacific. 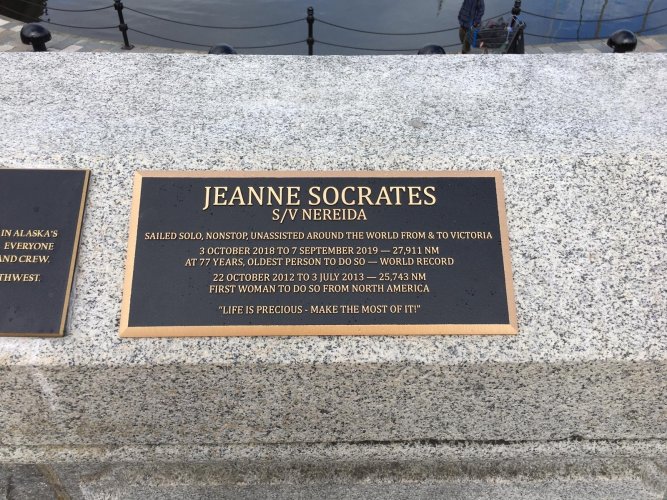 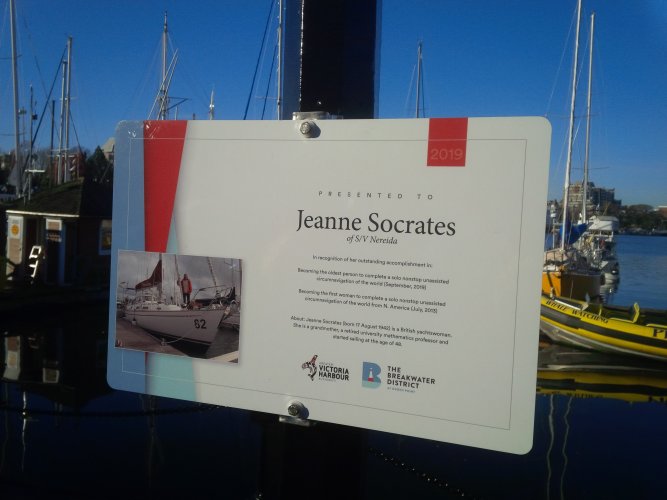 I don't think she held the record even as long as her trip took.

Yes, she is a fellow CCA'er and I am humbled by her accomplishments.  Good on the recognition she so rightfully deserves.

I don't think she held the record even as long as her trip took.
Click to expand...

There was a story quite recently about a guy in his 80's who did it since Jeannie.

I notice Google still says it's her.

Panoramix said:
Who is said "old guy"?
Click to expand...

Webb never did it non-stop.

He holds the title for "Craziest Fucker To Circumnavigate"

IIRC it was a Japanese geezer - the story was very recent.

Damn, I got to wait a few years yet to have a go at that record.

I don't think she held the record even as long as her trip took."

Thanks to so many of you for all your amazing support!

I'm pleased to say that I still hold the record as the oldest person to sail solo nonstop unassisted around the world VIA THE FIVE GREAT CAPES - Bill Hatfield only rounded three of them - he didn't sail S of Tasmania or NZ....

SloopJonB said:
Webb never did it non-stop.
Click to expand...

Perhaps to his eternal frustration.

Webb sailed for Webb and not for records or anyone else's approval.  I'm not dissing Jean, I'm just saying that his motivation was different.