I'm not sure if this is the right place for it, but here goes:

He started his boatbuilding career in 1962, building the Sparkman &amp; Stephens Designed 24' Dolphin in a yard owned by Joe Cummings near Marina Del Rey, California. The first boat was our family's, named Yankee. He built 3 more at that yard. The construction of those first 4 boats was fiberglass, but the deck, cabin trunk and all interior furnishings were wood. The masts were hollow laminated spruce. He and my mother decided to name the company Yankee Yachts, and moved it to an old steel building on Hindry Avenue in Inglewood, California in the mid 1960s. Subsequent Yankee Dolphins were build with fiberglass decks. While at the Inglewood plant, he commissioned S&amp;S to design a 30 foot auxiliary, the Yankee 30 and a re-design of the Interclub dinghy, the 11-foot Minuteman.

In 1969 the plant was moved to a new facility in Santa Ana, California, where Dolphins, Yankee 30s and Minutemen were built. Added to the line were the S&amp;S designed one-tonner Yankee 38 and a 1/4 tonner, the Yankee 26. The Dolphin was replaced with a 24-foot Seahorse trailer-sailer, designed by Robert Finch. The Yankee 28, a Robert Finch design was also built. At it's height, Yankee Yachts employed more than 100 employees, but in the 1974 recession, the business failed. After liquedating the company, Dad and Mom moved my sister and I to rural north San Diego County, and started raising avocados and horses. However, John always considered himself a boatbuilder. In 1999, he and I started a 14' planing dinghy design out of wood, one of his dreams being to build a wood boat from scratch.

I'll try to show photos and more details in subsequent posts. Any that remember Yankee Yachts (it was a long time ago) or have stories of my father are welcome to post. 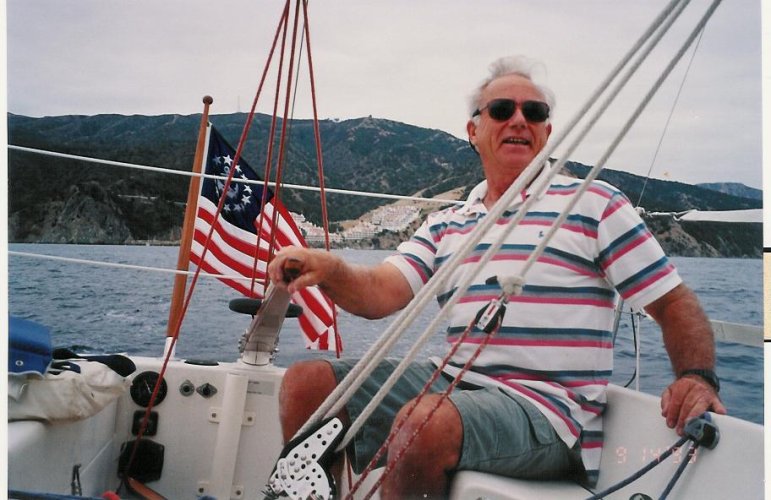 Sorry for your loss Shu.

my condolences Shu and to your family. I am just about to get started doing some major storm repair work on a Yankee Dolphin at my YC.....love the boat, the lines and how well it sails.

Here are a few photos of his final project, the Shumaker 14. The first two photos show it with the original, single trapeze rig. The others show it sailing as an International 14 (it measured in!). The boat was a light air killer in the 14 fleet. 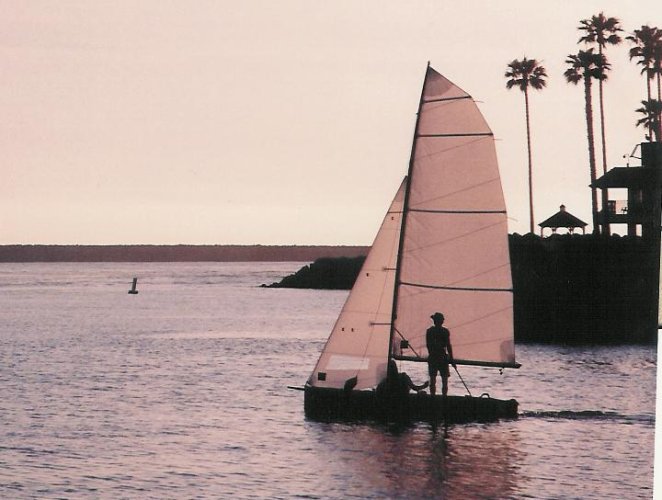 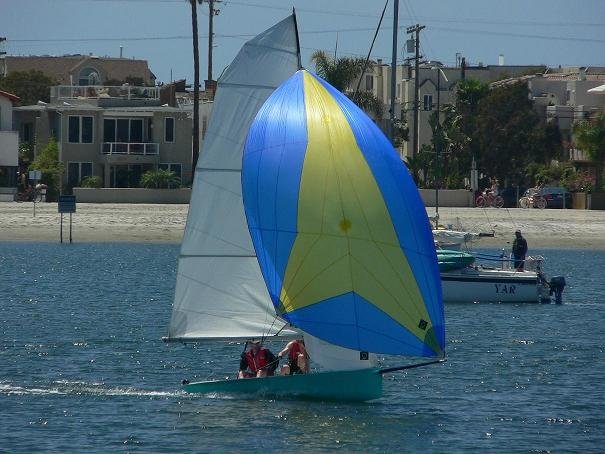 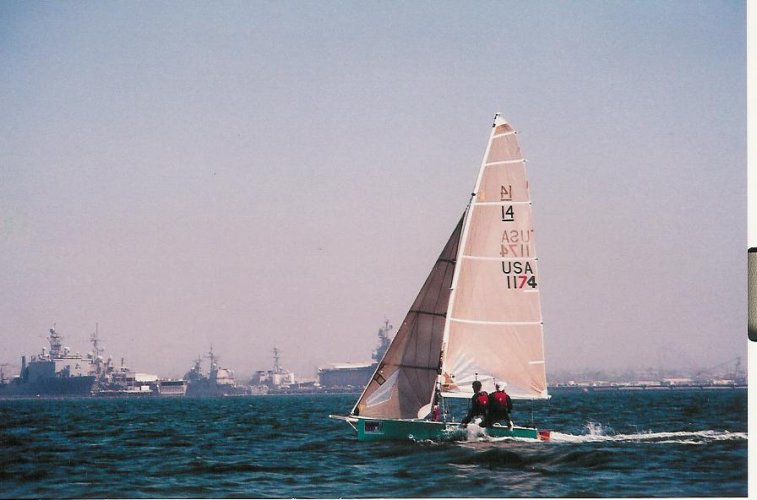 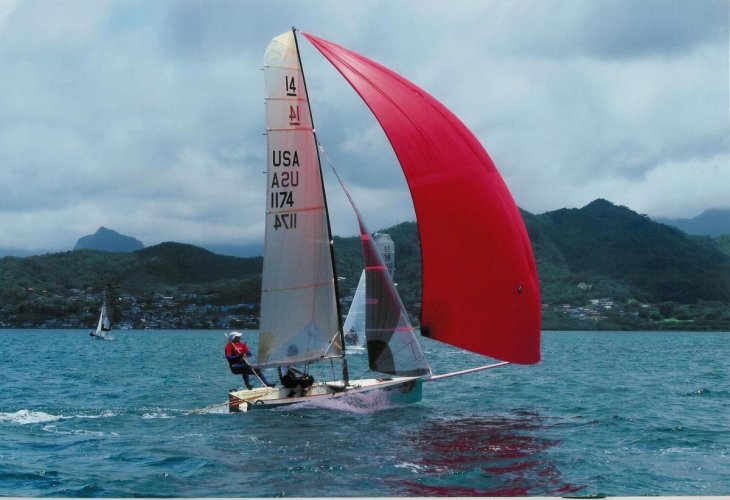 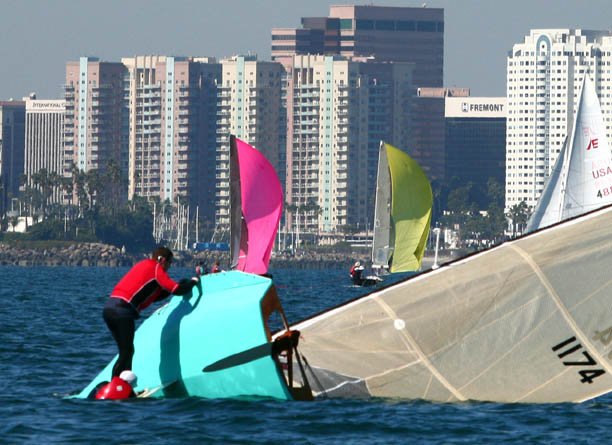 One of my Dad's sales techniques for the Dolphin was to take a client out for a sail and then casually leave the helm and sit on the cabin top while the boat sailed itself. The idea was for the customer to have a "hey, who's on the helm" moment.

My friend Jim restored a Dolphin a couple of years back, and he has been killing it in the local PHRF fleet. He loves that boat, as do I. Very sorry to hear about your loss Shu.

The boat that started it all, Yankee; Dophin hull No. 71. O'day built the previous boats. 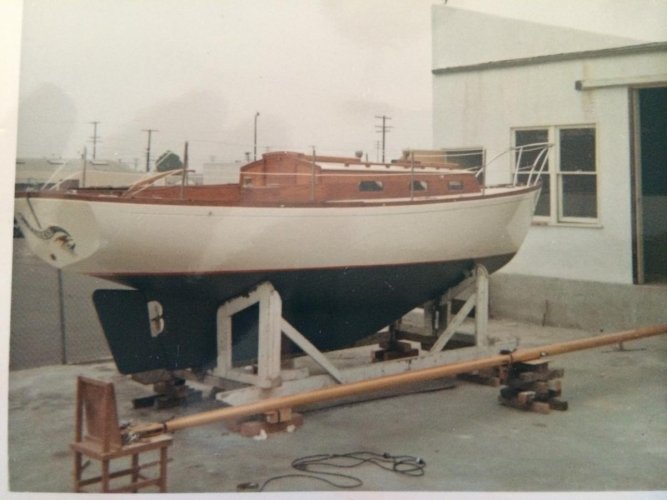 View from the back

I've always LOVED the Yankee Dolphin, and remember a Yankee Dolphin named, I believe, Pharr Lap, in Alamitos Bay, that was absolutely beautiful!

I did the Guadalupe Island race in the 70's on an Islander 36. We came in first, a Yankee 38 came in second. I believe that the Yankee 38 then became the Catalina 38?

Sorry for your loss. Yup, some of us are old enough to remember Yankee Yachts. But I'll always remember Pharr Lap, as the prettiest boat on the gangway by a mile!

Yes Frank Butler bought the tooling for the Yankee 38 in the liquidation sale. I was fortunate to sail in a bunch of one-ton series on Warlock, the company boat. I was 15, small and agile. I did bow. Overnight races around various channel islands off So Cal. No life jacket, no tether. It was a different era.

I'm ashamed to admit that I was a little embarrassed by the Dolphin as a kid. It didn't have the long overhangs the "cool" boats had. Now I must agree it is one of the prettiest boats ever.

I met your Dad when the first Yankee 38, Whimsey Tres, was at the Long Beach boat show. He was a bit dismayed that we had a Ranger 37 on order. We had a lot of good races over the next couple of years.

I have always been attracted to the Yankee boats, especially the Dolphin, Y30, and Y38. That recession was a tough one for a lot of socal yacht builders. A couple of us bid against Butler for the 38 tooling, which was very well done. Of course Butler had deeper pockets that day, hence the Catalina 38.

Here is the graphic on the transom of our boat. That same graphic, modified slightly, became the company logo. 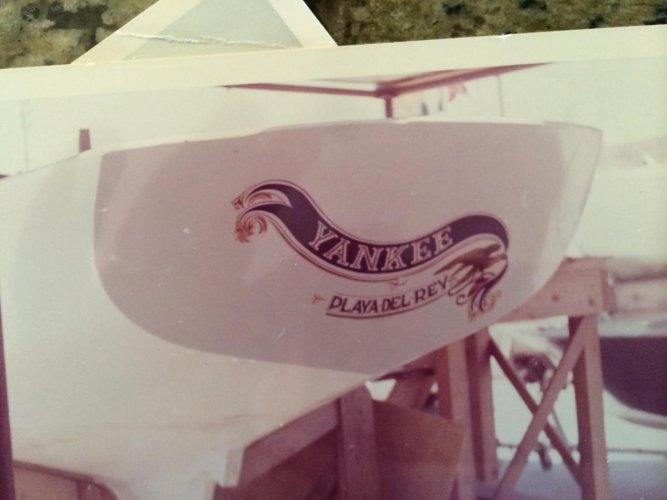 carcrash said:
I met your Dad when the first Yankee 38, Whimsey Tres, was at the Long Beach boat show. He was a bit dismayed that we had a Ranger 37 on order. We had a lot of good races over the next couple of years.

I have always been attracted to the Yankee boats, especially the Dolphin, Y30, and Y38. That recession was a tough one for a lot of socal yacht builders. A couple of us bid against Butler for the 38 tooling, which was very well done. Of course Butler had deeper pockets that day, hence the Catalina 38.
Click to expand...

Did you have the light blue Ranger 37? I remember racing against it on Warlock; we were pretty evenly matched. Pretty boat.

Here is the maiden voyage of the Yankee 30. This was hull No. 2, bought by Lindy Thomas. Hull No. 1, Independence was bought by John Linskey and campaigned very succesfully in So Cal. I forget why hull No. 2 was launched first. Lindy Thomas, my Dad, Olin Stephens, me, and I think one of Lindy's crew were aboard that day. This photo (sorry about the quality) was used for the brochure cover. For that cover, Ben Sears, the illustrator my Dad used, cut off my leg because it hid one of the cabin windows!

*edit* I think I recognize Ned Keonig, my Dad's sales manager sitting in the cockpit in front of Lindy Thomas on the helm. 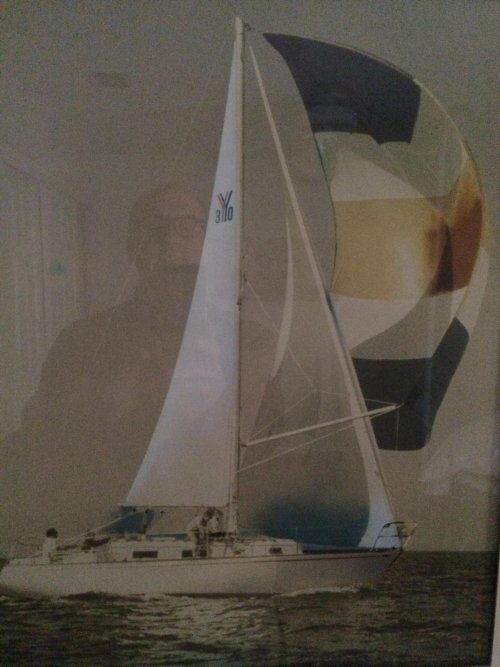 Lindy took the boat back to Chicago and campaigned her successfully on the great lakes. 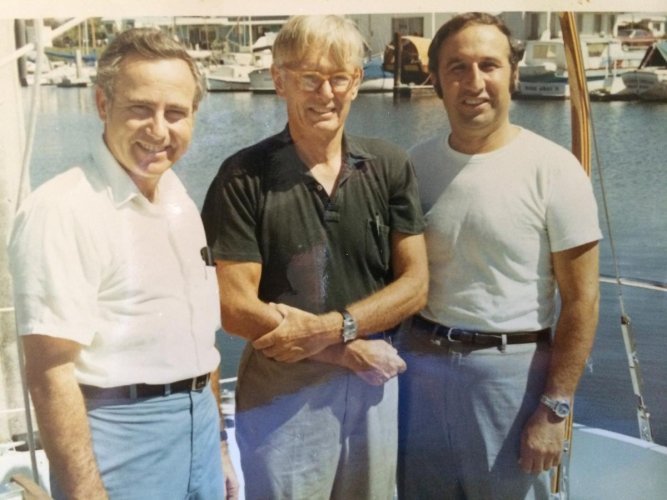 Sorry to hear that - your dad built great boats. I nearly bought a 38 years ago but someone beat me to it while we were driving down to Shilshole from Vancouver.

Here's Yankee, being raced by my Dad off of Marina Del Rey. 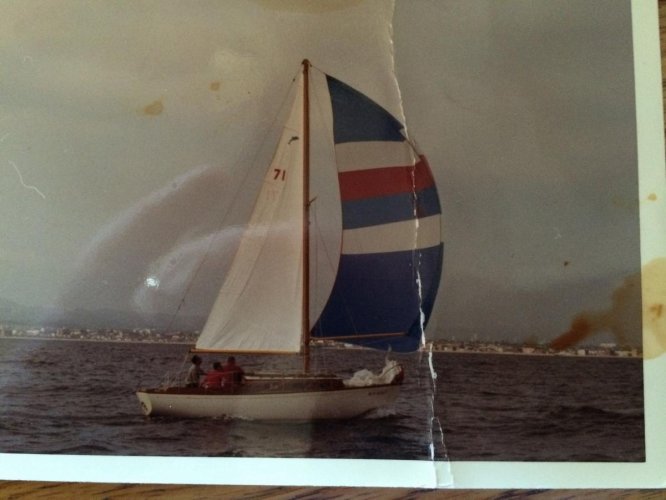 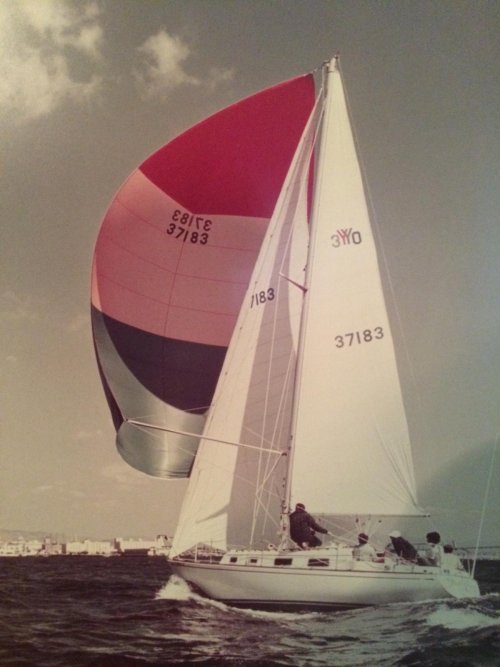 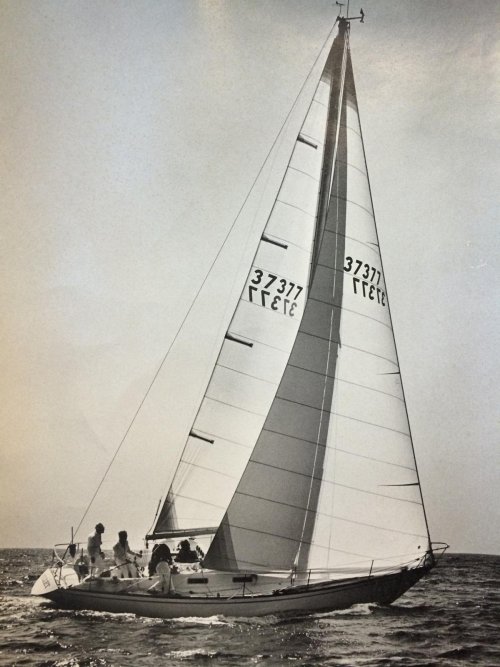