Sometimes they say the quiet part out loud . . .

(I cannot believe that some of ya think using the R-word on these fascists is too mean.) 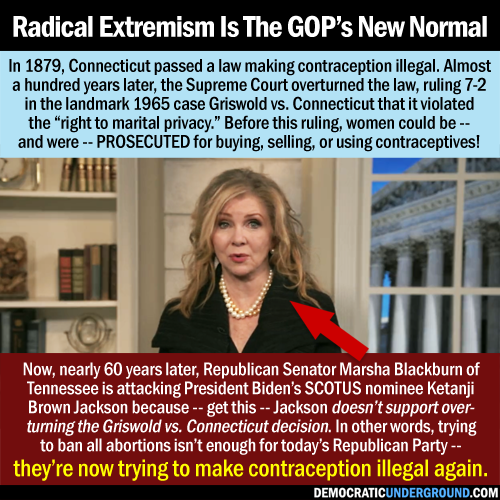 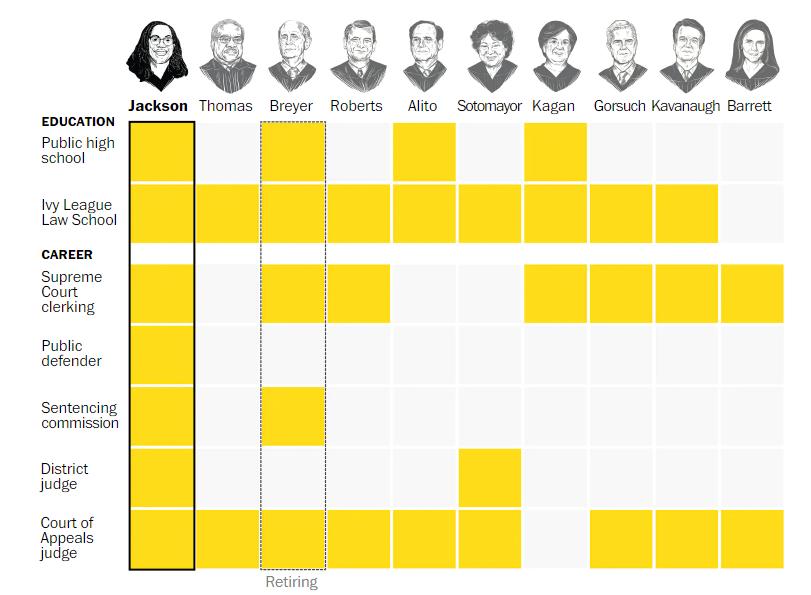 I'll be surprised if the Senate can pass her. After all, don't we have to wait until the voters speak? 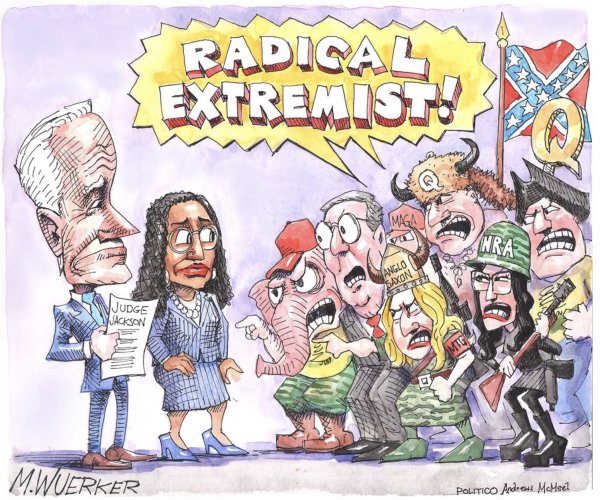 My understanding is that Harvard Law does not have class rankings, but that

being editor of the Harvard Law Review means the person was number one in their class.

Jackson, who graduated with high honors from Harvard College and was editor of the Harvard Law Review ... clerked for Breyer.

(I cannot believe that some of ya think using the R-word on these fascists is too mean.)

It isn't that the Re*ch doesn't deserve to be called the Re*ch, it is like Tom with his dogballs, someone overused a certain word often enough to annoy enough people to get the forum set to change it

Raz'r said:
I'll be surprised if the Senate can pass her. After all, don't we have to wait until the voters speak?
Click to expand...

The Constitution is VERY clear on this: In any decade that will have an election for something, you can only nominate judges from Gilead.

Over the multiple days of her confirmation hearings for a seat on the Supreme Court, Ketanji Brown Jackson will have to sit attentively for hours while the 22 members of the Senate Judiciary Committee speechify at her, testing both her endurance and her ability to refrain from rolling her eyes when the likes of Sens. Ted Cruz (R-Tex.) and Josh Hawley (R-Mo.) ascend the heights of inane demagoguery at her expense.

Amid all that pontification, there’s a particular phrase you should watch out for that will likely be repeated dozens of times: “judicial philosophy.” The phrase should raise red flags because it’s a signal that the person using it is about to pull a fast one, either to claim they themselves believe something they really don’t, or to pretend that an attack they’re making on Jackson is far more high-minded than it actually is.

“I want us to vet Judge Jackson’s judicial philosophy,” said Sen. Ben Sasse (R-Neb.), one of the many potential presidential aspirants who sits on the Judiciary Committee. “I don’t want us to attack her as a human.” Senate Minority Leader Mitch McConnell (R-Ky.) claimed, “Judicial philosophy is a key qualification for the Supreme Court.” While noting that there are plenty of “smart lawyers” out there, McConnell argued that instead of applying laws neutrally, “some would rather start with liberal outcomes and reason backwards.”

There you have it: The idea that a judge might have a conservativeoutcome they want to achieve isn’t even worthy of consideration; only liberals would be so crass. Conservatives, you see, have a judicial philosophy.

This is comfortable terrain for Republicans because they know that dressing up policy preferences in a phony “philosophy” is a game only they usually play; liberals tend not to bother. Jackson herself was asked about this during her confirmation to the U.S. Court of Appeals for the District of Columbia Circuit; she replied, “I do not have a judicial philosophy per se, other than to apply the same method of thorough analysis to every case, regardless of the parties.”

While liberals sometimes talk about the “living Constitution” — the idea that as society evolves, our understanding of the Constitution changes — they don’t pretend that it’s some kind of guidebook that tells you the “right” ruling in any given case.

But that’s what conservatives claim to possess in their favored “philosophy,” originalism. They say that the original intent of the Framers should be paramount when deciding constitutional questions, and once that intent has been located, the answers to legal questions will reveal themselves, lit from within with the glowing light of divine wisdom.

The truth is that the overwhelming majority of the time, the Framers’ intent is either impossible to discern or utterly irrelevant to the question before us, for the simple reason that they wrote the Constitution almost two and a half centuries ago. What would the Framers think of voter file purges, or regulations on carbon emissions, or the use of facial recognition by police? To even ask is preposterous. Yet conservatives claim to know what Madison and Jefferson would say — and by fortuitous coincidence, their seances with the Framers’ spirits always lead right to their preferred policy outcomes. Funny how that works.

There are other variants of conservative judicial philosophy that are just as likely to demand conservative rulings. “Textualism” requires close readings of the Constitution and legislative texts — unless conservatives don’t like what the text says, at which point the text is discarded. They passionately oppose “judicial activism” and “legislating from the bench,” until the court considers laws they don’t like.

The alternative to all this hogwash would be a little candor. If they wanted to be honest, Republicans could just say that they oppose Jackson because they’re hoping for Supreme Court rulings that advance conservative policy goals — striking down Roe v. Wade, limiting the federal government’s power to regulate, weakening voting rights, diminishing the ability of unions to organize workers — and she is unlikely to provide them.

Instead, Republicans claim with a straight face that they’re deeply concerned that like other liberal court nominees she might be contaminated by policy preferences. This is after insisting the conservative nominees about whom they were so rapturous had no such preferences at all; the likes of Amy Coney Barrett or Brett M. Kavanaugh, they told us, were unsullied by politics, possessed only of an admirably neutral “philosophy.”

When you hear them invoke the words “judicial philosophy,” that’s when you know the scam is afoot. By now, none of us should be foolish enough to fall for it.

Is it too late for her to acquire a reputation as an epic consumer of beer with a penchant for sexual assault?  Or possibly a knack for finding pubes on soda pop cans.  Probably not, saddled with just being an awesome judge who is too good to associate with some of the SCOTUS clowns.

Let's hope Jackson doesn't lose Biden's support and fights to the bitter end.  Will it come down to Manchin's vote and which way the wind is blowing that day?  I hate that spineless asshole.  I'm hoping the shoe drops on the Congressmen who were central to 1/6.  Jordan I'm sure would much rather shove a cock in his mouth than respond to the allegations.

Anyone can compare Miers with Barrett? For quals ...?

I'm going with Barrett up close.

She can call me Commander.

Josh Hawley is already treating her as if she's a well known street walker in the red light district.

She is extremely qualified and will no doubt make an excellent Associate Justice on the SC.  I'm glad Biden nominated her.  Good luck to you, Justice Brown-Jackson.

At least now we've ticked all the race and gender boxes and can get on with just living in a colorblind society where you are judged by your character and not by the color of your skin.  I have a dream......

Burning Man said:
She is extremely qualified and will no doubt make an excellent Associate Justice on the SC.  I'm glad Biden nominated her.  Good luck to you, Justice Brown-Jackson.

At least now we've ticked all the race and gender boxes and can get on with just living in a colorblind society where you are judged by your character and not by the color of your skin.  I have a dream......
Click to expand...

You think she’s going to get a vote?

Raz'r said:
You think she’s going to get a vote?
Click to expand...

Burning Man said:
At least now we've ticked all the race and gender boxes and can get on with just living in a colorblind society where you are judged by your character and not by the color of your skin.  I have a dream......
Click to expand...

Think of the portraits of all SCOTUS judges and with a straight face tell us that race and gender haven’t been used to make judge selections for hundreds of years.

Please don’t be a hypocritical douchebag. Blacks and Hispanics and Asians have been judged by their skin and not by their character or ability since our nation was founded.

Burning Man said:
What do you mean??  She's going to be one of 9 votes.
Click to expand...

I think manchin will have “concerns” and she’ll be scuttled. I hope I’m wrong but when the senate flips in 7 months, there will be no further confirmations.