Monday, November 23, 2020
The crew of the Maxi Edmond de Rothschild turns yellow
After a long remote weather briefing with the Marcel van Triest router, the crew of the Maxi Edmond de Rothschild gathered in full alongside Cyril Dardashti, the director of the five-arrow team, made the decision to switch to yellow code, with a possible departure in just over 24 hours. Although the weather models still refuse to signal an ideal window, Franck Cammas and Charles Caudrelier, the two skippers, want to give themselves the opportunity to conquer the Jules Verne Trophy and provoke their luck by cutting the imaginary line off Brest tomorrow, Tuesday, November 24, in the early evening.
Will you leave, won't leave?
This Monday, doubt persists and a lot of uncertainty remains. While all the conditions are in place to guarantee good conditions at the start with the prospect of reaching the equator in very honourable times, the South Atlantic remains less inclined for the time being to offer the ideal context to give free rein to a smooth descent in search of the low pressure systems of the southern seas. The fault of the Saint Helena high, which gives the forecasts a hard time and leaves the risk that in about ten days the favorable winds will escape the sails of the Maxi Edmond de Rothschild and slow him down in his hunt for the absolute speed record around the world sailing. On one model, it passes; on the other, it gets stuck.
Click to expand...

Departure postponed for today but a new window targeted for Thursday!
Record hunting is not a bed of roses, but the many variables, which have inevitably been part and parcel of life for the Gitana Team and her crew since the start of standby, were known about by one and all before they decided to take on the Jules Verne Trophy. There are a great many expectations and the desire to see the six sailors of the Maxi Edmond de Rothschild setting sail is still intact, but the five-arrow stable’s weather cell is keeping a cool head to give itself every chance to beat the record of 40 days 23 hours and 30 minutes set by Francis Joyon and his team in 2017. The departure, which was still being envisaged yesterday, for late in the day this Tuesday 24 November is no longer a possibility, but the team remains on code yellow as another opportunity might well present itself on Thursday.
Click to expand...

[email protected] said:
" Thomas Coville and his 7 team mates will leave Lorient this Tuesday afternoon to head to Ouessant and start storming tonight

Thanks. "In consultation with the routing cell, headed from land by Jean-Luc Nélias."  Will be good to watch Nélias and his cohorts at work again.

Curious if Sodebo and  Gitana choose different start times. Seems like a pursuit race start, based on whatever low in the south they are eyeing. 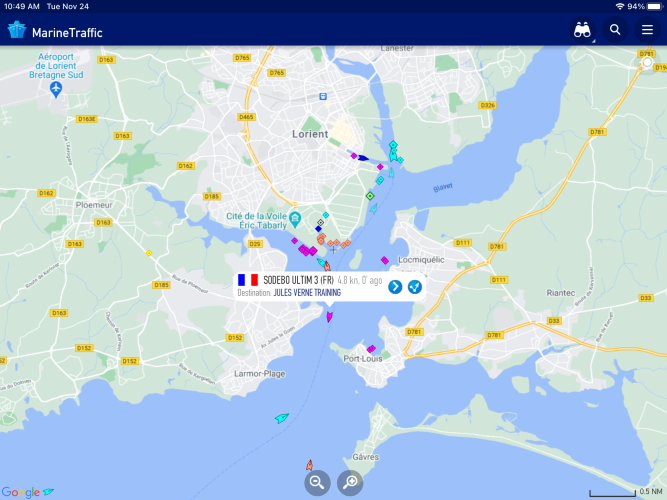 I *think* this is Gitana

Is there tracker somewhere for this attempt?

I haven't found it on their site yet, and the site looks like french only, and my french is terrible.

Nothing mentioned on the Official TJV twitter feed,  and also can't find one for Sodebo

Sodebo has a whole site (in FR) for the attempt, makes no sense not to have a tracker.
Probably going live once they officially start. (startline and all of that)

I'm getting Sodebo tweets with crew pics leaving the dock...

That was the best way to keep track of all the records. Wikipedia page looks decent, though.

As an you shall receive, cartographie button is up.
Or here the direct link to the thing: https://sodebo-voile.geovoile.com/tropheejulesverne/2020/tracker/

Very tight preparation timing for Sodebo. Following their "around the Atlantic" race and damage to the starboard foil and rudder, they JUST got the replacement parts in the boat, and they were waiting for some stronger winds in the past few days to put the foil under full load and hope that everything was fine.

They did this test this morning (Tuesday 24th), French time; and they are leaving La Trinité this afternoon to get to the starting line and cross it tonight...

They must really like the weather.
Or think that there won't be a better option anytime soon. (Start and turn back if the forecast is not good enough is not exactly new.)

Sodebo boat tour (in French). Note the wheel next to the 'pilot seat' controlling the main hull foil if I understood correctly:

Are there crew lists published anywhere?

On the website. Sodebo is going with 8 incl. media.

Gitana is headed up to La Trinite.