I'm trying to convince my Dad to take to a Regatta that's fairly far away, round trip would probably end up being ten hours.

Anyways, his main worry is that the boat might be aversely affected by being in a trailer that wasn't designed for a Laser for so long. Personally I don't see a problem with it. It has two supports, which seem to me would support a Laser adequately. It's true it dosn't have suspension, but I don't know if that matters. 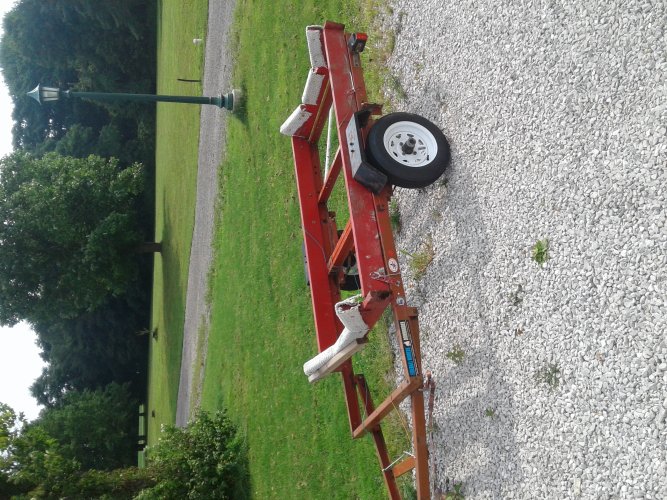 what do you guys think?

P.S For those that are wondering, I did find a new Laser, I'll post pics soon.

The boat will be fine as long as you don't try to ride in it, or fill it is with other shit you don't want in the car.

You what you can to shape the trailer bunks to fit the hull and pad out.

The suspension on most small trailers is much too hard to do any good for lightweight dinghies anyway.

Ideally, you want the boat supported under the gunwales so there is no pressure on the hull at all. Next best is upside down with  support longitudinally on either side of the deck outside the cockpit. Third would be upside down with latitudinal support just aft of the traveller and near the mast step. It’s hard to tell if those Fireball bunks can be removed easily, but the simplest of the the three would be to have a couple padded 2X6’s running across the trailer - the location of the present bunks would probably do. You can make them long enough so they stick out the side and you can strap the spars on there.

Admiral Hornblower said:
P.S For those that are wondering, I did find a new Laser, I'll post pics soon.
Click to expand...

Good news on the new Laser!

What @Bill5 said is good advice - his option 3 sounds like a quick retrofit on your trailer.

Sailing on Chautauqua Lake, NY (but I live in Coll

European Bloke said:
The suspension on most small trailers is much too hard to do any good for lightweight dinghies anyway.
Click to expand...

Definitely. I can't quite tell form the pic, but you probably have a leaf or two that you can take out of that spring pack that will help a little. Not running high pressure in the tires will also help a little. The more stuff you can put on the trailer (NOT in/on the boat, as mentioned) will help a some too. For my Force 5, I have wooden hold-downs that attach to uprights on the trailer so they secure the boat but any weight isn't transferred to it. On those are all of the dolly and mast parts.

Too far from Anywhere

Any chance you and your Dad can car top the Laser.


How about borrowing a proper Laser trailer?

I would try to modify that trailer to hold the hull upside down.  Still, right side up with good supports is not the end of the world as long as the boat is snugly secured (but not TOO tight).  I think the real issue is when a hull sits on a trailer with bad support for a period of years.

Specially for a laser... probably cost more that the boat 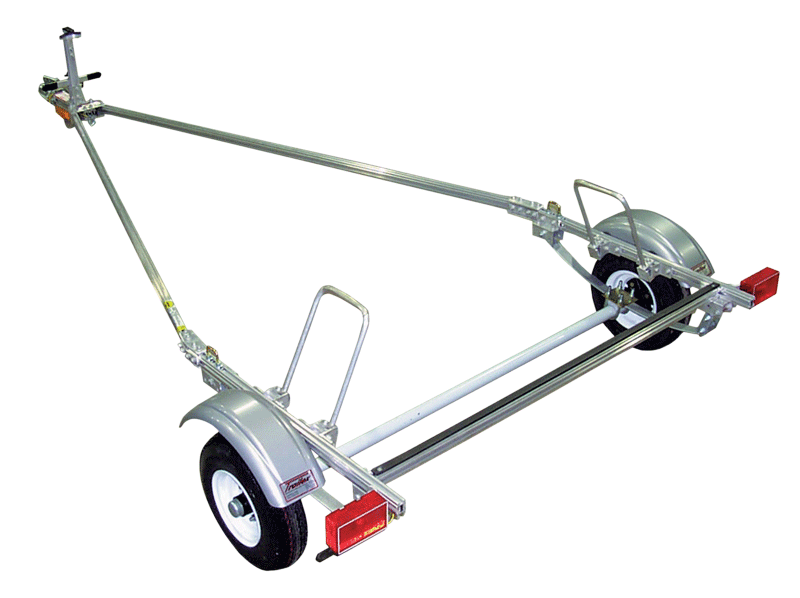 Ventucky Red said:
Specially for a laser... probably cost more that the boat

Yes, a good trailer. If you know someone who runs a welding shop, you can easily modify an existing trailer (such as the Fireball trailer of the OP) to match this design. A friend did this years ago and worked perfectly and a fraction of the cost of a new Trailex.

Alan Crawford said:
Yes, a good trailer. If you know someone who runs a welding shop, you can easily modify an existing trailer (such as the Fireball trailer of the OP) to match this design. A friend did this years ago and worked perfectly and a fraction of the cost of a new Trailex.
Click to expand...

While that may be true, the soft suspension on the trailex is VERY nice to the boat. Modifying an old trailer may give you good support, but it is unlikely to be as easy on the boat. If you REALLY want to be good to the boat, a Yakima Rack and Roll with the boat upside down has a GREAT suspension.

Ventucky Red said:
Specially for a laser... probably cost more that the boat

Why build a trailer that doesn't just take the trolley supporting the boat like it's designed to? Why build support into the trailer?

From threads here they don't seem common outside of Europe 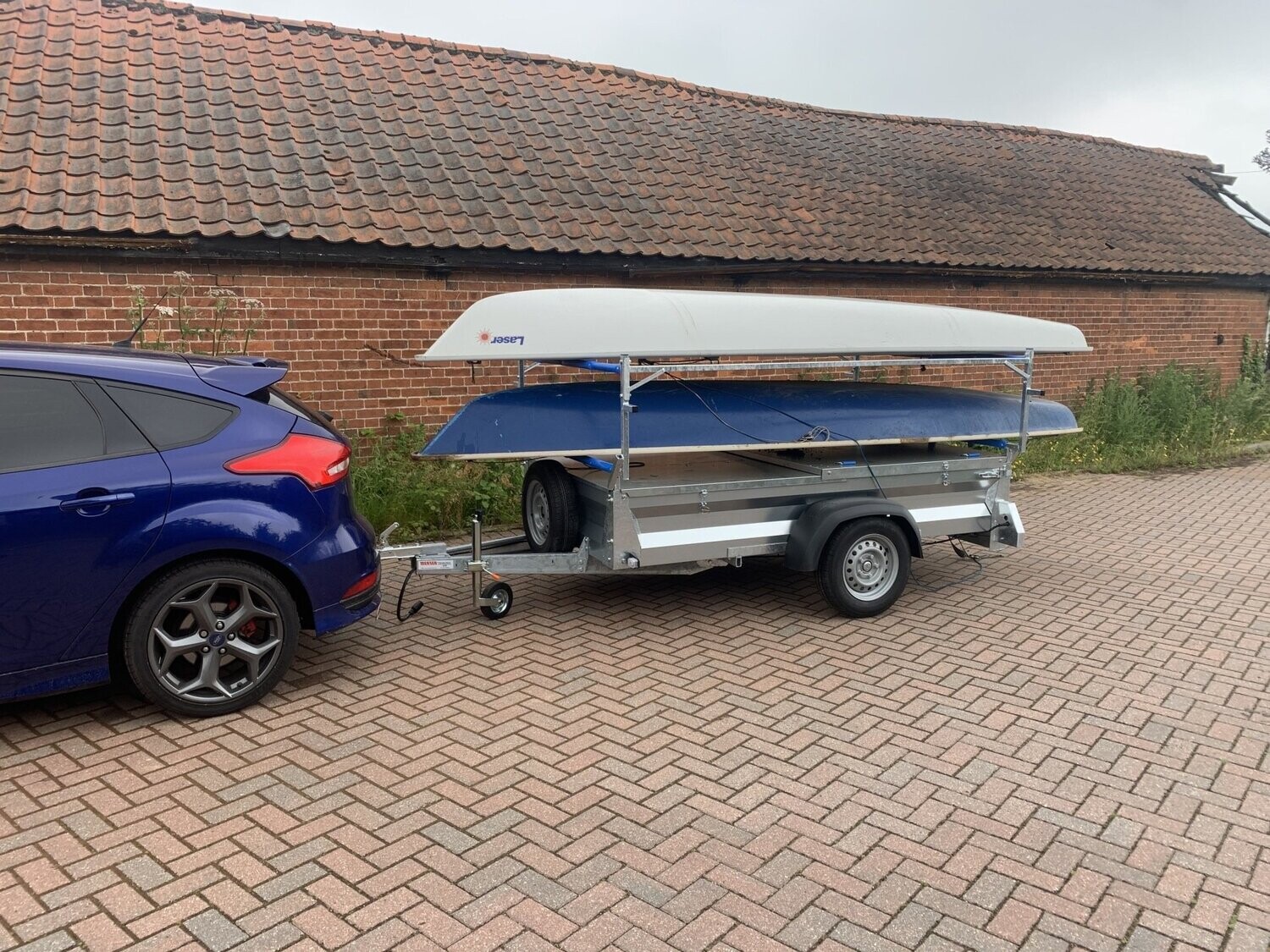 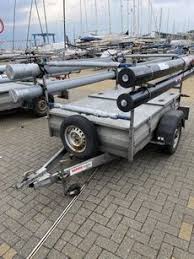 One more vote to not transport it on its hull; flip it over and transport it upside down with the weight on the deck (not hull).  Or get a Laser trailer that support it at the lip of the deck/hull joint.  But upside down works fine.

In the beginning Laser days, we learned that trailers with bunks put dents in the hull eventually.  We also saw that trailers with bunks put dents in the decks when upside down unless the bunks were right where the decks were strongest.  It didn't take long for trailers being made to hold the boats under the roll over hull/decks joints.  Plenty of us modified trailers to hold the boats that way.  I owned about 3 Kitty Hawk Laser trailers over the centuries.  If you have a dolly, just keep the boat on the dolly, and fasten the dolly to the trailer.

I modified the trailer in the way Bill5 suggested, also gave it a new coat of paint! 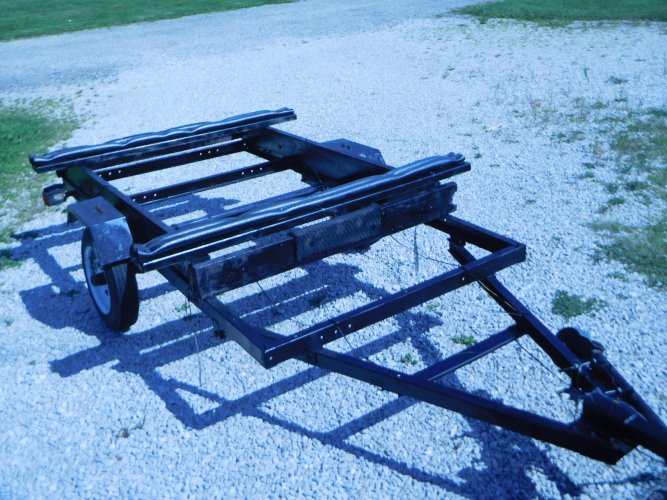 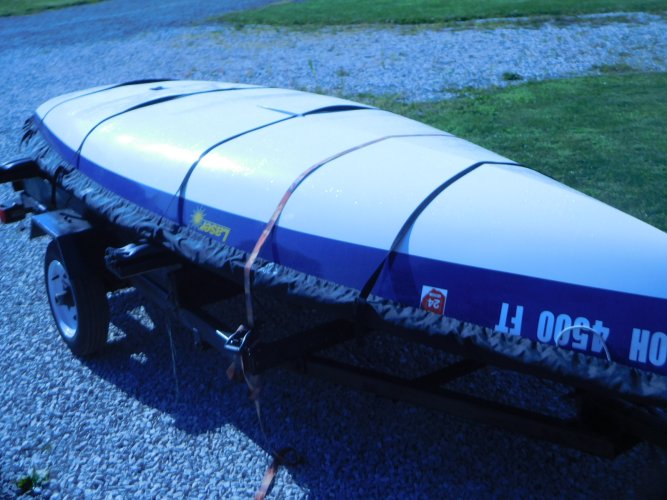 Admiral Hornblower said:
I modified the trailer in the way Bill5 suggested, also gave it a new coat of paint!
Click to expand...

Good job.  I found (the hard way) that using a beach dolly to support the hull under the gunwhales led to cracking of the hull/deck joint and leaking (mind you, I was towing several thousand K's each time).  I built a lightweight box that fitted on the trailer.  Lift the box lid and store spars, foils, sails etc inside the box.  On the top of the box lid I glued 100mm thick soft foam (builders expansion joint foam, several layers thick).  Hull went upside down, deck on the foam.  Dolly was used as a clamp to hold the hull down on the foam, by lashing between the dolly and the trailer.  We could carry a second boat by using decking timber (merbau, 90mm x 18mm) lengthwise lashed to the bottom of the first dolly (so upper-most in the air) with more foam on the timber slats.  The second hull went onto the padded slats, again deck down and clamped in position using the second dolly.

This rig was simple to build, cheap, reliable and I towed 2 boats at least 20,000 Km with it.  Bearing repack before each trip and a new set of light truck tyres at the beginning was all it ever needed. 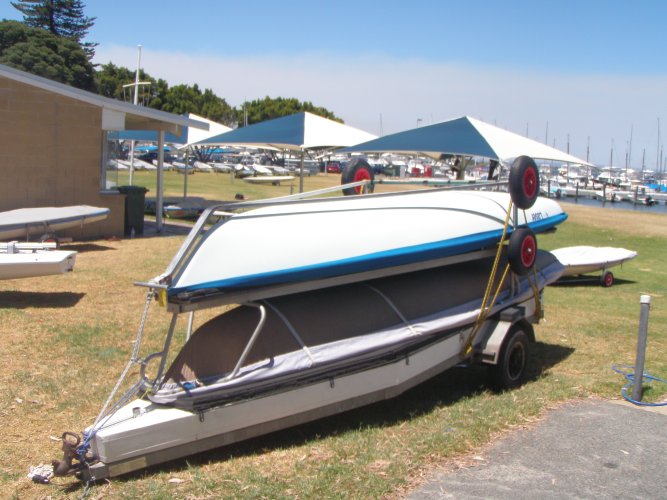 With Michael Mills of NB Laser Sales, at Eucla on the Nullabor Plain, halfway between Perth and Adelaide.  This would have been about 2010. 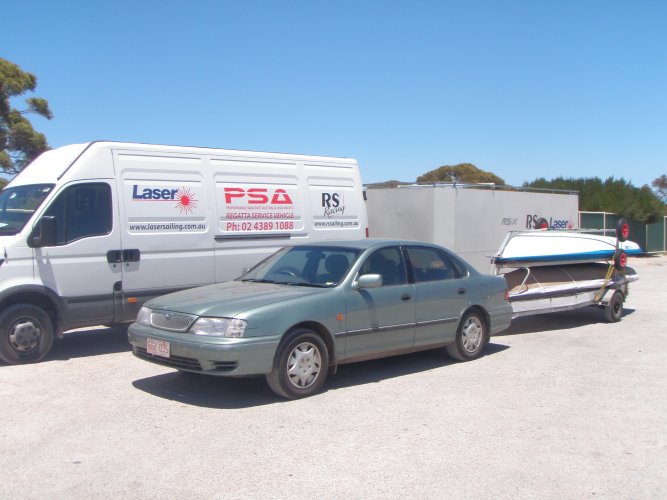 At the border between South Australia and the Northern Territory on the way home to Darwin.  The round trip would have been 10,000 km - just this one trip! 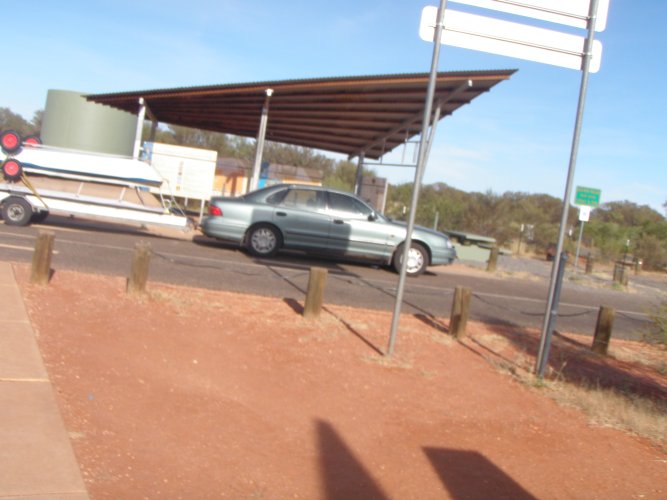 Some photos from my club.

For a boat on a dolly. Note the wells to accept the dolly wheels at the back of the trailer. 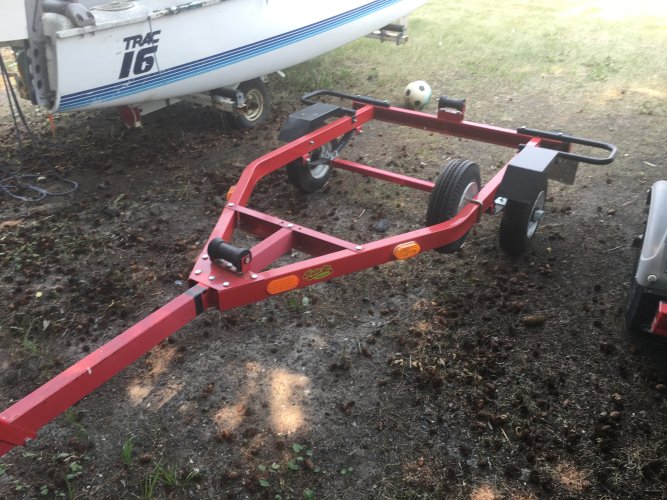 Here is one with longitudinal pads for upright hauling. The idea was the length of the pads would spread the load well. The original owner also used it as a dolly - it is a very  light aluminum Trailex trailer. 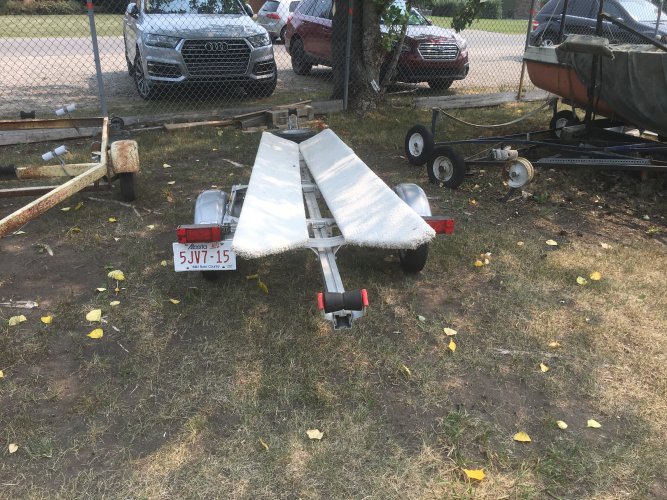 And if you want to take a lot of boats… 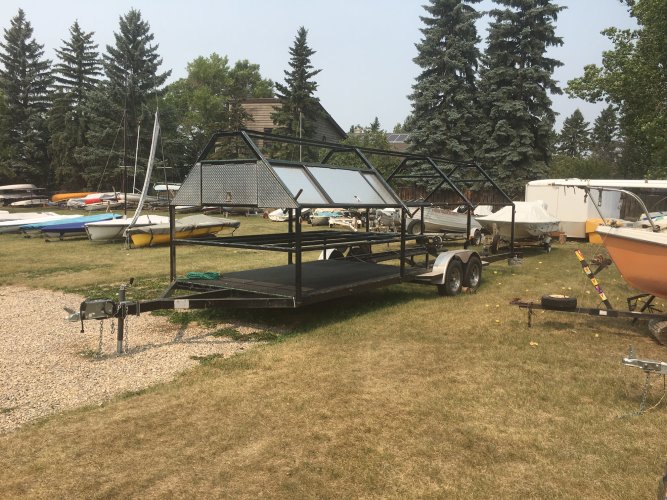