It truly is a bummer but they are (were) sailing with different objectives.

Following the capsizing occurred yesterday in the middle of the afternoon, more than 800 miles off the Brazilian coast d es, then it progressed to close and was caught by a grain, Lionel Lemonchois, only slightly injured hand, expressed his desire to stay aboard his Maxi80 Prince de Bretagne and organize the repatriation of it.

CROSS Gris Nez was informed yesterday from its application and remains under surveillance, thus following the evolution of the situation. In parallel, the technical team skipper mobilized to send a team in Brazil earlier to launch rescue and towing trimaran whose tag continues to send. These operations should be spread over several days, but Lionel is safe in the central hull of his boat and lacks neither water nor food.

All over the place

The rescue plan into action
Since yesterday evening, the bailout Lemonchois and recovery Maxi80 is running. The team of Prince de Bretagne , who studied all the possible solutions , has already implemented various operations , starting with the mobilization of a crew of four ( Frédéric Le Peutrec , Patrice Richardot Gurloës Merrien and Quentin MONEGIER ) will fly at the end of the afternoon in the direction of Rio de Janeiro , where she is expected at 7 am local time tomorrow morning . At that time , two others ( Helfer and Guillaume Didier Le Vourc'h ) take off in turn to South America to lend a hand on site. In addition, two local coordinators are already hard at # 8220 ; PIECE to prepare the necessary equipment. Their goal: to organize towing trimaran in coordination with Arnaud Aubry, remained at Lorient in constant contact with Lionel .

Recall that the multihull is now more than 800 miles from the Brazilian coast abeam of the island Trinidad, with his skipper on board who hoped to stay put after capsizing occurred yesterday between 3:30 p.m. ET 16h . "The trimaran is secure, the central hull is not damaged and there is no risk of dislocation. I have with me the Iridium rescue boat and easy access to food and water. Same as regards the BIB ( liferaft ) if I were to need it , "said the head of the browser Prince de Bretagne with whom he could share in mid- day , noting also that his hand injury was not serious, that '' it drifted due 25 to 30 miles a day in the direction of Salvador de Bahia, the sea was calm and it was raining heavily. In return, the double winner of the Route du Rhum was assured of the confidence and unwavering support of the Breton farmers in the event it passes. For now, he is preparing for a long wait since the tug chartered by the team will not be in the zone for at least five days.

We will inform you of the progress of the operation .
K

I'd guess the center hull may even be dry with the dihedral on the amas and no rig to keep it from riding over the waves?

While activates technical team to gather all the necessary equipment repatriation and reversal of Maxi80 Prince de Bretagne , Lionel Lemonchois not idle either. For two days , he made ​​sure to prepare the platform for the upcoming operation and thus secures what might be likely to be thrown when the trimaran will be given to the place. Yesterday he cleaned the inside of the central hull which had spread the engine oil during capsize . He said he suffered a bit of heat. And due to the latitude where it is located, the temperature during the day cheerfully than 40 ° C. He also said that the swell was a little flattened since last night and the boat was slamming , thus a little less. What allow him to sleep almost correctly and gradually resume a rate earthling . Finally, he expressed his astonishment see neither bird nor fish around him , they obviously preferring shallow waters .
S

Rescue party is under way. In about 5 days they should be trying to up turn PdB.

Translation of a sat phone interview with Lionel Lemonchois by a journalist, Aline Merret, from "Le Télégramme de Brest", published on www.courseaularge.com

Lionel Lemonchois capsized 8 days ago in the middle of the Atlantic Ocean during his record attempt on "La Mauricienne"; still on board "Prince de Bretagne", upside down, he is waiting for his team coming on site with a tow boat, from RIo. They should be at his location in about 2 days. Aline Merret has been able to contact him by sat phone.

Can you tell us what happened during the capsize?
I was sailing close hauled, in 16-17 knots of wind, getting lighter. I had full main and solent. I decided to take some rest inside: I hadn't done so for several days... The wind picked up. When I eased the sheets, the sails did not move: the sheets had dried up around the winches... It just boils down to a few seconds delay in the easing out of the sheets. A stupid and unforgiving accident.

Then you had to secure the boat?
I had only one thing in mind. Since there was a residual swell, I was afraid that the mast could damage the boat from underneath. Quickly, I got into the water and cut all I could get to. I freed the rig in order to save the boat. There is nothing left underneath the boat. The mast was not recoverable anyway; it had broken in two pieces during the capsize.

Since then, how do you live this waiting period?
I have ups and downs... I try to keep my mind busy and not think about the time passing by. I fix a few things. If I can, I get on the boat to recover lines and running rigging...whatever I can. There is no water ingress inside. I just have to wipe it up once in a while. It is mainly the heat that is difficult to cope with. I have to close the escape hatch to keep the water out. It quickly becomes unbearable inside.

Have you seen other boats?
Monday, for the first time. I am in an area outside all regular traffic lanes. A small sailing boat from Argentina, coming from Cape Town and going to Rio, stopped by. It was crazy. They were more worried than I was. They could not understand that I wanted to stay on my boat, upside down. They wanted to take me away. I had a really hard time to make them understand that I wanted to stay. Other than that, there is nobody, neither on the water nor in the sky.

When do you think the tow boat will arrive?
Yesterday noon, the boat was 420 miles away. At the speed it is going, it should be here within 2 and ½ or 3 days… At least, I hope so!!

What happens next?
As soon as the team is here, we will put the boat back up. We will fill up one of the floats with water and pull on the opposite float. After that, we empty the flooded ama. It has been done before. It should be OK. The tow boat is coming from Rio, so that’s where we are going back, with the multihull in tow. It is the closest large harbor to set up a shipment of the trimaran, back to Europe.

I assume they will over turn Prince de Bretagne tomorrow in daylight.

The latest tweet from the Prince de Bretagne website states the tug is now along side the trimaran.

Prince de Bretagne is up side up again. Everything went acording to plan.

Details tomorrow, photos will have to wait a little more.

Thanks for the updates, JPS.

Prince de Bretagne is right-side-up, and is being towed at 6 knots to Rio de Janeiro.

Lionel Lemonchois did have an encounter with a Russian flagged freighter, who stood off about 1/4 mile, but never answered the tugs VHF calls. Mr. Lemonchois said he did not want to think about a possible outcome had the tug not been there, and he had been alone

Attached is a drawing from the PdP Facebook page on how their righted the trimaran. 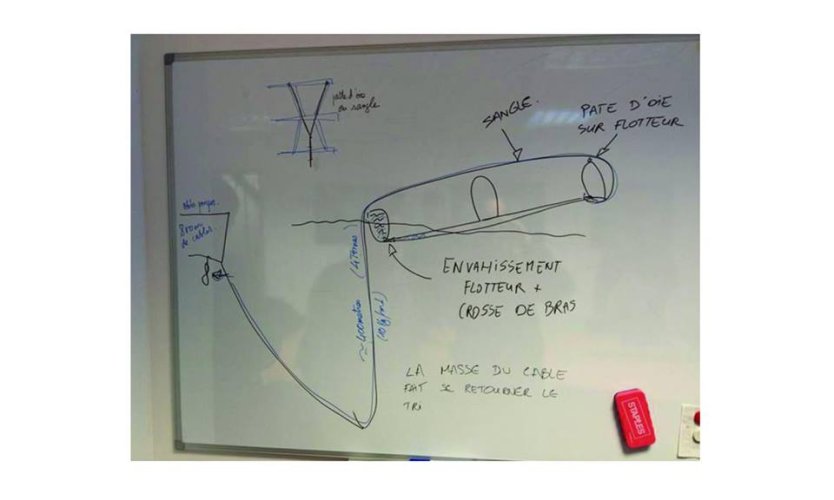 The website states that Lionel Lemonchois is detremined to have his boat ready to race in the 2014 Route du Rhum. 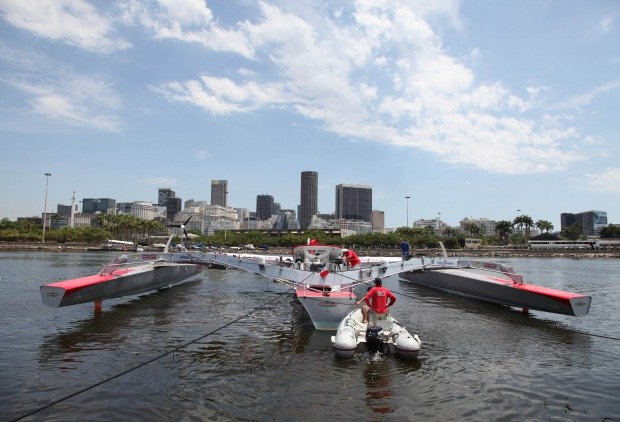 Video of the up turning in their web site:

It seems easy, but apparently it was not on first try.

PDB was loaded April 1 onto the cargo which will bring her back to France leaving Brazil April 2.