Maybe Storming The Capitol Wasn't Such A Good Idea

Chris in Santa Cruz CA said:
Could have been a lot worse. Did you see the aristocrats?
Click to expand...

Seriously, what the fuck builds up in your empty eye socket that prevents a fake eye?

Mike G said:
Seriously, what the fuck builds up in your empty eye socket that prevents a fake eye?
Click to expand...

Well you got me there. Fuck if I know. I just know a visual of trump fucking him in the eye socket is a lot worse.

Chris in Santa Cruz CA said:
Well you got me there. Fuck if I know. I just know a visual of trump fucking him in the eye socket is a lot worse.
Click to expand...


His mushroom has to fit.


I'll bet he was muttering some serious oaths after that.

The tourist asked the pirate, "How'd you get the hook?"

Pirate, "We were fighting the Limeys and one of them chopped off my hand, but I cut off his balls".

Tourist, "How'd you get the eye patch?"

Pirate, "A Sea Gull shit in my face and I forgot about the hook."

In prison he'll be with the Aryans.

Raz'r said:
I thought @Dog 2.0 said they would get away with it due to "informants?"
Click to expand...

No, my interesting question is why, given they had so many informants in both the Proud Boys and Oath Keepers did they not do anything to prevent or even prepare for Jan 6.

Bus Driver said:
There was a poster who recently pointed out no one had been charged with Insurrection.

Funny that Rhodes was charged, and convicted, of a much more serious crime.

But, we can all rest easy no one has been charged with Insurrection.
Click to expand...

Dog 2.0 said:
No, my interesting question is why, given they had so many informants in both the Proud Boys and Oath Keepers did they not do anything to prevent or even prepare for Jan 6.


Almost like they didn’t take it seriously, didn’t think they needed to step in before the idiots did anything beyond mouthing off and playing at insurrection.

Somebody should look into the greater conspiracy, huh?

phillysailor said:
Almost like they didn’t take it seriously, didn’t think they needed to step in before the idiots did anything beyond mouthing off and playing at insurrection.

Somebody should look into the greater conspiracy, huh?

Yes, we agree, the investigations should continue into the new congress.
B

Dog 2.0 said:
No, my interesting question is why, given they had so many informants in both the Proud Boys and Oath Keepers did they not do anything to prevent or even prepare for Jan 6.


It is an interesting question as to why Trump's FBI and DOJ may have had people imbedded that enticed violence to stop the peaceful transfer of power. Of course the video you posted did not provide any evidence they did and the nice lady, under oath I assume, at the end stated that they didn't to her knowledge.

Today, after an eight-week trial and three days of deliberations, a jury of five women and seven men found Elmer Stewart Rhodes III, 57, the founder and leader of the right-wing Oath Keepers gang, and Kelly Meggs, 53, who led the Florida chapter of the Oath Keepers, guilty of seditious...

Starting to get real!!! Hoping for well deserved jail time for these insurectionists!

"The South Carolina Supreme Court today unanimously ordered Mark Meadows, who was Trump’s last White House chief of staff, to testify before the Fulton County, Georgia, grand jury investigating Trump’s attempt to overturn the 2020 presidential election in Georgia. Meadows was on the phone call Trump made to Georgia secretary of state Brad Raffensperger on January 2 to demand he “find 11,780 votes, which is one more than we have,” making his testimony key to the investigation. Meadows lives in South Carolina, where he tried to argue that he could not testify because of executive privilege. Lower South Carolina courts disagreed, and now the state’s supreme Court has said that Meadows’s arguments are “manifestly without merit.”

In Washington, Trump advisor Stephen Miller testified today before the grand jury investigating the events of January 6, 2021. The Justice Department subpoenaed Miller in September. He also testified before the House Select Committee to Investigate the January 6th Attack on the U.S. Capitol. "
Last edited: Nov 30, 2022

Blue Crab said:
In prison he'll be with the Aryans.
Click to expand...

"with" is putting it politely.

He's now a rat and soon will be a bitch.

I'd offer it is like murder charges. The premeditation (conspiring with others) takes it up a notch, or two.

20 years is the max for seditious conspiracy but I’m thinking he only sees half of that.

Sol Rosenberg said:
20 years is the max for seditious conspiracy but I’m thinking he only sees half of that.
Click to expand...

Ha!
The right half? 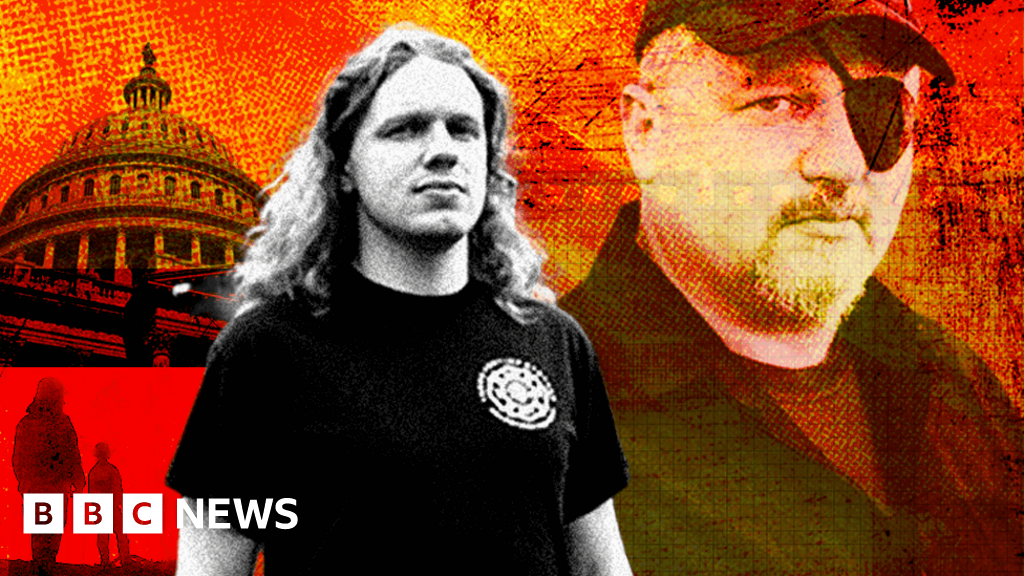 Stewart Rhodes' son: ‘How I escaped my father’s militia’

Militia leader Stewart Rhodes could face two decades in prison. It took his son years to escape him.
www.bbc.com 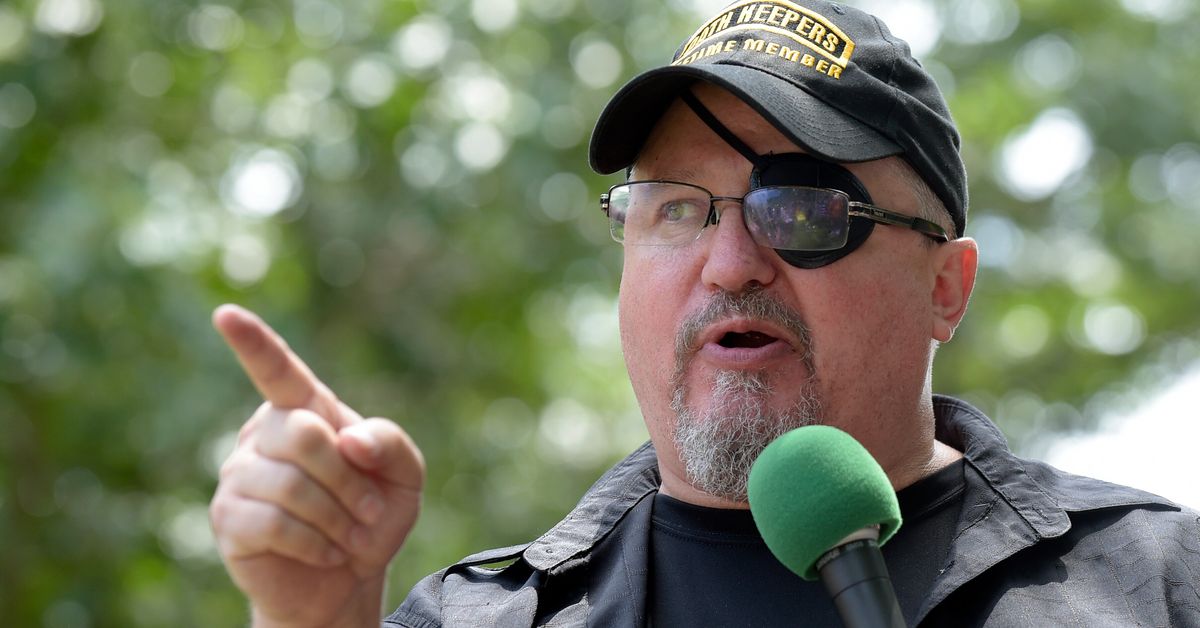 The man who founded the anti-government Oath Keepers group was found guilty of sedition for his role in the Capitol attack.

Adams explained how she wants people of every political stripe to understand that her estranged husband is not the man he portrays himself to be.

“He abused my kids, he abused me. He’s completely amoral. ... I do want them to understand that, too, so that he can’t just come back.”

Right-wing White men are not usually convicted of seditious conspiracy

In early February 1942, Attorney General Francis Biddle gave a speech before the Brooklyn Bar Association. The nation was newly at war, the attack on Pearl Harbor having occurred less than two months prior. The question at hand, then, was how the country might protect itself against internal threats.

“Traditionally America has always avoided the use of sedition laws,” Biddle explained to his audience. “We have believed that they express the use of star chamber methods which we have always disliked — the persecution by the sovereign of opinions not palatable to sovereignty.”

War changes the picture, he admitted. But he expressed confidence that interring “alien enemies” would backfire. There would, he said, be “many million Americans of German and Italian origin in our population who would be deeply shocked by and resentful of such treatment.”

Two weeks after he gave that speech, Biddle’s boss, President Franklin D. Roosevelt, signed an executive order forcing the internment of tens of thousands of people of Japanese ancestry. Biddle had mentioned that “tempers and dangers are highest” on the West Coast, but, 80 years later, it’s hard not to recognize the racial subtext.

The attorney general was right that the government doesn’t often level charges of sedition or seditious conspiracy against perceived opponents. That members of the far-right extremist group Oath Keepers faced such charges in the wake of the U.S. Capitol riot was a rare exception to that rule. But that two were convicted also highlights the other rarity at play, the one that overlaps with the subtext in 1942: There may not have been a conviction of White right-wing actors on such charges since the aftermath of the Civil War.

There have been convictions. A lengthy terrorism trial in the early 1990s resulted in the conviction of a group of Muslim men on charges of seditious conspiracy, among other things. Groups of Puerto Rican activists have been targeted on more than one occasion. In the early 1950s, for example, members of a group that plotted to assassinate Harry S. Truman were convicted on the same charge.

Then there were the indictments obtained during the administration of Ronald Reagan. In 1988, the New York Times noted that the Justice Department was “dust[ing] off an old law” — seditious conspiracy — to target violent actors. It mentioned various convictions of Puerto Rican nationalist groups, with an attorney for some of those targeted proclaiming that the law was used as “a way to criminalize political organizations” — unintentionally echoing Biddle’s concerns in 1942. The Times article also mentioned new charges targeting organizations on both the political left and the right. On the left, the paper wrote, the federal government was prosecuting members of a Marxist group called United Freedom Front. On the right, the target was alleged members of white supremacist organizations in Arkansas.

The trial in Arkansas resulted in acquittals across the board — by an all-White jury, as The Washington Post’s story at the time noted in its first sentence. The prosecutions of the United Freedom Front splintered, with one alleged member, Christopher E. King, pleading guilty to a seditious conspiracy charge. Other members of the group saw charges dropped, often because they were already in prison. Three others went to trial, with a jury acquitting them on sedition charges and being hung on other charges of racketeering and conspiracy.

The Justice Department under President Barack Obama obtained indictments for seditious conspiracy against a right-wing group called the Hutaree, alleging that the Michigan-based group had aimed to attack law enforcement as part of a plot to attack the U.S. government. Those charges, too, resulted in acquittal.

At the time Biddle spoke in 1942, there was a recent example of seditious conspiracy to which an observer might point: the effort to prosecute members of the right-wing, pro-Nazi Christian Front in 1940. Nine of those accused of plotting to overthrow the government were acquitted at trial, to the glee of right-wing radio broadcaster and priest Father Charles Coughlin. Five others saw their prosecutions end in mistrial.

It’s certainly fraught to extrapolate outward from a relatively small number of cases to broader trends. But there are certainly echoes of past indictments in the efforts of Oath Keeper founder Stewart Rhodes and Florida chapter leader Kelly Meggs on Jan. 6, 2021. The group had been planning to backstop Donald Trump’s presidency well before that date became a focus. Unlike other groups that faced seditious conspiracy charges, of course, Rhodes and Meggs were engaged in the effort to disrupt the government, participating in the events on Capitol Hill on Jan. 6.